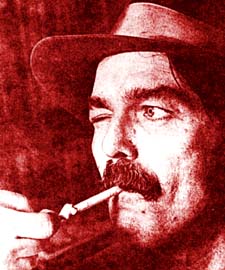 I once had a conversation with the good Captain. Someone in the band pointed out the fact that sitting at the back of the venue where we were playing – The Speakeasy, (just off London’s Oxford Street) was THE MAN himself.

After the gig, as we were loading the Transit, he stepped in a somewhat ‘tired and emotional’ manner over the gear and muttered, “Nice band.”

I think that constitutes a conversation.