"The Blues is pure emotion. As long as people have souls, they will feel the"

Zac Harmon is an award-winning guitarist, singer, and songwriter whose distinctive style continues the lineage of American Blues Music. Born and raised in the heart of Jackson, Mississippi, Zac Harmon is a true disciple of the music that emanated from the city’s historic Farish Street district, universally recognized as the home of such great blues legends like the late, great Elmore James. While in high school and college, Harmon gigged as a guitarist for the likes of Z.Z. Hill, Dorothy Moore and Sam Myers. Relocating to L.A. in the early eighties, he worked as a studio musician and then established himself as a writer and producer, crafting songs for the likes of the O’Jays, and Black Uhuru. Composing and performing music for a movie score, Harmon was compelled to pursue his longtime dream to return to his roots and record his first Blues project. The result was 2002’s Live at Babe & Ricky's Inn, an electrifying testimony to Mississippi Blues, which showcased the sound at its best and introduced Harmon as a true torchbearer for the “next generation of the Blues”. Zac Harmon isone of the leaders of the new roots and blues music revolution.          Photo © by Darren Carroll, 2019 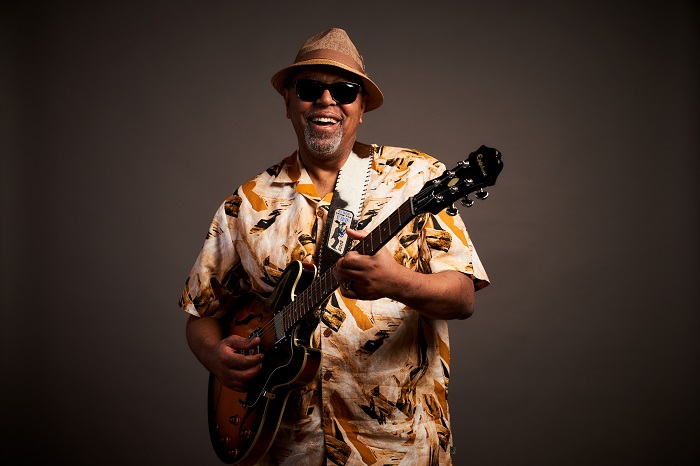 2007 saw Harmon named to the Blues Foundation’s Board of Directors and entering into an endorsement deal with Category 5 Amplification. Zac Harmon entertained U.S. troops in Iraq and Kuwait in 2008 as one the stars of Bluzapalooza and while headlining “The Pizza & Pyramid Tour” of Sicily, Italy and Cairo, Egypt in late 2009, Harmon and company made history with a rare performance at site of the Great Pyramid and the Sphinx, making the ensemble only the second Blues act to do so; Louis Armstrong being the first. Today Zac Harmon continues to tour both nationally and internationally as an ambassador of this great American classical music art form called the Blues. Catfood Records Will Release Award-Winning Blues Singer-Guitarist Zac Harmon’s Label Debut CD, Mississippi Bar BQ, on July 19. Produced by Grammy-winner Jim Gaines and recorded at Sonic Ranch in, Tornillo, Texas, Mississippi Bar BQ showcases 10 original songs, plus a killer cover of Dylan’s classic “Knockin’ on Heaven’s Door.”

As a kid, blues was all I heard around the house. My Dad played harp and loved Slim Harpo. So I heard a lot of Slim Harpo.

The first concert that I saw was Albert King and BB King. The first gig I played was in high school and the first song was Baby What You Want Me To Do by Jimmy Reed.

Everywhere I have traveled in the world, the blues has been a beacon of peace, understanding and good times. The blues is America’s most positive export. No matter the language, culture or creed, the blues is universal. This has greatly influenced my world view in a positive way because the blues brings out the best in people all around the world.

How do you describe "Mississippi Bar BQ" songbook? What characterizes new album in comparison to previous? 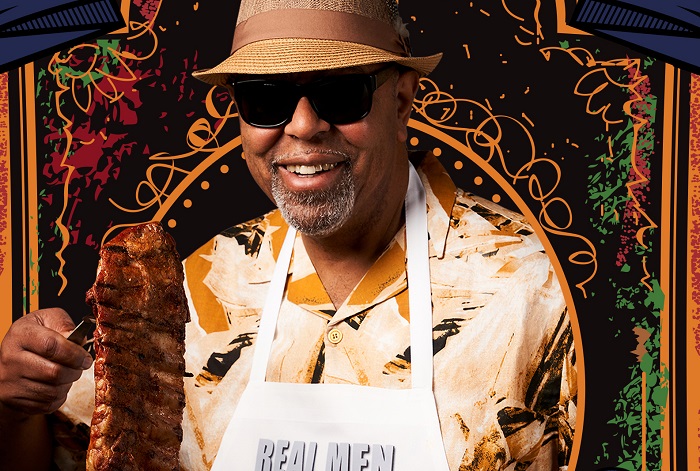 "I would not change a thing in the musical world because musicians are on the same plain throughout the musical world. I would only want the barriers that divide people in the world to be taken down so that the musicians can use their God given gifts to change the world." (Photo © by Darren Carroll, 2019)

What has made you laugh from "Mississippi Bar BQ" studio sessions? What touched (emotionally) you from Jim Gaines?

The relationship between the members of the Rays was quite a funny experience. They are truly a family of great studio musicians. There is never a dull moment.  Jim Gaines is the most humble super producer that you will ever meet. His approach to bringing out the best in you is like a father teaching a son to ride a bike for the first time. He is patient, understanding, loving, yet disciplined and skilled. I learned a lot about myself as an artist working with Jim.

I miss the days when blues was more common in America. When there were always 3 or 4 blues clubs in every town and it was a larger part of the musical mainstream in the US. My biggest fear is that blues will become more of a stage act than a creative experience. Audiences are being conditioned to except the blues from actors and not authentic blues artists. Blues is a cultural experience and if you are not part of the culture and have had the experiences that created the culture, you cannot authentically present the blues. You can only pretend.

I learned to never have preconceived ideas of acceptance and always trust the music.

Music is medicine. It is the healing power that will always bring people together. 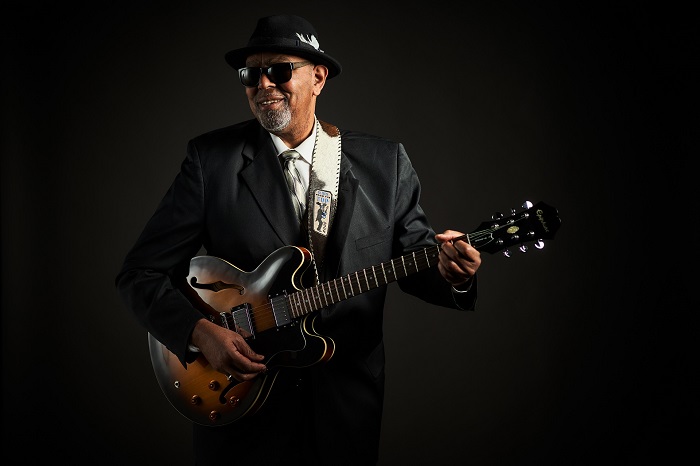 "I miss the days when blues was more common in America. When there were always 3 or 4 blues clubs in every town and it was a larger part of the musical mainstream in the US. My biggest fear is that blues will become more of a stage act than a creative experience." (Photo © by Darren Carroll, 2019)

The best moment of my career was playing with BB King. The worst is ongoing with the decline of blues music around the world from the original source.

Life is my source, and mentor for songs.

Do you think that your music and your songs, comes from the heart, the brain or the soul?

It’s all from the soul and heart. The soul is the window of the heart.

What do you learn about yourself from the music? How do you describe the philosophy of Zac Harmon’s music?

My music is like my fingerprints. It’s unique, it’s original, and it’s mine.

Are there any memories from ZZ Hill, Dorothy Moore and Sam Myers, which you’d like to share with us? 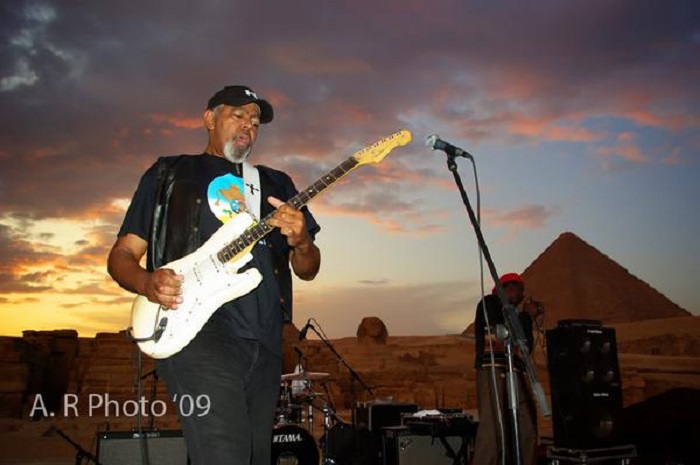 "Everywhere I have traveled in the world, the blues has been a beacon of peace, understanding and good times. The blues is America’s most positive export. No matter the language, culture or creed, the blues is universal. This has greatly influenced my world view in a positive way because the blues brings out the best in people all around the world." (Photo: Zac Harmon on stage, Cairo Egypt, 2009)

What's been their experience from Bluzapalooza in Gulf and your performance at the Great Pyramid and the Sphinx?

Bluzapalooza was an incredible experience. This tour proved to me that the Blues is loved all over the world. At the Great Pyramid, we performed for over 5 thousand Egyptians and they loved every minute of it.

Are there any memories from “THE ROAD WITH THE BLUES”, which you’d like to share with us? What do you miss most nowadays from Elmore James’ blues?

Yes but the only way I can share it is to play it for you live. Elmore James: That magical slide.

From the musical point of view is there any difference and similarities between the SOUL, REGGAE & BLUES?

It’s all the same. It’s from the African tree born of emotion.

The Blues is pure emotion. As long as people have souls, they will feel the blues. I wish everyone could experience this music.

What is the best advice to listen from the bluesmen? What advice would you give to all us for the “Keeping the blues Alive”?

To be true to yourself. Support the Blues whenever and wherever you can.

Do you have a message like an “ambassador for the Blues” and a Blues Foundation board member? 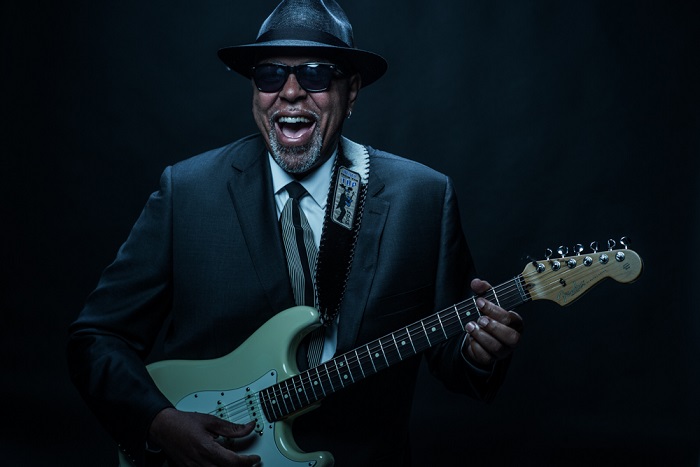