An Interview with artist/singer Bruni Sablan, a spiritual being, taking her energy and inspiration from Africa

“They all have their roots in Africa.  Just cultural that’s all. Music is Music.”

Bruni Sablan was born in Sao Paulo, Brazil circa the mid-20th century. Artistry has been her heritage. Her father Joseph Parello, of Sicilian decent, a civil engineer and architect, also painted. Her mother, Clo Parello, of Lebanese decent, was an accomplished classical pianist and beloved piano instructor for many years in the Northern California bay area. Bruni’s father introduced her to American jazz at a very early time in her life, she was five years old. At the same time, her Sicilian grandfather, Caetano Parello, was teaching her how to "see" art… He was a sculptor/painter himself. 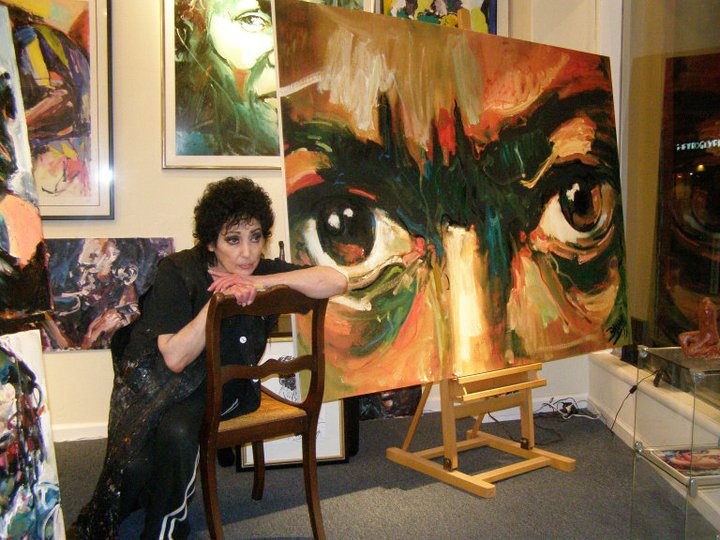 BRUNI and Miles Davis’ Eyes portait in her gallery at 1171 Lincoln Ave, San Jose, CA. "I got to meet him (Miles) and get a real close look.  It really got me going..."

Bruni grew up with art and music in her blood, and lived for a while in Los Angeles during a hazy, passionate time when the great Brazilian music masters had become prominent in the U.S.A. She sang and traveled with the likes of Joao Donato and Walter Wanderley. But, painting is what kept her "sane" during those turbulent years.

Today, as restless as ever, she continues her pursuit of painting "every great jazz musician who ever lived." Some of her tributes, such as Miles Davis, encompass more than two hundred and eighty canvasses. Bruni is a highly spiritual being, and feels she connects with the souls of her subjects, which results in a tremendously fast, energetic, and sometimes aggressive venture. This can leave her in a state of complete exhaustion. But, her energy and inspiration seem to get replenished endlessly.

I have been painting since I was a child, however, the desire to concentrate on musicians started around the mid eighties, when inspired by Jazz and Jazz Musicians.

What characterize the philosophy of your art, how do you describe Bruni’s songs, and music?

Color and emotion are what I am inspired by. 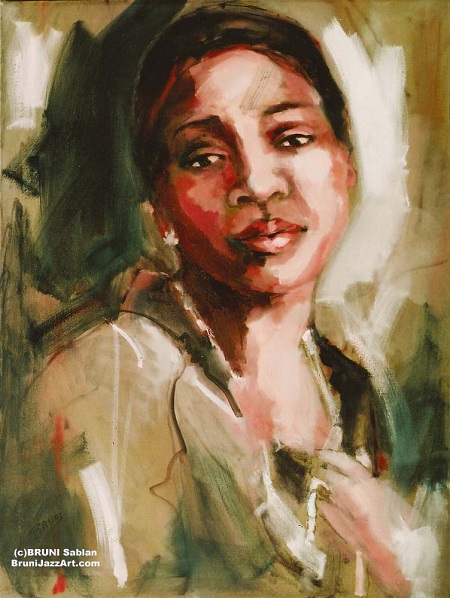 Jazz has been a part of my life since a child, and blues came to me a little later, through the inspiration of Bessie Smith, Etta James, Ray Charles, BB King, and so many more!

To me, being from Brazil originally, it would be like trying to explain why the SAMBA is eternal. Furthermore, Jazz and Blues are America’s Classical Music.

Paintings of Miles Davis stand out more because I’ve been inspired by him, and have painted Miles over 350 times. However, my “masterpiece” is a portrait of Bessie Smith.

From whom have you have learned the most secrets about the art and the music?

All kinds of music, from everywhere, and I am told that music does come out of my work!

Who from THE PEOPLE you have drew and paint, had the easiest pure original attributes for your painting?

MILES DAVIS.  He was made to be painted!

Miles Davis’ Eyes.  I got to meet him and get a real close look.  It really got me going….. "Africa is...the root of all that is great - absolute beauty, strenght and resilience. Blues is... Africa. Jazz is...like medicine for the soul."

Oh come on!!!! I’ve been painting for over 35 years, there are many moments and memories that make me smile!

They are all “difficult” and they are all “gifted” as far as I’m concerned.  If a subject doesn’t inspire me, I just don’t paint them!

It would be a very long list...so I'll just say Miles, Dizzy, Betty Carter, Carmen MacRae, Etta James, Ahmad Jamal, Shirly Horn, Michel Pettruciani...so many, they were all memorable.  When they carried Michel out of the piano, as they always did, i ran up and kissed his hand.  Dorothy Donagan loved her portrait so much (hanging at Yoshi's) at the end of her gig i ran up and gave her the painting ....I’ll never forget the look in her face when she said "you mean someone is actually giving me something"???

He was a very strict band leader, especially with the singers. He was very demanding, and expected complete professional dedication from us. Even forgetting lyrics was a big deal. Music was his life. Nothing else mattered much. I didn't really understand that until I became a virtuoso myself, and the obsession and dedication to painting took over my life from the early 80's to now. I was a kid then. He was also a very close friend and mentor and both he, and Joao Donato taught me that I should focus on painting, that I was a born Painter. BRUNI’s first show was as an under aged artist at Campbell Lounge  Jazz club in California. "Color and emotion are what I am inspired by."

Tell me a few things about your meet with Joao Donato and what's been their experience with him?

I met Joao Donato in the very late '60's probably '69 after I had worked with Walter Wanderley, through a mutual friend, by the name of FaFa Lemos. FaFa took me to meet Joao because they needed a lead singer for a new group they were hoping to start in L.A., it was a group that was supposed to be opening for Sergio Mendes. It didn't happen. The group that eventually did that was called "Bossa Rio", but I was no longer involved.

His music was very new to me at that time, and I was totally enchanted with it. It affected me in a way that was so intense, that I started to write lyrics to his melodies as a joke. One day he caught me at it, and told me he liked it because it wasn't "put on", so he gave me a bunch of music (on tape), and told me to go home and put lyrics to them. I felt very honored, so honored that I never asked if he intended to pay me for them...... which he never did. But I had fun with it, and I have no idea what he did with the lyrics. As I mentioned before, after that period, I never saw him again.

Who are the people that you’d like to meet face to face if those were alive, and talk to over lunch?

How you would spend a day with Etta James and Bessie Smith? 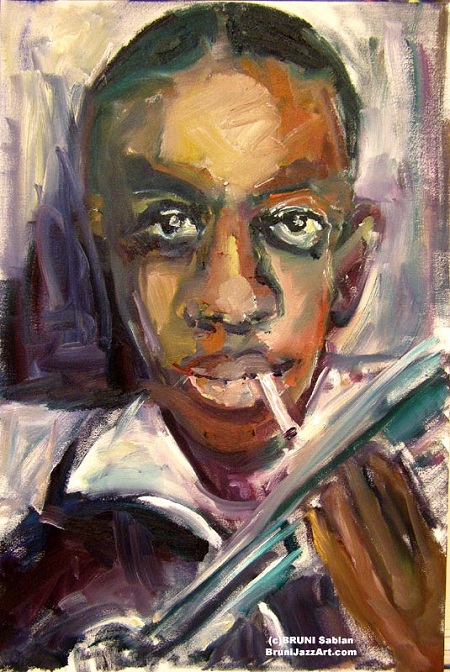 AFRICA IS…, TO ME, THE ROOT OF ALL THAT IS GREAT - ABSOLUTE BEAUTY, STRENGHT AND RESILIENCE.

HAPPINESS IS... KNOWING YOURSELF.

To Aretha and Janis, YOU MAKE ME FEEL!!!!  To Che? Vamos!!! Get started! To Bukowski? Love you Buk!!! Have read all your books twice!!!  Keep on writing wherever you are!

Yes I do.  It cannot ever stop!

Yes from the beginning since it originated it has been denigrated due to the fact that the root of both genres is African!

From the musical point of you what are the difference and similarity between Brazilian popular, Tropicalia & Bossa music with the Blues & Jazz music?

They all have their roots in Africa.  Differences?  Just cultural that’s all.  Music is Music. 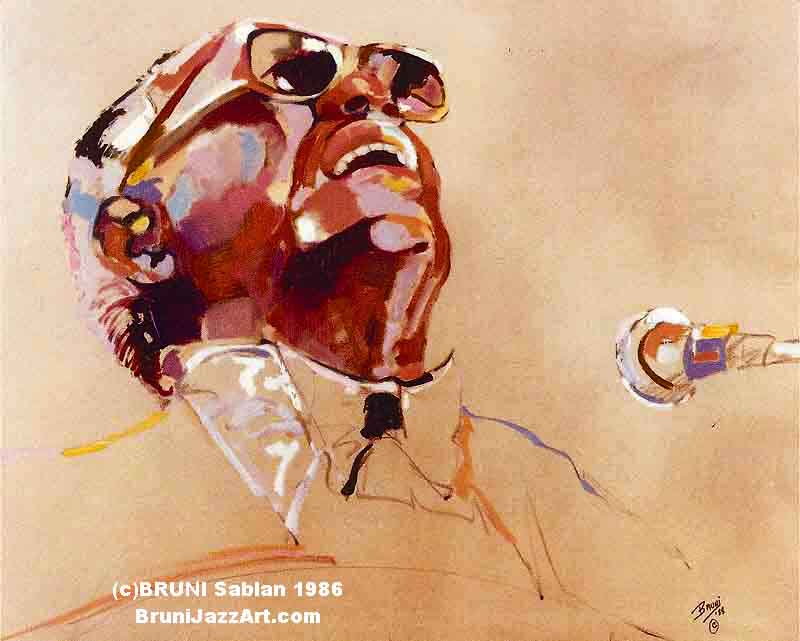