An Interview with Aussie acoustic musician Jack Derwin, delivers a blend of blues/jazz/roots with originality.

"Blues has a wider definition for me. It is black and yet white too."

Jack honed his skill as a musician in north western NSW Australia as a teenager. Arriving from the suburbs of Sydney at a young age, life was a challenge with being accepted as a “local”. This drew him to music, the most universal language of all. Acceptance was inevitable with Jack drawing from his new surrounds, with large open spaces of beautiful, yet often hostile countryside. Souring heat waves could easily turn into flood swept plains making life a challenge for those living off the land. 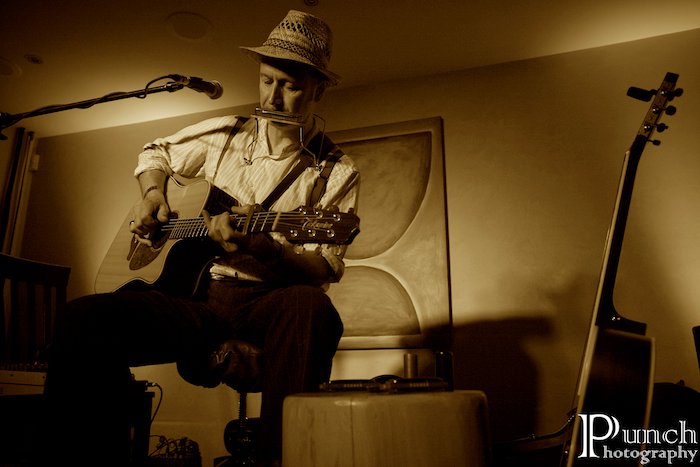 Jack has played with many different bands and combos over the years. The distinct similarity between all these combos is Jack’s style of playing and influence on these bands: Mostly the driving force, mostly upfront, and bold in presentation with guitar to match. He has a sound and style that seems to appeal to both the country folk, the sea dwellers and city folk alike. This appeal comes from the rawness and “roots” of his music. Jack on his own, is as good as with any combo. The music is raw and stripped to its bare necessities. Vocals, guitar, slide, blues harp and stomp box; synchronized together. Jack is a compulsive songwriter, recording at every opportunity, including his gigs, at home and in the studio. Searching and creating all the time.

Jack, when was your first desire to become involved in the blues & who were your first idols?
My first introduction to music was seeing the movie of Al Jolson’s life (a vaudeville act in the 1920’s) on TV as child. His soulful delivery of songs and voice impacted on me as a small child. Later it was the Beatles and in particular there bluesy side including songs like Oh Darling.  John Martyn from the UK ultimately gave me that acoustic blues/jazz addiction as an adult. 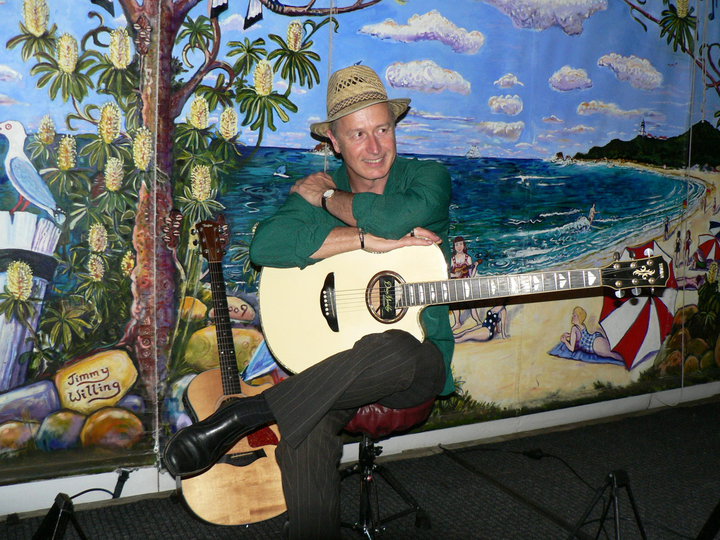 What are some of the most memorable gigs you've had? What were the first songs you learned?
The most memorable ones are usually the last ones! Including this year at the Phuket International Blues Rock Festival in Thailand and meeting and playing with other international artists.
First song on guitar was Peter Gunn, then I started writing songs when I was 14.

What characterize the sound of Jack Derwin?
In solo mode it’s the deep resonating vocals, along with acoustic guitar and resonator, blues harp and a stomping right foot on a miked up road case lid. Dynamics are important, highs and lows in the music.

Which was the best moment of your career and which was the worst?
Many good moments but touring New Zealand is always close to my heart even though I am an Aussie.
Also playing in “Bend” Oregon USA with other ex patriots in the audience. Worst one is having a drunken bum throwing a chair at me. I probably said the wrong thing when he requested a Creedence Clearwater song. 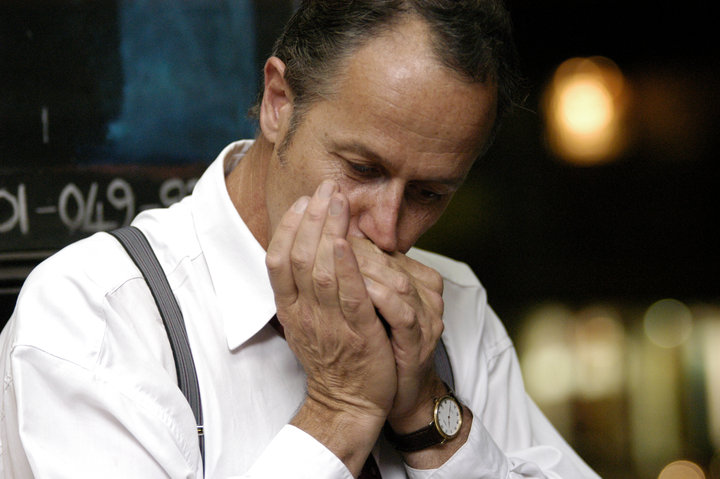 What does the BLUES mean to you & what does Blues offered you?
Blues has a wider definition for me. It is black and yet white too. Some of my favourite ones are white like John Mayall. It can be low down and dirty, yet light and jazzy too. Even country. It can be down and out but also with hope and positivity. Blues has given me the chance to be myself with writing and performing.

What experiences in your life make you a GOOD bluesman?
They say you need to be down and out with a number of years to make a good bluesman.
I have had my fair share, including a major motor vehicle accident many years ago which changed my life. Instead of being blue however, it made me grateful and optimistic for the future. It gives you another perspective on life and appreciation. 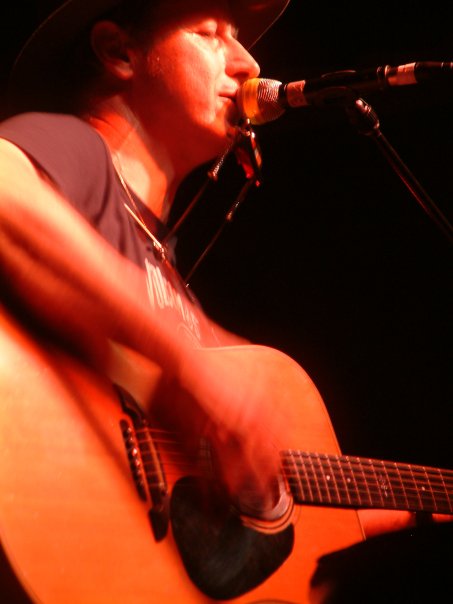 Alive or dead, who is the one person that you’d like to meet face to face if they were alive, and talk to over jam?
John Martyn

How/where do you get inspiration for your songs & who were your mentors in songwriting?
Uusally after travelling I find inspiration. New places, new people and new experiences.  Just being on the road.
Mentors : Lennon and McCartney. John Martyn.

What are the common factors of exhaling and playing the guitar?
Letting go of yourself. Handing it over to spirit.

Do you know why the sound of the slide guitar and harp is connected to the blues? What are the secrets of slide guitar?
The sounding resonates with slide and harp. It can moan, sing, sustain and shrill and imitate human emotion.
No secrets to the slide guitar. It’s a doing thing for each individual. I use a blue glass bottle neck slide on my National El Trovador resonator. Its more mellow than a brass one. However on my other steel string acoustic, I like the brass as it stings. Its in your own taste. Be simple with it though.

Do you remember anything funny or interesting from your shows in Germany & USA?
Germany: One gig was an old 700 year pub. Dark and smokey.  Music is universal. A lot of Germans couldn’t understand the songs, but the enthusiasm was there.
USA: The Americans are great to play to. They seem so enthusiastic and upbeat and welcome Aussies in a big way. A lot of songs came from one trip there and my album “Bend it” was taken from the town Bend, tucked away in Oregon. Magical town and beautiful country side. I played to many audiences from Australia there too. One American thought he could hear the digeridoo in my guitar which was interesting. I still ponder that one. Do you think the younger generations are interested for the folk blues?
I see more and more. Especially seeing younger performers at recent festivals.

From whom have you have learned the most secrets about blues music?
Old ones like Robert Johnson, Skip James, but also John Mayall and Eric Clapton with there “white” interpretation.

Some music styles can be fads but the blues is always with us.  Why do think that is? Give one wish for the BLUES
I play the blues, cause it is ageless. In fact the older you get, the better you get at it.  I don’t need to wish success for the blues, it will always be around in some shape or form. 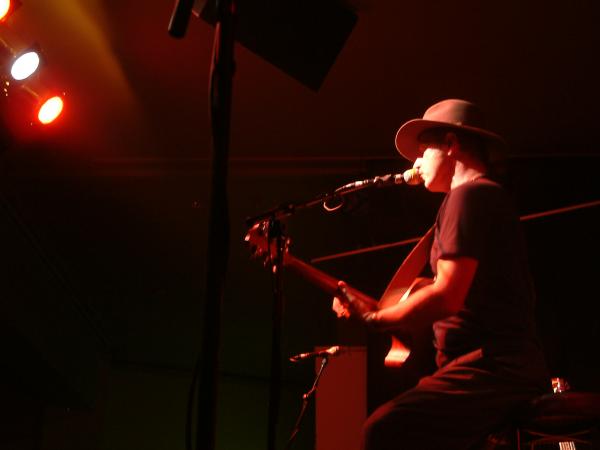 What advice would you give to aspiring musicians thinking of pursuing a career in the craft?
Play from the heart. Dig deep and find soul and feeling in your playing and singing. Let it evolve and don’t push it too hard.

Any of blues standards have any real personal feelings for you & what are some of your favorite?
I wrote a song many years ago called “With My Eyes” which really isn’t a typical blues song. But in recent years I have come to realize it essence is very close to “Crossroads”….Maybe most blues songs are.
For me its not so much the  favourite, but who is doing it. John Martyn does an amazing version of Jellyroll. Rest his soul.

What are some of the most memorable gigs you've had?
Usually touring. I love touring up the far north coast of Australia around Byron Bay. It always feels festive there with international visitors. It’s a bit alternative, sunshine, beaches, hippies, and digging what you play.
New Zealand gigs are great too because they seem to LISTEN to you! 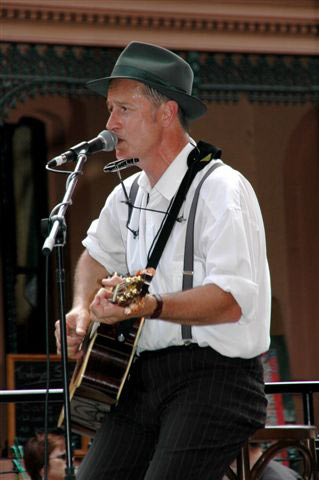 What would you ask Bob Dylan & Donavan?
Can I jam with you???

How you would spend a day with the Creams and John Mayall?
Surely playing music with them! I know enough of their history already.

What is the “think” you miss most from the “Old good days of Blues”?
I guess one of the most inspiring times was the “British Explosion” of blues in the 60’s where a lot of acts from the UK impacted on the world with blues. I think it also help traditional blues artists in the USA another kick start too with the interest. It seemed to be an exciting times. Even commercial artists in that time played the blues. I mean who played the blues better than Hendrix??

Is there any similarity and difference between the folk blues and the modern electric blues?
Both still should come from the heart. The formats are similar. The instruments will obviously make it different to each other. I like the fusion of acoustic and electric even within the same song.

I've heard two sayings about the blues, which are a little bit confusing. One is "Blues is a healer". Another one "You have to feel blue to play Blues". If it's suppose to be a healer, why should it make one feel sad?
I associate blues a bit in the same way as Gospel music. If played in the right manner, regardless of  the lyrics, it will inspire you and uplift your spirit. It has to be played that way or it sounds fake. Not every one can play the blues that way. In that case, its not for them.  Mind you, not all lyrics in blues are about wanting to be healed.  In some, the healing has already been done. I call that the “Happy Blues”! 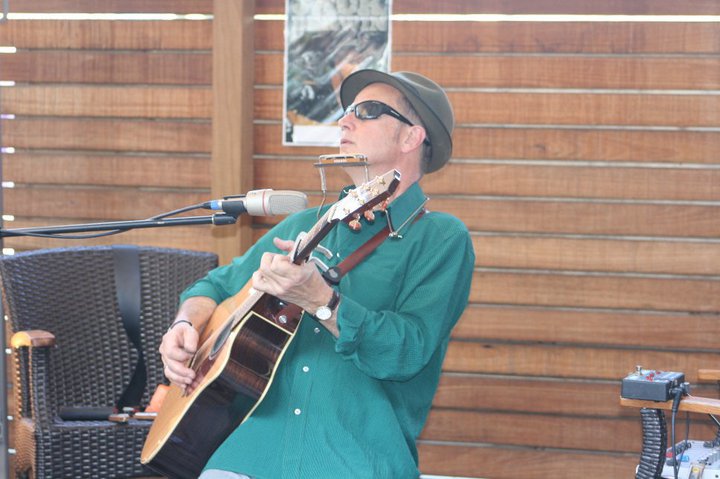