"Blues is so absorbing, so mysterious and makes you feel so good, playing or listening."

Léo Maier is a Brazilian guitarist and singer that started to play guitar when he was fourteen. When he was sixteen, Leo started to play in local rock bands and his first masters were Jimi Hendrix, Slash, Jimmy Page and Ritchie Blackmore. Classic records from Stevie Ray Vaughan, Albert King, Freddie King, Buddy Guy, Muddy Waters and Lightnin’ Hopkins were a first step into a lifelong passion for blues and by the time he was nineteen, Leo was hooked. Léo Maier released his second EP "Guitar In My Hand" in 2016. 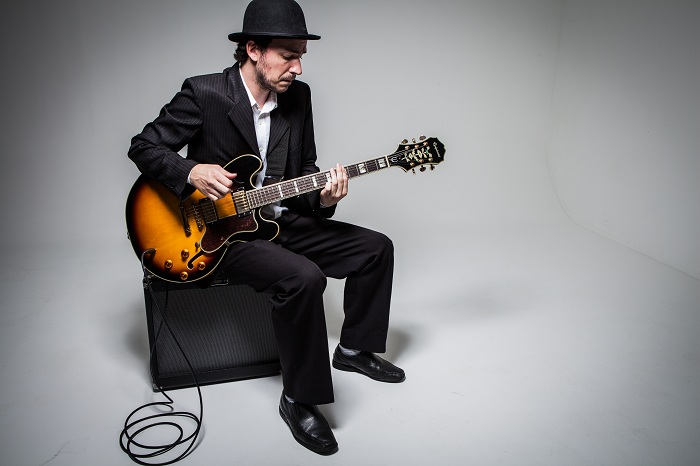 When was twenty, Leo began his studio recording experiences as a side musician for local artists while at the same time he recorded some Blues demos that consisted of Howlin’ Wolf, Elmore James and Robert Johnson songs. In 2009, he decided to make his name and formed the Léo Maier Trio and Quartet that goes from the traditional Blues, Jump Blues, jazz standards, and soul tunes to other genres.  As a solo artist, Leo is actively involved in the Southern Brazilian blues scene, participating in regional blues festivals and events. Léo travels with his band periodically, works as a guitar teacher, sideman and loves to share the Blues in schools for the children and other related volunteer work.

I learned that you can express anything through the music; if you’re happy, if you’re in trouble, if you want to say something to that special girl... I also learned that I can make people happy with my music. To me, Blues means truth, freedom and passion.

What were the reasons that you started the Blue/Rock researches and experiments?

I don´t know if there were a reason or more. Maybe the love for the Blues. You know, when you start to listen to the Blues, and hear those great stories and advices, it´s natural to wonder where it all comes from. I started with Rock (listening, playing, reading books and magazines), then went to the Blues and always enjoyed reading the liner notes of vinyl’s and cd´s. The mystery, who influenced who, the regions and the styles that developed there, the tones, the magic sounds and the stories behind the recordings etc. etc. etc. Man, there´s a lot to research!

How do you describe Léo Maier sound and songbook? What characterize your music philosophy?

My sound is what I love to listen to and what I’m feeling at the moment. About the philosophy, I just have to say that music is feeling and you got to play with your soul. Practice hard and don’t try to imitate other musicians. Being you is the best way to touch people’s hearts. 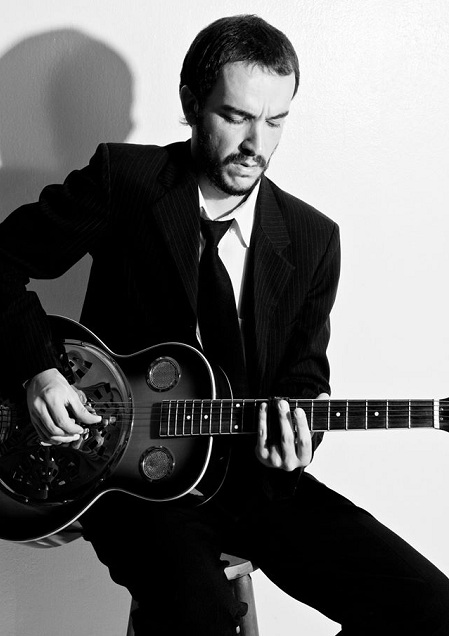 Blues is so absorbing, so mysterious and makes you feel so good, playing or listening. And of course, Blues is the founding father and root source of the majority of the modern genres we know today and I feel like people have a deep desire to really get know their roots.

"I miss the natural thing, the real thing. I miss the personality that all the old cats had. " (Photo by Mariana Florencio)

I saw some amazing gigs here in Brazil. Buddy Guy, BB King, Eddie C. Campbell, Junior Watson, Bob Stroger, Kim Wilson, James Cotton and other masters. For me, to watch this guys is the best learning experience. Some of the best advice I’ve ever received: play for/with your band and not for you. Your instrument isn’t the most important, the music is.

Are there any memories from BB King, Eddie C. Campbell, and James Cotton which you’d like to share with us?

So many memories, but I´ll pick one, from the BB King concert (São Paulo, Brazil) in 2006. He was playing "Guess Who" and then he asked the audience that we kissed each other. I kissed my girlfriend, of course. Then he turned his attention to the guitar again and played beautifully. I said to my girlfriend: "Baby, I love your kiss, but those BB King licks are the best kisses I could have" We started to laugh a lot! She knows about my love for the King and his music.

I miss the natural thing, the real thing. I miss the personality that all the old cats had. I’m too afraid of technology. You can’t make real music with buttons and effects…

People listen to a lot of bad music, plastic music. If I could, I would make people pay more attention to musicians who make music for the love of making music and not to attend a certain market that focuses on passing trends. 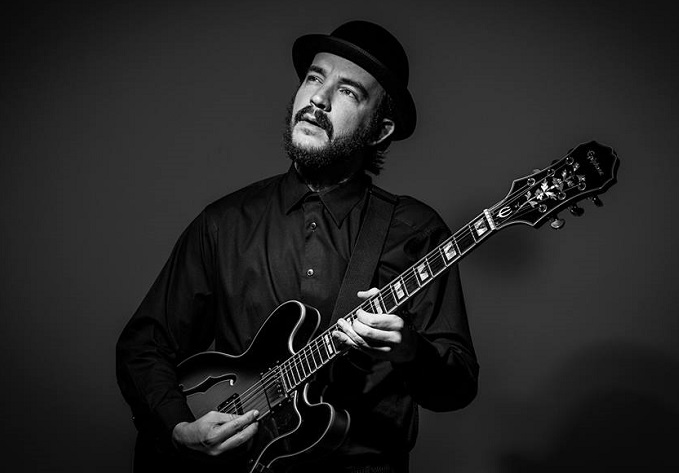 "I learned that you can express anything through the music; if you’re happy, if you’re in trouble, if you want to say something to that special girl... I also learned that I can make people happy with my music. To me, Blues means truth, freedom and passion." (Photo by Mariana Florencio)

Are there any memories from gig, jams and recording time which you’d like to share with us?

There’s a lot of great moments on the stage or in studio. I love to play with my friends, great musicians that walk with me. It’s very hard to find one moment only.

There have been several great moments in Brazil’s “Blue’s History”, but in my opinion, I would consider the current Brazilian blues scene as the ‘Golden Era’, as there are a wide array of new styles and artists popping up every day and the scene is growing in quality, following, and interest.

Like a majority of the world, the classic rock artists like Rolling Stones, Creedence, The Doors, Led Zeppelin, and Eric Clapton who have heavy blues influences opened the eyes of the Brazilian population to a whole world of legendary Blues artists.

I really love to see new artists and the younger generation discovering themselves in Blues and carrying on the tradition in the local music circuit. 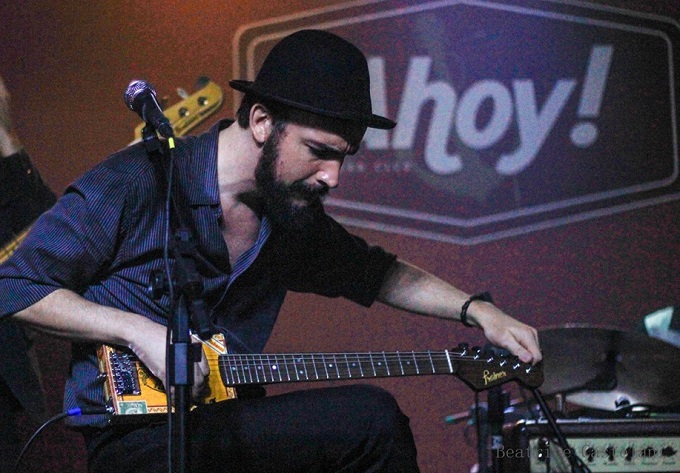 "In my opinion, the Blues and the artists helped many barriers be broken. The musicians didn´t want to play to segregated audiences no more. Music helps change old thoughts and brings people together." (Photo by Beatrice Castelani)

Are there any similarities between the blues and the genres of local Brazilian folk music and traditional forms?

We have "roots music" here like Baião, Samba, Chorinho etc. Harmonically, I don´t see many similarities and the rhythms are very different. But if you pay attention on the lyrics, you will see that the poetry, the stories, the way of life and desires are close one from another. You know that these people had a hard life. The music helped them to endure and conquer many things.

In my opinion, the Blues and the artists helped many barriers be broken. The musicians didn´t want to play to segregated audiences no more. Music helps change old thoughts and brings people together. "Dope" by Clarence Gatemouth Brown or "Double Trouble" by Otis Rush, Muddy Waters at Newport (1960) and BB King Live in Cook County Jail etc. There are so many great moments and songs in the Blues history.

I wish I could spend a Day in the life of Chess Records Studios, especially if it were on a day when Muddy Waters, Howlin’Wolf, Little Walter, Jimmy Rogers, Buddy Guy and other great artists were recording. 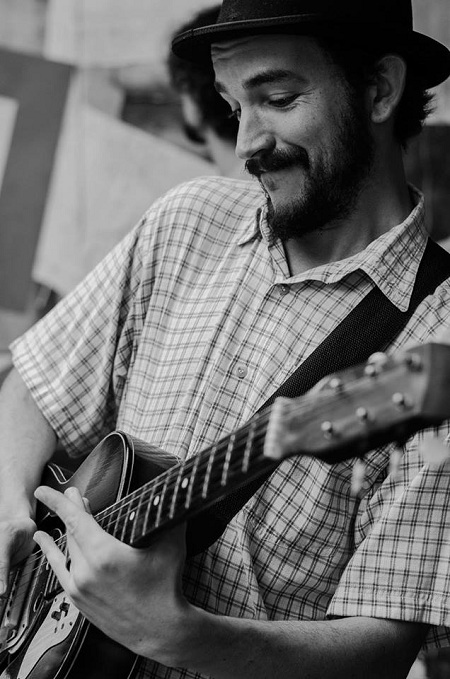 In Blues, the older you get, the better.  The more experience you have and the more intimacy you have with your instrument, the better.

"My sound is what I love to listen to and what I’m feeling at the moment.
About the philosophy, I just have to say that music is feeling and you got to play with your soul."

What is your "Blues Dream"?

My Blues Dream is to get to be ninety years or older and continue carrying on the Blues tradition.

My greatest happiness is to see Blues being loved, listened to, respected and played by more and more people around the world.