"Blues is straightforward, honest music that taps into inner emotions and puts them into songs.  At the same time, it is deceptively simple and very skilled."

In the deep, dark woods of Canada, somewhere in the middle of nowhere, there is a dilapidated cabin. Illuminated only by a single gas lantern and a wood stove, the frontman of garage-punk, underground legends Forbidden Dimension and the three members of twisted roots-music cult-heroes Agnostic Mountain Gospel Choir compose haunting and raucous tales of death and mystery. 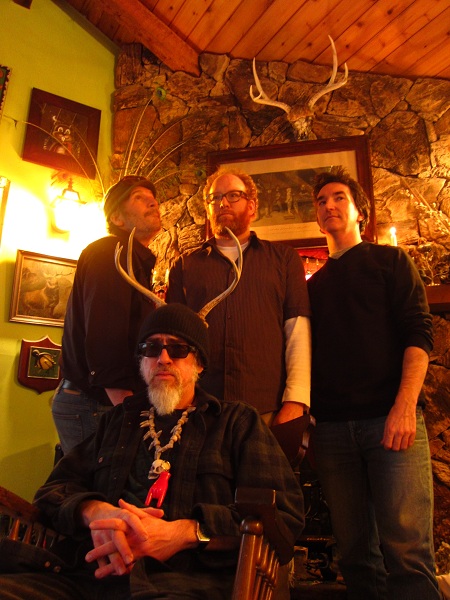 The unlikely collaboration started when the AMGC went on hiatus in 2010 and guitarist Bob Keelaghan found the exact location where Forbidden Dimension’s mysterious singer/ guitarist/ tunesmith Jackson (Tom Bagley) Phibes had decided to turn his back on humanity. From there, he tracked him to a cabin in the woods. There were rumours why Phibes had become reclusive, ranging from a mental and financial meltdown to deteriorating health. Keelaghan had to investigate what was up and see if Phibes would be interested in recording again.
As it turns out, Phibes was hard at work on new Forbidden Dimension material when the AMGC guitarist — along with bassist Vlad Sobolewski and drummer Jason Woolley — had found him in his remote shack. At first, Phibes was suspicious, belligerent, and suffering from ailments brought on by a steady diet of squirrels. After a persistent badgering, Phibes was satisfied that they were sincere musicians with chops to boot. He agreed to collaborate on an album backed up by members of the AMGC.

When was your first desire to become involved in the music & who were your first idols?
Bob: I think I wanted to play music when I was a child. At the time, my idols would have been the Beatles or Led Zeppelin.  Also, my brother James was pretty important because he was already playing guitar and singing. Sometimes I would sit outside his bedroom and listen to him practice.
Tom: I wanted to be a chartered accountant, but my mom wanted me to play the Dirty Guitar, so it’s what I had to do. In truth, my older brother brought home a copy of “Desolation Boulevard” by Sweet, and that was the first record that made me really want to figure out “how it’s done”. Before that, I really enjoyed stuff like the Neil Hefti “Batman” record, and songs such as “Baby Elephant Walk” by Mancini, and “Casino Royale” by Burt Bacharach, songs that were in my father’s record collection that had all the “right notes”. What does the BLUES mean to you & what does music offered you?
Bob: To me, blues is straightforward, honest music that taps into inner emotions and puts them into songs.  At the same time, it is deceptively simple and very skilled.  You can’t play blues and fake it. You either have the connection or you don’t.  It is also the most influential music of the 20th century.
Tom: Blues is the foundation and template for all the pop-based music that I enjoy, from metal to surf to garage rock and European soundtrack music to later punk styles. Even if it’s not evident at first, it forms the patterns of repetition that exist within the song structure upon which you hang your hooks or even your discordant riffs. You play with it or against it, but it is still the underlying skeleton.

How would you describe your contact to people when you are on stage?
Tom: A warm sort of icy cold. I like to instill a feeling of cheerful disdain and pleasant menace. Which was the best moment of your career and which was the worst?
Tom: A good moment for me was playing at the opening party for the FUBAR 2 movie in 2010 with my other band, Forbidden Dimension, and realizing that the out-of-control psychopathic audience in attendance thought we were really cool. They had been heckling and throwing full cans of Pilsner at people karaoking to Maiden before we went on.
With the Rhythm & Blood Consp., I’ve really enjoyed playing at some of the local outdoor festivals. A much different experience than being stuck in the sweaty punk bars! I haven’t really had any bad experiences, except maybe when the audience forgets to show up for the gig occasionally, but I still usually have a good time.

How do you characterize your music philosophy …and Agnostic - Phibes Rhythm & Blood Conspiracy’ music?
Bob: I would say it is musically fun, but lyrically dark.  The whole idea of the band is to find a middle ground between what Phibes does in Forbidden Dimension and what Jay Woolley, Vlad Sobolewski, and I did in Agnostic Mountain Gospel Choir.  I think we found an interesting style that goes where neither of those bands did. 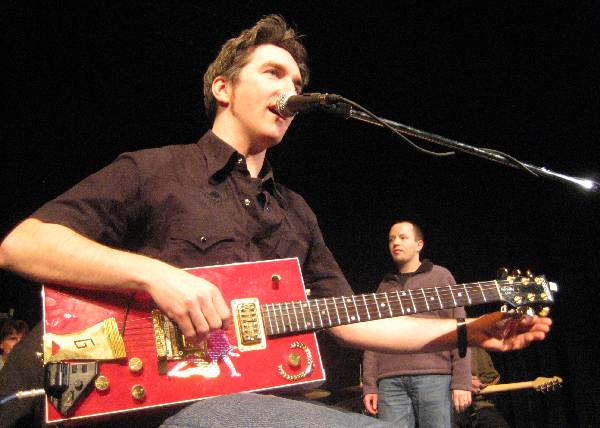 Cool band name. How did you come up with it?
Tom: I always think it’s too long and complicated for folks to remember. It’s a mash-up of the Agnostic Mountain Gospel Choir and The Jackson Phibes Rhythm and Blood Conspiracy, a name I used on an obscure 7”, “Old Devil Moon”, from 1998. “Old Devil Moon” would actually be a better band name, now that I think about it!

Some music styles can be fads but the blues is always with us.  Why do think that is?
Bob: I think it is because it is the root of so much popular music made in the 20th century and beyond: country, rock, jazz, funk, etc.  Even electronic pop music is riddled with pentatonic riffs and melodies.

Where do you get inspiration for your songs, what musicians have influenced you most as a songwriter?
Bob: For this band, a lot of the inspiration comes from the news and ghost stories.  Both of those are rife with horrors.  As far as songwriting influences go, I don’t know.  There is a lot that my brain has absorbed.  In AMGC stuff, I would have attributed a lot of style to Skip James and Charlie Patton; people like that.  The songs I wrote on the Agnostic-Phibes CD delve more into storytelling than I’ve done in the past. So, those influences could be anything from Leadbelly, Steve Earle, Nick Cave, or Primus. I do not really know. A good story is a good story. 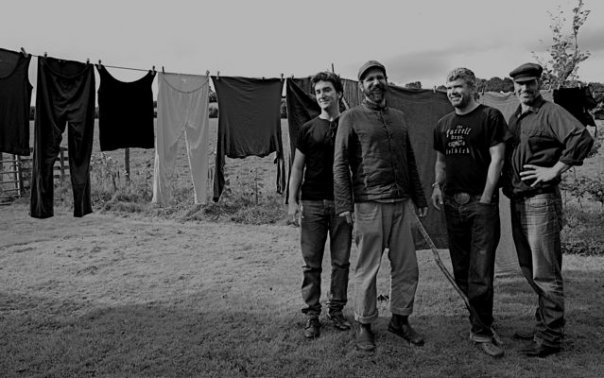 What do you think is the main characteristic of your personality that made you a musician?
Bob: Probably my penchant for nonconformity and general mistrust of authority.
Tom: I’ve got a tiny bit of a hambone streak in me. I like being a solitary man much of the time, but it’s fun to go out and act like an idiot in front of people for a brief period, get some applause, and then disappear back into my hole.

What would you say to Johnny Cash? What would you like to ask Link Wray?
Tom: To Johnny Cash, I’d say, “My god, I thought you were DEAD!” And probably the same with Link Wray, although I’d ask him what was up with letting his wife play with his damn ponytail on stage all the time… didn’t work so good in the stage-presentation dept. Nothing but complaints, but maybe that was just the rebellious punk spirit in him letting that happen so it would piss-off sectors of his listening public. 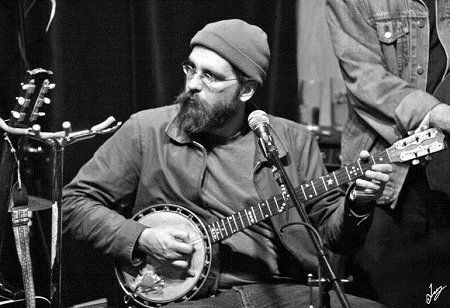 What advice would you give to aspiring musicians thinking of pursuing a career in the craft?
Tom: Keep it on a hobby level and you will have more fun and enjoy it much longer than if you set out to try and make a career of it.

How you would spend a day with Johnny Cash? What advice would you give to Screamin Jay?
Bob: To Screamin’ Jay I would say, “Try using a condom, why don’t you. And don’t make shitty records in the 70s and 80s.” I’d probably spend a day with Johnny Cash coaxing him through drug withdrawal. That’s just the way my life goes. I wind up doing social work.

What the difference and similarity about “the way of thinking” between the Punk and Blues?
Bob: The similarity is that they are both emotionally direct forms of expression played with a lot of intensity.  The skill it takes to play either style well is often downplayed.  Of course, there are a lot of phony versions of both styles, too, that are not very sincere. In that regard, both are easy to parody and get by with clichés.
The obvious difference is that they came from different cultures in different eras.  Punk was indirectly influenced by blues. 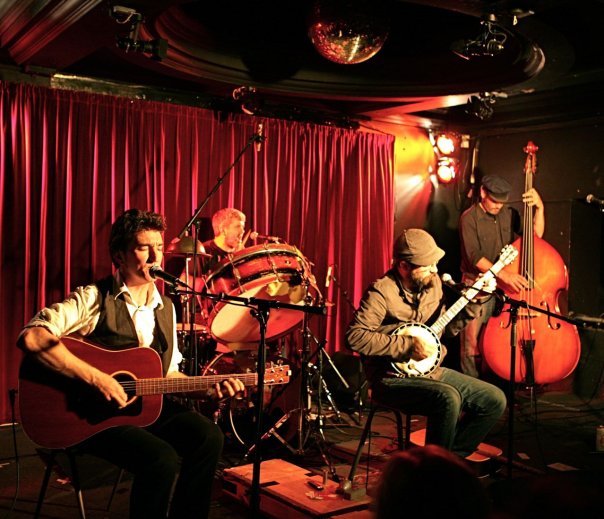 What is the “feel” you miss most of the Son House and Howlin Wolf’s blues nowadays”?
Bob: I think the primal urgency of their music is gone from a lot of popular blues.  Both of them were downright frightening as singers.  I can’t think of too many contemporary blues singers I would call frightening.
Tom: I agree. I think that the true sprit of those performers ends up shining through perhaps in different forms of music, such as more punky-oriented recordings. It’s like, sorry, but the best blues records of the 80s were NOT Robert Cray’s, but the Gun Club’s. Or maybe Venom’s.

What turns you on? Happiness is……
Tom: Having a clean slate.