Interview with John Fry of Ardent Studios, Memphis TN: Perhaps our secret is that we do not have a fixed sound.

"Good music is emotional communication, and it offers all the range of human emotions."

Ardent Studios is a recording studio located in Memphis, TN, was founded by John Fry and was initially a studio in his family's garage, where he recorded his first Ardent Records 45's. In 1966 the operation moved into a new store building on Memphis' National Street, which was shared with a bookshop. The original equipment came from the garage operation: Altec tube console, Ampex 2-track, Pultec EQ and Neumann mics - some of which are still in use today. Tom Dowd was consulting with Auditronics on an early multitrack console for nearby Stax Records, and Fry ordered the same input modules for his second board. Next came a Scully 4-track, the first EMT plate reverbs in the area, and the beginnings of a world class collection of gear. Ardent became home to young producers and engineers such as Jim Dickinson, Terry Manning, Joe Hardy, John Hampton, Paul Ebersold, and later Skidd Mills, Jeff Powell, Jason Latshaw, and Pete Matthews.

In 1971, Ardent Studios moved to its present location on Madison Avenue, followed by the acquisition of 24-track recorders, bigger consoles and more gear. Today Ardent has three studios equipped with large format Neve and SSL desks alongside Pro Tools rigs, and is managed by Jody Stephens (also drummer for Big Star) - an early Ardent group who's first two albums appeared on Ardent Records label in the early 1970s. All three Big Star albums were named in Rolling Stone's Top 500 albums of all time, and “In The Street,” from their first album, became the theme for “That 70s Show.” Early on the studio recorded Sam & Dave, Led Zeppelin, Isaac Hayes, Leon Russell and The Staples Singers, and in the 1970s, 1980s, and 1990s recorded James Taylor, ZZ Top, R.E.M., George Thorogood, The Allman Brothers, Bob Dylan, Isaac Hayes, B.B. King, and Jimmie and Stevie Ray Vaughan. In the 2000s younger artists such as The White Stripes, 3 Doors Down, Cat Power, North Mississippi Allstars, The Raconteurs have recorded at Ardent, and the soundtracks for Hustle and Flow and Black Snake Moan were produced at Ardent as well. About 20% of the Stax catalog was recorded at Ardent and every major Stax artist has recorded there other than Otis Redding who died in 1967.To date, Ardent has recorded over 70 gold and platinum albums and singles. 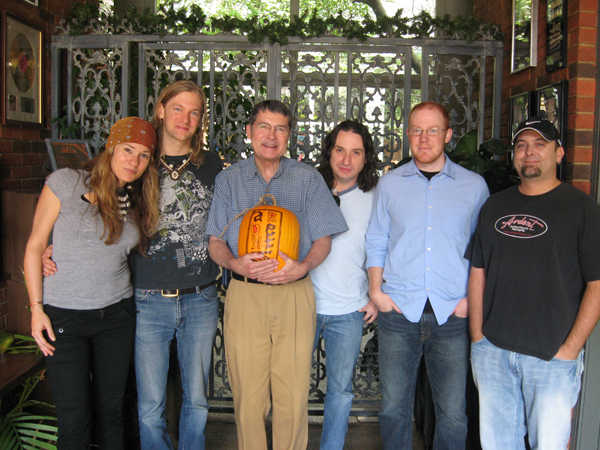 Fry has engineered and produced a plethora of records, many for Stax, but is mostly known for his work on the first three Big Star albums and as the band's mentor.

When I was 13 I became interested in radio and TV and wanted to know how they worked. I also loved the music they brought to me. I learned electronics and with friends built a home radio studio. We then discovered that our equipment could also be used to record music and we started to record local bands. The first Ardent 45 was issued in 1959. The best was getting to record a band called Big Star in the 1970s. The worst was when Stax went out of business in the 1970s, and it looked like Memphis music was coming to an end.

What does the music mean to you & what does music offered you?

Good music is emotional communication, and it offers all the range of human emotions.

What do you learn about yourself from music? Which is the most interesting period in your life and why?

When you are recording, you must keep a distance, like the doctor and the patient. Only later can I enjoy the results. I think the most interesting periods have been the 60s, 70s, and today.

I remember many things which are too long to relate by phone. When you put people into a studio every human emotion comes forth – anxiety, joy, pain, excitement, fear, and on and on – so many stories in 45+ years... "These are very difficult and rapidly changing times. Hold fast to your roots. Learn the new technologies, but dot not be captivated by them. Don’t quit your day gig."

My most memorable recordings are the 3 Big Star albums from the 70s, all of which made Rolling Stone’s list of 500 Best Albums of All Time. I laughed really hard Monday when the sewer backed up.

Are there any memories from studio with all GREAT MUSICIANS, which you’d like to share with us?

All the Stax players were great, especially Booker T & The MGs, also Leo Russell and his LA guys, and Huey Lewis & The News.

Of all the people you’ve meeting, who do you admire the most?

Some music styles can be fads but the blues & soul are always with us. Why do think that is?

These come from deep within the soul and spirit and endure. Tell me about the beginning of ARDENT STUDIO. How did you choose the name and where did it start?

I related this at the start. We chose the name Ardent because in English it means “hot, firey, firece, burning, passionate".

Why did you think that ARDENT STUDIO continued to generate such a devoted following?

We have continued to train new generations of young engineers and producers who share the original vision.

What was the secret of the ARDENT studio? What characterizes the sound of Studio?

Perhaps our secret is that we do not have a fixed sound. We have the ability to convey what thartist and producer want to get across without limitations.

In which albums can someone hear the best of ARDENT’s work? How do you describe the sound & progress of studio?

In over 45 years, there are just too many to give a clear answer. There is a discography on our web site at www.ardentstudios.com which is arranged by date. Your readers can decide on their own favorites. "I hope we are going back to authentic music that is made by people rather than machines. Music sales are down because the consumer is bored by what the big labels offer. It is without humanity, emotion, or soul."

The members of the band Big Star, and among them, Chris Bell in particular.

How do you see the future of music? Give one wish for the ARDENT STUDIO

I hope we are going back to authentic music that is made by people rather than machines. Music sales are down because the consumer is bored by what the big labels offer. It is without humanity, emotion, or soul.

My wish for Ardent is to continue serving artists who want to make real music.

What is the “thing” you miss most from the OLD DAYS; make an account of the case of the ARDENT?

I miss the relative simplicity of the recording process, although for many artists this seems to be returning. Bands want to play live in the studio again and even let a little mistake come through rather than use auto tune.

Obviously, it has changed in every way. The recording technology is totally different and advanced. The major international labels have risen to dominate and recently fallen into ruins, leaving an uncertain future for aspiring artists. The economy of the business is more difficult today than it ever has been in my memory. "I remember many things which are too long to relate by phone. When you put people into a studio every human emotion comes forth – anxiety, joy, pain, excitement, fear, and on and on – so many stories in 45+ years..." (Photo: John Fry, Jody Stephens, John Hampton and Jim Dickinson)

How did you first meet Jim Dickinson & Jim Gaines? What is the word "seal" of the work they have made?

Jim Dickinson was the first record producer I ever worked with, back in my home studio days starting around 1964. He came to work at Ardent until 1968 when he went to Miami to join Atlantic’s Dixie Flyers rhythm section. He was my friend d colleague all his life, and I miss him very much.

I met Jim Gaines when he was an engineer at a local radio jingle company. He moved on to doing record engineering and production, moved to the west coast for a while, and when he returned to Memphis, did many album projects at Ardent. Jim is another lifetime friend and colleague, and we expect him in the studio in January.

Would you mind telling me your most vivid memory from Led Zeppelin’s recording?

Terry Manning did the portion of that album which was done at Ardent, and I have no LZ stories.

We recorded the 8 best selling ZZ Top Albums and one Allman Brothers album, produced by Tom Dowd, Terry Manning, Joe Hardy, and Joe Hardy did the ZZ work. Jeff Powell engineered on the Allmans. I might be able get a story out of them. "We have continued to train new generations of young engineers and producers who share the original vision." (Photo: John Fry & ZZ Top)

What do you think of SOUL music & how close is to BLUES?

I am not a music historian, but souls is obviously derivative from blues, so the two are connected forever.

Tell me a few things about the BB King & Booker T’s recordings.

We did the BB King Blue Summit Album. Everything was tracked live, rhythm section, horns, vocals. Two songs were done each day.

What do you think is the characteristic of your personality that made you producer & supporter of southern music culture?

I loved what I was doing and I still do. 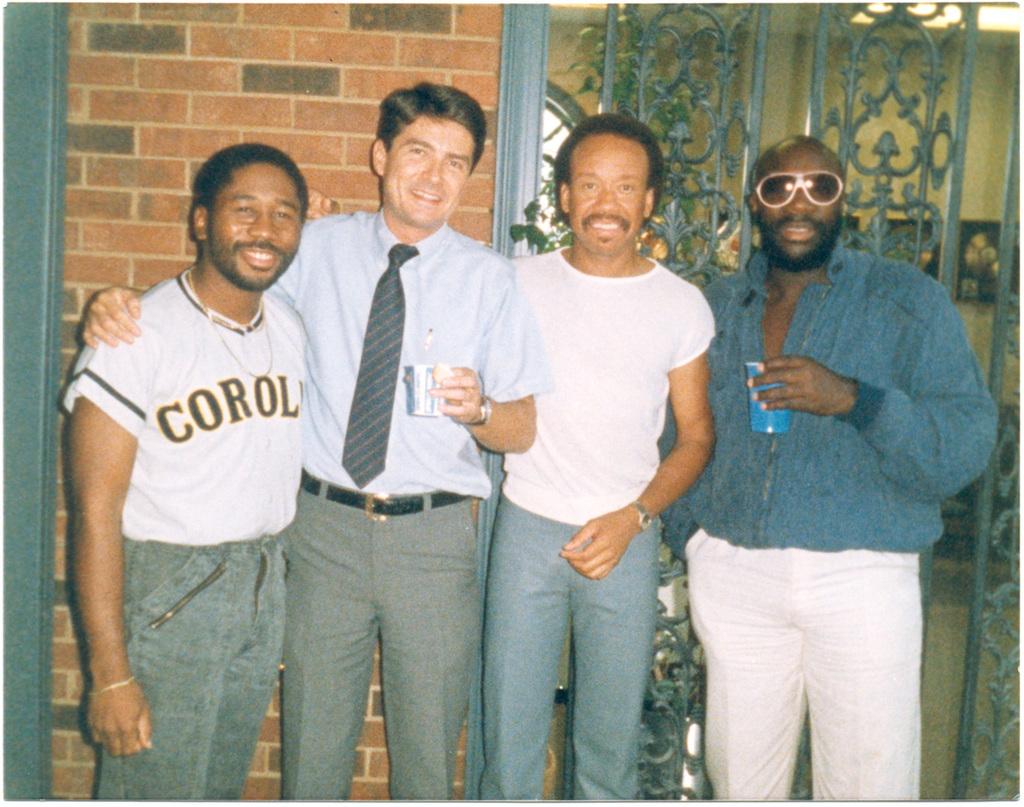 "These (Blues and Soul music) come from deep within the soul and spirit and endure." (Photo: James Alexander, John Fry, Maurice White, and Isaac Hayes)

What advice would you give to aspiring musicians & producer, thinking of pursuing a career in the craft?

These are very difficult and rapidly changing times. Hold fast to your roots. Learn the new technologies, but dot not be captivated by them. Don’t quit your day gig.

It is a waste of time to think of such questions, since the past can never be relived.

Are your music dreams fulfilled? What is your “secret” music DREAM?

I have always said I would work as long as I had health and could be effective. Let’s see what tomorrow brings.