An Interview with K.K. Martin, One of America’s True, Blues Traditional Players

K.K. Martin is a fourth generation Singer/Songwriter/Guitarist/Musician born in West Monroe, Louisiana. Exposed in the womb to the music of Jimmie Rodgers, Robert Johnson and Hank Williams; he began touring with his parents band at age 10, was transplanted to California in 1969, and cut his teeth on the local L.A. rock scene at age 16 landing a brief stint with the Albert Collins Backup Band. As a stalwart in the 1980’s L.A. scene, Martin was a founding member of the band A La Carte, recorded and played with Donald "Duck" Dunn, It's a Beautiful Day, Eric Burdon, Booker T, Rick Derringer, Lester Chambers, Andy Johns, The Chambers Brothers, and Shark Island. He shared stages with, Journey, Van Halen, Motley Crue, Black Oak Arkansas, Blondie, UFO, Johnny Winters, Mike Campbell, (of the Heartbreakers) Glenn Cambell, and The Busboys, to name just a few. 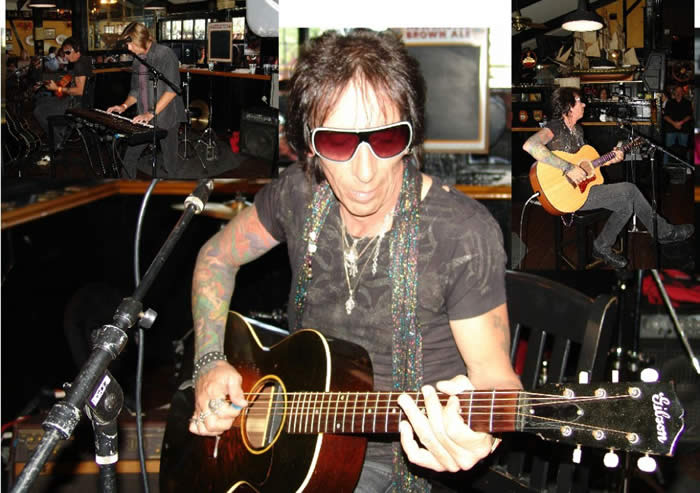 In the late 90’s KK rediscovered his roots, producing, recording and performing Delta Blues in the old solo artist traditions and style. Martin was honored at the 9th Annual HOUSE of BLUES, Los Angeles MUSIC AWARDS being voted "OUTSTANDING BLUES ARTIST”. Martin was the 2010 Error FM Solo Artist of the Year.

His Delta Blues debut, “Naked Blues” featured Martin’s amazing fretwork, the finger styling he learned at his grandmothers knee, but also emphasized his vocal performance and emotion; dark and suffused with undertones of danger. "Naked Blues Volume II" the latest offering from K.K. is a modest, intimate recording that boasts all of the virtues that are associated with the rustic, acoustic variety of blues music.

K.K. Martin is a musician’s musician who “delivers polished material via its basic components - a man, a guitar, and a microphone "

I’ve always been involved with the blues, it was never a matter of desire, it’s like asking me when was my first desire to become involved with food. My first idols were my parents.

One of my mom and dad’s gigs. The first blues song was “Don’t miss your water till your well runs dry” and “ Won’t you ride in my little red wagon” 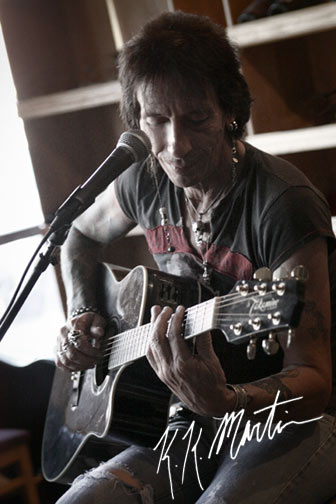 There have been many but working with Steven Tyler, the House of Blues Best New Blues Artist Award and playing in front of 20,000 people with Lester Chambers at the folk Life Festival  are a few that come to mind but there are too many to name. I have been privileged to work with so many great artists. Not being booked for this coming Saturday night.

What does air mean to you? The world and everything in it are what have been offered to me by the Blues

Patience, perseverance, acceptance, compassion, faith…what haven’t I learned? It continues to teach me about life every day.

I’ll let you know when I find out, my gut instinct is to say talent, although talent alone is not enough

Which ones don’t? The ability to listen is at the top of the list.

On a good night, when I am in good form I am not even conscious of the people in the room, I’m just more of a conduit

The number for a good attorney and my gratitude. Explain the meaning of Western Sky Music. 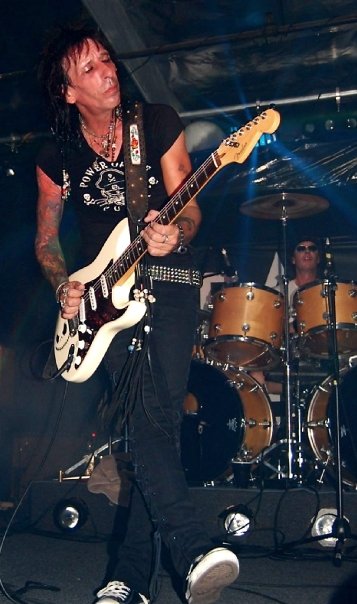 Tell me about the beginning of A La Carte. How did you choose the name and where did it start?

We were just kids who wanted to play rock n’ roll. Three guys, three word…it just made sense. No, actually the bass player showed up wearing a shirt that said it and we liked it. Seal Beach, California

I laugh all the time at gigs, there’s funny shit that happens.

Because it is music of the heart, it is about the human condition and that will always be timeless.

Which artists have you worked with & which you consider the best ?

The list is much too long and I consider the people I am working with at any given moment to be the best possible people I can be working with.

I can’t remember a time when this wasn’t what I wanted to do. I’ve always been blessed with a sense of knowing who I am.

It was always about the story telling and the celebration My rhythm section: Paul Loranger and Frank Cotolo. The A La Carte rhythm section was a truly great rhythm section: Brian O’ Brian and Craig Miller. It’s hard to go wrong with Duck Dunn and Steve Jordan. There are so many great players that it is hard to choose. All great musicians bring something great and wonderful to the party. It’s funny how your playing style changes depending on the musicians you’re working with.

I’ve always been a Gibson man but having said that I never met a guitar I didn’t like. From my Grandmother and my parents and just about everything I’ve ever been exposed to or ever listened to. 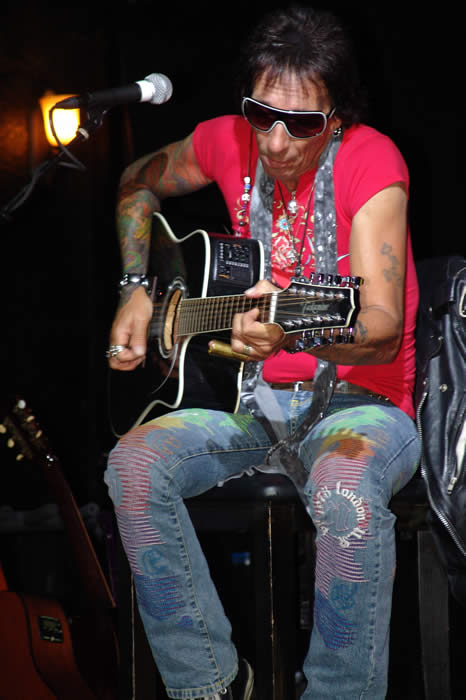 In which songs can someone hear the best of your guitar work? Where did you pick up your slide style?

There are so many to choose from it’s almost impossible to answer that question; Robert Johnson, Muddy Waters, Gatemouth Brown, I mean the list is just endless, Sleepy John Estes.

I’ve never seen a violin player with so many stomp boxes. David and Linda are both very special and beautiful people, my association with them is a very cherished memory.

Remaining true to myself.

I wonder if you could tell me a few things about your experience with Donald Duck Dunn & Booker T.

I stayed a lot at Duck’s house, Duck’s boys; Mike and Jeff, were and still are huge A La Carte fans. I learned so much from Duck Dunn about being in the studio and about the subtleties of making music. He really taught me that less is more and how to listen.

I was booked on the Red, White and Blues Festival with Booker T in Long Beach and what I got from Booker was how to have a sense of professionalism and to treat every gig as if it’s Carnegie Hall. 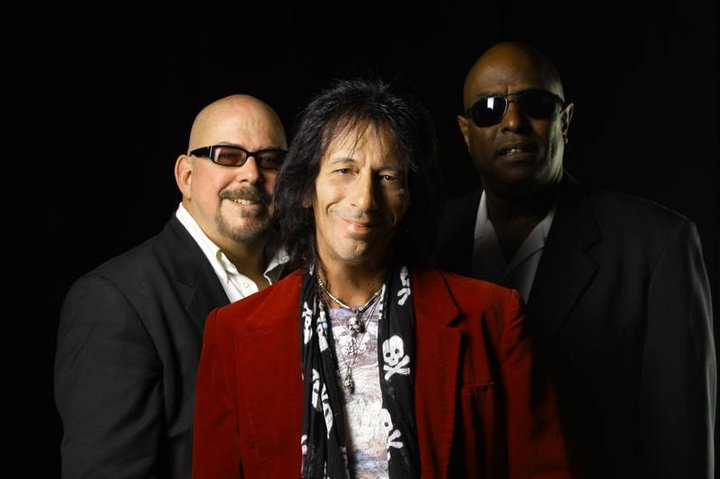 From the musical point of view is there any difference between Louisiana Blues & California Blues?

Absolutely. Music from Louisiana has its own distinct feel and vibe just as West Coast Blues does. There are regional differences in the blues no matter where you go. Just like a taco in L.A. is vastly different from a taco in El Paso.

I am extremely grateful for their interest in the Blues and hang in there, it will get better. I hope to see them soon. One wish for the Blues would be a greater recognition for blues music in America, the land of its birth.

and one last, I would like to put a song next to each name & expression: Blues, Guitar, Johnny Winter, Hollywood, Black Oak Arkansas & K.K. Martin:

Blues: See that my Grave is Kept Clean. It ain’t nothin but the blues

Guitar: Too many songs to choose from, it’s impossible to choose. Keep spankin the plank

Hollywood: Celluloid Heroes. See you in the movies.