An Interview with legendary photographer Dick Waterman: The Blues will never die but it will never be popular

"I like that ‘blues’ is not racial between black and white. It is an economic level. Any poor person with misery in their life has the blues."

Photographer, agent, manager, producer, promoter, Richard Waterman is the only person inducted in The Blues Hall of Fame who was not either a performing artist or a record company executive. He established himself in the Blues community as a diligent advocate for the artists and the art of Blues. Waterman is primarily known today as an archivist and photographer of Blues, Country, Rock and Jazz legends from Mississippi John Hurt to Mick Jagger and Eric Clapton. His commitment to documenting the Blues artists he worked with and came into contact with throughout the years is legendary.

Waterman studied journalism at Boston University in the 1950s. He moved on to write for Broadside Magazine and became its feature editor. In 1963, he began to promote local shows with blues artists including Mississippi John Hurt and Booker "Bukka" White. The next year, he went to Mississippi on a quest that eventually led to the "rediscovery" of legendary blues singer Son House.

Following this, he founded Avalon Productions, the first booking agency ever formed to represent blues artists. Within a few years, he was representing House, Hurt, White, Skip James, Sam "Lightnin'" Hopkins, Arthur “Big Boy” Crudup, Junior Wells, J. B. Hutto and many others. He also promoted concerts by folk and rock acts in the Boston area. In the late 1960s he met a young female guitarist and singer named Bonnie Raitt and persuaded her to begin what has become a long, fruitful music career. 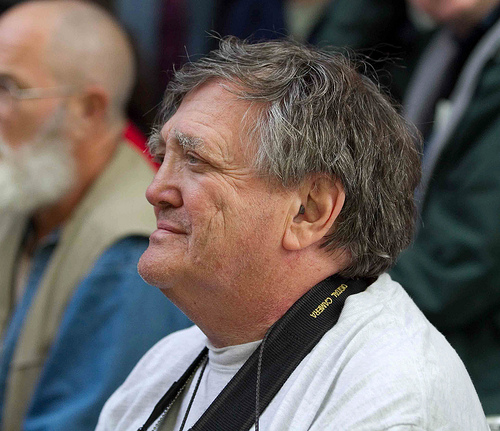 As the older blues artists died, Waterman’s responsibilities shifted to taking care of their estates and providing for their heirs. He moved to Oxford, Mississippi, in the 1980s and began a second career publishing the photographs of blues, folk, country and jazz artists that he had been taking since the early 1960s. His book Between Midnight and Day: The Last Unpublished Blues Archive contains about 100 of his photographs from the 1960s onwards.

In 1993 Waterman was instrumental in placing a new headstone on the grave of Mississippi Fred McDowell with funding from Bonnie Raitt through the Mt. Zion Memorial Fund. Waterman delivered a stirring tribute to McDowell, an early mentor of younger musicians including Raitt, at the dedication ceremony on August 6, 1993, in Como, Mississippi.

Mr. Waterman, when was your first desire to become involved in the blues & who were your first idols?

I have Dixieland and New Orleans jazz first. I saw Louis Armstrong in 1947 with a great band that included Jack Teagarden and Barney Bigard.

The best moment is always when someone that you manage has a huge success. The worst times are when a promoter goes broke and your act isn’t going to get paid. 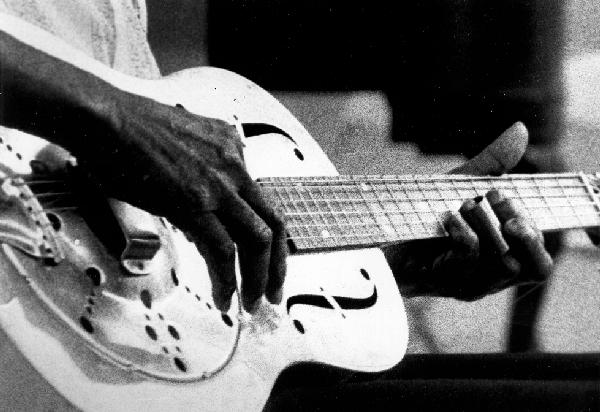 What does the BLUES mean to you & what does “photo” offered you?

I like that ‘blues’ is not racial between black and white. It is an economic level. Any poor person with misery in their life has the blues.

What do you learn about yourself from the photography?  What characterize your work & progress?

What are some of the most memorable concerts you've had?

I shot Willie Nelson’s 60th birthday party in 1993 and it gave me the opportunity to catch more famous artists than any other show I have ever attended. I had Willie, Waylon Jennings, Merle Haggard, Marty Stuart, Travis Tritt, Lyle Lovett, Emmylou Harris. B.B. King, Bonnie Raitt, Bob Dylan, Ray Charles, Paul Simon and many many others.

When did you last laughing in concert and why?

Shooting music is pretty serious business so there isn’t much humor. Once in a while, an artist will recognize me photographing him and point his finger at me and smile. That’s always very special. 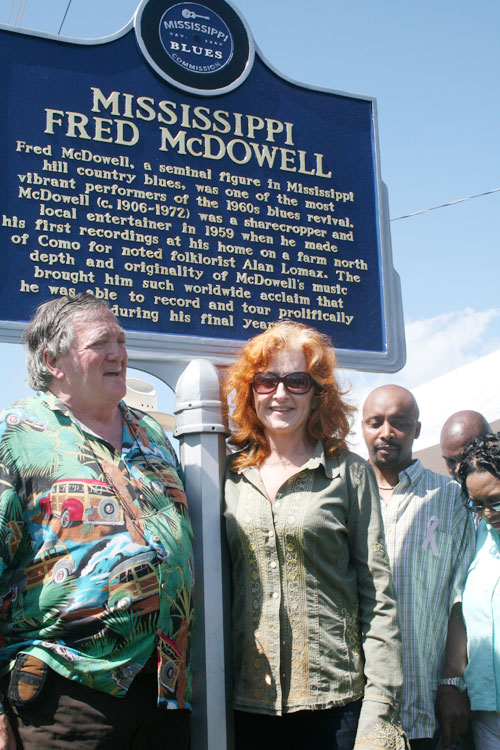 Which artists have you worked with & which do you consider the best friend?

I have worked with far too many to name here. I really cared for Mississippi John Hurt and Junior Wells and Robert Pete Williams. I have had a close friendship with Bonnie Raitt for over 40 years and she is a very special person.

Do you mean as a talent? I would say Ray Charles above all. I think that Son House and Van Morrison are great artists.

Which of historical music personalities would you like to meet and shoots?

Well, Robert Johnson and Charlie Patton would be at the top. Django, of course, and maybe young Elvis.

From whom have you have learned the most secrets about blues music & photo?

I was already a sports photographer before turning to music. I saw Pele play but I was shooting at that time. I have learned no secrets of blues music which is good because it means that I do not have a favorite style. I love all styles.

I loved the music of Mississippi John Hurt and Son House and I never get tired of them. My most recent blues CD purchase was Gary Clark, Jr, from Austin, Texas. I think he has the potential to be very great.

Simply because everyone has experienced a time in their life when sadness and loneliness are so great that only being alone with the music can carry you through.

The blues will never die but it will never be popular or sell a lot of CDs. It takes someone like Eric Clapton to bring the music to a wide audience but that’s not a bad thing because some people will trace the music back to the people who did it first. Clapton’s “From the Cradle” was his effort to have his fans know where his music came from.

Is there any similarity between the blues today and the “old days of blues”?

The personal feelings remain the same. There is just a different method of delivering these feelings as equipment changes through the years. Are there any memories of all those GREAT MUSICIANS you meet which you’d like to share with us?

It’s always interesting to see how famous musicians become meek and timid when they are with their idols. Mick Jagger with Tina Turner, Eric Clapton with Son House, Keith Richards with Hubert Sumlin, Janis Joplin with Big Mama Thornton. This happens all the time. Everyone listens patiently when B. B. King speaks because he has been king for so long.

Technology always brings change and this is usually for the bad. It is best when the audience and the musician have no barriers between them.

How does the blues music come out of the “Between Midnight Day” pages?

Well, I’m not sure that it does. That would have to be in the eye of the reader. If you feel closer to the music because of my photography, then I am very honored.

What musicians have influenced you most as a photographer & which musician would you rather be?

My job as a photographer is NOT to be influenced for the musician. I am there as an observer to come away with an image that represents what the artist is trying to do.

What was the first gig you ever went to? Which of your work would you consider to be the best?

I saw Louis Armstrong in Boston in 1947 when I was 12 years old. I can remember it very clearly. As to which of my work is my best, that is not my decision to make. Ray Charles was a joy to photograph. John Hurt’s face was beautiful and I miss him very much. How would you describe your contact with the artists when you are “on project”?

It’s very different now than it was when I started. There was very little security back then and you had access to the artists. There are so many people guarding the musicians now that I could never have had my career if I was starting now.

Which is the most interesting period in your life and why? What advice would you give to aspiring photographers thinking of pursuing a career in the craft?

The most interesting period of my life still lies ahead of me. Don’t you think that everyone should feel that way? My advice to new photographers is to get good reliable equipment and take good care of it. Shoot a lot and the most important piece of advice is to get a great filing system so you can always find an old shot when you need to get it again. 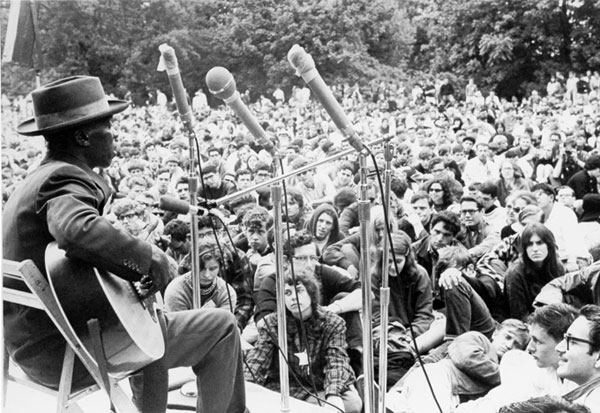 What do you feel is the key to your success as a photographer?

I am patient and I have learned from my mistakes. I will bring my camera up to my eye and wait wait wait for that instant that I know is precisely the time to click the shutter.

Who from THE BLUESMEN had the most passion for the image & camera lens?

Son House had tremendous emotion and he plunged himself into his performance. He was early in my career but he set a standard for hundreds to come after him.

Can music have image and the image to have notes?

My career has been to capture the image. I leave it to others to make those decisions. 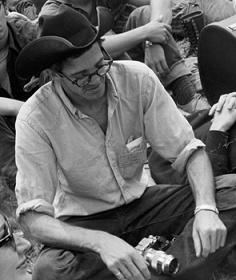 What are some of the most memorable tales from Newport Folk Festival?

Well, the audience could be as large as 18,000 or more so a good appearance there could lead to a great deal of work for the next year and maybe even a recording contract. Seeing how Bob Dylan changed from 1963 to 1964 to 1965 was magical. He went from a young beginner to a major star right before your eyes.

Who is a quick review of your work & how do you want to be remembered?

I always tried to be an observer on the outside and never intrude. I want to be remembered as someone who did honest work and never used tricks.

Which of the artists were the most difficult and which was the most gifted on pickup lens?

That has changed over the years. There are many artists now that want total control of what a photographer is trying to do. I have never had anything from Van Morrison but a grim face. But I do not work in the world of Lady Gaga or Justin Bieber so I can’t comment of what they would be like.

How important is image to artists? To which person do you want to send one from your photos?

Well, image is everything to modern artists because they want to control what is shown to the public. Years ago, artists were happy to play and how they looked was never a consideration.

All of the older bluesmen from the Sixties knew that I had a favorite song and they would play it for me. I guess that my special moment was when Mississippi John Hurt would play “My Creole Belle” for me. 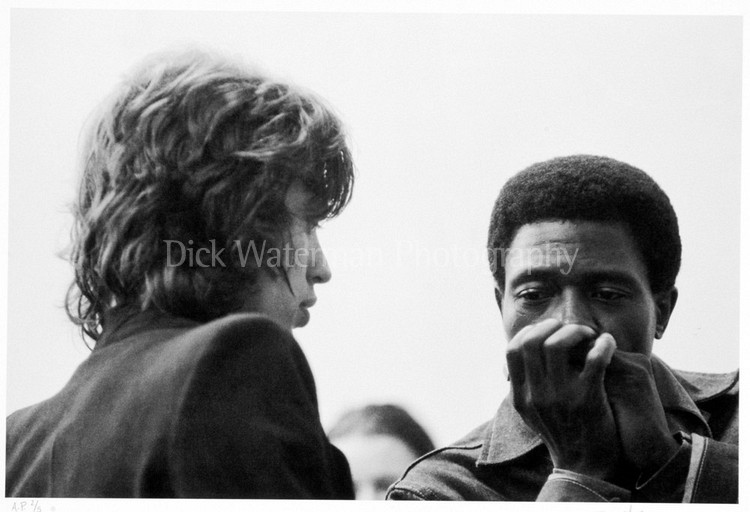