An Interview with Les Dudek, a guitar legend who's keepin' alive the legacy of Southern culture and music

"Blues is just another expression of music from the heart. And if you can play the Blues, you can jam with any player who plays the Blues too."

Les Dudek: The sound that could raise the old Dixie

Les Dudek was born at Naval Air Station, Quonset Point, Rhode Island in 1952. The family is of Czech, German, Italian, and Russian extraction. The surname Dudek derives from the Slavic word, Duda which means street musician. His musical influences, along with The Beatles, were Cream, Jimi Hendrix, and The Ventures. He had built quite a reputation around the Florida area as a proficient guitar player, having started playing in local bands as a teenager. Those bands were "The United Sounds", "Blue Truth" and "Power". That reputation would place him in the studio with the Allman Brothers Band for the recording of the Brothers & Sisters album. 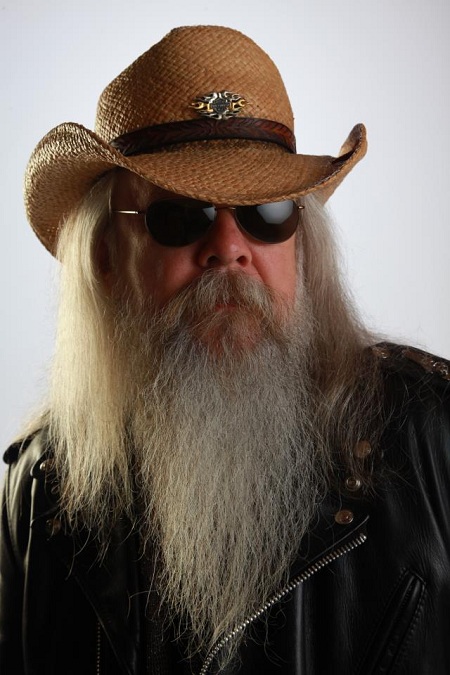 His next stops were as a guitarist for Boz Scaggs and The Steve Miller Band. Dudek was invited to play in a supergroup called Journey but he had received an offer to record for Columbia Records as a solo artist. He recorded four solo albums for Columbia Records, "Les Dudek" (Debut), "Say No More", "Ghost Town Parade" and "Gypsy Ride". He later collaborated with Cher, Stevie Nicks, and with two other Columbia Artists, Mike Finnegan and Jim Krueger, with whom he formed DFK (Dudek, Finnegan, and Krueger) in 1978. A DFK album was released by Columbia Records a year later.

Between the years 1979 and 1982, Les and Cher had a personal as well as professional relationship. Dudek wrote and performed some of the music for the 1984 movie Mask starring Cher, Sam Elliott, Eric Stoltz, and Laura Dern. He had a small part in the film as "Bone", a biker. In 1991 Les played guitar with Stevie Nicks on her "Whole Lot Of Trouble" tour.

Two more solo Cds later, "Deeper Shades Of Blues" and "Freestyle", Dudek hit the road again with his own band, and has been performing songs from all his records, plus a few hits he's recorded with other artists. Les Dudek's new release is "Delta Breeze" with great song writing, and slide/ blues rock guitar style, with powerful vocals. Les is Back !!! (Photo by Kevin Roberts)

I don’t recall any one particular experience that made me a good musician other than dedication and practice, whereas, experiencing life does in fact influence me as a songwriter.

How do you describe Les Dudek sound and progress and what is your music philosophy?

First thing that comes to my mind if you need to put it in a genre is, Rockin’ Electric Blues, with all the colors of old Dixie. And I think every real player is driven or inspired by a certain chord, and groove. 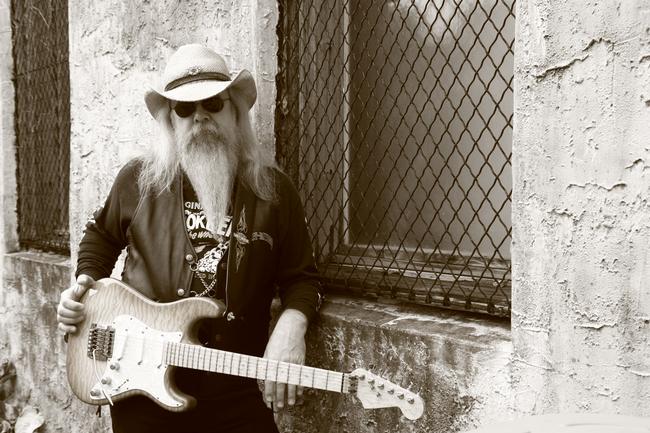 "First thing that comes to my mind if you need to put it in a genre is, Rockin’ Electric Blues, with all the colors of old Dixie."  (Photo by Kevin Roberts)

Do you think that "Delta Breeze" sound is as you started out all these years ago? Or are you pointing in a new direction?

In some ways, or maybe just a continuation. I’m always pointing in a new direction, but I try not to forget where I came from.

What do you miss most nowadays from the old days of music specially the 70s?

My youth, record stores, FM Radio, all the great places to play, and the audiences came to hear real players, playing real music. And it didn’t all sound the same. 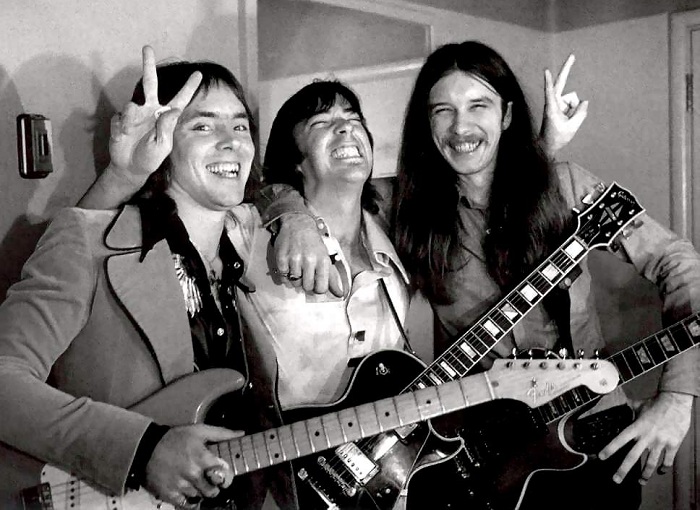 "I think real players pick up bits and pieces from other real players and then make it their own." (Photo by Jim Marshall: Left to right - Ronnie Montrose, Boz Scaggs and Les Dudek)

Major in business in college, and make sure you really are talented at singing, playing an instrument and very good at writing songs, because that’s where you make money. You’ll need all those skills to have a chance in the music business. And even then, there are no guarantees.

Are there any memories from the Allman Brothers recording time which you’d like to share with us?

Just that it was intensely surreal. It was just months after Duane had died in a motorcycle accident. I was standing where he would be standing if he were still alive. And there I am recording on what would later be two of their biggest hits. Yeah, I think that’s right up there with one of my most memorable Allman Brothers recording moments.

Which memories from Steve Miller and Boz Scaggs makes you smile?

When Miller said, why don’t you come to play in my band? When Boz said, your hired.

Would you mind telling me most vivid memory from Cher and your role in “MASK” like a biker?

I have two. The first is the scene when I did my cigarette lighter trick to light her cigarette, no one knew I was going to do it and it surprised Cher and the director Peter Bogdanovich, Peter liked it, so he kept it in the movie. And the second, was the scene where I’m kissing her by the tree, no one can hear but me, when she says, “finally I’m kissing someone in this movie I’ve kissed before, and is not a stranger”. 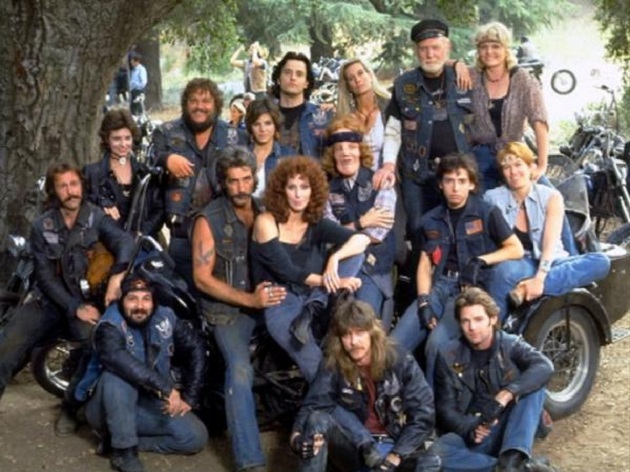 Photo: Les Dudek (front from Cher) as biker "Bone". Les wrote and performed some of the music for the 1984 movie Mask starring Cher, Sam Elliott and Eric Stoltz.

From the music point of view what are the difference and similarity between your solo albums and sessions work?

On my solo albums I’m recording what I created musically. Working on a session, my thought process is to blend in to what someone else created.

I can honestly say I’ve had the pleasure to sit in on so many incredible jams, far too many to list here, and you wouldn’t believe me anyway.  OK, I’ll give you one, me with, Gene Simmons, Spencer Davis, Mitch Mitchell and Albert Collins at the Viper Room in LA, but it was called the Central back then.

Wow, again too many to list. I’ll give one. It was when I played the second Knebworth Park festival outside of London England, I was playing with The Steve Miller Band and Pink Floyd was the headliner that was for about 300,000 people.

Do you remember anything funny from recording time and touring? Yeah but nothing I can mention here.

Some music styles can be fads but the Blues Rock is always with us. Why do think that is?

(Photo: Les Dudek jammin' with Norton Buffalo at Ford Theater Tampa, FL 2008. It's the last time Les jammed with, and saw Norton before he died.)

Just that I like to play it because it’s from the soul. Blues is just another expression of music from the heart. And if you can play the Blues, you can jam with any player who plays the Blues too. It’s like playing golf. You don’t need a partner to play golf, but chances are someone will pair up with you when you get to the course.

Do you know why the sound of slide guitar is connected to the Southern music?

Cause it sounds so damn good!  I think it’s because slide makes the guitar cry and sing at the same time.

What is the line that connects the legacy of Blues, Rock, Southern Rock and beyond?

I reckon that just might be the line that's connected to a cane poll with a Texas rig at the end for good presentation, down at the old secret fishin' hole in Georgia, where you'll catch that big string of North Florida cat fish but make sure the oil is hot enough in that Mississippi fryer before you cook them up. And be sure to put some Louisiana hot sauce on it before you take that first bite. Or perhaps it's just the sounds and flavors of Blues that were born and still live in the American Deep South.

Are there any memories from Mitch Mitchell and Albert Collins which you’d like to share with us?

I remember Albert telling me not to ever loose that pickin' thing I do, least that's the way he said it. As for Mitch, I didn't get the chance to talk with him. I do recall he was a wirey little tea bag who beat the hell out of the drums. It was a pleasure to have met and jammed with them both. 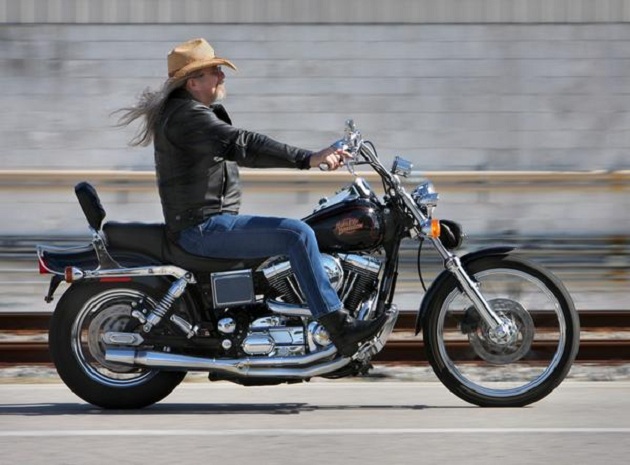 "The music my fans get from me is from the heart, and my lyrics have meaning. I don't play what some call traditional Blues; rather, I cut my own groove and play my own flavor of Blues." (Photo by Bob Feather)

Ride my motorcycle, and sleep in my own bed.

Drop dead gorgeous women, who have decided they want to have sex with me.

Having those drop dead gorgeous women, actually having sex with me.

Why do you think that Les Dudek's sound is continuing to generate such a devoted following?

Maybe it's because I don't do fads. The music my fans get from me is from the heart, and my lyrics have meaning. I don't play what some call traditional Blues; rather, I cut my own groove and play my own flavor of Blues. It's not for everyone; it's only for those who prefer to listen and grove on the real deal.

Hey, you asked…..Go to www.cdbaby.com/cd/lesdudek and get my new CD “Delta Breeze”.  The more you hear it, the more it will grow on you. 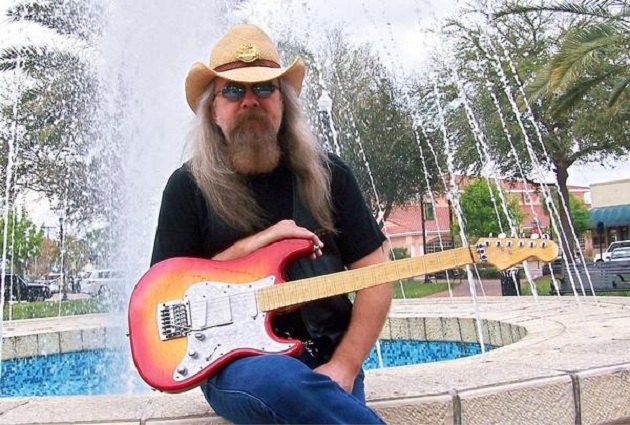