An Interview with Mickey Pantelous & Dr. Albert Flipout - an avant-garde artist & the CAN plays the Blues

"I think if someone wants to change the musical world all they have to do is write their own music, their own songs."

Mickey Pantelous & Dr. Albert Flipout: The Surrelist Blues Of One Can Band

Michael (Mickey) Pantelous was born in Athens, from Greek father and Danish mother. He learns playing the drums as a schoolboy and plays in several rock/heavy rock bands. In 1989 he starts strumming the guitar and next joined with the local blues band "Blues Trick" as a sit in drummer and gets fascinated with the blues. Mickey blows the harmonica and focuses on slide technique practicing on his grandfather’s 70year old rebuilt guitar. With Mickey Pantelous & the Magic Session participates in the 1st European Blues rock Prize contest, receiving outstanding reviews. After Magic Session’s break up runs into old time fellow musician, Boris Voutsinos, who plays with Christos Polydoros, as the "Blues Duo". Mickey joins in and they become "The Drunk Trunk Blues Trio". 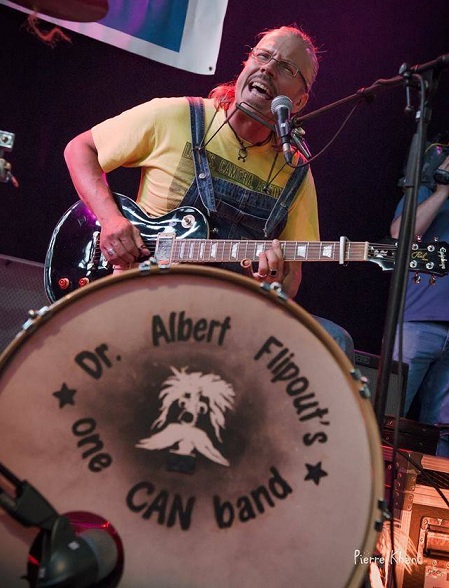 He creates the "Cheess-Mates" and joins up with Boris Voutsinos once again "The Drunk Trunk Blues Duo" fed up with the country side, moves back in to the city. In 2008 co-wrights the music for the theater play "Hughie" by Eugene O’Neil with Platon Andritsakis, and performs it live. In 2010 gets in to a studio with Dr. Albert Flipout and records the CD "Can't Find My Pills". Dr. Albert Flipout is a fictional character created by Mickey Pantelous in 2006. Dr. Flipout is a 10 cm can, filled with pebbles that Mickey attaches to his left foot when playing as a one-man band. The band’s name is “Dr. Albert Flipout’s one CAN Band” and Mickey claims that Albert is the leader of the band and that is why by definition, it is a “one CAN band” and not a “one man band”. Mickey also claims that it is Albert pulling the strings when they’re playing and not himself.

Mickey first presented Dr. Albert Flipout in 2008 in a show called “Dr. Flipout’s Story Through A Century Of Blues Based American Music”. He would unfold his story by showing pictures and documents of Dr. Flipout’s life, while playing songs either recorded at the period of his life he would refer to (starting out with artists like Blind Lemmon Jefferson and Blind Willie McTell and ending up with artists like The White Stripes and Black Rebel Motorcycle Club), or songs written by Dr. Albert Flipout himself. The show was a great success and is still being performed every now and then. It is considered to be a cult classic. Mickey & Dr. Albert talks about the Blues and their experience on the road.

What have you learned about yourself from the blues and what does the blues mean to you?

Dr. Albert: Because it’s simple, it grooves and it makes sense.

What characterizes your music philosophy and songbook? 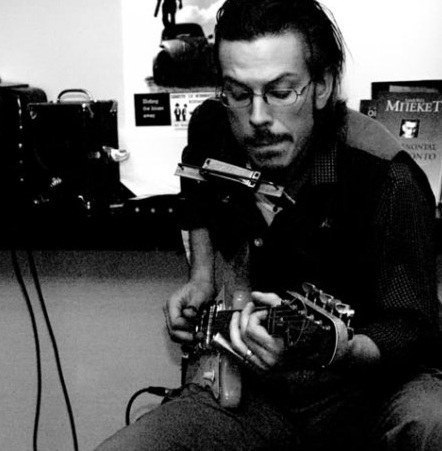 Mickey: Well I started out with the traditional 12 bar form but it really bored me after a while, so I started writing more jazzy stuff (Tom Waits kind of jazzy). But you need a band to play that kind of music, so after I dismissed my band and started playing alone as a One Man Band, I started playing with a more Boogie- Rock ’n roll attitude. I consider myself to be a Blues-Rock, Avant-garde artist.

As far as my lyrics is concerned there is always a wicked story or a strange kind of truth in my songs. True lyrics, true songs.

How started the thought of Dr. Albert Flipout?

Mickey: As I said I used to have a band that I was forced to dismiss for various reasons and I was left all alone like “a stubble in the field” (as the Greeks would say). It was then I realized things were going to be tough and I’d need someone or something I could hold on too.  That’s when I came up with the idea of Dr. Albert Flipout (the tin CAN shaker that’s attached on my left foot and works as a snare drum in my one man band). And because I decided to name the band after him it’s a one CAN band we are running (Albert and I) and not a one MAN band.

Are there any memories from gigs, jams, festivals and busking times which you’d like to share with us?

Mickey: Our strongest memory from our buskin times would be in Rotterdam in the Netherlands. We were being chased by the police ‘cause we weren’t allowed to play in the streets with an amplifier. We were using a “pig-nose”. We had been warned by the police twice already and when they came for us (me and Albert) for the third time we simply started running. We ended up in a dead-end Alley and we literally climbed in to trash container in order to hide. There, in the trash container we met Jess. Jess is the third member of the band. She doesn’t play any instruments but she’s always there on top of the Hi-hat keeping an eye on things.

Best memory from festivals would be being back stage with “Dr. Feelgood” at Charleroi talking medicine of course.

And one of the best gigs I’ve ever done was in Crete, Ierapetra. The gig started after midnight and it was outdoors. Before I even started playing the second song the Police arrived and they didn’t look friendly. After some negotiation we were allowed to continue but we had to shut down the P.A. I explained the situation to the audience and told them that if they wanted me to continue playing they had to be really quiet themselves.

They agreed, and the sound engineer turned the master volume down instead of turning off the P.A. Now the funny thing is that every time I’d finish a song people wouldn’t clap, instead they’d shake their hands in the air like deaf-mute people do. That went on for about two hours but when the last song was over everybody would clap and yell and scream and make as much noise they could make. It was really funny… 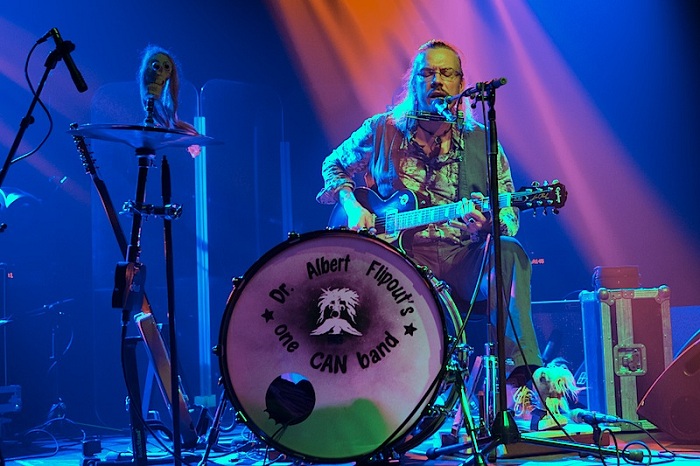 Mickey: I guess what I “miss” the most is some of the artists themselves. I’ll never have the opportunity to see them perform live. I’ve stopped “hoping” for some time now especially after the crisis. I think the only think I still hope for is that I don’t die in pain. But I guess you meant what I hope for music wise. The answer is nothing really again. The blues will never die so there are always going to be good surprises and bad ones too. As for my fears I’m living them every day music wise and not.

Dr. Albert: In order to get an answer to that question you’ll have to visit Mickey’s web-site and go to the Dr. Flipout page. There you can read everything you need to know about my life.

Mickey: Nothing really. There is lots of stuff out there I think is crap but then again who am I to judge what is crap and what’s not. I think if someone wants to change the musical world all they have to do is write their own music, their own songs. If what they write or compose is good and powerful enough it will make a bigger or smaller change in the musical world. It will probably influence someone. That’s how changes are made. 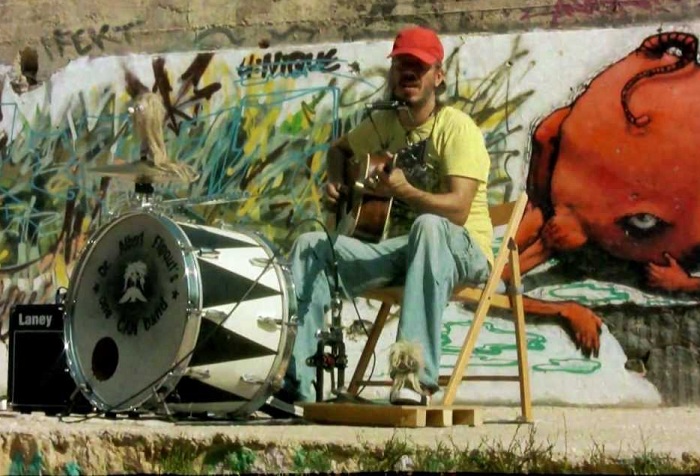 "I consider myself to be a Blues-Rock, Avant-garde artist. As far as my lyrics is concerned there is always a wicked story or a strange kind of truth in my songs. True lyrics, true songs."

What are the lines that connect the legacy of Blues from Africa to the States and UK to continue to Greece?

Mickey: It’s an evolution. If the States weren’t a super-power the blues as a genre never would have been. The States became a super-power and the Blues went Global (in the western world).

Mickey: I think the most interesting period is now, simply because I’m in it… (I’m just kidding…) But I do think the most interesting period is now. Many bands, many good bands, many styles, interesting approaches on things, people are experimenting a lot with technology (in a good way) they are writing their own songs and I have a feeling that the Greek Blues scene is kind of getting away from the traditional Chicago shuffle Blues style witch I’m NOT a big fan off.

From the musical point of view what are the differences between Greek and the other European Blues scenes?

Dr. Albert: I don’t think there are big differences. There are good and bad bands here and there and everywhere. I think what makes the greatest difference between the Greek and the European scene is that the fans in Europe are much more supportive. 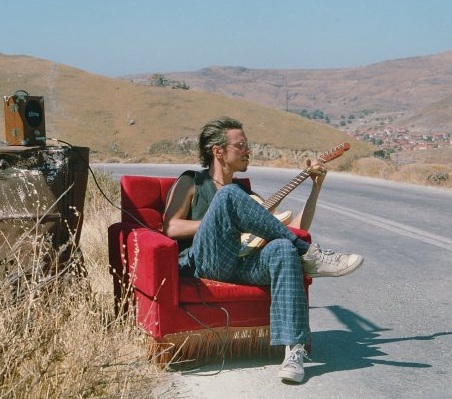 Mickey: What has touched me emotionally is a festival named “Keep the spirit alive” that takes place in Ierapetra Crete in memory of Giorgos Kouvakis who drowned two years ago. Giorgos was a great fan of music and really supported the Greek Blues Rock scene. The festival is being organized by his sisters and friends and some of Giorgos favorite bands are invited to play every year. This year we were invited. The hospitality was great and we did have some great laughs as well.

Dr. Albert: The most important experience I think I ever had was running in to Mickey. As far as advice being given I’m usually the one that gives advice to people. Don’t forget I’m over 101 years old.

What has made you laugh lately and what touched (emotionally) you from Mickey Pantelous?

Dr. Albert: Mickey himself. The things he does and the way he thinks... He’s hilarious... But don’t say I said so!.

Mickey: One day wouldn’t be enough but Chicago in the ‘50s really fascinates me… Muddy Watters, Howling Wolf, Little Walter… Before Chicago blues got stuck to that monotonous boring 12 bar shuffle.

Dr. Albert: I’d like to go back to San Francisco, California in 1943 and spend a day with my beloved wife Betty McNeal. 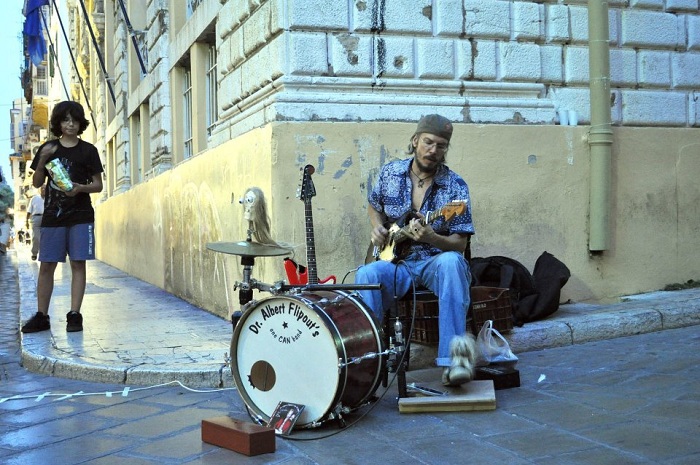