An Interview with photographer Tim Mantoani: Music and photography are about creating emotion

"You have to enjoy your life now, because tomorrow, everything in some way has changed."

Tim Mantoani is a Southern California/New York based professional photographer specializing in advertising, commerical, editorial, sports, portrait and fine art photography.
Tim works with a wide range of clients in both the editorial and advertising fields. He is known primarily for his dramatic portraits of sports personalities from around the world, several of which can be seen in his book Mindgames: Explorations Into the Mental Area of Sport. 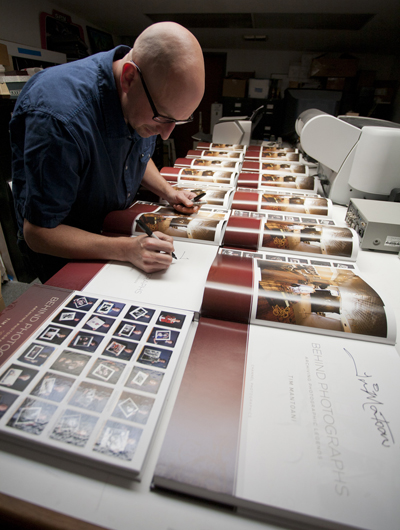 After graduating from Brooks Institute of Photography in Santa Barbara, he worked closely with renowned photographic educator Dean Collins, taking a full-time position as Collins' studio manger. Wisely following in his late mentor's footsteps, Mantoani is a master of innovative lighting solutions and has published videos for photographic education.
Mantoani's work has appeared in several publications including Sports Illustrated, ESPN The Magazine, TIME, and Newsweek, to name a just a few.
Tim Mantoani's "Behind Photographs" book comprises a brilliant authoritive and historical record of an era of photography. Features 158 photographer portraits shot by Tim Mantoani on 20x24 Polaroid, behind the scenes images, forward by Steve McCurry and an essay by John Reuter. This book contains a few historical images that depict death, war and nudity: parental guidance is suggested.

Tim, when was your first desire to become involved in the photography?
I started taking pictures in High School and just fell in love with it from the first time I look through the lens of an SLR camera.

What does “photo” offered you?
Being a photographer has opened up a world to me that I would have otherwise never seen. The camera gives you access to people and places that are off limits to most. 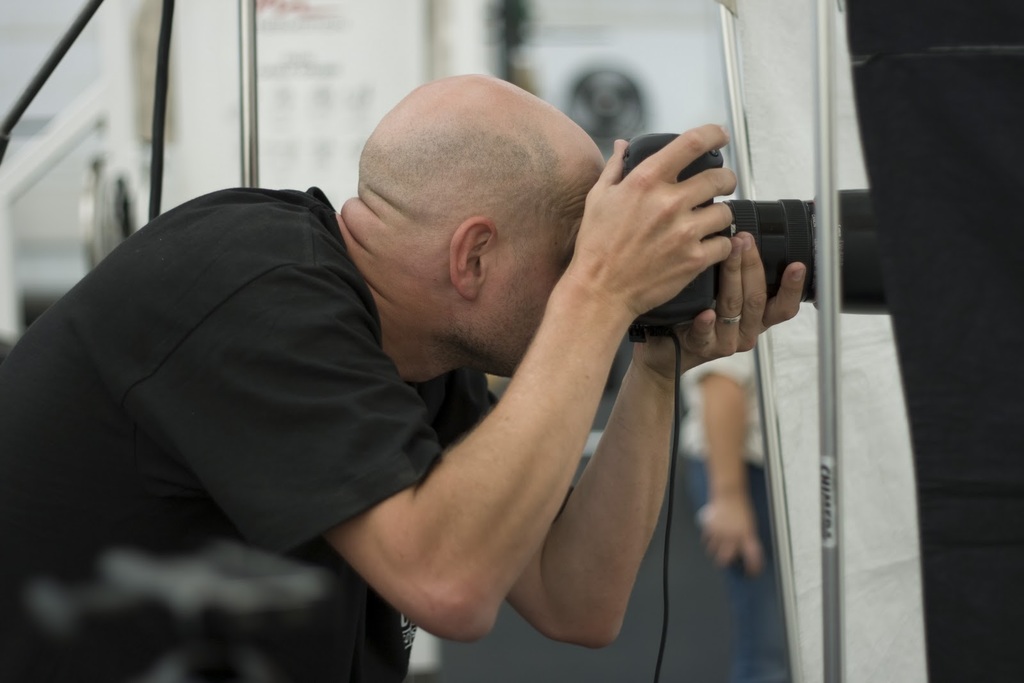 What do you learn about yourself from the photography?
Photography has taught me that every moment is temporary. You have to enjoy your life now, because tomorrow, everything in some way has changed. I use photography to reflect on my own life and history and to see how I can make my life and my families life as fulfilling as possible.

What are some of the most memorable shoots you've had?
The past two years I have photographed the cover for the football video game EA Madden Football in Times Square in New York. Growing up in the US, Times Square is such a legendary place, doing a shoot for such a well known project in front of so many people has been amazing. 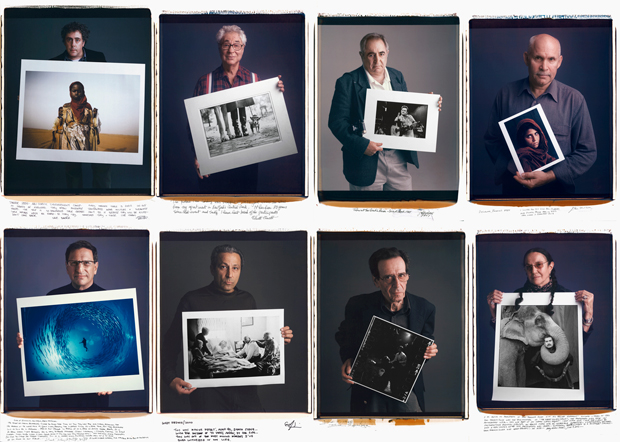 You had pretty interesting project BEHIND PHOTOGRAPHS where did you get that idea?
I wanted to try shooting with the legendary 20x24 Polaroid Camera and needed to find a subject that would be appropriate for the session, so I called a couple of well known photographers and asked them to bring in a few prints to hold for a shot. It was a way to show both them and an image they were known for in the same frame. I loved the results of the first session and it took off from there.

Are there any memories of all GREAT PHOTOGRAPHERS you meet which you’d like to share with us?
There have been so many great memories and friendships that have come out of this project. Hearing many of the photographers tell the stories being their iconic images, first hand, is magical. Many of the photographers in the book were huge influences in my career and getting a chance to collaborate with them was incredible.

What are some of the most memorable stories from those HISTORIC IMAGES?
Hearing Bill Eppridge recall the night of the assassination of Robert Kennedy is chilling. To think he was that close to being shot himself and still managed to keep his composure and document such a historic event. Also, Nick Ut’s , Naplam Girl…that photo changed the world. He ended up driving those kids to the hospital and demanded that their burns were treated. He saved their lives. 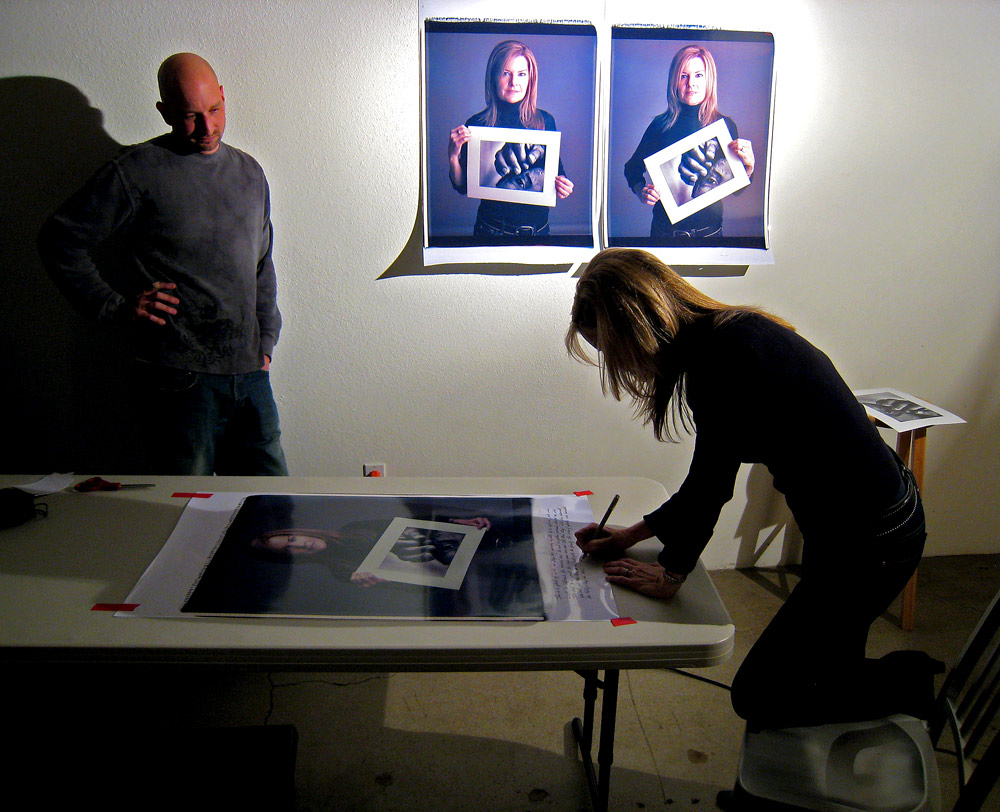 Which of those pictures would like to have you shoot?
Most of them! In the career of a photographer, you are lucky if you get a few really special images.

Which was the best moment of your career and which was the worst?
On of the best moments was seeing my photograph on the cover of a magazine for the first time at the store. It is such a great feeling to see something you created out there for so many other people to view and enjoy. One of the worst moments came when I was assisting a well known photographer and realized I had given him several film holders to shoot that were empty. I discovered this when the shoot was over and everyone had left for the night. However, it was fortunate that it was a food shoot and I was able to rebuild the set and I recreated the shot that night, photographed it and took the film in to be processed. No one ever knew until I told them. 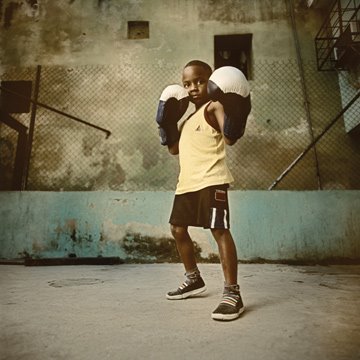 Would you mind telling me your most vivid memory from your shootings with REAL PEOPLE?
I love photographing real people when I travel. The most memorable trip was to Cuba. The textures, colors and people of Havana are amazing. One of my favorite shots was of a young boy, Leonardo, I found at a boxing gym. I remember seeing him working out and he had this fire in his eyes. I asked the manager of the gym if I could set up a portrait of him against a large green wall. He agreed and a brought the boy over and was only able to direct him with gestures due to the language barrier. I still love that shot.

Which is your favorite photo? In which photo can someone see the best of your work?
One of my favorite image is a portrait I made of my son the first time I rented the 20x24 Polaroid. I only shot one frame and I just love his expression. It is hard for me to judge what is the best image for someone else to appreciate my work. Each person is different, so what others see in my work is up to them to love or hate.

How would you describe your contact to people, when you are “on the project”?
I think I am working anytime I have a camera in my hand and point it at someone. I rarely make photographs of people without them being aware and giving me some type of permission to click the shutter. Which is the most interesting period in your life and why?
The last few years, while I have been working on my book, have been very educational and interesting. Over this 5 year period, I photographed 153 different photographers, shot a wide range of ad campaigns and editorial features and have seen my son grow into a wonderful young man.

What advice would you give to aspiring photographers thinking of pursuing a career in the craft?
You have to LOVE it and yourself into your images. There are a lot of people that make pretty pictures, but the most successful photographers do more than that, their images are a reflection of themselves and they make images that in some way have their visual fingerprint on them.

What do you feel is the key to your success as a photographer?
My parents were great role models and showed me how to work hard. I think I have been successful because I am passionate about photography and I work hard and being better at it every day. 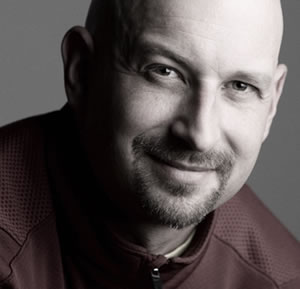 To which person do you want to send one from your photos?
Hummmmm….I will have to think about that more.

What is your “secret” PHOTO DREAM?
I would like to make a portrait of  a US President while they are in office and photograph tribal people in Papua New Guinea.

"A picture is worth a thousand words" it is certain…can music has image and the image to have notes?

I think both music and photography are about creating emotion and invoking a reaction in the viewer. Like music, some photographs can make you smile, some make you laugh, some make you cry and others make you angry. The ones that don’t create a response are just noise.

From whom have you have learned the most secrets about the image?
I thing I have learned a little from a lot of people.

What is the strangest desire that someone have request in the shooting?
I once had to hire a full grown Bengal Tiger for a shoot. “Rocky” and his trainer came to the studio and things were going fine until Rocky make a very strange noise. At that point the trainer simply said, “the shoot is over!” and put him back in his cage. No one questioned him. 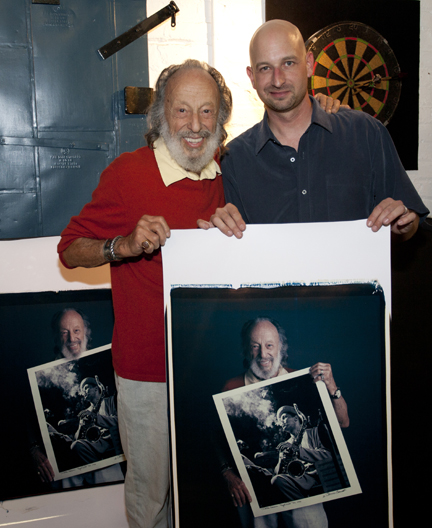 Who are your favorite musicians, both old and new, would you like to meet and shoots?

I enjoy all types of music and listen to a wide range of music on a regular basis. I think Willie Nelson would be a great subject for a portrait since his face has such character. Keb Mo, Seal, Sting, Elton John, Buddy Guy, Snoop, Bono, Slash, BB King, The Stones, Kiss, Bonnie Raitt, Sinatra, Elvis, to name a few!

Is there any shooting made by mistake, but know you’re proud of?
I think photography is all about making mistakes and learning from them. I make mistakes every time I shoot.

Every time I am out shooting I have a smile on my face, I love my job!