An Interview with the Beat artist Bob Branaman: I can only be in the Now the rest don’t matter somehow

"Music can be like mediation and connect us to everything. When I work I have the music going."

Bob "Barbitol Bob" Branaman: We are all Buddha Nature

Beat Generation poet, painter, and film producer Bob Branaman continues to make avantgarde art today. Branaman joined the Beatniks in San Francisco in the 1950s, part of the Kansas Vortex, which included Charles Plymell and Michael McClure, and soon made his name as a hep cat. He outlived many of his bohemian contemporaries, despite his bad habits. Over the years he has collected a great deal of stories and ephemera from that time period and because he has outlived most of his beat contemporaries he is in many ways an archivist and one of the last voices of the Beat Generation. 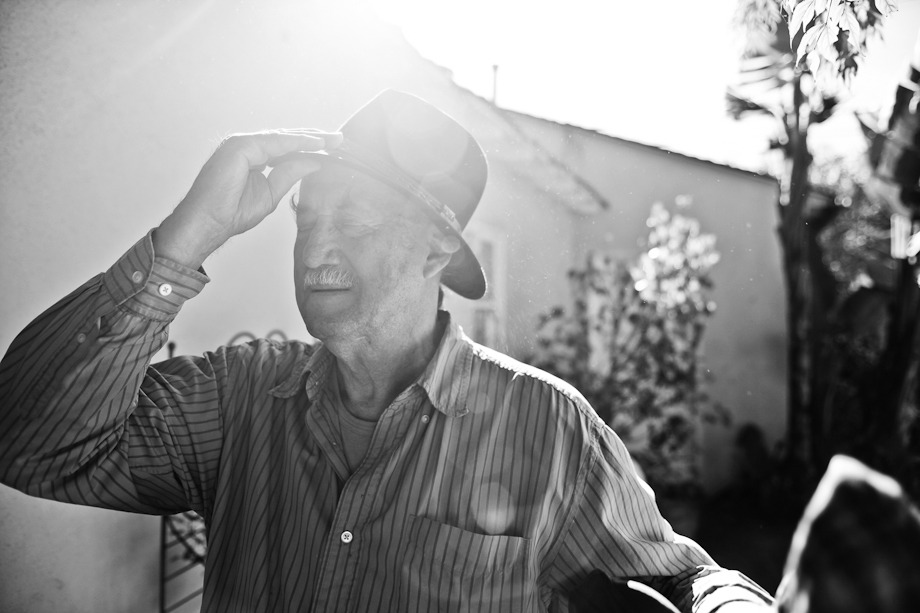 LA based Robert "Barbitol Bob" Ronnie Branaman, a Beat Generation artist/ poet discussing his over 50 years as an artist and poet. Like the other great Beats (Allen Ginsberg, Jack Kerouac & William S. Burroughs), Bob was there from almost the beginning. And before R. Crumb, Jack Jackson (Jaxon), Frank Stack (Foolbert Sturgeon) and the other great Underground Comix artists, there was...

Bob Branaman, is a spiritual traveler whose art's journey has brought him beyond common "border".

When I moved to San Francisco after having completed a summer of school at the university of Guadalajara. It was 1959, The Coffee Gallery on Gant Street in North Beach still has sawdust of its floor, and a beer cost 15 cents. Artist of all kinds were everywhere, the “Beat” movement or area was in full swing. The poet Alan Russo introduced me to fellow artist who were also from Kansas, the poet Michael McClure, Bruce Conner and Dave Haselwood. Dave had the Auerhahn Press on Franklin St. he printed exquisite handmade poetry book by the local poets, Philip Whalen, John Wieners, Michael McClure, Philip Lamantia and others. In 1960 Dave printed Edward Marshall’s book of Poetry Hellan, Hellan I did the cover and illustrations for it. The same year I was in the opening show of the seminal Batman Gallery. At this time in San Francisco there were major changes in attitudes and life-style in all the arts and spirituality that not only influenced my life greatly but also for over a decade was to affect all of America and eventually the world. 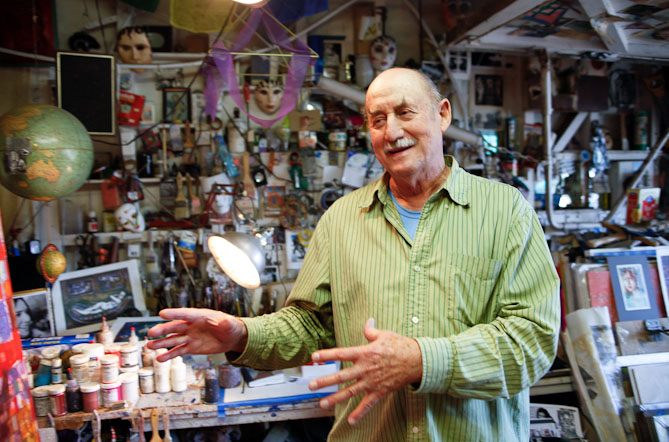 From old men and children (some of the children were mine), Women and lovers.

What experiences in your life make you a GOOD artist and person?

Not taking myself so seriously, learning to laugh at myself. Doing spiritual work and the Arica school of mediation and higher knowledge.

Which memory from 50s - 60s San Francisco makes you smile?

What do you think were the reasons for the avantgarde boom of art at the late 50s and early 60s?

It was a great convergence older artist and the bohemians had laid the groundwork, it was just the right time in history everything came together. Perhaps its cyclic and we are getting ready for one Now!

What is the “feel” you miss most nowadays from the Bohemian Frisco?

That the world was our oyster, that we could do anything and it would effect changes of our culture. Unlimited possibilities and that art and spirit would rule. 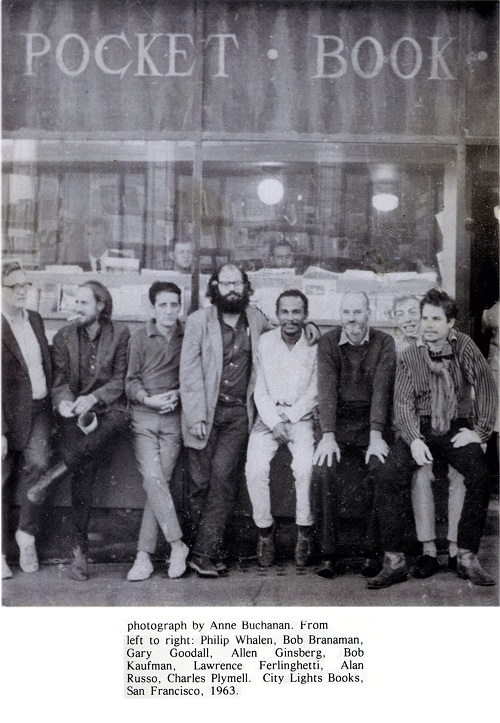 The Café Review has just come out with an Auerhahn Press Tribute. There is a interview with Dave Haselwood who started and ran the press. Dave was also from Wichita Kansas like Michael McClure, Bruce Conner, Charles Plymell, Alan Russo, Glenn Todd and others we all gathered at the press or would swing by there almost daily. Then in the evening we would sometimes go to the Place or the Coffee Gallery in North Beach. I first met Alan Ginsberg at the press in 1959, I was making poster for Philip Lamantia poetry book, that Dave had just finished Ekstasis, on the cover were 4 photographs taken by Wallace Berman of Philip shooting heron. The posters were very colorful monoprints and Ginsberg complemented me for my work. When I first visited San Francisco Alan Russo and I rented a room in the Hotel Wentley.  Dave had printed a book of John Wieners called Hotel Wentley. I ask John if he would pose for a portrait, he agreed and we met in my room at the Wentlry. John pulled out a big joint and we fired it up. He really liked the early stages of the painting but I kept painting and it took a while. After I finished the work John looked at it with some indifference, didn’t say much and left. Later I gave the painting to Dave who hung it in the shop. We received letter at the shop from Morocco with chapters of what was to become Naked Lunch written by William S. Burroughs. His writing really blew our minds. It was an exceptional time in history a convergence of creativity; the avant-garde and a unity of spiritual transcendence plus of course the usual suspects.

It felt very good when George Herms put me in his MOCA west show (Xenophilia 2011,). When I was the Artist in Resident at Mount St Mary’s (we literally looked down on the Getty).  I am artist in residence and curator now at Beyond Baroque Arts Center. I get a lot of pleasure from volunteer teaching silkscreen at the Local Santa Monica Collage. The worst maybe is the rejections.  “ I am sorry we are going with a more establish artist…”

Do you think that your art comes from the heart, the brain or the soul? 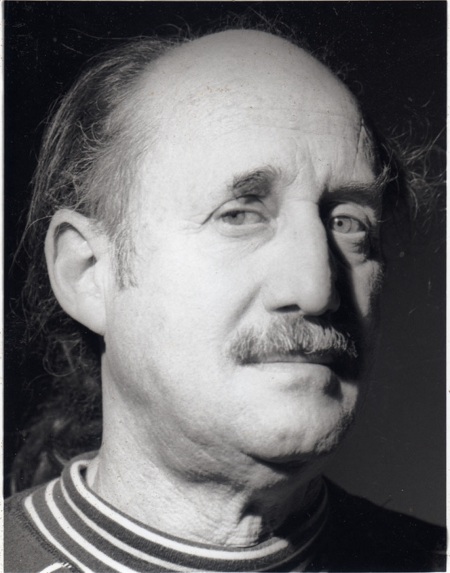 All three and from the void, (shinyata from Sanskrit it is translated into Tibetan as shinay) Emptiness. When its working its mindless just something I do; its like a mediation like being connected to the great Oneness, it flows timelessly. It’s also something I need to do, its what I do to be happy. There was a time I had serious doubts about being an artist, I ask God, why am I doing this its not solving the world’s problems or seeming to helping anyone. The Higher power gave me to believe that was I was to do my art, and not worry about the outcome. As for the rest, like everyone you have to keep your head clear, heart open and clean your-side of the street.

Why did you think that the 50s 60s avant-garde/underground art continued to generate such a devoted following? The culture was represses spiritually, sexually and intellectually.

The fact that people wanted out of this repressiveness, American’s were hungry for Spirituality and sexual freedom it wasn’t just hedonism the artist were breaking the old molds their influence on the culture was immense. Bankers in Po Dunk were missing a day at work to smoke a little grass and drink some wine and have sex with their girlfriends who wore black stockings and heavy eye makeup. They were playing bongos and reading poetry aloud. In retrospect this may seem superficial but the fact is the seeds we planted by the artist, and the time was right for a flowering

We are all One

I can only be in the Now the rest don’t matter somehow.

What mistakes of your generation would you want to correct?

With hindsight there were failings like people overdosing on drugs, needles violence and on and on, but having bin in the state of “One-Ness” I see that everything is exactly as it should be, Perfect. Bob Branaman at his little workshop in Big Sur, Photo by Richard Messenger

When did you last laughing and cry and why?

When I lost a stepson and later when I lost my lover. Thank God I laugh every day, the more I laugh the better the day. “A day without laughter is a day wasted.” Charlie Chaplin

I would love a day in Shangri La (if I did moor of my meditation practice I would be spending more time their) I don’t know what I would say, just being in the presence with Milarepa or the Dalai Lama would be enough, if I had questions it would have to be in that moment.

Of all the people you’ve meeting with, whom do you admire the most?

There is a long list and if I named one I would have to try and name them all. At this time the artist and people around Beyond Baroque Art Center and the students, teachers and artist at Santa Monica Collage. We are all Buddha Nature.

Poetry, Beats, Painting are the background to so much blues, jazz & psychedelic music. Why do you think that is?

It’s all got rhythm, even though some has foreign roots it’s become uniquely American, and all the arts support each other plus the timing, “It’s the Groove Man.”

What was the relation between art and “psychedelia”? Can music have words and colors? 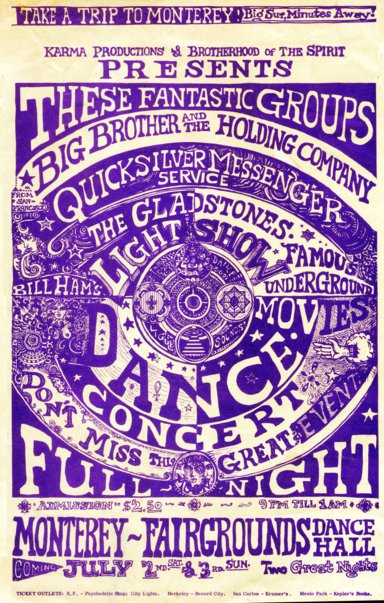 Drugs were defiantly in there (mostly pot and Psychedelics) we were striving for altered states of awareness, and higher states of conscious. It was part of the times. A Huxley’s book "Doors of Perception" had a big influence. “Huxley had realized the ways to enlightenment were many and prayer and meditation were techniques among others. He hoped drugs might also break down the barriers of the ego, and both draw him closer to spiritual enlightenment and satisfy his quest as a seeker of knowledge.” … Woodcock.

Huxley got the name for his book from Blake. “If the doors of perception were cleaned everything would appear to man, as it is, infinite. For man has closed himself up. Till he sees all things through narrow chinks of his cavern.” From William Blake’s poem the Marriage of Heaven and Hell. Taking mind expanding drugs or any drugs doesn’t make one an artist, though many artist at this time did in the search of expanded consciousness plus to get “High”. Almost 30 years ago I quit using drugs and alcohol having chosen meditation, exercise and prayer as what worked best in my life. Music can be like mediation and connect us to everything. When I work I have the music going.

How do you describe Bob Branaman sound and progress, what is your music philosophy?

Blow hard and soft but just keep playing. If it’s not a solo piece listen to others. We become the sound and the silence. I don’t really consider myself a musician any moor I still have an old upright piano, and an electric one, plus some other interments, but not the discipline to practice or start a group.

To have everything! (yet where would you keep it).  The nightmare would be to get everything.

What MOTTO of yours you would like to say forever?