"The Blues is something that you are born with. You either feel them or you don’t."

Born into a show business family, Nelsen was already a professional musician at 15. A true "Blues Journeyman" Nelsen earned his stripes playing tough, gritty joints and taverns of the East Coast Blues Circuit. He opened for and shared the stage with such greats as Muddy Waters, James Cotton, Matt "Guitar" Murphy and Pinetop Perkins. 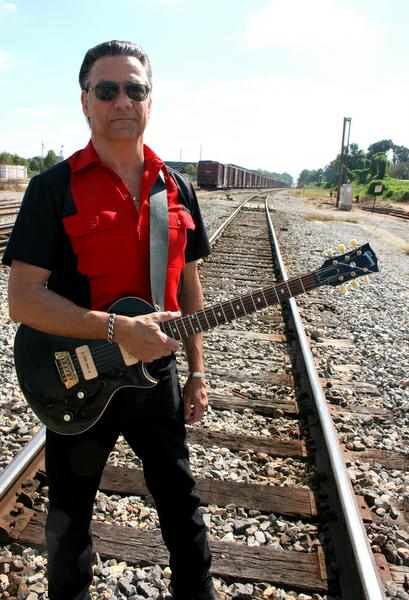 Inspired by these legends, Nelsen developed a melodic driving style on both guitar and harmonics. A world class blues vocalist, Nelsen's voice is truly an expressive instrument. Striking the right balance of torment, and tenderness so essential to this style.
Nelsen recorded his first solo album "Blues Got A Hold On Me" with J Bird Records in 1999. Strong local sales and southern air play got him a deal for his second album with then fledgling label Hot Rod Records. His third album was a send up to the Louisiana style of Blues that has influenced Nelsen throughout his career. "Take Me Back" is a true showcase of Nelsen's vocal ability as well as showing off his songwriting skills, and his proficiency on guitar, harp and piano.
The new release is South By Southwest. The title has nothing to do with Austin's annual music festival, but it best describes Nelsen's musical journey from Los Angeles to his new home in McComb Mississippi.
Recorded at Audiophile Studios located in the heart of the French Quarter in New Orleans, with Louisiana natives James Slaughter on bass and Greg Worley on drums the rhythms are simple but infectious and steeped in a southern groove.

Nelsen, when was your first desire to become involved in the blues & who were your first idols?
When I was a teenager in the late 60s a friend played me a copy of BB Kings “Live At Cook County Jail”. It sent shivers up my spine. I was hooked. I had friends that were record collectors and through them I discovered Muddy, Buddy Guy and Jr Wells and of course Little Walter. I bought the album Buddy Guy and Jr Wells play the Blues and learned every harp lick on the album. I played that thing till I about wore it out!! So I guess you can say BB King was my first inspiration and then Muddy, Buddy, Junior and Cotton filled in the blanks for me. 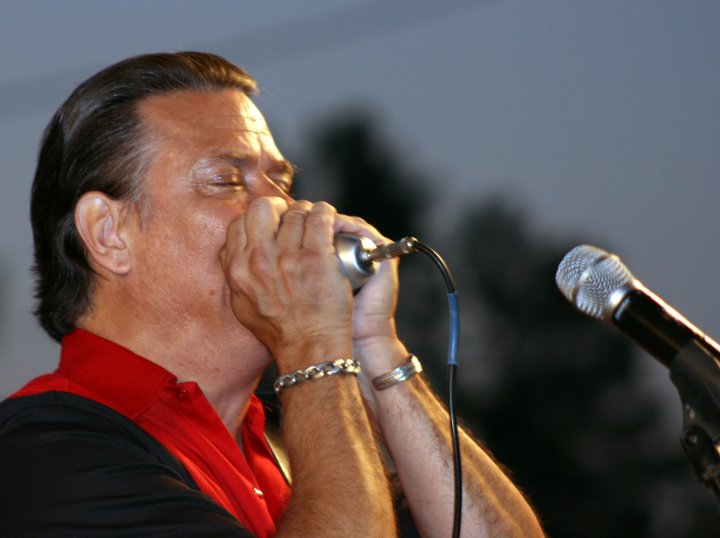 What was the first gig you ever went to & what were the first songs you learned?
We used to go to an all ages club to see local bands play when I was 14. I saw an early version of an American band called NRBQ and loved the guitar and piano jamming back and forth. I also loved the live sound of the drums and the effect that the bass guitar had on your body. You could feel it more than hear it. My first Blues show was at a little club on the east coast out in the middle of the woods. It was a group of white kids playing Chicago Blues to the best of their ability and backing up Howlin Wolf!
The first song I learned to play on guitar was “House Of The Risin Sun” when I was 14. From there I started to pick up song books with chords charts in them. I got the basic chord progressions down and developed my own style of playing rhythm guitar.

How/where do you get inspiration for your songs & who were your mentors in songwriting?
I take my basic song lyric ideas from my own life experience. Playing the festivals, clubs and juke joints around the south you see a lot of real life drama. It’s those experiences that have inspired my songs.
My mentors in song writing for guitar are BB King, Freddie King, and Muddy. For harp it’s James Cotton and Junior Wells. On piano is the New Orleans side of the music there’s Professor Longhair, Champion Jack Dupree and Allen Toussaint. 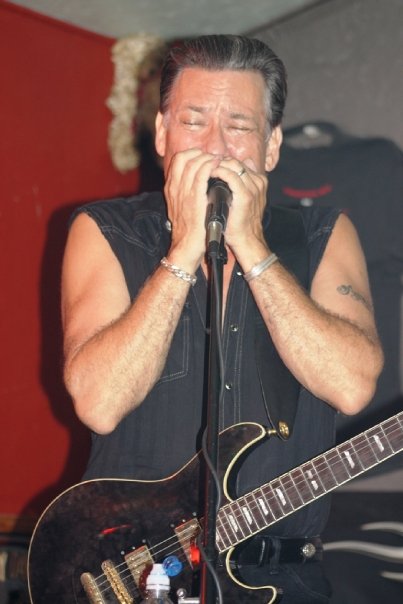 What characterize the sound of Nelsen’s blues? How do you describe your philosophy about the blues way of life?
I need to go back in time for a minute on this question. Back in the 70s when I started playing live shows the point of view from the Blues legends that we opened for and jammed with was: Black folks from Mississippi, Lousiana and Chicago played the Blues. White guys played Rock and Roll. I know that sounds very prejudice, but even among the white record collectors I knew and the diehard Blues fans it was an excepted truth. White boys played “Blues Rock” which communicated to the white audiences. I once heard an interview with Ray Charles who said “The Blues Brothers” (Belushi and Aykroyd) had done more to promote the Blues than any Black Blues artist at that time. Of course earlier in the 60s it would have been the Stones, Clapton and Lead Zeppelin. My promo people will probably argue with me on this as they market my music as Blues, but from my perspective it’s Rock, or Blues Rock.
The Blues way of life for me is playing just about any club around the south that will hire you. From large venues to the smallest Juke Joint. Anywhere where people love the Blues. The traveling isn’t as easy as when I was younger, but the fans and friends we meet along the way make the trip well worth it.

From the musical point of view is there any difference and similarities between a guitarist and harp player?
I blew harmonica in a recording session in Los Angeles back in the 80s and a producer asked me if I played guitar because it sounded like I was playing guitar licks on the harp. This struck me sort of funny because I never thought of what licks to play on harp or guitar. I just try to find a melody that will work with and contribute to the overall sound of the song. I think of the harmonica as an extension of my voice. Sometimes I make vocal noises through the harp as well as play. The guitar is a rhythm instrument for me. My rhythm and leads are played to accent the rhythm of the songs to help the listener feel the music. No matter what instrument I play I aim to make the listener feel some emotion when they hear the song. Either happy or sad or mad. Whatever the tone of the song is trying to convey. 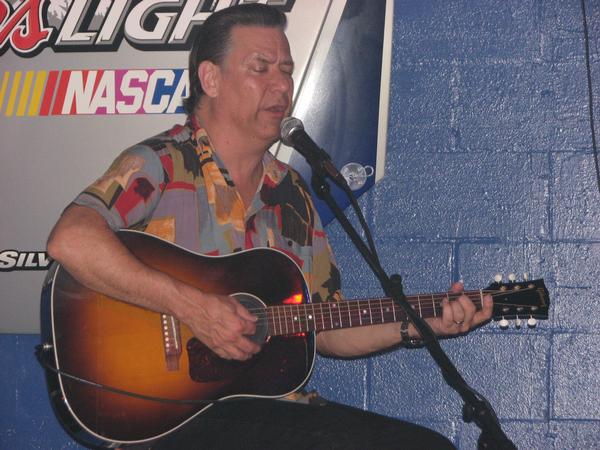 Which memory from Muddy Waters makes you smile?
My favorite Muddy story : When I first met Muddy, we were playing a Blues Festival on the East Coast opening for Muddy’s band. He had just played the White House for a private party for Jimmy Carter. The whole band was tired, but were in a great mood after playing such an important gig. My wife was standing back stage with Muddy and the band when we went on. When I started to sing he turned to my wife and said “That boy can sing!”

You have shared the stage with such greats as James Cotton, Matt "Guitar" Murphy; and Kenny Neal. It must be hard, but which gigs have been the biggest experiences for you? And why?
Looking back over the past 35 years there are so many to choose from. Muddy was a very sweet man, James Cotton is real character and loved to party when we played with him. Matt Murphy was another sweet guy who was always willing to offer advice.  My favorite gigs were the small clubs we’ve played where the audience was close to us and feeling the music right along with us. The last time I played with Kenny Neal, my band was playing a little Juke Joint in Lousiana called “Teddy’s Juke Joint”. It was a week before Christmas and in strolls Kenny. He came up on stage and insisted on playing all Christmas songs! The crowd went wild. Are there any memories from Audiophile Studios located in the heart of the French Quarter in New Orleans, which you’d like to share with us?
Recording the South By Southwest album at Audiophile was such a pleasure. The building sits right on the edge of the French Market. So the day would start at Cafe Du Monde for coffee. We would record till around 2:00 then break for lunch at Coops Place. Their red beans and rice are the best in town. Then back for more recording and dinner could be anywhere. You can’t go wrong in the Quarter. The studio was the most comfortable I’ve ever been in. They made us feel right at home and I fell in love with the sound we got. It made for a great album.

Some music styles can be fads but the blues is always with us. Why do think that is? Give one wish for the BLUES
I did an audition for an A&R man back in the early 80s. He liked the music and loved the Blues, but it wasn’t what they were looking for at the time. What he said was “Don’t ever quit playing the music that you love” The Blues has always had an audience. I love to see young people out and supporting it because it means we have a future. The wish I have for the Blues is to keep on doing exactly what it’s been doin since the earliest Blues song. It expresses folks emotions about life. Joy, sorrow, frustration and celebration! What does the BLUES mean to you & what does Blues offered you?
The Blues is something that you are born with. You either feel them or you don’t. It’s a gift to be able to express myself through the music to either celebrate life or to express my frustration or sadness about something that I experience or that I see others experience in life. And if you love the Blues you know what I mean.

What is the current state of the blues scene in McComb Mississippi where you live?
McComb is a sleepy small town about 90 miles north of New Orleans. I love the rural setting.. It’s a perfect place to live for a songwriter. Friendly people and some great food.  They put up a Blues Trail marker down on main street next to the train station for Bo Diddley cause he was born here. He came to town for the dedication. We don’t have much of a current Blues scene here now, a few Juke Joints and clubs, but there is talk about a Blues festival in the future.
If you’ve never experienced Southern Hospitality you need to take a vacation down here. I recommend anyone who plans to visit either New Orleans or Memphis to take a day or two and rent a car to travel to the Blues trail markers. Take the drive down highway 61 and 49. There’s so much Blues history in Mississippi, it’s really worth taking the time to enjoy. And don’t forget to stop in McComb. Tell em Nelsen sent ya.