"People love good music when it is played well and with passion. Blues is a style of music which I believe has to be sung with meaning, and it has to be played well... and with feeling and a delicate touch."

Blues Boys Kings are an outstanding blues band who are based in the midlands. They perform all over the UK and earn legions of new fans at every concert they play. The sound is bluesy but modern, rootsy yet current. Jason North plays lead guitar, sings lead vocals and is the chief songwriter. Over the last ten to 15 years Jason has written around 40 or 50 original songs, and now wishes to promote these. The Blues Boy Kings are made up of Jason North and Samantha North on vocals and bass, Mark Barratt on drums and percussion and Phil Aldridge on organ. Jason North started playing guitar in 1985 and formed his first full blues band in 2000, around popular covers and whilst writing original tunes on an 8 track recorder. Sam North was on the other side of Lincoln, learning the bass and forming a rock covers band, Local Heroes. In 2007 Local Heroes needed a singer to deep for their singer, who was on holiday and doing a lot of karaoke jobs. Jase stepped in and met Sam for the first time. Sam introduced Jase to the Red Hot Chili Peppers and Jase introduced Sam to Chicken Shack. In 2010 the couple went to Las Vegas to get married. On their return, they started to rehearse a bunch of old original songs from Jase's days with the 8 track. Their debut album was born at Tabby Road Studios. Since then, the lineup has expanded to a five piece with Stevie 'Keys' Gooding on organ/piano and Dave Taylor on Saxophone. They second album "Second Time Around" released in 2013 and now the band working on their third album which promises to be another outstanding example of why this band is so sought after by venues and festivals alike.

Being a blues musician and writer has taught me that I can channel negative or unpleasant occurrences in my life, and by writing a song about them I can turn them into something positive - a cathartic expression of creativity. The blues is my favourite genre of music as, in my opinion, it allows the most artistic freedom... and the lyrics often take a sad subject matter to tell a story, but in the end, the audience learns something personal about the performer... and the singer feels better for sharing it.

How do you describe BLUES BOY KINGS sound and songbook? What characterize your music philosophy?

I don't know about musical philosophy... I often listen to the above artists, along with Elmore James, Howlin Wolf, Albert King and many more. Listening to their legacy of music puts me in the mood to write something... I get a musical idea, then paste my lyrics into it, which is a personal experience I have been through. 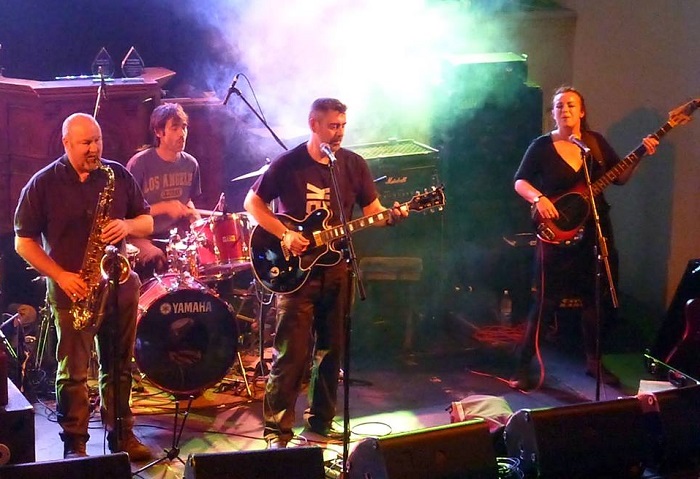 "I miss not being able to go and see great acts such as Peter Green and Gary Moore. I miss the characters, such as Muddy, Freddie and the Wolf. Those guys had to get their act right and play with heart and passion."

People love good music when it is played well and with passion. Blues is a style of music which I believe has to be sung with meaning, and it has to be played well... and with feeling and a delicate touch. When these elements are fulfilled, then people will buy the CD or attend the concert, to hear those qualities.

I've seen Peter Green three times and met him twice... He is a great ambassador for the blues in this country and blues fans in this country would love to see him play again. Because he has that star quality - a great song writer, with a passionate vocal delivery and a beautiful deft touch on the guitar.

The most important musical and personal meeting was meeting Sam Skidmore (now Mrs North) in 2007. If it were not for her, Blues Boy Kings wouldn't exist and people would not have had the opportunity to hear the songs I had written before we met. She gave me the belief and direction for the songs to become something worth developing.

Beyond that, the two meetings with Peter Green were special... In 1990 I also met one of my other idols - Mark Knopfler. He was the reason I began playing guitar in 1985. Prior to that I wanted to be a keyboard player.

I am also blessed to have known all of my grand parents, three of whom were musical. I believe that they are looking down on me and proud of what I do, and that is important to me.

The best advice I had was when I was a lead guitarist in a band in the late 80s, someone said to me, "If you're not the singer, then you'll always have to play the music that the singer wants to do". From that day to this, I have striven to become a better singer, so that I can be true to myself, musically. 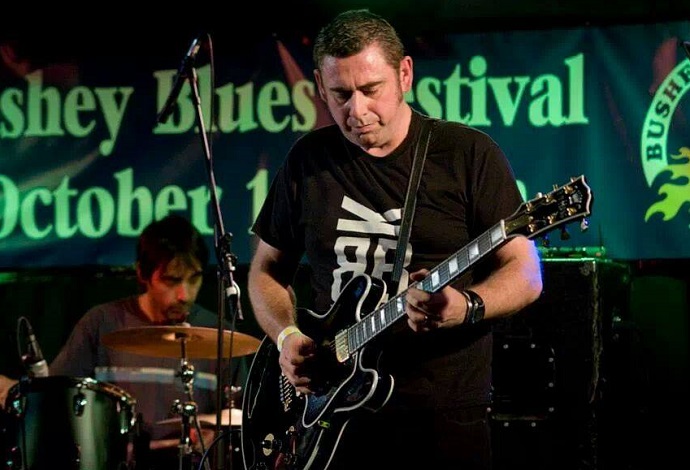 "Being a blues musician and writer has taught me that I can channel negative or unpleasant occurrences in my life, and by writing a song about them I can turn them into something positive - a cathartic expression of creativity."

I was lucky enough to jam with Barbara Blue at Sullivan's on Beale Street in Memphis in 2002, and then jammed with a band up the street in B.B. King's.

In 2006 I was in Chicago at Buddy Guy's on South Wabash, and I got to jam with Bobby Dixon... Willie Dixon's son. All three of these jams were pretty special.

I got to see up close some real American blues players, and it was quite an experience.

I miss not being able to go and see great acts such as Peter Green and Gary Moore. I miss the characters, such as Muddy, Freddie and the Wolf. Those guys had to get their act right and play with heart and passion. Because if they didn't, they would have to go back to hard manual jobs. So they learned to play tight, and be the hottest bands in town.

My hope is that more and more people (like X-Factor viewers) will get turned on to live music, played by people with real talent and support great blues bands in their area and increase the footfall in such venues that are trying to provide those acts.

My fear is that they won't and that more and more venues will close, leaving less avenues for musicians to perform... leaving trendy winebars and cheap price pubs that put no music on at all.

I would like to go back to 1977, prevent Elvis from dying - and seeing what his musical output would have been between then and now... 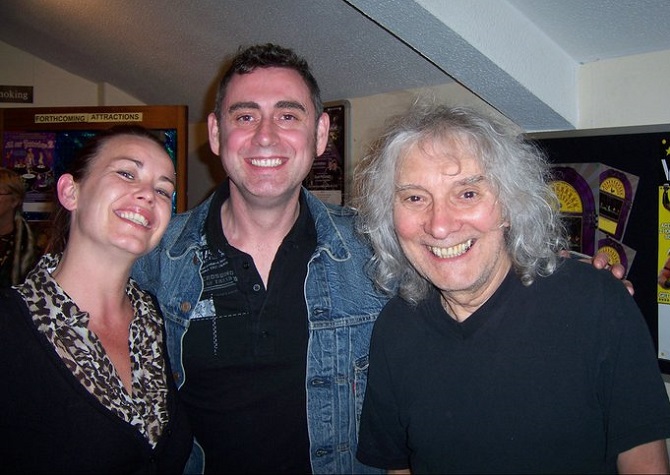 "I believe that nowadays, people are less inclined to listen to such an eclectic mix on what is purporting to be a 'pure' blues album." (Photo: Jason with Samatha & Albert Lee)

What are the lines that connect the legacy of Blues from United States to UK?

There are so many, and they have been well documented... Blind Willie McTell to Ralph McTell, Robert Johnson to Eric Clapton, B.B. King to Peter Green, Ledbelly to Lonnie Donegan... The late fifties and early sixties in Britain was when Chris Barber, Alexis Korner and John Mayall did so much to bring the music of all the greats to UK shores, either by booking them for tours, or acquiring their records and trying to emulate them. Not borne out of wanting to steal their material; but out of respect to it, to want to bring it to the attention of more people. And in doing so everyone was a winner - UK bands and US artists alike.

From the musical point of view what are the differences between 60s British Blues Boom with current scene?

Again, in the 60s, so much hadn't been done yet. So, in the case of Fleetwood Mac for instance, their blues albums had songs such as World Keep On Turning and I Loved Another Woman - classic blues tracks... alongside tunes like Oh Well, Green Manalishi and Albatross, which are clearly rock tunes as opposed to blues. But they worked. I believe that nowadays, people are less inclined to listen to such an eclectic mix on what is purporting to be a 'pure' blues album.

In your opinion what was the reasons that made the UK to be the center of the Blues Folk searches at the 60s?

We British have always looked to the US for inspiration and guidance for the next cultural big thing... and we're usually about 5 years behind them. So when Skiffle came out, UK music fans naturally wanted to dig deeper and find out what was the root of this new type of music... I think of Skiffle as like the UK version of Rock n Roll but without the decent instruments and drum kits. 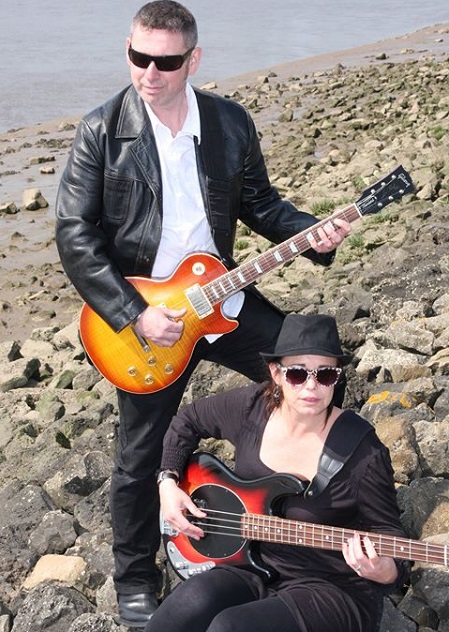 Buddy Whittington's song on Six String Svengali about taking Viagra to cure erectile dysfunction is very funny. I was touched to see Jeremy Spencer come back and make some more albums... That can only be a good thing, as he is a great player, with a great voice. I'd love to see an acoustic duo album with Jeremy and Peter.

"The blues is my favourite genre of music as, in my opinion, it allows the most artistic freedom..."

Well there's personal family stuff which would come first... but that aside, from a musical point of view.... Probably Woodstock 1969 would be good to revisit.

Jimi Hendrix, The Doors, Janis Joplin, Canned Heat, Paul Butterfield with Mike Bloomfield etc I would love to see that!