"I think that everybody, at some time, feels lonely, desperate, hopeless, ashamed, and unexplainably angry. The blues is taking those experiences, weaving them to a melody, a lyric, an improvisation, and relieving yourself of that pain."

Giles Corey is the singer, guitarist, and songwriter for the band Lubriphonic, a horn driven soul and funk band that has toured through the U.S. and Europe and enjoyed slots on some of this countries most prestigious festivals over the last 10 years.  In this newest musical adventure, Giles has moved to a more stripped down, rootsy sound, more in tune with the blues music he began his career with as a teenager in Chicago. 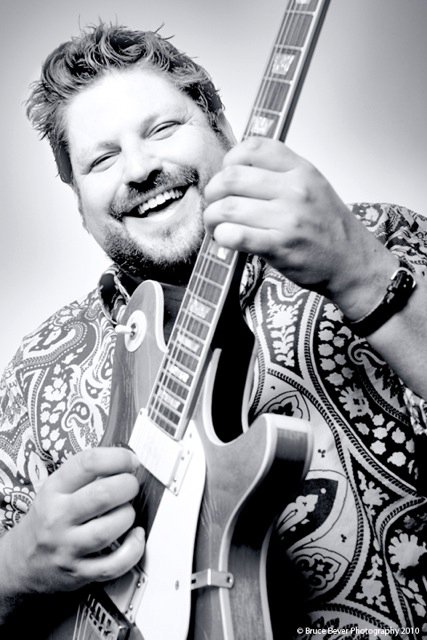 Giles Corey combines grainy, passionate vocals and leaping guitar lines in a performance that is earthy and unique. As a veteran of the Chicago music scene, has toured and recorded with blues greats like Billy Branch, Magic Slim, Otis Rush, Eddie "The Chief" Clearwater, and Syl Johnson. Since Giles began his career at age 18 in 1992, he has played concerts and festivals across North America, Central America, Europe, and Japan, and lent his guitar stylings to over a dozen recordings. Currently, Giles fronts the up-and-coming Chicago roots rock band Lubriphonic. The band began with a residency at the legendary "Checkerboard Lounge". Their day gigs had been touring with Koko Taylor, Buddy Guy, Otis Rush and other bands but they had ideas to create something new. Since 2008 the band has been playing shows across the country. They have released four studio cd's and numerous live shows. He has been also a member of Mississippi Heat since 2006.

I think that everybody, at some time, feels lonely, desperate, hopeless, ashamed, and unexplainably angry. The blues is taking those experiences, weaving them to a melody, a lyric, an improvisation, and relieving yourself of that pain.  If you are really good at it, you can make other people feel better as well.

How do you describe Giles Corey sound and progress, what characterize your music philosophy?

I started playing music as a teenager playing only blues music.  After a while, I felt trapped by the rigid guidelines of blues and tried to play anything but. That’s what Lubriphonic really grew out of. I wanted to play funk and jazz and rock.  Ultimately, as I listen back… it’s still blues music, just not quite as honest.  Now, I find myself drawn to writing and playing in a way that is much closer to where I began. 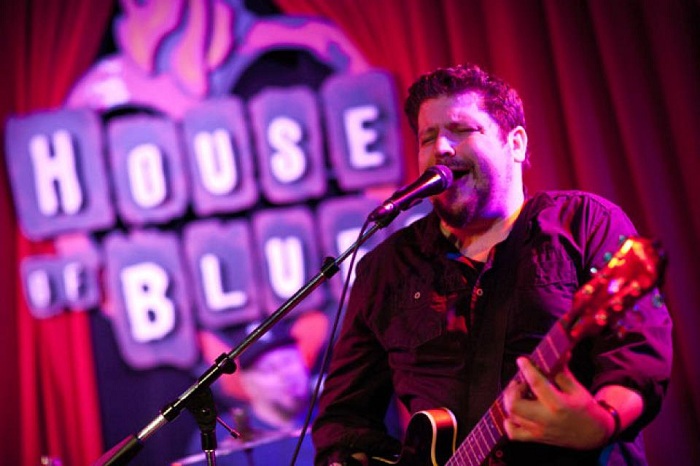 "I will pose a distinction—Blues music has a devoted following.  For example, Muddy Waters and Howlin’ Wolf are very popular long after their deaths; their music is even used in feature films and TV commercials." Photo by Bruce Bever

It’s not the experiences—we all experience the same things, really.  It’s the observation, the interest, and ultimately the empathy for other people, that will make you a good writer, blues or otherwise.

The most interesting period of my life is now--- I have no idea how it will turn out.

I will pose a distinction—Blues music has a devoted following.  For example, Muddy Waters and Howlin’ Wolf are very popular long after their deaths; their music is even used in feature films and TV commercials.  Current blues musicians… not as much.  I think that, for a variety of reasons, newer generations of blues musicians have not had the opportunity to express their true voice.  They have been living in the shadow of legends, and have been expected to write parallel to that model.

Do you remember anything funny from Lubriphonic? 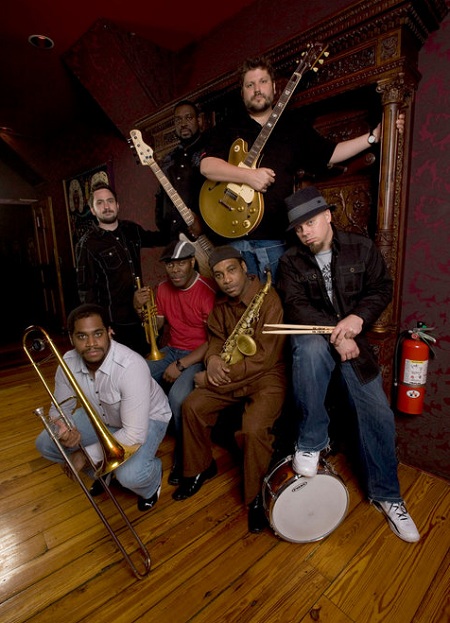 Everything that ever happened in Lubriphonic is funny to me… now.  There’s nothing funny about the rest of them.

"I hope the Blues gets hip again. When I found the blues as a kid, there was no internet."

When I was 19 years old I was playing with JW Williams every Friday and Saturday at Kingston Mines. One night, his keyboard player could not make the gig, so we performed as a trio. Then, Buddy Miles comes in.  He sat in with us on drums and sang, JW played bass, and I played guitar. It was a faux “Band of Gypsies” with me on guitar, playing all of those tunes.  I was in heaven.  I got back to my dormitory and sent bragging emails to my friends for hours.  It’s the early memories that get you.

The best advice I ever got was from my first boss, Buddy Scott (his grandson, Joewaun Scott, is on my album). The advice is not verbal. I would take the 63rd street bus to his house on Wednesdays, and he would show me “what you need to know to work as a guitar player in Chicago.”  I still use those skills. He said, “You got those fast fingers, but that won’t get you work.  You’ve got to get your rhythm and comp down.” That’s the truth—for anyone.

From the musical point of view what are the differences between Chicago and other local scenes?

There’s not much of a difference anymore. When I came to Chicago 20 years ago, it was very different. There was a host of music venues on the South and West Sides of Chicago, featuring a diverse variety of soul and blues music. That’s gone now- most of the patrons of these places have passed, and there was nobody to take their place. To take the perspective a bit further, when we were recording at Delmark, there is a poster on the side of the refrigerator in the break room.  It is a 1979  listing of a random Saturday’s blues shows—Buddy and Junior, Son Seals, Little Milton, James Cotton—all on the same block!  It can happen again, but we have to be honest and creative, like our predecessors.

What are your favorites places in Chicago and how you would spend a day with Lez Zepp and Stones in the town? 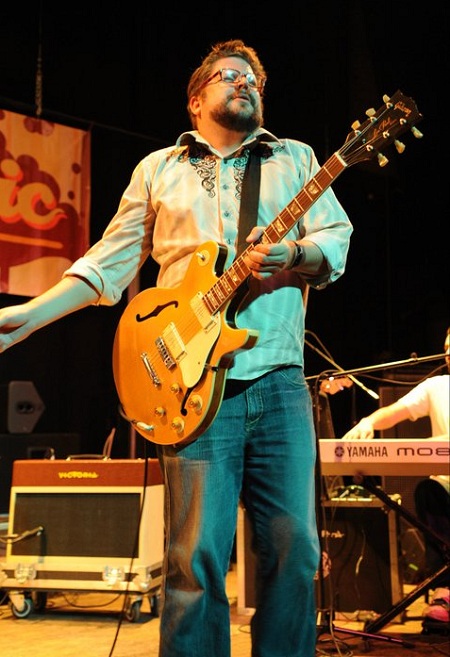 I would take all of them to the ferris wheel at Navy Pier… and just watch what happens.

"It’s the observation, the interest, and ultimately the empathy for other people, that will make you a good writer, blues or otherwise." Photo by Kirk West

What do you miss most nowadays from the past? What are your hopes and fears for the future of Blues?

I hope the Blues gets hip again. When I found the blues as a kid, there was no internet.  I had to hear rumors about Muddy Waters.  I had to ride a bike to three different record stores, asking the kid behind the counter, “Do you have Muddy Waters?” They would reply, “Who are they?” “No!—It’s a guy who… nevermind” The point is, I was invested.  It moved me, like punk rock moved other kids.  Jack White and the Black Keys are playing blues all day long, but they don’t dare call it that for marketing reasons.  It’s hip music… it has become old people music from a marketing standpoint.  I hope that changes.

What's been their experience from the road with the blues in Europe? Which memory makes you smile?

Like everything else, my first time makes me smile. My first time in Europe was a festival in Finland with Syl Johnson, about 2 weeks after graduating school. When we arrived at the airport in Chicago, Syl realized his passport had expired. The rest of us got on the plane, arrived in Helsinki, and calmly told the promoter that Syl was on the next plane. We had no idea if Syl was on the next plane.  Then, they had a press conference scheduled… which somebody had to attend.  So, the bass player and I answered questions for the festival press conference about Syl…who…might be there the next day.  It makes me smile now, but… yikes. Syl made it in time for the show.

What are the lines that connect the legacy of Blues with Soul and continue to Funk and Rock music? 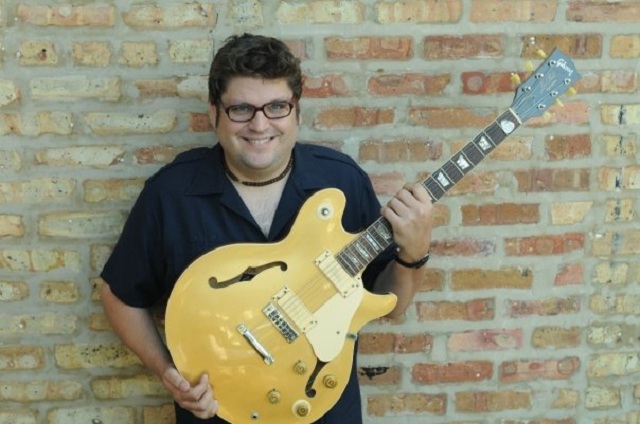