Christopher Garcia is one of those musicians who always seems to be on stage when amazing things are happening. I'm not sure he knows how many different groups he's currently playing in, but it's a lot. In addition to teaching all over the world, he's played with a jaw-dropping who's-who of musical luminaries, not the least of which is his gig as drummer with The Grande Mothers, original members of Frank Zappa's Mothers of Invention. Chris was born, raised, and still resides in East L.A. (Never to be confused with West L.A.). His background includes performances in a wide variety of musical settings including; Jazz, Rock, Blues, World Music, traditional Mexican music, pre-Hispanic music, percussion ensemble, soundtracks, and cartoon music. He attributes his musical growth to his studies with Professor John Bergamo, Pandit Tarnath Rao, Swapan Chadhouri and Leonice Shinemann where he studied tabla, while attending California Institute of the Arts on a full scholarship. Chris was also a member of the award winning Cal Arts Percussion Ensemble in 1979. 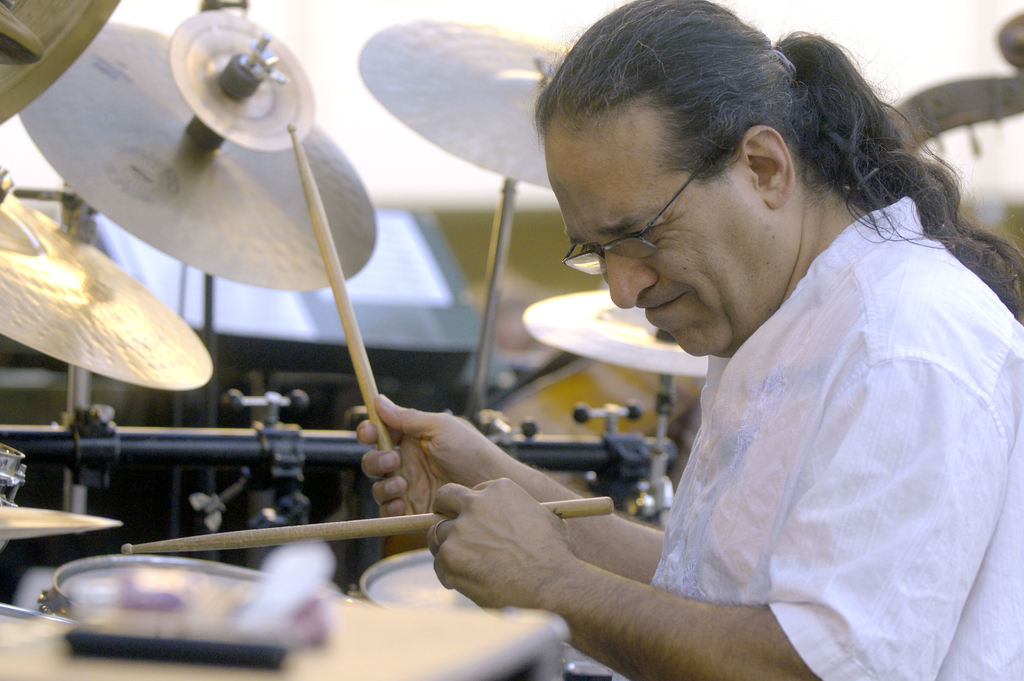 He attributes his "style"(?) to Listening to EVERYTHING, logging in thousands of hours, practicing, rehearsing,performing and touring constantly with musicians interested in stretching and reinventing themselves throughout the United States, Canada, Europe and Southeast Asia.Chris' drumming is unusual in that it incorporates not only the standard rhythms and their permutations, but also a fluency with odd time signatures and sonic textures, which he seamlessly incorporates into his playing.

His fascination for New Music and Sound as well as the advent of MIDI technology allow him the possibility of combining textures that have never before been available for the percussionist in live performance. Playing tabla next to state of the art MIDI instruments and being able to blend them musically is a challenge he continually explores.

Still working on it i.e., making myself a good musician,
but in general, playing with musicians who are more knowledgeable is always 2 steps forward,
and I am not speaking of music on "technical terms" but on musical terms.

There is no substitute for MAKING music not PLAYING music, but making music with REAL people
in REAL time.

You cannot learn how to cook by studying cook books and never cooking,
you have to break out the pots and pans try different things and make a mess
and add what you like in order to make a WONDERFUL meal and learn from it.
The Meal, no matter how well you learn to replicate it will never be the same way twice.

Rhythm to me is the rhythm of the world, i.e., everyone's individual heartbeat in relation to eachother
and our mind(s) being wherever it happens to be.

Mother Earth is where we come from, and sometimes forget, that regardless of our mind set,
we are part and parcel of MOTHER EARTH, and we are all related,
and held together by our similarities instead of separated by our differences.

Music is a "COMMUNAL" action, where everything and everyone needs to work in such a way that the TOTAL OUTCOME surpasses any individual contribution, and we always have to be forgiving to ourselves and to the other musicians in order to create something that we would not have been able to create by ourselves.

In order to surpass ourselves collectively we need to leave our egos at the door and let the MUSIC be.

How would you describe your contact to people when you are on stage?
I am answering this in regards to the musicians on stage instead of the people watching the performance.

Depends on the music being made, but I prefer it to be aural, and not oral.

You do not rehearse to know what you are going to play, you rehearse to be comfortable
to go anywhere at any given time in time when the moment arises.

Different music calls for different roles at different times, what you play in a bebop improvisation and format
is very different from the classical music of North and South and India and the indigenous music of Mexico,
where all of these musics contain improvisation but not in the same way. 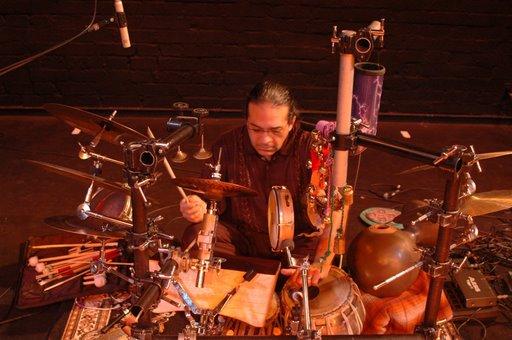 From the musical point of view is there any difference between African / Asian and Latin American percussions?

Most Latin American and African percussionists tend to play patterns oriented rhythms,
Africa is the ROOT and a lot of "Afro-Cuban/Afro Caribbean music revolves around individual locking parts
and patterns, as does music from the Middle East.

Where as percussionists that I play with that are from Japan, Korea, and India play less pattern specific grooves.
They do not play cyclically, i.e., a repeated pattern, they play WITHIN the alotted time frame and the time is more mercurial.
But of course there are always exceptions to the rules.

Why do you play drums/ percussions?

The power of the rhythm is what drew me to percussion and drums.
The ability to move physical and spiritual mountains within people and ourselves
and touch a place that many have forgotten still exists within themselves.

We are all tied together with a universal rhythm, the rhythm of our heartbeat,
which every person shares regardless of race, color or creed or country.

Most of us had at least 9 months of rhythmic training before setting foot on the planet.

What does music offer you?
Life, livingness, beingness


Which is the most interesting period in music and why?
NOW!!!!!!!
Now has never existed before, music and people from different cultures sharing the same space at the same time
and immersing ourselves in eachother is a constant inspiration to me.

I am constantly learning and being humbled by the greatness of the musician. 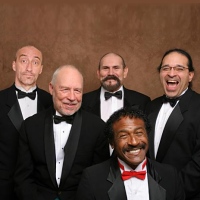 With ZAPPA music there are so many great musicians who happened to play drums in his arc that there is always  much to learn, how each person approached the music and responded to it is so individual and usually so right for the music.

When all is said and done, it depends on the music I am playing,
I always do my best to allow the music to happen, without imposing my will on it, and when that happens,
the music is beyond words, beyond any individuals contribution beyond the individuals on stage,
the audience becomes part of this thing that is not tangible and for that moment in time we are all MUSIC.