Cliff Anderson talks about his experience and friendship with Jack Kerouac

"Passionate, Compassionate, never boring, brave and humble – these are some of the reasons that Jack Kerouac is a great man-he is alive through his writing, an eternal beat avatar to the truths contained in Every-man’s life!"

Cliff Anderson has worn many different hats through his life and has had many varied interests. He has been a musician, truck driver, college student (B.A. in English), journeyman carpenter, teacher, program specialist at a day treatment center for disabled retarded adults, ski bum, sailor and writer.

Cliff wrote Free Beer: Kicks & Truth with Jack Kerouac to stand up for him against the unfair critics that surfaced after his untimely death. Cliff met Kerouac (King of the Beatniks) by accident in a St. Petersburg, Florida bar. Free Beer opens with a raucous description of this meeting and shows the beginning of his friendship with Kerouac and a vignette co-authored with Kerouac is featured in the book. One hat Cliff wore with pride is that he was Kerouac's driver. A story in Free Beer, The Present, shows that he had at least on one occasion a way with fast cars to rival the great driver of On the Road fame Dean Moriarty (Neil Cassady). Cliff is presently sailing his boat Mystica and celebrating the release of his new book, Jack Learns to Play the Gypsy Guitar, an instruction book for young people

Music is a holy task – great musicians are so into people having a fun party that they freely partake of all the party favors while concentrating on the gig, maybe that’s why they have the reputation of being party animals.  What happens at the gig remained at the gig (until Kerouac came along to write it all down.)  I have been entertaining (I hope) for over fifty years and I enjoyed every gig!  Pickin’ & Grinnin’ playing my harmonica on a rack, enjoying the party favors and writing nothing down  – just looking forward to the next gig!

My father had a seven piece orchestra, Crazy Rhythm; he read music and played the violin.  I read no music. A young guitar picker, Bob Sheppard, taught me the basic guitar that resulted in my book, Jack Learns to Play the Gypsy Guitar.  Go to freebeerandjackkerouac.com to see what he taught me; an instructional story for young guitarists.

I just celebrated my seventieth birthday with a great party and my wife and I played the gig. We are keepers of the beat. Jack Kerouac had the beat and was beatific, kind, compassionate and detached from the world was he and at the same time joyous and drunk with life and alcohol too!   I describe Kerouac’s beatness in Free Beer; Rod Anstee’s incisive interview in Free Beer, with yours truly, further portrays the “madman, bum and angel” that was Jack Kerouac, but let me enhance the picture with true stories: 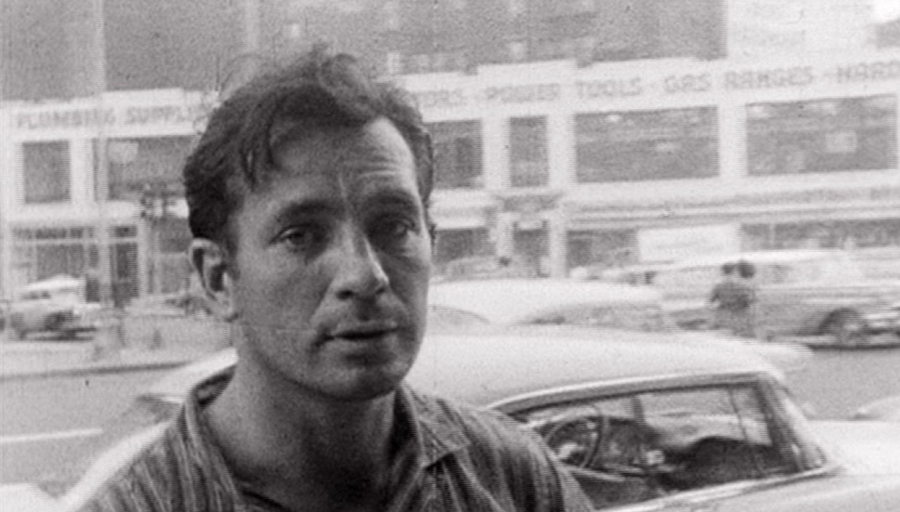 Kerouac, harp man extraordinaire, Paddy Mitchell and I spent some time with beat writer, John Clellon Holmes at his manse in Old Saybrook, Conn.  Jack and I went to the liquor store to replenish our stock of Johnny Walker Red to continue the party.  Jack was known for his pacifism and I had seen his kindness and compassion for others many times.  I said something (I can’t remember what – some wisecrack) that a man at the bar took violent exception to, standing up and coming at me when Ti Jean made a move.  In one instant he shed the navy P-coat he was wearing.  He shrugged the coat so fast it was hanging in mid-air and in front of the coat stood Ti Jean in the classic boxer’s stance, “Don’t get salty with my friend,” yelled Kerouac.  The astonished man sat back down.  So you see that Jack Kerouac would stand up for a friend, but he is famous for taking a beating if attacked.  Kerouac sailed in the merchant marines in WW2 delivering bombs to Britain. Jack Kerouac was a patriot and loved America. He stood up for America. In fact, the S.S. Dorchester that he sailed on was blown up by U – boats in the North Sea while he took R & R in England. You can see from these examples that Jack Kerouac was a very complex man.  Because Jack was so complicated and the fact that so many others have written about him I am going to switch to spontaneous prose to try and answer the many incisive questions you asked about all things beat!

Kenneth Rexroth said in a poem about Jack, “The little drunken cherub is dead.”  Kerouac showed his humanity and his soft underbelly to the world and he paid a high price - Joy was enhanced by alcohol & partying to excess – William Blake said that excess leads to the palace of wisdom – Jack was a truth teller, wisdom seeker, master of excess & the ultimate outsider – Ironically, I met British writer, Colin Wilson, author of The Outsider, at a faculty party given for him after he delivered a talk at the University of South Florida in the Sixties. I told him I knew Kerouac and was partying with him and from then on we talked to each other exclusively, while the professors stood around eating & drinking.  Next year Wilson came back to USF on another book tour and this outsider had another conversation of a high order about Kerouac and other subjects.  Wilson was beat & erudite and although I never saw or heard from him again, he caused me to realize the depth of interest in the beat avatar that is Jack Kerouac.  Once in a while you meet someone as smart as Colin Wilson or Jack Kerouac and this kindles your hope that this could be a better world.

Kerouac had no motto. He autographed my copy of Tristessa / Visions of Gerard

“My wit is short – Jack Kerouac”

Ti Jean had a live and let live philosophy of life (and then some) having given up the many ideas he had about Buddhism.

Jack’s story is an eternal one of youth and exuberance looking for a meaning to life. On the Road that is life, everything is in change. Only when you settle down does the world seem solid (and boring).  Sailing on the sea of compassion and adventure beatitude or “blessedness” Kerouac transmitted to me an exuberance for life that has lasted some forty years, even though I was already on the mystic path. 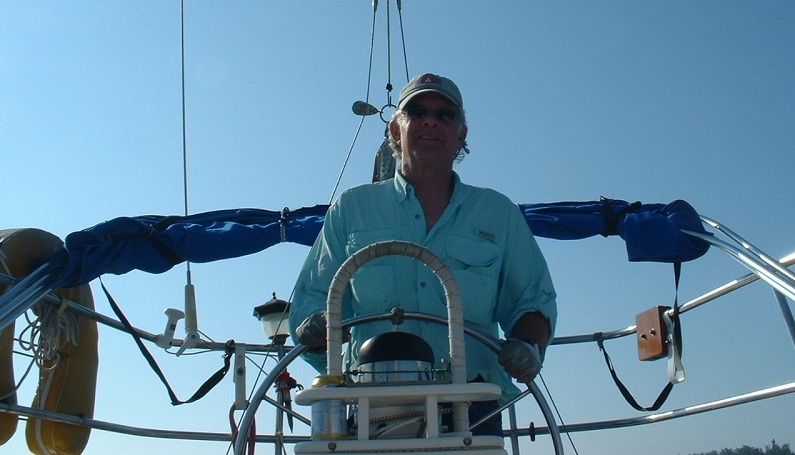 The didacticism of On the Road & Jack’s other works is sometimes well hidden,

His stories were chosen for their examples of kindness and peace.  The Dalai Lama said that his religion (Buddhism) is kindness. Jack dropped the labels and the dogma too and he was beatific in thought and action. “Rest and be kind” said Kerouac.  The scene in On the Road that influenced me, before I met him, is when he is describing the “men with cop souls” that he attempts to work with and has disastrous results.  Jack just couldn't be mean and was scared of guns.

After I first met Ti Jean we went on a wine bacchanal that lasted some ten days until he went home to his writing.  I returned to college and I told some of my friends that I had met Kerouac. They all wanted to meet him, but I always respected his privacy and took no company to his house and never even had my picture taken with him. Then, a bar in St. Pete was closing, the stock was paid for and a giant party was held to drink it up!  I invited Kerouac for some free beer and since it was Saturday night all over America he jumped at the chance.

My friends were there and since Kerouac had a red bandana in the pocket of his well worn, garage blue pants and was carrying his railroad brakeman's lantern, they didn’t have much trouble identifying the KING of the BEATS.  To my amazement and enjoyment none of them let on that they knew the author was attending although everybody knew everything.  We drank every last beer in the bar (and the buccu cases in that back room) and then faded into the night...

FREE BEER is a powerful force! 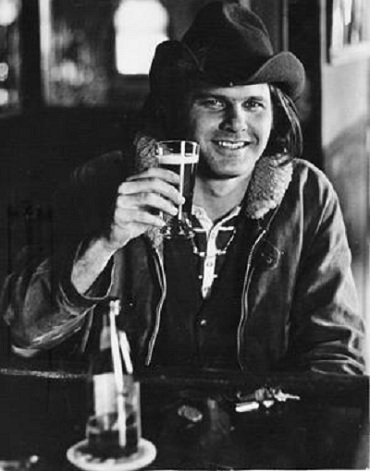 I hope I have shed some more light on the complicated holy man that is Jack Kerouac, for he remains through his works an eternal light to truth…and he is in Cliff Anderson’s heart, mind and soul…  I cherish the letter he wrote me saying that I was his fourth “best friend” along with his Greek friend and WW2  hero, poet  Sebastian Sampas,  Neal Cassady and someone else I can’t recall.  Kerouac's favorite Beat was poet, Gregory Corso.