"The blues means keeping it real. If something goes wrong, you can work it out. There is always hope."

The son of a Filipino mother and an African-American father, Jack Hadley was born in the Philippines. He grew up in the Haight-Ashbury district of San Francisco. His mother bought him an acoustic guitar at the age of twelve because she wanted to keep him busy. The family moved to Denver, Colorado, where he learned to play music by ear, playing music by everyone from Hendrix to Dylan, unaware that he was learning the foundation of American music – the blues. Jack played in a number of Denver area bands, sharpening his guitar skills and discovering his vocal talent along the way. He began performing as a solo artist and played countless shows as a hired gun. In 2005 Jack decided to focus on writing and performing his original blues-based material with his own trio, The Jack Hadley Band. That same year he was playing at a local club when he was approached by blues veteran Otis Taylor who happened to be in the audience. For the next 18 months Jack was Taylor’s lead guitarist, playing at festivals and shows all over the U.S., Canada and the United Kingdom. 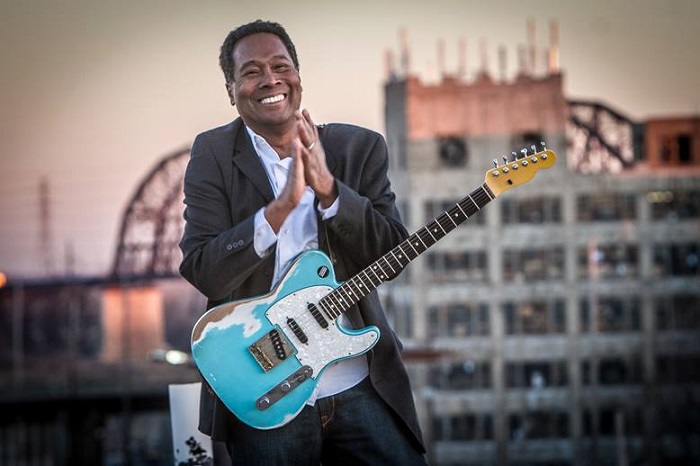 He appears on Otis Taylor’s 2007 Telarc release “Definition Of A Circle” playing lead guitar and lap steel. Notable musicians on this recording include axeman Gary Moore and blues harmonica legend Charlie Musselwhite. In November 2006 he recorded two songs with keyboard wizard Steve McQuarry at the legendary Hyde Street Studios in San Francisco including his revolutionary track "You & Me." The fall of 2007 marked the beginning of a new project with bluesman Dan Treanor. "Brothers Blood & Bone" is a fresh look at the blues today that includes songs from Treanor and Hadley along with their updated versions of classics from Blind Lemon Jefferson, Sonny Boy Williamson and Walter "Billy Boy" Arnold. In 2011 Hadley contributed lead vocals on Neil Haverstick’s “Hide & Seek” CD on Stickman Records. Jack’s career is in high gear with 2013 appearances at Blues From The Top in Winter Park, Colorado; BB’s Jazz, Blues & Soups in St. Louis; the Brighton Blues Blast in Brighton, Colorado; and the Rauma Blues Festival in Rauma, Finland, backed by the St. Louis Blues All-Stars featuring keyboardist Bob Lohr, bassist Terry Coleman and drummer Keith Robinson. His latest effort - "The St. Louis Sessions" - was released in 2014, on San Telmo Media. Recorded with the St. Louis Blues All-Stars, produced by Bob Lohr.

I have learned that everyone has the blues, no matter where you come from. If you have a broken heart, lost a job, feeling bad…it’s all blues. I also learned that I can be happy playing the blues. It can lift me up because I don’t think the blues is always about the struggle and the pain. In many ways it is just about life.

To me, the blues means keeping it real. If something goes wrong, you can work it out. There is always hope. Whatever I have suffered is nothing compared to my ancestors and my immediate family. If they can make it, I can make it, too. The blues is not a style but an attitude, a calling. It is an emotional kind of music that must be played from your soul.

How do you describe Jack Hadley sound and songbook? What characterize your music philosophy? 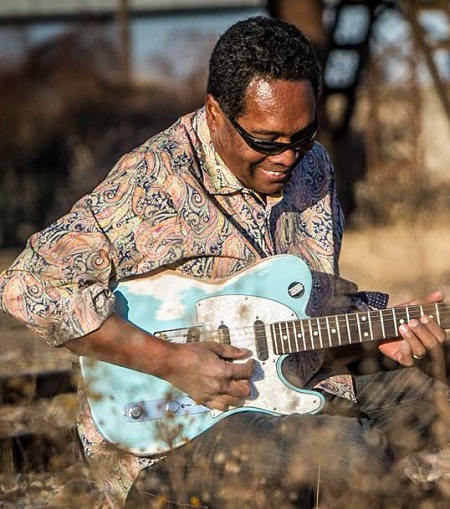 The “Jack Hadley sound” is a combination of many things: soulful blues, like Robert Cray, Otis Rush, B.B. King mixed with Hendrix and a touch of R&B. And I top it off with a little folk music. In addition to playing my own music, I’m a big fan of blues written by B.B. King, Albert Collins, Muddy Waters, Hendrix, Son House, Robert Johnson, Johnny Winter, Eric Bibb and so many others. I look to the original creators of this music and I make their music my own.

My philosophy is that most popular American music comes from the blues, and there are Black (African) roots everywhere in our music. America is a nation of immigrants and we all brought something to the musical table. But the blues ties all of it together.

In my opinion, most of the music that is played on commercial radio (whatever style you choose) comes from a different place now. The modern audience is more concerned with beats and the illusion of hipness. It doesn’t have an emotional pull, at least to me. I know there are exceptions and I’m making a general statement. People want to feel something, and music that comes out of the blues still grabs people. You can feel it when people start to move their bodies. It isn’t fake. Some of this comes from a generation gap, too. Young people don’t really understand the history of American music and they are disconnected from the roots. The blues will always give you something to hold onto. Many of us go through musical phases but somehow we return to the roots, the original music like blues, country and Rock n’ Roll.

I’ve met some really cool musicians, some famous and others not so well-known. I met Charlie Musselwhite about ten years ago. He was down-to-earth, a real person. I got to play with him at the Boulder Theater and he was very generous onstage, allowing everyone room to solo. Another great musician (and friend) is Bill Rich, bass player for Taj Mahal. Bill has also played with Hendrix, Buddy Miles, John McLaughlin and other superstars – but you would never know it. Both of these musicians have that human touch. They just do what they do and they don’t brag about it. I think that’s what I learned from both of them: just be yourself. I have also learned that I value the opinions of other musicians above anyone else. If they like what you’re doing, you must be doing something right. The best advice I’ve been given? Never give up. 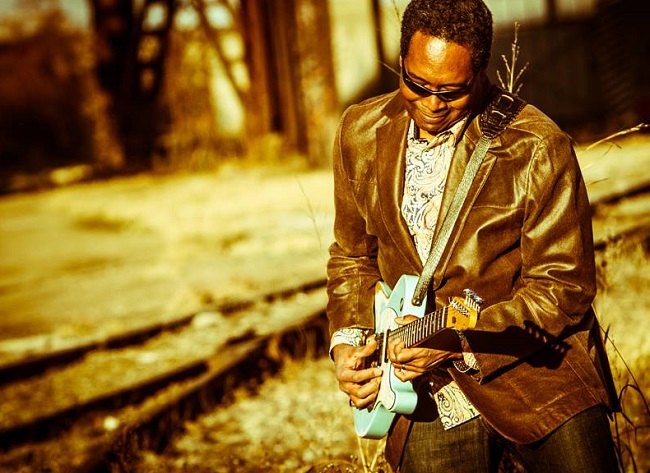 "I have learned that everyone has the blues, no matter where you come from. If you have a broken heart, lost a job, feeling bad…it’s all blues."

I had the opportunity to record at the original Wally Heider studio (now called Hyde Street Studios) in San Francisco a few years back. It’s the same studio that Neil Young, Bonnie Raitt, Santana, Herbie Hancock, Weather Report and many, many others have recorded in. I was overwhelmed just being there. A lot of the same equipment is still in place along with newer digital recording gear. I was touring with Otis Taylor in Brighton, England in 2005 or 2006. We were playing at a Brighton nightclub and blues legend Gary Moore walked in. I’ve played live on the BBC in London with Otis, and I played at the Rauma Blues Festival in Rauma, Finland in 2013 under my own name with the St. Louis Blues All-Stars. That same year I recorded my new CD at Casa Del Torretta in St. Louis with this same band, a studio also used by Chuck Berry. These are some of the memories that stand out for me.

I think what I miss nowadays is the feeling of discovery. I have seen and heard legendary musicians but I was not there to hear their music as it was first written. I finally heard the songs written by Robert Johnson as he played them, not an interpretation by Eric Clapton. Modern blues is very guitar-driven, and it wasn’t always so. The human voice is the original instrument, and I think the electric guitar has changed the blues forever – both good and bad.

I hope that people remember the blues as a living thing and keep playing it. I fear that it might disappear and become a museum piece, a kind of music that people refer to in the past tense. 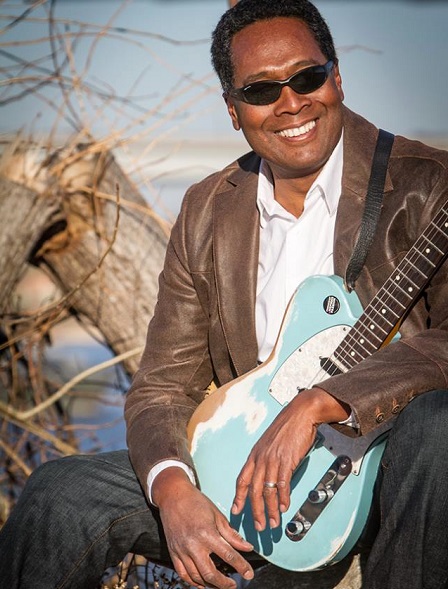 I would like to see the creation of music become more of a hands-on thing, where people play their own instruments and sing with their own voice. I would like more “real music” and less “studio magic.”

"I would like to go back hundreds of years to West Africa, before my ancestors came to this country."

What are the lines that connect the legacy of Blues with your multicultural fusion of origin?

Some of the lines that connect my legacy are my family. I have roots in the South because my father is a Black man from Louisiana. My mother was Filipino and I was born in the Philippines. I know there is a emotional connection there because of the history of that country being colonized by America in the early 20th century and the deep history of Black slavery here at home. My experience as an American has been steeped in that knowledge. I don’t dwell on the injustice, but I do recognize the history and the reality of where I come from.

I would like to go back hundreds of years to West Africa, before my ancestors came to this country. I’d like to spend a whole day with musicians and see and hear the kind of music they made. What kind of rhythms did they come up with, what instruments did they use? What dreams did they have and how did they create the music that eventually became the blues?

Make an account of the case of the blues in Colorado area. What has made you laugh lately and what touched (emotionally) you?

Colorado has some rabid blues fans. We are a western state, close to the middle of the country. There are quite a few bands that play blues-based music. I think most of the music I hear is blues-rock and that seems to be the way it is in much of the country. But we have some real blues here, too. Overall, I think there are good intentions and some excellent musicians. We have a number of major blues festivals every year: the Greeley Blues Jam, Blues From The Top, the Brighton Blues Blast and the Snowy Range Music Festival in nearby Wyoming, among others. I’m a board member of the Colorado Blues Society. Our society received the Keeping The Blues Alive award in 2013 from the Blues Foundation in Memphis, Tennessee for Blues Society of the Year. There are numerous blues jam sessions every week somewhere in most major cities and towns in our state.

What has made me laugh? Despite our attempts to attract young people to the blues, our audience continues to be filled with older people. There are some young musicians but the next generation might be on a different path. So it’s funny and sad when you look out at the sea of gray hair. I’m touched by the comments I hear from people who still dig the music, people who get it. If I can touch someone through music — that means more to me than all the money in the world, seriously.