"It (Blues) goes a lot deeper than the ears. On a personal level, it has allowed me a huge amount of expression, and somehow kept me from being hungry very often."

Michael Garrett: The Blues Is Alright

Guitarist Michael Garrett Wolancevich, born in Detroit MI, well known as member of Lil’ Ed & The Blues Imperials, shared the stage and recorder with great musicians. Mixing smoking slide guitar boogies and raw-boned Chicago shuffles with the deepest slow-burners, Lil' Ed and his blistering Blues Imperials - bassist James "Pookie" Young, guitarist Mike Garrett and drummer Kelly Littleton - deliver the blues, from gloriously riotous and rollicking to intensely emotional and moving. As much a family as a band, Lil' Ed, Pookie, Mike and Kelly have outlasted sports stars and presidents, musical fads and fashion trends. And together, they continue to make blues history with each and every performance and new recording. 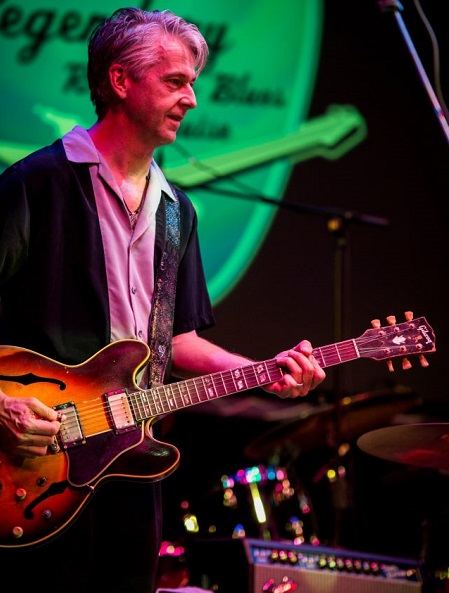 The band's wildly energetic and seriously soulful last CD “Jump Start” (2012) is jam-packed with Lil' Ed's incendiary slide playing and rough, passionate singing, as the ragged-but-right Blues Imperials cook like mad alongside him. The band-never having been in a recording studio before-treated the studio like a club, playing live to Iglauer, the engineer, and all the people on the other side of the control room glass. Twelve of those songs became the band's debut album, Roughhousin', released in September of 1986. But it wasn't until 1987, when guitarist Mike Garrett joined the band, and a year later, when Garrett recruited his Detroit hometown friend Kelly Littleton to play drums, that things really began to take off. Garrett's risk-taking rhythm guitar work and Littleton's conversational, old school drumming were the perfect complement to Lil' Ed's and Pookie's rambunctious playing. With their 1989 album Chicken, Gravy & Biscuits, doors opened and audiences poured in. Through relentless touring, the group crystallized, becoming tighter with each performance, more telepathic in their abilities to read each other's musical moves. Their spontaneous and unpredictable live show became legendary among blues fans worldwide. Spurred on by the band's rowdy performances, a legion of fanatical fans, proudly calling themselves "Ed Heads," eagerly spread the word. Quickly, Lil' Ed & The Blues Imperials went from playing local bars to clubs, concert stages and festivals coast to coast, giving national audiences their first taste of the band's propulsive boogie blues and wild stage show. Lil' Ed & The Blues Imperials released six Alligator albums between 1989 and 2008. The band won the prestigious Blues Music Award for Band Of The Year in both 2007 and 2009 and also took home the Best Live Band Award in the 2011 Living Blues Critics' Poll. Lil' Ed & The Blues Imperials continue bringing their seriously inspired and wildly fun Chicago blues to "Ed Heads" new and old, wherever they may be.

The Blues is the roots, and beginnings of all forms of American Music. This art form (African in origin) has become a universal language, that most everyone can relate to; on some level. It goes a lot deeper than the ears. On a personal level, it has allowed me a huge amount of expression, and somehow kept me from being hungry very often. I think it started when I was in the basement of our old house in Detroit. I found my mother’s old collection of 78 rpm records. She hadn’t listened to them since her young and wild days. On top of the stack was Louis Jordan’s “Choo Choo Ch’Boogie” I was hooked. 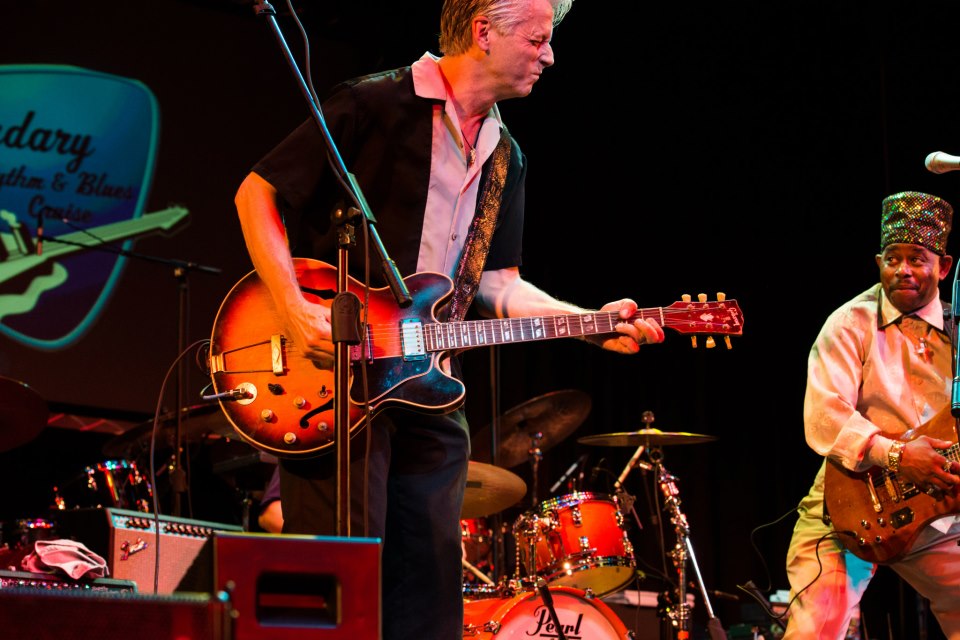 "The Great Slide Guitar players such as Hound Dog Taylor, Elmore James, Muddy Waters, and especially Lil Ed’s uncle, the late J.B. Hutto. This is the torch we carry with our music." (Michael Garrett & Lil'Ed Williams on stage /Photo by Laura Carbone)

How do you describe Michael Garrett sound and songbook? What characterize your music philosophy?

Growing up in Detroit, with a sister and a brother ten years senior to me; I had the privilege of hearing a lot of great styles of music. They were both really into it. Constantly bringing new records home. Everything from the Beatles, the Stones, Folk Music, Soul, and R and B. of course Motown artists like Marvin Gaye, Stevie Wonder and the Temptations. My Dads affinity for Polka radio shows, and country music. Music was always there, whether I liked it or not (and most times, I did) I learned to find something good in most types of Music. I had been dabbling at guitar a bit, and I liked to Rock! Hendrix, the Yardbirds, and Robin Trower. One day, my Brother brings home a record by some guy named Freddie King. “WOW” all of the lights came on for me. Led Zeppelin would never be the same again. He He!! I think all of this has come into my playing. Behind Lil' Ed, I try to do whatever it takes to keep the groove strong. Hide the holes that can sometimes hobble converting to pdf the Music. I listen to all the instruments in a song, not just the guitars. Try to keep my ears “wide open”. I try to listen to the music, perhaps as a producer would.

The one that immediately comes to mind: “Abe” Little Smokey Smothers. He was my first “road” gig. He taught me to stay humble, and keep my ears open. Playing with him around the little dives of Chicago, I managed to meet so many of the Older cats. They would come out to pay their respects to Smokey. Guys like Hubert Sumlin, Brewer Phillips, Smokey’s brother “Otis” Big Smokey Smothers, Johnny Winter, Willie “Big Eyes” Smith, and so many more. I had experiences with leading my own bands, but nothing like this. Suddenly I was playing shows with these guys. Somewhere around 1986, I had spent a couple of years around Chicago; meeting, and playing little gigs with whoever would have me. I’m hanging out at a northside club called B.L.U.E.S. on Halsted Street. I was invited to the stage by Jimmy Johnson to sit in with the band. He handed me his guitar, and stayed up there with me. Apparently, this impressed a member of the audience who knew Jimmy. He introduced himself to me as Bruce. He said Jimmy didn’t let just “anybody” play his guitar. He liked the way I did not overplay. Reaching into the B.L.U.E.S. cassette tape case (like he owned the place) he asked me what I was up to. He said he knew a band that needed a full time guitar player, if I could travel. As it turns out, this was Bruce Iglauer; president of Alligator Records. His advice: "practice playing in the key of D"! LOL 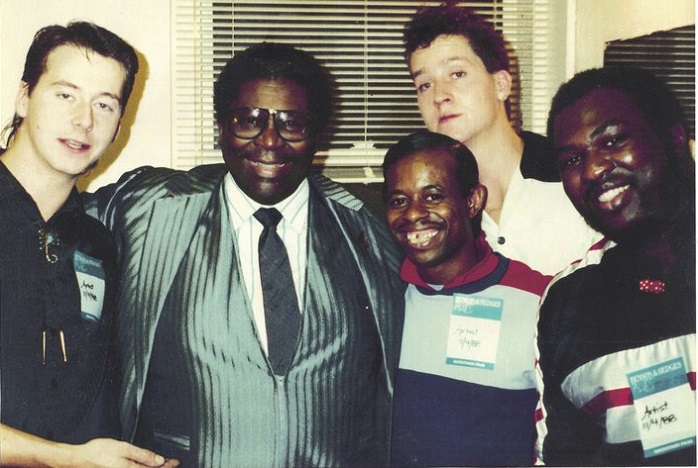 "The thing I miss most is the old school players. There are fewer and fewer of these guys standing as time goes on. The face of the music, like everything in life is constantly changing. Unavoidable, but sad to me." (BB King with Lil Ed & The Blues Imperials/Photo by Lisa Wolancevich)

Thirty plus years of doing this! This interview may turn into a book. There have been so many stellar moments, on a regular basis. I have to say, I’m so blessed and honored to be a part. One year, during Chicago Blues festival weekend; we’re playing at Buddy Guy’s downtown club. Halfway through our set Buddy (who had been playing at the festival) barges up on stage and says “I was down at Blues Fest playing with some friends, and I wanted to bring some of them back here with me” Up walks the one and only B.B. King. He didn’t play, or sing. He simply clasped his hands like a Karate Master and graciously bowed to each of us. The King, the Master, was acknowledging and saluting me?? I’ll never forget that!!!

What pop culture has done to Music in general bothers me. All of these shows, such as “American Idol”, “The Voice”, and their endless “Spin-offs”, (It seems like every country has at least a couple) have lessened, or made cheap, the sacrifices that all true artists have made in their pursuits. I know that it makes a contingent of “regular joes” happy, in a fantasy type of role. I get that. It’s very difficult for me to see personally, though. It would be nice if more record companies would become more active in new artist development, like the old days. All this concern about the bottom line. Can we find a hole in the bottom of the sea for the cars, with sound systems that make my dental work rattle from three or four cars behind? Oops, I guess that’s more than one thing. Sorry! 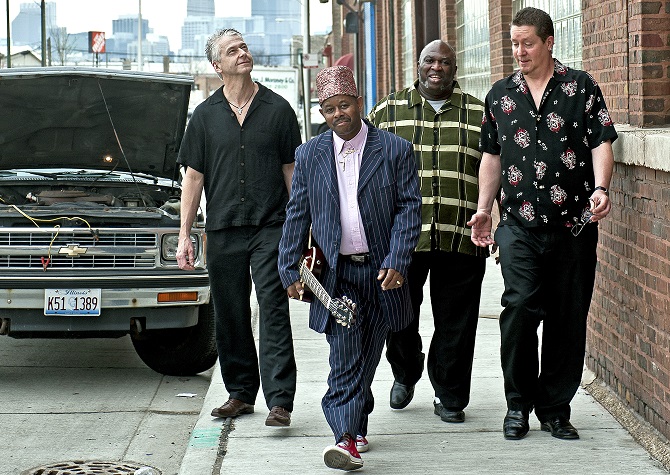 "The Blues is the roots, and beginnings of all forms of American Music. This art form (African in origin) has become a universal language, that most everyone can relate to; on some level." (Lil Ed & the Blues Imperials/Courtesy of Alligator Records/Photo by Paul Natkin)

Why did you think that the Windy City Blues continues to generate such a devoted following?

Because of the intensely deep emotion infused in such a basic musical rhythm. No frills. Accessible to anyone that has Heart and Soul. What person cannot relate to “I Just want to make Love to You”? “Damn Right, I’ve got the Blues” or simply wanting to go home like “Sweet Home Chicago”?

Not sure about laugh, but I just went through a massive heart attack, resulting in Quadruple By-pass surgery; and came really close to my demise on January Seventh of this year. As word spread, the outpouring of Love, Prayers, and Positive vibrations from friends, fans, and people that I didn’t think knew of my existence was simply overwhelming. I don’t usually cry easily, but I found out that I cried easily and often. So beautiful!

What are the lines that connect the legacy of 50s-60s Urban Blues with Lil’ Ed & The Blues Imperials?

The Great Slide Guitar players such as Hound Dog Taylor, Elmore James, Muddy Waters, and especially Lil' Ed’s uncle, the late J.B. Hutto. This is the torch we carry with our music. I had been listening, and absorbing these guys long before meeting Ed; in the mid 80’s. When I got together with him, this was natural for me. The thing I miss most is the old school players. There are fewer and fewer of these guys standing as time goes on. The face of the music, like everything in life is constantly changing. Unavoidable, but sad to me.

Let’s say Jerusalem 0 A.D. I want to meet that very famous Jewish carpenter, drink wine with him, feel his presence, and light; and drink it all in.