"America is different from Europe because schoolkids are singing songs like Johnny Be Good and Get Ready and country stuff so they have already more blues “roots” than we have I think."

Blues-rock power trio Rob Orlemans & Half Past Midnight has inspired enthusiasm and loyalty among fans around the world through their explosive live performances and exceptional musicianship. The band is a frequent headliner at Blues festivals throughout Europe, and has earned a growing audience for their live performances in the USA, Europe and at home in The Netherlands. 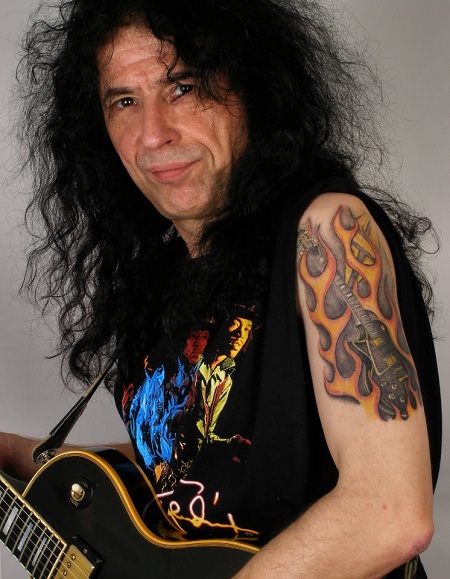 Their CD release "Live In Chicago" was recorded in the Blues capital of the world, and features several renown guest performers from Chicago's Blues community (Jacob Dawson, Tommy McCrackin). The CD has been enjoying extensive airplay on radio stations and blues programs throughout Europe and the USA. Blues magazines and web sites have been generous in their praise for "HPM: Live In Chicago". For years, Rob Orlemans toured with the legendary Curtis Knight, mentor of Jimi Hendrix, and they recorded several albums together.

Half Past Midnight’s appearances at major European blues festivals are eagerly anticipated by the group’s dedicated fans. The "face" of the band is Rob Orlemans, an innovative and entertaining southpaw guitarist, steeped in guitar lore who has a dynamic, exciting guitar style and sound. In recent years, Rob has led the band to a remarkable international breakthrough. Half Past Midnight's incredible rhythm section, comprised of super drummer Ernst van Ee and Piet Tromp, a great player on the bass, delivers a powerful yet fluid foundation for Rob's guitar pyrotechnics. The albums LIVE IN CHICAGO, LIBERTYVILLE, INTO THE SPIRIT and the DVD OPEN THE CAGE all have received fantastic reviews. The new album “HIGHWAY OF LOVE” just released.

What I’ve have learned the most is that in blues music you don’t need a lot of words or chords to explain what you want to bring or say to the people (listeners).

For me is blues from Muddy till AC/DC. People who are honest in what they play I think. Blues is not a trend or hype. It is always there and has his followers/listeners.

How do you describe Rob Orlemans sound and progress, what characterize Half Past Midnight philosophy?

We play what we like and you can call it blues or blues based rock or whatever. We don’t play for the fame. We love to play but we are very pleased that we have real fans and that our cd’s/dvd has great reviews. On stage we go for it. I can tell you. 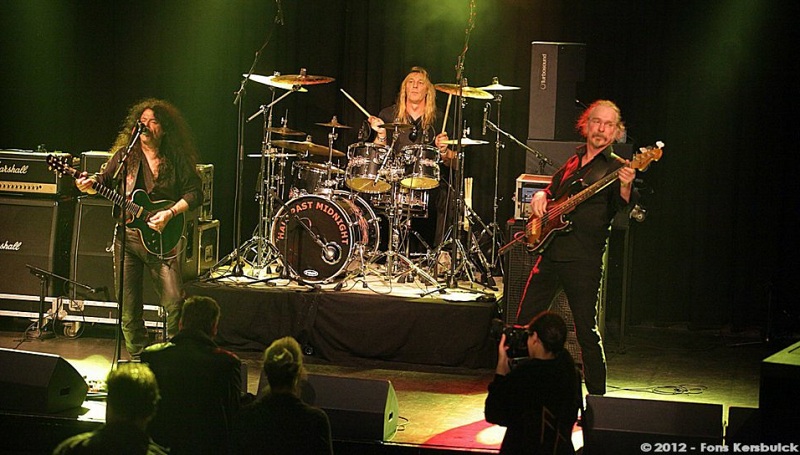 Tell me about the beginning of Half Past Midnight. How did you choose the name and where did it start?

I want to start a blues rock band and used the name of a cult movie I had made some music for. I became more professional when Curtis Knight came in the band. Played with him from 1994 till 1999 when he died. The band was called Curtis Knight & Half Past midnight. We recorded 2 albums. Sometimes we played also concerts without him and we recorded in that period also an album without him.

In 2002 I started to play under my own name Rob Orlemans & Half Past Midnight with a new bass player (Piet Tromp) and we went of with “Live In Chicago”. Later (early 2007) we got a new drummer (Ernst van Ee) because our drummer (Yuri Yeryomin) had back and arm problems. I still play with Ernst and Piet. Fantastic musicians!

A blast was the day that Curtis came in the band because I’m a Hendrix fan and collector. That was strange in the beginning hahaha but we had a great time and I learned a lot from him.

The band is still in progress, I hope the worst moment won’t come hahaha. Do you remember anything funny from the recording and show time in USA?

Yes, a lot because I did it several times. Great to play and record in USA. Our albums are also released there. Have also a lot of videos from the US. A real blast! A funny thing was when we play in a club with lots of really well known Chicago blues musicians in the audience and I was a little scared that people could think that it is to heavy  blues rock stuff but my companes said to me. “Be yourself and crank that guitar up”. I did…what a blast. The audience loved it hahaha

Best Jams were with Sam Mitchell and Jacob Dawson I think but did also great jams with other fantastic musicians. And on our new album “Highway Of Love” my friend Julian Sas plays 2 songs with us.

Meetings with people who are professionally players with a real musical history like Alvin Lee or Jacob Dawson for example. They hit the right notes and have nice stories to tell…

I saw a photo with Peter Green, tell me a few things about your meeting with him? 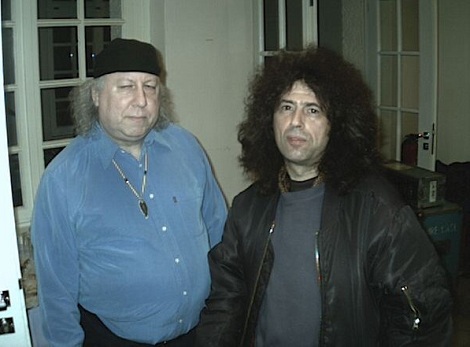 I did a show with Canned Heat and the promoter just invited me to come as a visitor to a double bill show with Canned Heat and Peter Green Splinter Group the next day in Germany on a  Horse Race Track. He was the owner there. So I met Peter Green there and could check his guitars. And talked a little with him. A very relaxed and nice guy he seems to me. Had a great diner there too haha

Are there any memories from Curtis Knight which you’d like to share with us? Which memory makes you smile?

Lots of stories to tell about Curtis Knight. There a lots in the book “Curtis Knight: Living In The Shadow of Jimi Hendrix” by Cathy Knight-McDonnel.

Curtis was very ill and had already said goodbye to us because he was going to die and was laying on his bed wit a morphine pump… A festival promoter from Germany asked me if it was possible that he could play only one more time a song with us in Germany. Didn’t matter what is the costs are and they would pick him up in a special van or whatever he needed. They had good memories about our shows with Curtis in Germany and want to honour him. So they said: Please Rob, ask him… So I did…

Do you know what the first thing was that Curtis said to me?

How much money do I get? And I don’t need a van. I come with my own car and my wife. It sounds really strange but I had to laugh.

So he came to Germany and after we had played about 30 minutes he came on stage without a wheelchair. Unbelievable! He stayed more than 90 minutes on the stage instead of 20 minutes and lived up. We played loud an wild boogie stuff and the audience went crazy. What a man, so sick and doing something like that…That was Curtis Knight!!

The real bluesmen like Willy Dixon and Muddy Waters, Sonny Terry & Brownie McGhee, Big Bill Broonzy...etc… Wrote a song about that on our new album and the tune is called “That’s The Way To Boogie”. Guys like Alvin Lee, Mick Taylor, Jeff Beck, Peter Green,Page, Marriott and lots of British guitar players learned their licks and songs from them and made new good blues based music. 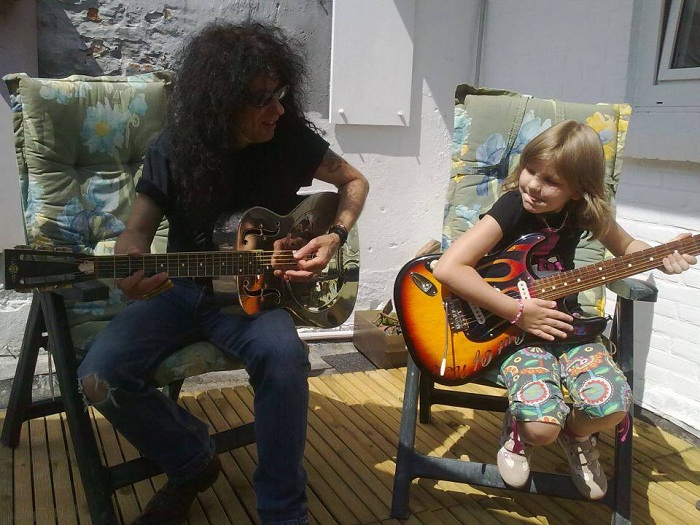 Like I already said: It will always be there. It’s not trendy based like a lot of new pop music …Blues based music will stay. I’m sure.  The only fear I have that is that radio jockeys could think that it is music for an older generation. Nonsense! Okay, you can see sometime some older guys playing as a hobby with a “blues hat” on and a music stand with the lyrics and chords for their nose... Some people think that that is blues music. But it is not!! There are great performers with good interaction with the audience and that is what we have to see more on National TV…

Guys like Jack White (even if you don’t like it) did a good job for the blues.

What are the lines that connect the legacy of Blues with Soul and continue to Rock and music?

Not really rules I think but you have to know something about the roots.

How did they play, what did they sing and why. If you know that you can sing and play what you want without being a copycat. I think that you hit the notes better and your instrument can walk hand in hand with the lyrics and give the right expression.

A lot of rock and hard rock bands I like also because they have that feeling too. Listen to AC/DC for an example. Angus plays blues based riffs. Great!

I try to have good contact with the people and give them together with Piet and Ernst a really good time. Just like we have. We are what we play…haha Make an account of the case of the blues in The Netherlands. Which is the most interesting period in local scene?

Pffff, what a difficult question. The most interesting period is maybe for lots of people the outdoor festivals in spring and summer. But in the clubs you can see lots of good bands too during the whole year. We have lots of venues to play in Holland.

From the musical point of view what are the differences between: a European and American Blues musician?

America is different from Europe because schoolkids are singing songs like “Johnny Be Good” and “Get Ready” and country stuff so they have already more blues “roots” than we have I think. I have seen that myself. It’s a big country with great players but I can tell you that we have great players to…haha. Nice subject to talk about on a birthday party haha

Do you think that your music in new album is as it started out or are you pointing in a new direction?

Everytime you try to develope yourself but not really change the music. You try to write better songs, better licks, better vocals…something like that

To see Jimi Hendrix Live The LA Forum or Winterland!!!!!!!! And if that’s not possible

I like to go back to the recording session with John Lee Hooker with Canned Heat and gonna asked if I may sit in…..

Rob Orlemans & Half Past Midnight - Home 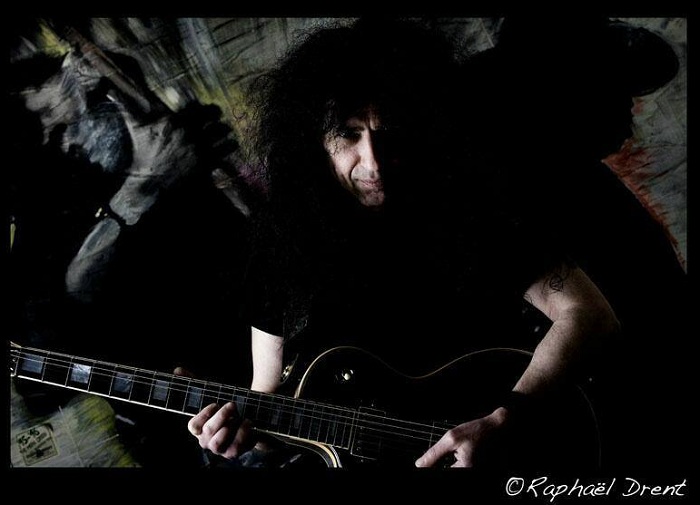