"Blues Women are a special breed. They are talented, beautiful, soulful, passionate, interesting, intelligent and hard-working individuals doing what they love to do. People see that in them. People like integrity."

Lisa Eismen is a writer, director, filmmaker and musician who "has the blues in her soul" thanks to having grown up surrounded by blues musicians in Chicago. Lisa as filmmaker and writer dedicated to developing, directing and producing exceptional drama, theatre, documentaries and music videos from concept through to completion. Her most recent documentary GAME CHANGER which she directed and co-produced with Australian company, Cool White Bunnie Productions, was selected for festivals including the Australian Indie Gems Film Festival (2014) and the Dungog Film Festival (2014). She has also directed the music videos COCOON for Runcible Spoon and LAZY BONES for RogerZand as well as a number of short films. Lisa in 2011, formed the U N Me Films, a small independent company that produces quality drama, documentaries, animation, music videos, web-series, corporate videos and theatre for a worldwide audience. Lisa and U N Me Films continue to work with experienced and talented writers, editors, cinematographers, casting agents, cast and crew. “U N Me Films” continues to diversify and establish solid relationships. Her upcoming documentary film called Women in Blues, directed by Lisa Eismen and shot by award-winning cinematographer Pieter De Vries. The film celebrates women who sing or play the blues and explores the struggles that these artists have experienced as women in the world of blues. Filmed interviews with singers such as Grana Louise, Peaches Staten, Deitra Farr, Joanna Connor, Liz Mandeville, Shirley Johnson, Claudette Miller, Laretha Weathersby and Holle Thee Maxwell.

That’s a great question and one that I have to dig a little deep to answer. Blues to me is a chord that hits me probably like no other genre of music. It’s my dad playing his piano. It’s the blues clubs I’d go to in Chicago. It’s a sound of lament, soul and hope. It’s the sound of people expressing themselves. I don’t think I can tell you what I learn about myself from the blues other than it’s simply a genre of music I love and respect more and more. I’ve learnt how deeply I am connected to this music.

How started the thought of “Women in Blues”? Are there any memories from which you’d like to share with us?

I started this journey by literally NOT going on a journey I was supposed to go on. I was heading overseas, back to the USA where I was born to visit my family and then was going to go on a road trip with my sisters. Well, they all pulled out on me and I thought, well, I’m still going to go but instead of heading West, which I’ve been to many times, I think I’ll head South and check out the music scene. And I’ll film it!  And I’ll film all the women I see playing the blues. And that’s how it all started.

As for my past, I lived in a very small 3 bedroom house with my two parents and 5 older sisters. Space was tight but still, in the centre of the living room stood my dad’s baby grand piano and he banged out the blues. My grandmother would come over with her portable organ and my uncle would play the accordion and they would jam playing blues. It was a house filled with music. That has never left me. "I think that women are challenged constantly in the man’s world of blues music. Ask any of the women what the ratio is at any blues festival at any time and it’s as bleak as 100% - 90% men to 0%-10% female." (Lisa & Peaches Staten / Photo by Piet de Vries)

Why did you think that the Blueswomen continues to generate such a devoted following?

Blues Women are a special breed. They are talented, beautiful, soulful, passionate, interesting, intelligent and hard-working individuals doing what they love to do. People see that in them. People like integrity.

I just love those old recordings. My hopes for the blues of the future are that it never dies, and I don’t think it will. And I guess that’s my biggest fear, that there is a chance it could die if there aren’t new people out there singing the blues.

I think that women are challenged constantly in the man’s world of blues music. Ask any of the women what the ratio is at any blues festival at any time and it’s as bleak as 100% - 90% men to 0%-10% female. I think women have to be a little smarter than the men when it comes to getting the gigs.  They have to know their audience and target it.

The current status of women in Blues is constantly changing. I guess it depends who you are interviewing. Over-all, it’s just tougher for a woman. They have to deal with things that men don’t. Sexuality, looks, children and being the odd one out are tough and huge issues to constantly battle. Watch any woman on stage with her band, mostly all male, although things are gradually changing. She has to commit, control, respect and encourage the band. There does seem to be a massive rash of new guitar playing blues women out there, which a big change from the days of Bessie Smith. 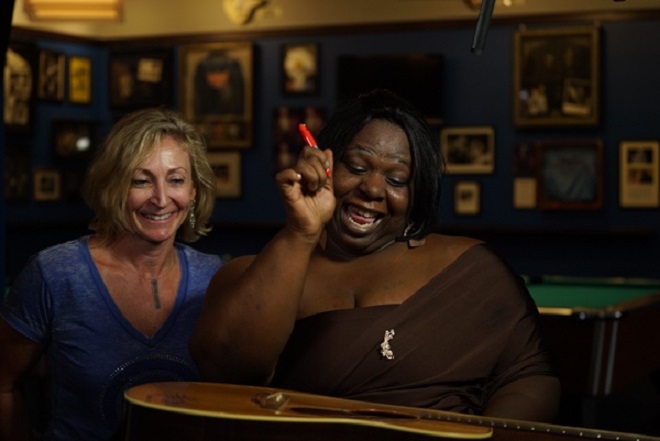 "Blues to me is a chord that hits me probably like no other genre of music." (Lisa & Mz Peachez Williams / Photo by Piet de Vries)

That people don’t forget the roots of music, or that those who don’t know what the roots are; learn them.

What are the lines that connect the legacy of Ma Rainey and Memphis Minnie with the new generation?

Simply put, the love of singing and playing the blues.

What has made you laugh lately and what touched (emotionally) you from the stories about the women in Blues?

Oh wow, I have so many stories. I’ve learned an awful lot about these women. They’ve opened up to me; probably the most touching for me is the story of Claudette Miller’s daughter dying 2 years ago. I have 3 children of my own and her story made me cry. No one should have to lose a child before a parent, but it happens all the time doesn’t it? Claudette’s daughter’s death is still inconclusive as her body was found in her apartment. The boyfriend is to blame according to Claudette and her family and they had to dig deep to carry on. Claudette still rings the police department to see if they have found anything new. She feels that the case is closed in their books.

All the ladies make me laugh all the time, but my highlight (and it’s rather self-indulgent) is when I was filming Peaches Staten at Blue Chicago. It was the last night of an 8 solid-day-and-night shoot with not much sleep. I packed the gear away and ordered a Jack Daniels and Coke, and I started dancing with my sister and my two dear friends and helpers. At the end of the night Peaches asked the crowd if anyone wanted to play her Frattoir and I jumped up and strapped the thing over my shoulder and did not let up. I had an absolute blast playing with them. 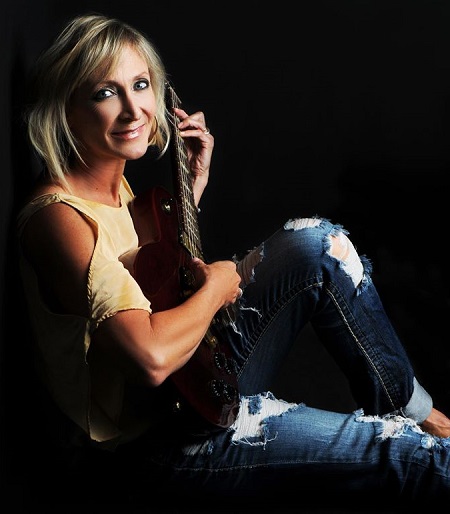 Back to our old living room in my old suburb of Chicago and I’d sit down next to my dad on his bench and I’d watch, I’d listen and I would learn how to bang on those keys like he did. I would lean into him and just be.

"My hopes for the blues of the future are that it never dies, and I don’t think it will."

How you would spend a day with Big Mama Thornton? What would you like to ask Koko Taylor?

I would jam with Big Mama Thornton as best as I could. We’d sing and swap instruments. We’d share a meal or two and I’d ask her to sing some gospel songs for me.

I would ask Koko Taylor what it’s like to be a blues woman in a man’s world.