Greek Blues Scene: Interview with Lazytrains, a youthful band where disseminates the axioms of music

"We are the Music! People don’t act the same but they still people. Music may look a little different but it still the same."

Lazytrains: All Aboard The Rhythm n' Blues

The Lazytrains is a new Rhythm n' Blues band from Athens, Greece. Laizytrains were formed about 3 years ago for one simple purpose: to have a real jolly time. And so far the band has achieved this. Blues, Garage, Rockabilly, Jazz, and Punk, Lazytrains like them all and like a barman experimenting in new cocktails, their mix them, knowing however that the end result shall be unique. 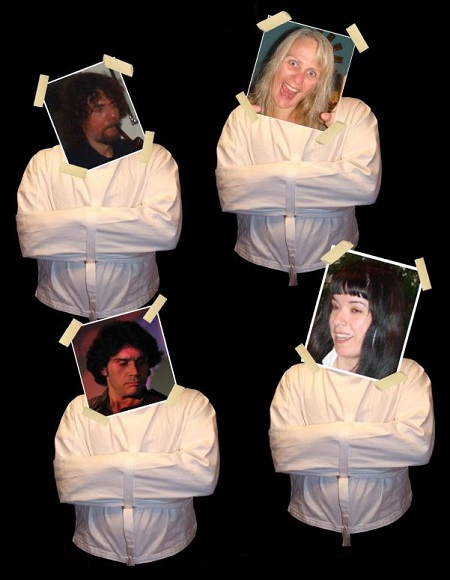 Lazytrains have also appeared at the "Technopolis" festival, celebrating the 25th anniversary of "9,84 FM" radio station. This period, among other things, the band works in the studio their kind of blues.

The Lazytrains are: Maria Ioannidou on vocals, Dimitris Papalakis on guitar, Eleni Fiseki on drums and Dimitris Melanis on bass.

Dimitris: The first time I played the blues was when I was at highschool, I must have been 16 years old, and I played a harmonica; then I switched to guitar, acoustic. I had made friends with some never-do-well kids from the last class of the lyceum, always there at the same class for the third or the fourth time. They taught me the old masters, together with John Mayall, and how to play the fuckin' guitar- I eventually bought me an electric one (and with stolen money) tryin' to play like Eric Clapton of the' Beano' album of '65.

Eleni: Ok Ι will be honest; I cannot remember, which means it must have been quite a long time ago.

Dimitris M: I play music since I was a kid. I started with rock. Blues are the origins of rock so the transition came naturally but still for me are the same.

What characterize Lazytrains philosophy and sound? Why did you choose that name? 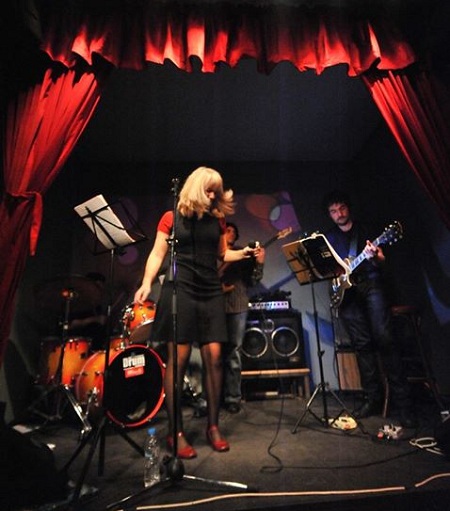 Dimitris: The Lazytrains philosophy is spontaneity first and last, with some tidying up at the midle. The sound is all things Rhythm 'n' Blues and the name clicked because of the train, powerful but a lazy one, take-ing its time every step in its own way no matter what.

Maria: It's very difficult to remember and pick out just one. Every moment is unique and memorable, every jam and every show put your music performance puzzle together, gives new, fresh air to breathe in, and new suspense...One funny thing that happened and always brings a smile on my face is when after our guitarist's solo I was about to get the mike off its tripod/base (?), the cable got off the mike and I just stood still there, holding the mike....

Dimitris: As for gigs, my favorite was the festival at the Tritsis Park, though we managed to have fun on all of them, a laugh with everyone, not a smile

Eleni: Best live ever was at "Granazi" bar in Peristeri. The people there are simple awesome.

Dimitris M: I treasure every jam and gig the same way.

Maria: The blues are quite familiar to the Greeks. It's a kind of folk music, rather simple in its style and nature, which-though-touches upon the Greek soul in pretty much the same way "rebetiko" music does. There are many who argue that the blues and rebetiko are really on the same line. That's why we like the blues so much. It's because they reminds us of our cultural past and our music roots.

Dimitris: Well, for the blues rock in Greece, I suppose Socrates where the first and many followed them but without ever achieving their status, I don’t think there's a blues rock scene in Greece, worth the name at least. I also don’t think the Greeks love the blues, neither music in general; they're just a bunch of uncivilized megalomaniacs, pretending to love and own Parthenon etc. etc.

Eleni: Are they? Are you sure? Because even now l know many people that think blues means dancing with a girl cheeck to cheeck at parties …really. We live in "Bouzouki land".

Dimitris M: I think I can say it’s because we grow up listening to rock music. 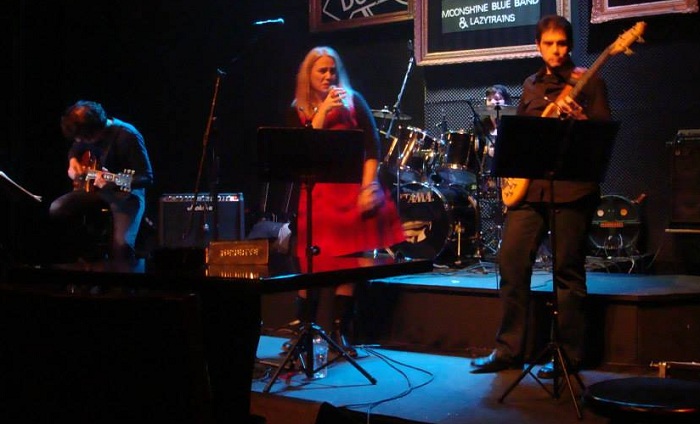 "Well, for the blues rock in Greece, I suppose Socrates where the first and many followed them but without ever achieving their status, I don’t think there's a blues rock scene in Greece, worth the name at least."

What do you miss most nowadays from the blues rock of past? How difficult is to exists and maintain a blues band in Greece?

Maria: Blues depicted musically a way of life that doesn't exist anymore. So, I really reminisce the authenticity and the immediate sentiment that springs out when listening to an old recording. What we shouldn't do, though, is simply copy the past but, rather, express the blues in our own personal style. In Greece, music has been replaced with music "show", you don't go to "listen to" the music and singers but "see" the latter. Still, if you are dedicated to what you love, then you try to overcome the hurdles and keep on trying to "listen".

Dimitris: What I miss about the blues rock of the past, is the sound and the right amount of technique thrown into the feeling, not too much technique that is-down with the plan I say! Maintaining a blues band in Greece, means simply that you're not starving with being too obstinate to quit, it's funny.

Eleni: I haven't actually lived the blues rock scene of the past, so it's rather difficult to trace something that' I'd miss from those days. Being on the "outside" we see it all in a romantic and beautiful way and we are filled with some sense of nostalgia even if this last bit is a product of our imagination. If we were actually there, maybe things would have been different. Regarding the second part of the question, well, living in Greece in these times with a recession worse than the one in America in 1927, it is a real struggle to just survive, never mind the rest.

Dimitris M: I miss bands of the past. There is not a new Frank Zappa around. As for difficulties everything is difficult in Greece. 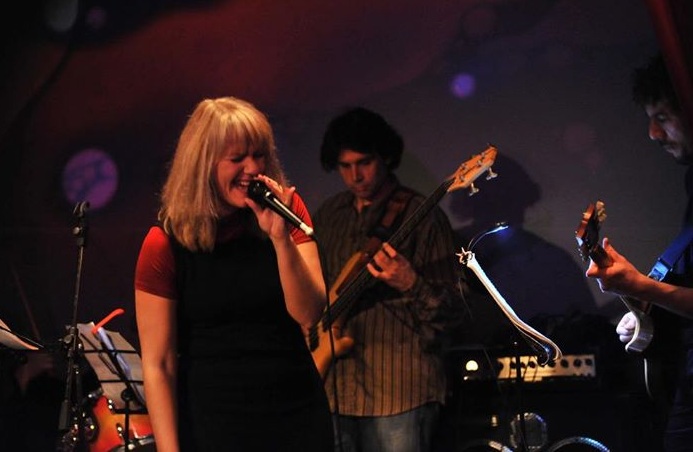 "The blues are quite familiar to the Greeks. It's a kind of folk music, rather simple in its style and nature, which-though-touches upon the Greek soul in pretty much the same way "rebetiko" music does."

What are the lines that connect the legacy of blues with soul and continue to rockabilly and punk music?

Maria: When I sing or listen to a piece the first thing I ask myself is not whether this a blues piece or a punk one etc. I just ask myself "do I like it?" So, I focus on the particular piece, not on the kind of music it belongs to. So I just make my own music "soup" and the lines connecting different kinds of music fade away and it is aesthetics and emotion that replace them...

Dimitris M: We are the Music! People don’t act the same but they still people. Music may look a little different but it still the same.

What do you learn about yourself from the blues and what does to be a blues woman in a "man world" as James brown says?

Maria: Every time he sings and you learn a new song, it is an introspection, a journey that leads you to the unknown depths of yourself, which are reflected on your own song interpretation (or execution???). As for "what a woman is doing in a men's world", it's always very heart-warming and pleasant to be surrounded by men and share the same passion for music. What more can a woman wish for?

Eleni: I never felt that a live in a «man world»... Maybe is has to do with the fact that we live in 2014 or maybe I live in my own world (but its okay they know me here). "Are they? Are you sure? Because even now l know many people that think blues means dancing with a girl cheeck to cheeck at parties …really. We live in Bouzouki land."

What mistakes in local “blues business” would you wish to correct? What are your hopes and fears for the future?

Maria: I think it lacks experimenting, maybe because it stays within the limits and limitations of a particular kind of blues music. So, I hope that we can blow our own wind on the Greek blues stage, combining blues with jazz, rock punk funk shades and notes. I also hope that we will manage to get in touch with other Greek bands to try to form the foundations of a more organized blues stage in the country.

Dimitris: There is no local business worth speaking of as I’ve already said, people don't go to concerts, groups don’t get paid, what more could anyone wish, no hopes nor fears for the future (the Pistols got that right).

Eleni: Haven't got a clue, really. Personally I haven't indulged into the “blues business” subject; I cannot tell either whether it works or how it is going. I am pretty aware of bands playing around for 20 plus years and they undoubtfully do it because they must be rather "nuts", they do like doing this and I admire them for that and for their music. We have some really great blues bands here!!! This is it more or less.... As for hopes....well, that we'll still be active in 20 years and you'll interview us again!!!

Maria: I'd like to share the stage with musicians that are not with us anymore, and I don't have the opportunity to listen to them playing only to relish in their simplicity, the frankness and the respect they had for what they were doing.

Dimitris: As for the time machine, there's no need of it: a ticket for New Orleans anytime anyday would do for me; I don’t know about return, I suppose not.

Eleni: If I had this opportunity, I'd go to Kastelorizo on the day that Greek ex-Prime Minister George Papandreou announced the coming of the International Monetary Fund. I'd throw him a bomb and I’d be really pleased about it...Oh, yes!

Dimitris M: I would love to see Frank Zappa live or to be in Woodstock.