"Searching the lyrics of the blues songs, you will realize that they talk about the same basic problems of living we have today and has to do with poverty, human rights, depression, love and hate, money, gambling, drugs etc."

Born and raised in Zakynthos island, Greece in 1985, Gutter Case didn' t have a lot of interesting things to do rather than scratching his father's old guitar who taught Gutter all he knew...three chords...although fairly enough for the Blues! After gigging with bands in high-school years in local bars as a vocalist, bassist, guitarist or harmonica player he moves to Athens for studies with no great success. So he tries to find his own way through music but after a couple of years playing in small bars in Athens, he realizes that he gets no satisfaction from singing the same old stuff for money. While he passes his time searching music videos on YouTube and drinking beers he starts discovering the Blues. 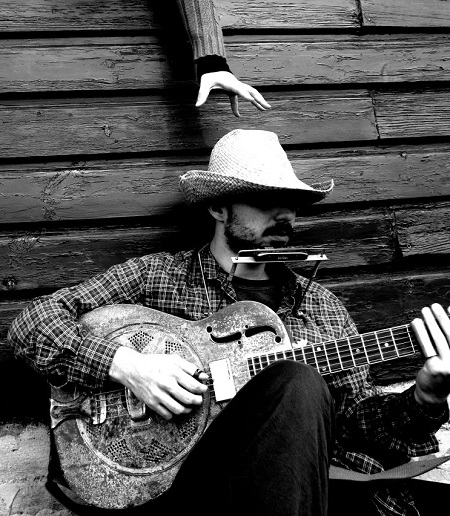 Beginning with Rory Gallagher's acoustic Country Blues covers and descending to the original recordings of 30's Delta and Country Blues, finds himself fascinated with the raw sound, power and history of root blues. As a self-taught musician he gives himself a hard-time listening and working to decipher the styles of the artists of that era. Drawing from the well of the Blues he continued to discover later blues artists and styles from 40's, 50's and 60's. Always listening and searching with passion, he follows the evolution of the Blues and other genres affected by the Blues from Boogie-Rockabilly till the modern fuzzy Blues. He slowly forms his multi-style of playing by fingerpicking and sliding the guitar.

After busking in the streets of Athens he gets influenced by other street performers and hooks on the idea of one man blues band. After a long-drawn-out argument with the members of the band (!) they decide to name the band "Gutter Case" OneManBluesBand. "Gutter" because he was usually busking on the "dirty" side of the street and "Case" from the peculiar sound of his guitar case used as a bass drum! Now, while making his own stuff, he gives live performances making covers of 30's Delta & Country Blues, Boogie, Rockabilly, Chicago Blues and modern bluezzy tunes in his own unique one-man-band way.

Well, as the blues were born by African slaves and was the music that expressed in a fully emotional way poverty, misery, love, hate and hard-times generally but also fun and joy of the depressed Afro-Americans from 1900 and later, blues deliver to me a powerful passion for life. That passion through lyrics, melodies and distinctive expression styles full of feelings, pushes you to fight against everything that depresses you and shows you a way to truck your blues away and have fun even it's a hard time! "Blues music continuous to generate a devoted following all over the world, even in countries you could not imagine, and this has to do with the strong emotions that blues music generates to people." (Photo by Alexander Margaris)

How do you describe Gutter Case sound and progress, what characterize One-Man Band philosophy?

Hmm...my sound...look in my performances I play in different styles, in my personal taste and approach, through the evolution of the blues from 1920 till now. So I am swapping between true acoustic vintage sound and fuzzy-electric modern sound, using harmonicas, kazoo, mouth-trumpet imitation, acoustic guitar in fingerpicking ragtime style, resonator slide guitar in open tunings electric guitar and of course my hand-customized simple drum set with foot pedals, as I use my feet stomping my guitar case as a bass-drum, hi-hat cymbals and tambourine. Now for my sound on my personal stuff, I'm still experimenting!!! I think that the main thing that characterizes One-man band philosophy, if there is one, is the raw emotional sound while you use the basic elements of a three to four-piece band. Less is more you know...feeling is what matters. If you listen to holler-blues, I'm sure you will understand what I mean. Well the other thing about one-man band far from the sound is the fact that you can play anywhere like a full band and the freedom to transform anything you play in real-time!

Which was the best and worst moment from your experiences on the streets with the blues?

I have a lot of good moments on the streets, especially from people who stay to listen even for a whole hour and then they ask me information about what kinda music I play...or offer me beer...a proof that blues are truly emotional! But I think the best funny experience is when I was playing a ragtime 30's tune, an American tourist from New York stopped and asked me if I'm American. When I told him that I'm Greek he told me "Haha ha...well you' re a Greek singing the American folk blues...guess what...I'm an American singing Greek Rebetiko and playing bouzouki!!!" Well, the worst thing is always the cops!

What are some of the most memorable gigs and jam you've had? Which memory makes you smile? 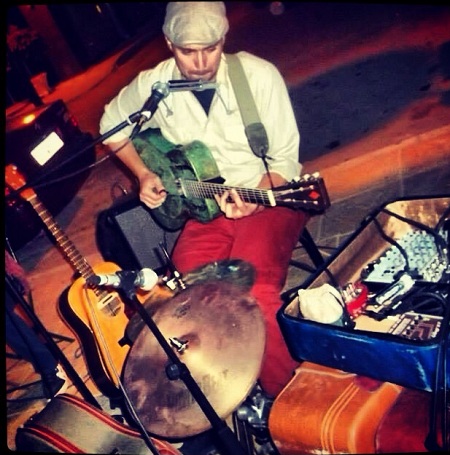 The most memorable gig is the one in a small old village's inn in Zakynthos Island where the audience was mostly middle-aged. Everything was going well as usual but when I started playing Boogie things they got up and began to dance like crazy! I remember I was playing each dancing song for about 15 minutes and they didn't get tired! It was an excellent funny night, one of that you don't expect if you usually give performances in bars! The whole set list lasted 3,5 hours without break and my feet were on fire, really memorable too, as I can remember...because I drunk a lot of tsipouro (strong distilled spirit) that night!

Maybe I miss the lack of high-end sound technology. This might sound strange...but when I listen to modern blues recordings with excellent mixed digital sound, they sound to me "sterilized". I don't want to blame sound technology, it's superb sometimes, and by the way, to be honest, it matters the way you use it!  Well, I don't have any hopes or fears about the blues, they keep walking (!) and they have to be totally free (music generally has to be free of any rules) keeping the basic elements that gave birth to it, soul and feeling, otherwise it turns to be spiritless music for easy fast mass consumption.

What are the lines that connect the legacy of acoustic folk Blues with the modern electric urban sound?

It's just evolution...and I believe all these different styles of playing the blues in 30's were born because these blues-men were keeping experimenting with techniques and sound using everything they had. I mean if Charlie Patton was given an electric guitar and amplifier he would surely be curious for the new possibilities of expression! It's all about taste and soul! 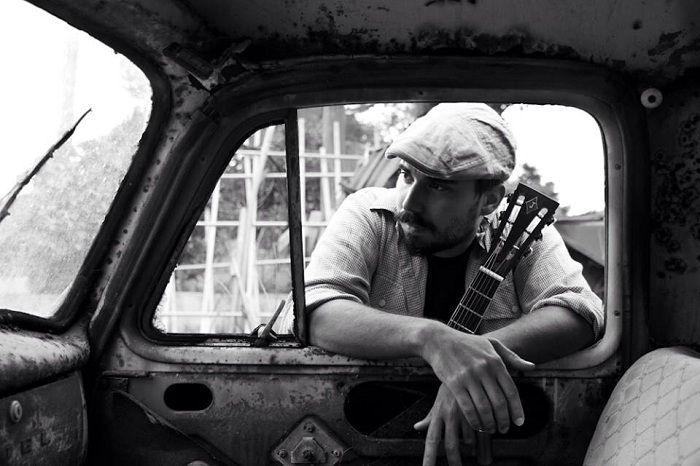 "I think that the main thing that characterizes One-man band philosophy, if there is one, is the raw emotional sound while you use the basic elements of a three to four-piece band. Less is more you know...feeling is what matters." (Photo by Alexander Margaris)

Why did you think that the Blues music continues to generate such a devoted following in Greece?

It's a fact, Blues music continuous to generate a devoted following all over the world, even in countries you could not imagine, and this has to do with the strong emotions that blues music generates to people. Especially in Greece there is surely a connection with rebetiko but also I believe that Greeks get fascinated with soulful music genres in general.

Why are Greeks so enamored with the blues? What mistakes in local blues scene would you wish to correct?

Well, about the USA, I've never been there so I don't know, but outside Athens it is often easier because most people are really curious to watch a performance of an one-man blues band even if they haven't listen to Blues music for a lifetime!

Do the media help and who are the people were working for the case of blues in Greece? 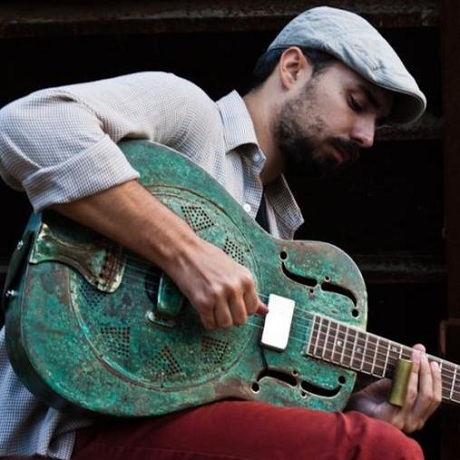 I don't get informed by the media like TV. radio e.c.t. so I don't have a clear point of view for this matter. But surely there is a brilliant effort from the Greek Blues society in the internet through forums.

"All over the world there are musicians fascinated with the blues!"

Do you know why harmonica, slide and resonator guitar is connected to the blues? What are the secrets of?

They were cheap, portable and easy to find for the early blues-men, I suppose! Secrets? There are no secrets...the techniques and tricks are endless and available on YouTube!!! Soul and feeling are far away more important!

Yes I surely do! Searching the lyrics of the blues songs, you will realize that they talk about the same basic problems of living we have today and has to do with poverty, human rights, depression, love and hate, money, gambling, drugs etc.

I don't want to go anywhere in the past even for one single day! I live here, I live now. Besides, the world is going back from its own (!) in a good way rediscovering the truth encrypted in the "old-way" and in a bad way referring to human rights, worker's rights, racism, depression and more. 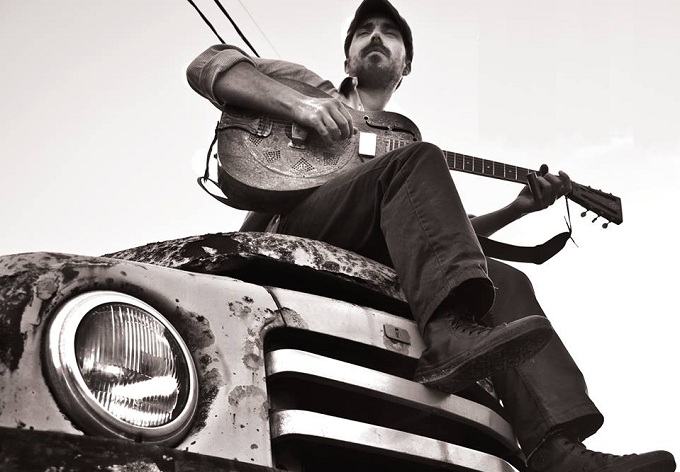