"Blues like other music genres is a way to express your inner feelings BUT even more, you know…here we're talking about the power of simplicity."

The band begins his musical journey in the autumn of 2007. Original composition, John Salonikidis guitar - vocals, lots of drums and John Theodore Arabatzis on electric bass. The sound of "Blue Flames" is blues, rock up to hard rock, and there is still an influence from the previous figure, the GangBand. Early 2008 to form another member enters the world in Karagiannidis keys and soon become some Live, in cities such as Xanthi, Kavala and Serres. The songs are all covers of artists such as Stevie Ray Vaughan, Hendrix, Rory Gallagher, Gary Moore and Doors. Spring 2008 comes in shape Vasilis Kariotes in harmonica. 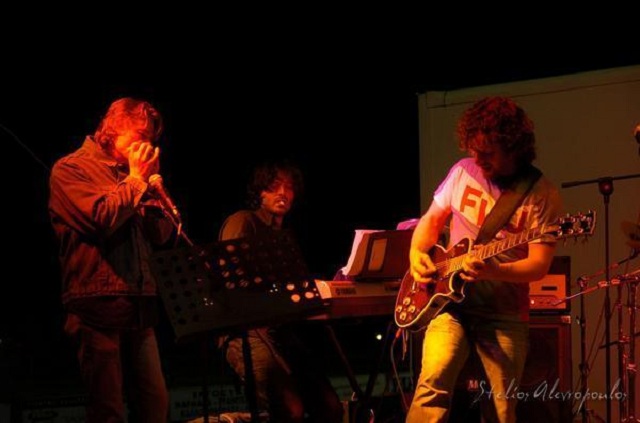 The first song "Blue Flames" in "Night Train" album, is in fact very good reviews and impressions from fellow colleagues and the Greek Blues scene. In November 2008 in Kilkis Ranch along with Elias Zaikos (Blues Wire) made a unique and memorable concert. Equally successful was the next live and hang out with Nick Dounoussis by Nick and the Backbone. Many live in the state of Blue Flames in 2009 and 2010, disregarding the album with personal compositions. This work is continued early '11 where he completed three more songs until May, "Through the flames", "Loverman" and "Screaming heart".  Original members: John Salonikidis, John Bolas, Theo Arabatzis, and Kosmas Karagiannidis. Current members are: John Salonikidis, Bolas, Vasilis Kariotes, Nick Zotos and Maria Beloglou. John Salonikidis and Vasilis Kariotes talks about the band, local scene, Nick Dounoussis and Elias Zaikos

John: Blues was always into us, especially into when Theo A. (ex Blue Flames bassist) was suggested to us by a member of the band, back in 2007 to change the sound of the band from classic hard rock to blues-rock…

Vasilis: It was 38 or so years ago, when I first heard Junior Wells playing his harp on "Checkin' Up On My Baby". It was a revelation to me! As soon as I figured out what kind of instrument he plays I bought my first harmonica, a pre-War Marine Band. Note that my father was also playing the harmonica, but used to play only a few Greek tunes. A few years later, in April 1980, a great live concert took place in Thessaloniki's "Alexandreion Melathron". Albert Collins, Koko Taylor & the Chicago Blues-All Stars with Billy Branch. After that unforgettable show, I realized that my future in music has a name: "nuttin but the blues".

John: Our first gig was in 1999 at a local bands rock festival … It went ... good, I think! (just kidding). Some of the first songs that we remember learning were – what else – Paranoid from Black Sabbath, Jimmy Hedrix’s Purple Haze!! Oh, and Peter Gunn Theme from the movie The Blues Brothers, so as you can guess, blues was a major influence from back then. 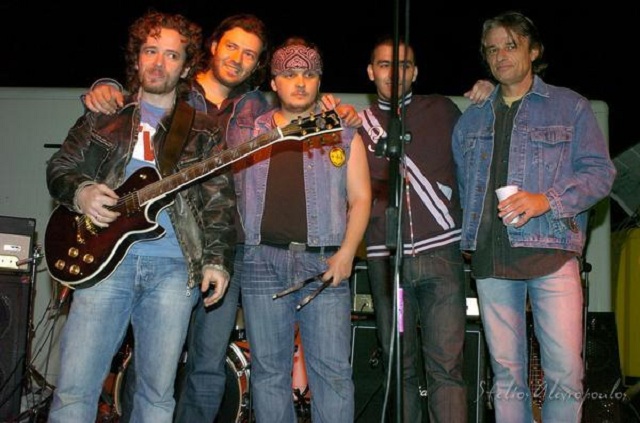 John: Blues like other music genres is a way to express your inner feelings BUT even more, you know…here we're talking about the power of simplicity. It's a different way to attract someone's attention without having to jump up and down and scream like crazy …. Just close your eyes open your soul's antennas and try to create the best of you!

Vasilis: BLUES is the real thing, the root, the source of any other style of “black” music. I was lucky because I started my trip in music with the blues as a guide. That made me confident when I play different genres. Blues is the beauty of simplicity and honesty. You can't play it well if your feeling is fake. Thanks to the blues, I've learned to be an undemanding, self-contained person, "simple kind of man", just like Lynyrd Skynyrd once said.

John: Well we think that the previous answer covers my best moments so far, now regarding the worst? I think that I forgot them….! No, really I think that there aren't “worst” moments when we talk about playing music, we all make mistakes on stage for sure, as long as we are all amateurs and we try for the best but, when they happen we try to make fun out of them!!

John: A lot of memorable gigs, if we have to choose then we would never forget the one that we had in A.U.T.H (University of Thessaloniki)  Also the one with Mr. Elias Zaikos (Blues Wire) and Mr. Kostas Anastasiadis, one of the world’s greatest drummers who played along with us on stage. And of course the gig/jam with Mr. Nick Dounoussis for the same reasons!

Vasilis: When I was 19 year-old student, I had my first gig in my university. A small, acoustic, blues band of four musicians. Our sound was not the best but the first love is the strongest after all. I still remember the opening song, Howlin' Wolf's "Little Red Rooster". I also remember a jam in a special place called Dr. Jazz in Pisa, Italy, with an excellent blues artist, Nick Becattini and his band. Jamming with the "Blues Wire" and "Nick & the backbone" was great too. 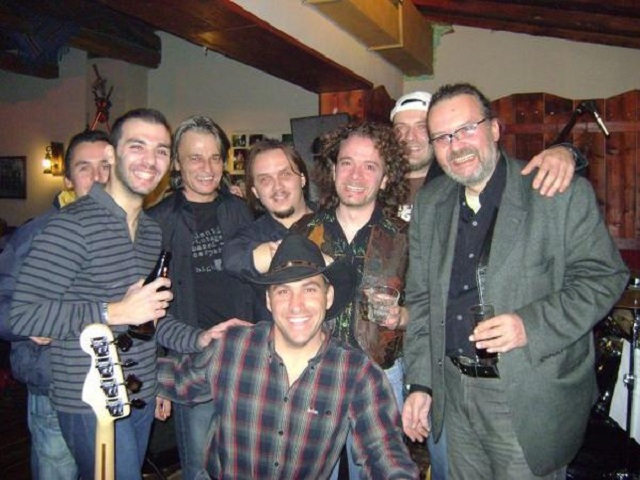 John: Nothing is secret, everything is out there, you hear, you like and you choose what you will add to your way of playing… So we believe we’ve learned a lot from milestones such as Jimi Hendrix, Muddy Waters, B.B. King, S.R. Vaughan, Robert Cray and many more.

Vasilis: Although my father was a player too, I'm completely self-taught. I know it sounds weird but I never got interested in his technique. I learned to play by listening to the LPs of great harp players such as S.B Williamson, Little & Big Walter, Jr. Wells, James Cotton, Lee Oskar, Paul Butterfield, Magic Dick (J. Geils Band), Mark Feltham (Nine Below Zero) and many others. When I began playing the chromatic harmonica, I used to listen to Larry Adler, Toots Thielemans, Stevie Wonder and trumpet players... Nowadays, the Internet is a great teacher too.

Tell me about the beginning of Blue Flames. How did you get together and where did it start?

John: We were in a band called … Gangband. We just decided to change the genre of the band and become more bluesy softened a little but trying to keep the energy at the same time, and it worked, so far. To seal this we built our studio called – what else – Blue Flames Studio, and this was how Blue Flames started! Nowadays, new members have entered, woman's voice, harmonica and a new bass player.

What characterize the sound of the band? What is the “philosophy” of Blue Flames?

John: We have one foot steady on the blues while the other one goes around different styles such as soul, funk, swing and rock…. We still try though to find our “mojo”. It takes a lot of work!

Vasilis: The sound and the "philosophy" of Blue Flames is "Roots & Branches" (btw nice name for a band). I mean we try to mix different styles of black music (branches) with the blues (roots). 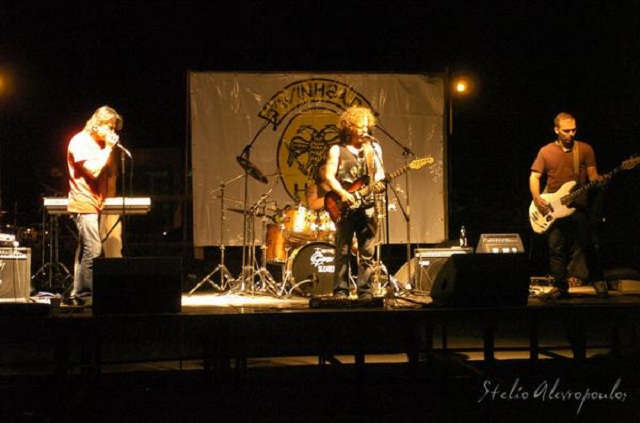 How difficult is it to be a band outside the city walls of Athens?

John: Very difficult because it’s all up to us, from organizing the live, to promotion, the posters etc…Things in big cities as Athens and Thessaloniki are easier we think.

Vasilis: Not easy at all. We live in a small town, Kilkis. That equals a small number of people and an even smaller lot with any interest in the blues. Luckily for us, the city of Thessaloniki is not far away.

What mistake of the Greek scene you want to correct? What would you like to be for the case of the blues in Greece?

John: Live stages in Greece, apart from the fact that are few, don't really be supportive in blues bands.

Vasilis: I might sound a little naggy but I think there is a silly, unhealthy competition among some of the local blues bands. Hope I'm wrong because we all belong to the same family.

Who are the leading representatives of the blues in Greece abroad?

John: If you mean active Greek bands then we all agree that Blues Wire, Blues Cargo, Nick & the Backbones are the leading representatives... Correct me if I’m wrong.

Make an account for current realities of the case of the blues in Greece. How do you describe the local blues scene?

John: There are lots of great blues artists and bands but for most of them music is not top priority; it's not their way to earn their livings.

Vasilis: I see a blossom of the blues in Greece over the last decade. Almost every city in the country nurtures at least one blues band or artist. 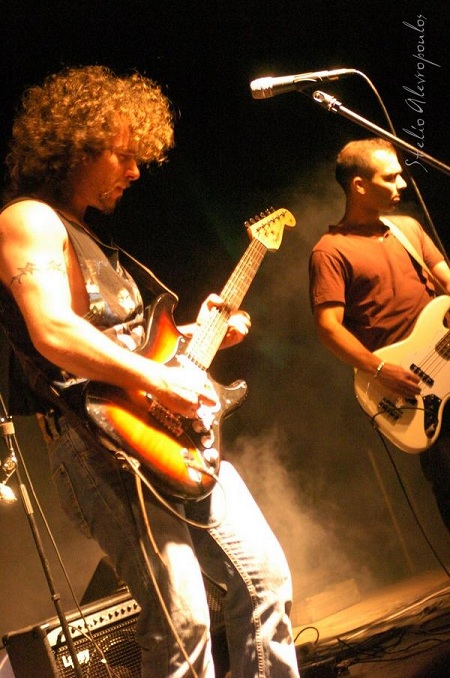 John: Every productive period is interesting.

Vasilis: In my opinion, the period between mid-70s and late 80s was the best. During that time, the blues music was popular to a large part of the Greek population.

Do the media help the blues and what is your opinion about blues.gr?

John: A lot of memories good and bad, it’s going to take us all day and night to talk about them!

Vasilis: I have already mentioned some gigs and jams. I hope to create some more memories in the future.

Do you believe that someone can make a living just by playing the blues in Greece?

John: As we already answered, that’s very difficult. Only few have this chance.

Vasilis: Not easy at all. Only a few are so lucky.

Have you ever thought of leaving your country and finding another place to play your blues?

John: Well that is a dream and under certain ccircumstances, why not? Until then we’ll just dream and play!

Vasilis: Yes and I would, but only if I could make a living by playing my harmonica.