"Definitely it's (Blues) a state of mind! If you got the blues, you got it and you got it even if you're listening to heavy metal! From the other hand it is a huge genre and artistic movement too...it's a combination of the two. It can't be otherwise."

Greek radio broadcaster and Dj Eva Zevgoula talks about Radio, Blues, Local scene and Rock n' Roll culture. Eva says: "I studied Agriculture I am in love with dirt and soil since I was a baby. I remember watering the flowers in my grandma's garden in my free time so I think that the blues came to me by nature. I had it in my blood and I didn't know it. It came out through love...I fell in love with a guy that was a blues man. He loved the blues and played the blues with his guitar, not professionally but he lived through it. I felt something when I first heard Junior Wells but a lightning stroke me when I heard the Thrill is gone played by Luther Allison. He taught me the rest... I play the Blues on the radio mostly on internet radios. I also play soul and classic rock. I play in three different radio stations almost every day. Sundays and Wednesdays on Fly Fm Radio. Sundays of Greek scene and Wednesday midnights full of Blues. Monday of blues and Friday of soul mornings at Anazitisi Records Radio also 4 hours of rock music on Atlantis Fm Radio.                           (Eva Zevgoula / Photo by Yannis Alexiou) 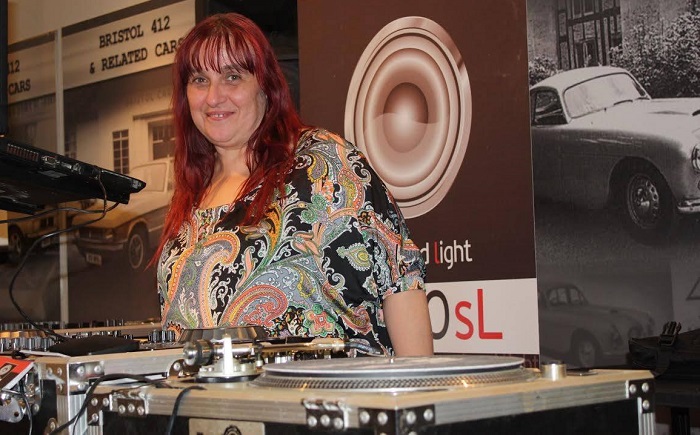 Everyday music as you can see... I also took part as a DJ in big events as Vinyl is Back and Vinyl Market to play the Blues of course. From time to time I write articles for musical websites mainly about the blues. I'm diggin old and new releases all day everyday so you can say that I literally live and breathe the blues."

Not a bit. I think that I was a rocker, talking about my views, by birth...or that my parents that gave me these views were rockers and they didn't know.

How do you describe your radio broadcasts philosophy? How does music affect your mood and inspiration?

It all depends on my mood...I use music to express my feelings, to tell a story with music and lyrics...at times I choose music to trick my mood, meaning that if I'm super sad I could choose happy music to hide my feelings or just to change my mood. Music has saved me from deep sorrow leading to depression due to the death of my beloveds for example. I claim myself as a storyteller, telling stories with music about music.

Are there any fanny moments from studio which you’d like to share with us? What has made you laugh?

Microphone on...I didn't notice it of course and wow!!! I was singing my favorite song on air!!! "you didn't have to did what you did but you did what you did and I thank you...." Paul Rodgers version and suddenly lots of phone calls and messages telling me that I have a nice voice and they want me to sing more often!!!Same thing happened once more with Damn Your Eyes. Now I'm more careful with the microphone I must say....

I miss the passion, the real feeling and the scream only when it's needed. Singers tend to scream at the top of their lungs during the whole song and guitarists play solos of 7-8 minutes the less. Pure boredom... Hope to find a new Howling Wolf...fear? My only fear for the future of music is to lose the feeling and the meaning. "Women do it very well in radio and music scene. Many female radio producers, singers, guitar players worldwide, in Greece as well and drummers too. I don't think that women have any problem of disrespect for example in local radio and music scene. After all we are all real tough cookies. As for me...I'm feeling like a queen, everybody treats me like one."

If you could change one thing in the musical world (and radio) and it would become a reality, what would that be?

No more sexy voices on the radio, no more gossip. Economy of time, meaning that I can't stand any longer ten minutes of guitar solos without purpose and meaning.

If you love them, if you REALLY love them, they love you back and I'm talking about the musicians. It's all about love, hard work, respect. As for the business part...we need to dare and support the ones who dare.

Nowadays? There's no such thing. Back in the past? It changed EVERYTHING.

Do you consider the Blues & Rock specific music genres and artistic movement or do you think it’s a state of mind?

Definitely it's a state of mind! If you got the blues, you got it and you got it even if you're listening to heavy metal! From the other hand it is a huge genre and artistic movement too...it's a combination of the two. It can't be otherwise.

What does to be a female broadcaster in a “Man's World”? What is the status of women in local radio and music scene?

Women do it very well in radio and music scene. Many female radio producers, singers, guitar players worldwide, in Greece as well and drummers too. I don't think that women have any problem of disrespect for example in local radio and music scene. After all we are all real tough cookies. As for me...I'm feeling like a queen, everybody treats me like one.

Where would you really want to go with time machine and what memorabilia (books, records) would you put?

I really want to go in a real old time juke joint and listen to Muddy Waters...or been in Chess Records hidden in a corner of the studio. As for memorabilia... nothin at all... the heart gets the most important.