Hugh drives the whole album on piano and vocals and is joined in the studio by the ‘Queen of New Orleans’ herself, Irma Thomas, blues piano and horns supremo Allen Toussaint, vocal legend Sir Tom Jones and in an especially momentous collaboration on ‘After You’ve Gone’ by his lifelong hero Dr. John. 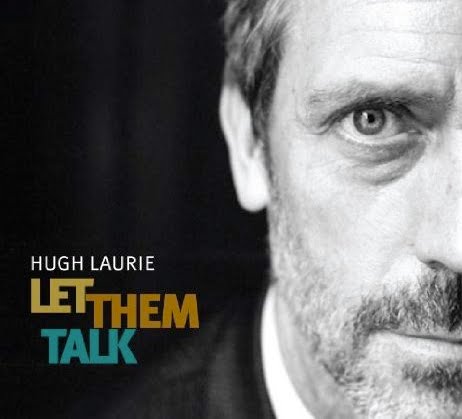 Released on May 9th in Europe, the album launch will be supported by live shows in London, Paris and Berlin and a television special following Hugh’s musical journey to New Orleans and featuring the performances of much of the album filmed at Kingsway Studios in the French Quarter along with Hugh’s band and his incredible collaborators.

But the album is best explained by Hugh himself……..

I was not born in Alabama in the 1890s. You may as well know this now. I’ve never eaten grits, cropped a share, or ridden a boxcar. No gypsy woman said anything to my mother when I was born and there’s no hellhound on my trail, as far as I can judge. Let this record show that I am a white, middle-class Englishman, openly trespassing on the music and myth of the American south.

If that weren’t bad enough, I’m also an actor: one of those pampered ninnies who hasn’t bought a loaf of bread in a decade and can’t find his way through an airport without a babysitter. I wouldn’t be surprised to find that I’ve got some Chinese characters tattooed on my arse. Or elbow. Same thing.

Worst of all, I’ve broken a cardinal rule of art, music, and career paths: actors are supposed to act, and musicians are supposed to music. That’s how it works. You don’t buy fish from a dentist, or ask a plumber for financial advice, so why listen to an actor’s music?

The answer is – there is no answer. If you care about provenance and genealogy, then you should try elsewhere, because I have nothing in your size.

I started piano lessons at the age of 6 with Mrs Hare. She was a nice woman, probably; but in my twisted childhood memory I have cast her as a warty thug who bullied me across the hot coals of do-re-mi. I stuck it for about three months, grinding through Elementary Piano Book One until we reached Swanee River by Stephen Foster. (Foster, as it happens, was also a trespasser. Born in Pennsylvania, he never saw the actual Suwannee River – nor did he set foot in Florida, which adopted the song as its state anthem in 1935. I’m just saying.)

Now you could hardly call Swanee River a blues song - in one of its earliest editions, the score was sold as “An Ethiopian Melody” - but it’s a lot closer than the French lullabys and comical Polish dances that made up the rest of that hellish book.

The day arrived, and Mrs Hare turned the page: “Swanee River”, she read, peering through the pince-nez that I have imagined for her, 45 years later. And then, with a curl of her hairy lip, she read the subtitle: “ ‘Negro Spiritual - Slightly Syncopated.’ Oh dear me no.….”. With that, she flicked the page to Le Tigre Et L’Elephant, or some other unholy nightmare, and my relationship with formal music instruction ended.

And then one day a song came on the radio – I’m pretty sure it was I Can’t Quit You Baby by Willie Dixon – and my whole life changed. A wormhole opened between the minor and major third, and I stepped through into Wonderland. Since then, the blues have made me laugh, weep, dance… well, this is a family record, and I can’t tell you all the things the blues can make me do.

At the centre of this magical new kingdom, high on a hill (which shows you how little I knew back then), stood the golden city of New Orleans. In my imagination, it just straight hummed with music, romance, joy, despair; its rhythms got into my gawky English frame and, at times, made me so happy, and sad, I just didn’t know what to do with myself. New Orleans was my Jerusalem. (The question of why a soft-handed English schoolboy should be touched by music born of slavery and oppression in another city, on another continent, in another century, is for a thousand others to answer before me: from Korner to Clapton, the Rolling Stones to the Joolsing Hollands. Let’s just say it happens.)

Over the next decade, I consumed all the guitarists I could find: Charley Patton and Lead Belly, who was a genius, as was Skip James, Scrapper Blackwell, all the Blinds (Lemon Jefferson, Blake, Willie Johnson, Willie McTell), Son House, Lightnin’ Hopkins, Bo Diddley, Muddy Waters and so many more that we’d be here all night just naming a tenth of them. I tended to favour the piano over the guitar because it stays in one place, which is what I like to do. Guitars appeal to the footloose, the restless. I like sitting a lot.

As for singers, that’s a huge list, with only two names on it: Ray Charles and Bessie Smith.

These great and beautiful artists lived it as they played it: all of them knew the price of a loaf of bread and most had times in their lives when they couldn’t scrape it together. They had credentials, in other words, and I respect those as much as the next man, possibly more.

But at the same time, I could never bear to see this music confined to a glass cabinet, under the heading Culture: Only To Be Handled By Elderly Black Men. That way lies the grave, for the blues and just about everything else; Shakespeare only performed at The Globe, Bach only played by Germans in tights. It’s formaldehyde, and I pray that Lead Belly will never be dead enough to warrant that.

So that’s my only credential - my one dog-eared ID card that I hope will get me through the velvet ropes and into your heart. I love this music, as authentically as I know how, and I want you to love it too. And if you get a thousandth of the pleasure from it that I’ve had, we’re all ahead of the game.