Interview with adorable Leland Sklar with over 2,500 albums under his belt, Bruce "Lee" is a legend

"I look at the world every day and think how nuts it all is. That makes me laugh, for if not I would cry! Seeing my friends and making music makes me smile."

His biography is rich enough and only with his credits. He’s a legend. Leland Bruce "Lee" Sklar was born May 28, 1947 in Milwaukee is an American musician and film score composer. A prominent bass guitarist, Sklar has contributed to over 2,500 albums as a session musician. He has collaborated with a number of well-known performers and recorded sound tracks. Sklar studied music at California State University, Northridge. It was during that time he met James Taylor, who invited him to play bass at some venues. They both thought that the work would be short-term, but soon Taylor's career took off with his first hit records, and Sklar came into the limelight. He was soon asked to record with others, and his long career began. 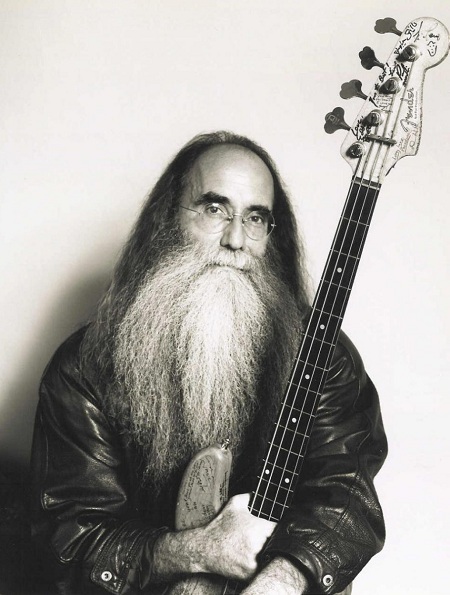 Sklar was a budding pianist before switching to double bass at an early age. His focus was on classical music, though he grew to love pop and rock music. This diversity aided his musical development and ideas, which in turn fueled his creativity. In the studio, he often write his own lines.

How do you describe Leland Sklar sound and progress, what characterize your music philosophy?

I try, as best I can, to create a solid foundation for the music I am working on. A solid, deep, rich tone. The bass being the foundation upon which all the rest of the sonics are built must be defined. I keep my action quite high for sustain. I play hard and do not want to have fret noise and rattling. I have, for decades, used Mandoline fret wire on my basses. It is very thin and makes very little noise when doing glissandos or chords.

I try to think of every day as interesting and enjoyable. I rarely think of what I have accomplished but rather what am I doing today and tomorrow. Most of my highs and lows are not based on music but rather on what is going on at that moment. The worst is when I get a phone call, like the one I got and was told that Jeff Porcaro had passed away. Same with the call I got about Carols Vega. Losing so many dear friends has been the hardest thing I have had to deal with and there have been many. The high points have been interactions with people while I travel on tour. Also, meeting so many gifted artists and musicians over all these years has been a blessing every day! The 1979 Flag tour with James Taylor was amazing. He was so at the height of his powers and the band was killer.  Recording Spectrum with Billy Cobham was wonderful and all the touring with Phil Collins was the best! But, that being said, I have really enjoyed so many moments in my career. Any chance that I get to play music with talented and gifted people is such a joy! I pinch myself all the time realizing how fortunate I have been in this business. And, the fact that there is much more to come. I am busy right now as I have been for years. More pinching please!!!!!

Not sure about meetings? As for memories, once again, it is related to people I have met. I met a wonderful family while on tour with Phil Collins in 1990 at the airport in Glasgow on the way to Dublin. It was a mother, 2 daughters and a little boy named David. We had an experience that I will never forget. It is a very long story but it had a great impact on me. Wonderful people. But, again, I have been doing this going on 44 years now and every day there is something to reflect on that becomes part of my life.

One of the best people I ever knew was the teacher, Mr. Ted Lynn, who got me started on bass at 12 years of age. I had been a piano player since 5 years old and thought that would be my instrument, but when I entered Junior High School they needed a bassist and he convinced me to try it. I loved it and it changed my life. Also, Tommy Tedesco taught me a lot while doing sessions with him. Because of him, I installed a ‘Producer Switch’ on my bass. It has no wires going to it. It is a placebo that makes people think you have done something when you have not, but if they really do not know what they want you can go crazy trying to find it. This way they see me flip a switch and they are happy. 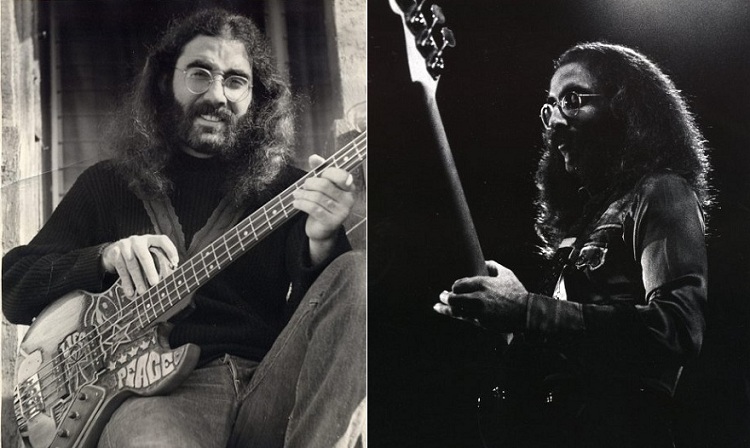 "I try to think of every day as interesting and enjoyable. I rarely think of what I have accomplished but rather what am I doing today and tomorrow."

Are there any funny memories from recording and show time which you’d like to share with us?

There are so many moments in the studio that go from sublime to insane. Very difficult to narrow them down. The music business embraces unusual people and I have seemed to meet and work with a lot of them. Also, the variety of music I have worked on has exposed me to very many different genres and with that people. Each brings an adventure with them.

What do you miss most nowadays from the music of past? How has the music industry changed over the years?

Things were awful for a while. I was working but most of my time was going to peoples houses and overdubbing bass on tracks they had. It is so unsatisfying to do that. But, this past year we have been going back to doing full albums with live players in the room and that is the best! That is where the juices flow as far as creativity. When I first started, it was like guerilla music. Now it is BUSINESS! Not always run by people of passion for music but rather lawyers and accountants. They process is so different. In the old days you had to bring it to the table and perform. Now, you can get sort of close and then they can fix it be correct. Like seeing models in ads and knowing that they do not look like that in real life. When you make music you should be able to do it with no bells and whistles. Get your ass in front of the mic and DO IT! I miss album art. It was always so special. I miss programming an album. A side/B side. How do you create emotion with the sequence of the songs, etc. Much has changed but there is a lot of very talented people making music and for that I am happy. The hardest thing is how do you get your music out there to the people once you have recorded it and how do you make money…..a different world.

What do you learn about yourself from the music circuits? What are your hopes and fears for the future of music? 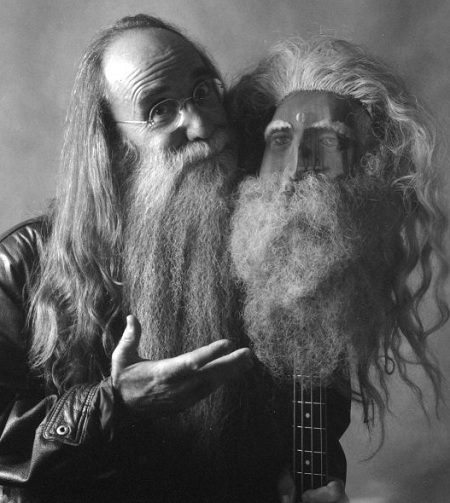 I have good hope for the future. It is the business that needs to be addressed.

How do people make music and get payed so that they can do music full time. There is a new blue print being created now. I just feel so very blessed to still be a first call musician in Los Angeles and loving what I do today as much as I did the first time I walked into a recording studio.

I look at the world every day and think how nuts it all is. That makes me laugh, for if not I would cry! Seeing my friends and making music makes me smile. Having a new adventure all the time. Trying not to get bored. My dogs make me smile. Gentle souls…..

You're also known for you distinctive long flowing beard? How started the idea of this style?

When I graduated high school I just said the hell with it. I was sick of shaving and decided to let it go. I keep trimming it but it became a signature and I am OK with that. I get recognized every where and it is kind of fun. Saved me from having to print business cards.

What are the lines that connect the legacy of Blues, Rock with Soul, Folk and continue to Jazz, Country and beyond?

For me they are all intertwined. In the 60’s I got to play with Jimmy Reed, George ‘Harmonica’ Smith, Magic Sam, Big Mama Thornton, etc. Did the chitlin’ circuit. Loved the English blues movement. Was a huge Cream, Zep, Hendrix fan. On and on. They all have their own distinctive sound yet there are commonalities throughout them. I have recorded and performed in all those styles yet have had to change what I do very little.

What has been the relationship between music and old car in your life? How does affect your mood and inspiration? 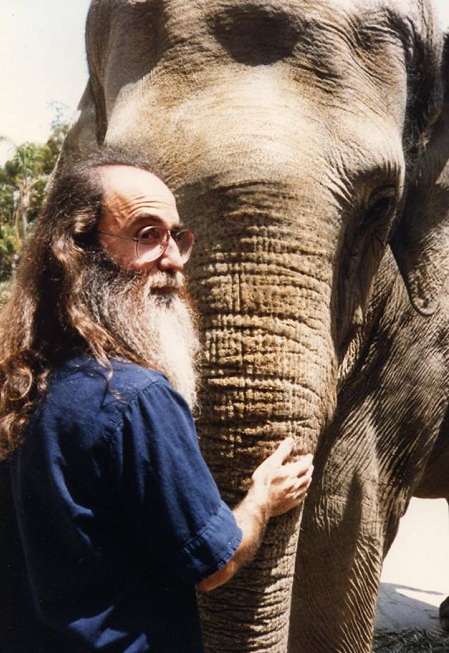 Growing up in Southern California it was a car culture. Hot Rods, customs, drag racing, etc. It has always been a part of my life and I still love it to this day! Part of living here is guess!

Where would you really wanna go via a time machine and what memorabilia (records, photos etc.) would you put in?

This is probably the hardest question. There are things in the past I would love to go back and see, like the Pyramids when they were covered in polished marble or the Colliseum in Rome the same way! Go back as far as the dinosaurs. But, I would love to see the future and where things will be long after I am gone. I would really have to think about what to bring as representative of our times. Not really sure. Maybe some Twinkies! They will last a thousand years.