"I think my favorite lesson from the blues is that real gold is found somewhere scattered and buried in the dirt, waiting to be found by the ones who seek it."

One Hand Dan (Daniel L. Russell) is a 29 year old ex-professional wrestler turned blues musician from Alabama. Born with one hand in Splendora, Texas, his can do attitude is inspirational to many. Dan always wanted to learn the guitar but never pursued it because he never thought he would be able to play it well enough to try. Well, he didn’t actually purchase a guitar. He acquired it from a friend who took it out of the trash from a remodeled Ruby Tuesdays. A short time later he met his wife Lizzie who inspired him to change his life around and live and give 110% again. She bought him his first cigar box guitar kit. After building that first kit, the hallway to their 2nd floor apartment became a permanent workspace. At the time, Dan was pulling 60 hours a week loading beer trucks and saved money to buy his first Resonator guitar. Inspired by slide guitar, he knew the right equipment was important to his sound. With his gorgeous guitar, he began to perform locally on the streets of Muscle Shoals. 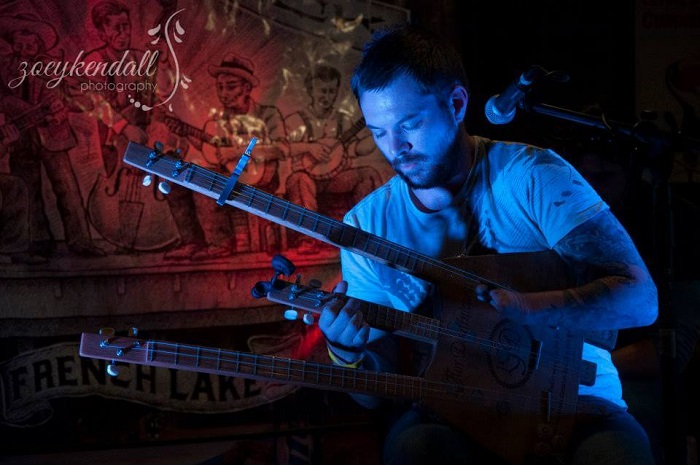 After years of living in the Shoals, Dan and Lizzie moved to Tuscaloosa where he had a vision of a 3 neck cigar box guitar. Dan’s love for country and Delta blues started seeping into his performances. As a pro wrestler, Dan knew how to work a crowd, knowledge which became very helpful to this struggling musician. Dan loves to start random conversations of hilarity with strangers, oft times during his performances. Dan has been included on two Tuscaloosa tourism videos, and performed at a number of venues, festivals, and street corners. Festivals include Chicago Cigar Box Guitar festival, Clarksdale Juke Joint Festival, Flying Monkey Cigar box guitar Festival, Oxford Fringe Fest, Lowebowe Stage at Deep Blues Fest, and Nickel Guitars at Bonnaroo 2014, and recently a featured artist in "W.C Handy, Mr. Handy's Blues". Keep an ear out for the cries of delta blues slide guitar and an eye out for the infamous homemade instruments and minnow bucket tip jar.

I always have had this opinion that if something is a trend for the masses, there is definitely an untold story somewhere. I was always told to listen to Robert Johnson, and Blind Willie Johnson and others alike that are the more popular of blues artist. I seemed to hear the same sayings about the blues as well. “Just a good man feeling bad” or what if it’s a “Bad man feeling good”??? I was inspired to do my own research of blues, found the names and songs of real musicians who I never heard of bring such soul, and power to the blues. I think my favorite lesson from the blues is that real gold is found somewhere scattered and buried in the dirt, waiting to be found by the ones who seek it.

How do you describe Daniel Russell sound and songbook? What characterize your music philosophy? 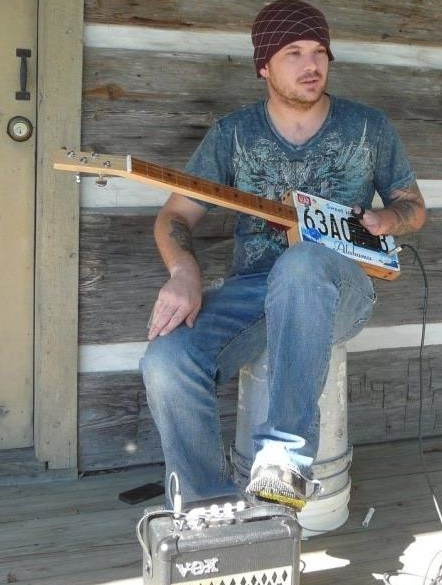 My music that I perform with my band is inspired by North Mississippi Juke players, all about hard bass in your chest, and guitar licks that hurt! When I busk on the streets I only bring a small amp, no microphone. I turn my amp to the corner of a building projecting the sound to carry, but not in a loud way. I play a rhythm, and play a separate lick and rolls for every person that walks by. I usually look them in the eyes, trying to get them to notice that was for them. If the lick is bad, I just look down…. ha-ha

Being from Muscle Shoals Alabama, I’ve met allot of influential and amazing players. I did get to become friends with Jerry Masters, former studio musician for Bill Black and world famous sound engineer. He was so nice, and spoke about the love he had for his wife Jan, and how lucky a bunch of shmucks like us end up with such amazing women. I jammed with him once, and I asked him for opinion. He said “Practice, allot…” so I did. He is such a great guy; he let me play with one of Duane Allman Pill Bottle Slide before!

Are there any memories from gigs, jams, and busking time which you’d like to share with us?

I feel like I have a new story every gig. I would have to say my favorite so far has been busking in front of a Nickel Guitars vendor tent at Bonnaroo 2014 Music Festival. I made the most variety of tips ranging in change, cash bracelets, headbands, marijuana, candy, doodles on paper, and a spirit rock. I still have most of those things. I met such great people, and watched them anger some other vendors by blocking up Centeroo squatting down in the grass and checking me out.

I miss the poetry in blues music from the old country blues songsters. Not every song has to be about a man and a woman, but sometimes the love of a grasshopper and a cockroach. The comparison of sexual acts to food preparation. I’m excited for the next blues wave. The best thing about music is, if you don’t like it you can always listen to the classics! 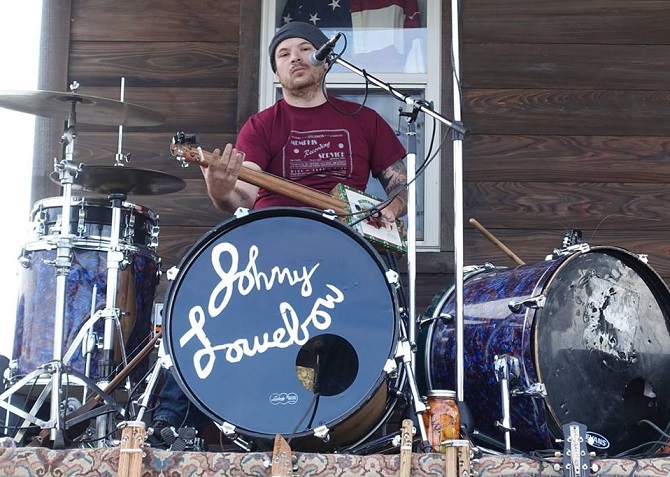 "The Blues is natural and pure. It is the fundamentals and an absolute art that originated in a young country. The Blues isn’t just a form of music. It’s a feeling that we all know well."

I would reform publishing companies, and put their greedy lawyers on trial to pay back pay for royalties that haven’t been paid to artist. Music is a gift for everyone to share, not something for Nashville lawyers to throw fancy parties to impress young hopeful musicians into believing their lies about the music business.

Do you know why the sound of slide and cigar box guitar is connected to the blues? What are the secrets of?

I think most people have heard the stories, and seen the videos of how all the blues greats learned to play on one string Diddley Bows. I’m not sure if its 100% true, but you can get the gist of a blues song with one string no doubt about it. I run across allot of musicians who carry around a Cigar-Box-Guitar to their gigs, then play a raunchy blues song with a slide to portray a Mississippi blues gimmick. I myself, along with others try hard not to let the Cigar-Box-Guitar be held to the stereotype. My guitars are made for me, the way I want it. They also represent me, and where I’m from. I can’t afford a Gibson Les Paul. I can’t afford the Epiphone Les Paul either. Many young starving musicians can’t afford guitars like that. It always made me question young bands who are making the same money I do, but have thousands of dollars of guitars sitting on the stage. You don’t need expensive equipment to play the blues. 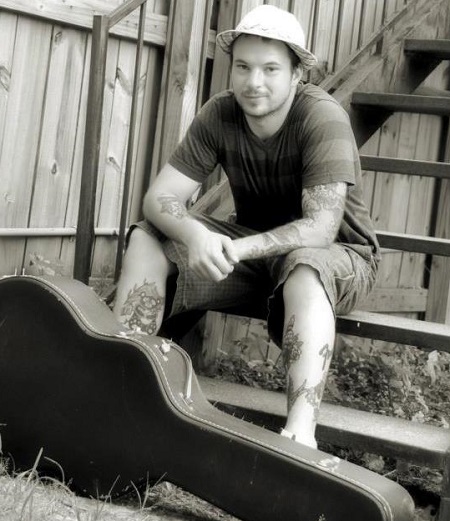 KickStarter online crowd funded bands make me laugh. They form the band, beg for money from all of their friends and family, spend it on an album and band stickers. Three months later they break up. They should have donated the money to charity if that was the case. There’s nothing wrong with help! We all need it, but you should always remember to each and every single person who believes in you deserves everything you have to give. Money has to be made by blood, sweat, and tears by someone. Anyone willing to give it to you so you can live out your dreams is an honor. I hope more musicians will appreciate it.

What are the lines that connect the legacy of Pre/Post War Blues with the new generation of artists?

I think the Black Keys, and Jack White did a great job bringing in a new audience to the blues. Kind of reminds me of how the Rolling Stones, THEM, and Cream did in their day. It’s nothing close to the original, but it builds a bridge to the mainstream. When I set up to play, the first lick I do is the old school Elmore James Slide lick on the 12. No matter who is in the room, I have their attention.

Why did you think that the Blues and Muscle Shoals music continues to generate such a devoted following?

The Blues is natural and pure. It is the fundamentals and an absolute art that originated in a young country. The Blues isn’t just a form of music. It’s a feeling that we all know well. I remember being 23; I was involved with a girl who had another man. She would swear she left him. I used to drive by her house early in the morning on my way to work and always see his car in the drive way. That feeling of nausea, panic, and rage... That’s the Blues… The Muscle Shoals Sound is like a love story. Muscle Shoals is a small place, yet so much music came from there. The opportunities was created from really talented musicians were given the chance to step to the plate and do great things. Just about everyone from the area today went to high school with a successful shoals musician. Everyone knows where FAME studios are located. It’s crazy the people you end up jamming with. You can be out at a jam night and be playing with Neil Young’s band! One day I was busking, and Donna Jean GodShaux (backup singer for Percy Sledge, and the Grateful Dead) walks by gives me a big smile and a peace sign! It is an amazing feeling that these great musicians are tangible and real people walking through your hometown. 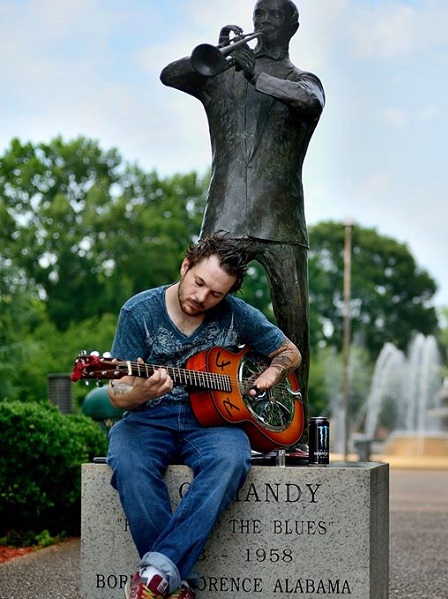 I would go back about 10 years ago and spend time in the North Mississippi Hill Country. I would hang out at Junior Kimbroughs Juke Joint. Allot of the last real Mississippi were still juk’n every weekend. They didn’t have set list, times, or merchandise. You play, they dance and drink. Sadly most the North Mississippi Bluesmen is dead. They never made much money, not like the guys you heard of. These men were MEN. They worked, the felt struggle, and they played the blues because that’s what came out. RIP Robert Beflour.