"I’m a hopeless nostalgic and I really would love that jazz and blues was just mainstream music, like it used to be in a pretty big part of the Occidental world."

Bob Sands and Marina Ferrer are a soulful husband-and-wife music team in Spain who perform and record with many difference projects. Marina Ferrer Canal is the singer of The Tribulettes and El Molino Big Band. Saxophonist Bob Sands was born in Manhattan, USA. In 1987 and 1988, he receives The Honorable Mention Prize from the magazine Down Beat. In 1992 he emigrates to Spain, where he currently lives. He has participated in international tours with many groups, including: Lionel Hampton Big Band and The Glenn Miller Orchestra. 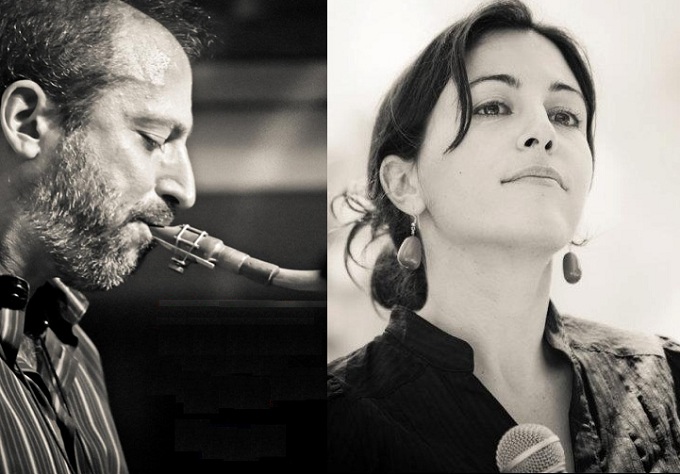 He has performed with: Lionel Hampton, Dizzy Gillespie, Paquito D’Rivera, Gerry Mulligan, Mel Lewis, Garry Smullyan, Clark Terry, Mark Murphy, Dee Dee Bridgewater, Ron McClure, Kurt Weiss and J.J. Johnson, among many others. Since his relocation in Europe, he has played with many European musicians. In 1998, He releases his first record as a leader, for Fresh Sound Records, with the participation of Albert Bover, Carlos Barretto, Philipe Soiratt, Perico Sambeat and Kurt Weiss. Currently, he works as a bandleader, freelance musician and professor of jazz harmony and Big Band conductor at Musikene in San Sebastian. His current projects include his quartet, trio and The Bob Sands Big Band, which he directs when his busy studio and concert career permit it. Bob and Marina talks about the Swing, Jazz, Blues, Soul; and local scene.

How do you describe The Tribulettes and El Molino Big Band progress?

Marina: Tribulettes started out of the desire of making a band in which the voice and vocal arrangements were the protagonist. Then, as we surrounded by amazing musicians, we cannot talk about a vocal band, but just a great band. We have amazing improvisers like Bob Sands on saxophone and Santi Cañada on trombone.

El Molino Big Band was born in El Molino School of Arts about two years ago, but nowadays it performs professional gigs such as for swing dancing events. The director, Bob Sands, has really achieved a great sound in this band formed by young professionals mainly. 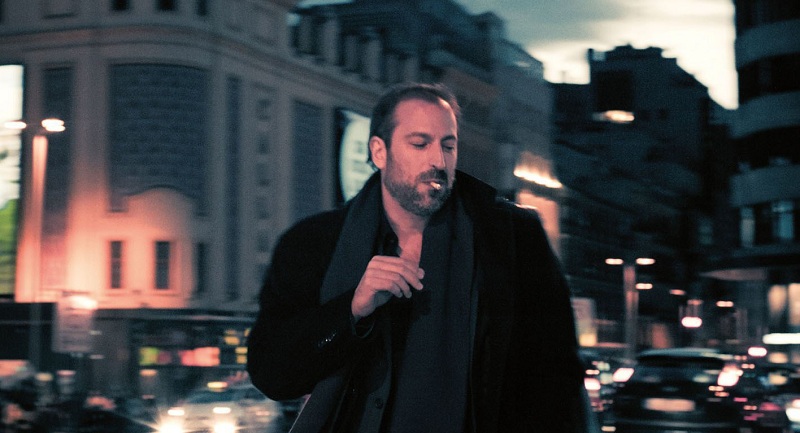 "Jazz (Blues for me is a sub category of jazz) is still vital because it expresses emotions that other art forms can´t."

How do you describe your sound and progress, what characterize your musical philosophy?

Bob: I think my sound and progress have been slow and steady and have steadily deepen with my experience. My musical philosophy is basically to try to be as honest and personal as you can while always being aware of the tradition.

Marina: I think music has to tell things (weather its vocal or not), make you travel and make you feel. I don’t believe in strictly intellectual music, I think it has to have soul no matter what.

Why do you think that Jazz and Blues music continues to generate such a devoted following?

Bob: Jazz (Blues for me is a sub category of jazz) is still vital because it expresses emotions that other art forms can´t.

Marina: Precisely for what I mentioned above, it has a great amount of soul in it.

Bob: The best jams or gigs I´ve ever played in were when there were unrepeatable moments. Magic if you will. Too many to single one out.

Marina: I remember a tour in Morocco some years ago with a didactic show for kids called “Jazz at School”. We were part of the Tanjazz festival in Tanger, in a beautiful palace, with great jams after the shows, and then we toured around towns in Morocco, where they had hardly heard jazz before. The concerts were free since we were payed by the Cervantes Institute of Spain, so the auditoriums were really packed. The response of the people, especially the youngsters, was simply unforgettable. I hadn’t seen such sincere enthusiasm in my whole life, and still haven’t. 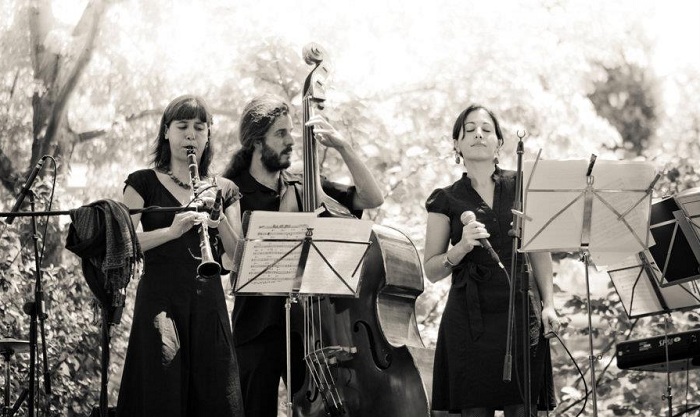 "I think music has to tell things (weather its vocal or not), make you travel and make you feel. I don’t believe in strictly intellectual music, I think it has to have soul no matter what."

Bob: Meeting all the masters I´ve played with has been key for me, but perhaps hanging with Diz after a gig and talking for 3 hours was the heaviest.  Also, James Moody told me to practice slowly.

Marina: Well, musically, having met my husband Bob Sands has changed me completely. I am still learning from him and trying to benefit from his talent as much as I can.  I think the best advice is “listen to the bass!” ha, ha

Are there any memories from The Tribulettes and El Molino Big Band which you’d like to share with us?

Marina: I remember some gigs with Tribulettes were the energy was really, really high, people going nuts about the band, clubs packed…The excitement and the fun in this gigs is indescribable, and the complicity among the three singers too.

With El Molino Big Band the greatest gig was last July, in which we played for a huge swing dance meeting in a lovely venue (Galileo Gallei). There were hundreds of wonderful dancers dressed in their vintage clothing, dancing like crazies. You could understand and see how swing music was really meant to be danced. The energy flowing from all these dancers was just amazing.

I also remember with nostalgia those gigs (in both bands) in which I performed with a huge belly, bearing my baby girl inside. 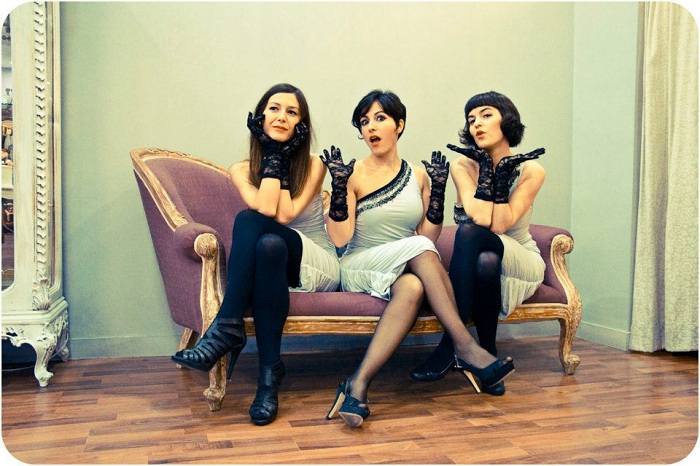 "Soul and BluesI guess is a vehicle that connects directly with the best and most human part of me. It’s a language of emotions and of love." (Photo: The Tribulettes)

Bob: Recording is a bit of a mystery. You can´t be afraid but you can´t throw caution to the wind 100%. It´s a question of being in shape, comfortable and lucky. Playing  is the same, although you have more freedom to gamble, depending on the context.

From the musical point of view what are the differences between American and European Jazz scene?

Bob: There is still a cultural gap when it comes to really understanding the jazz tradition in some countries in Europe. But there are European players who are every bit as good as Americans all over. As far as audiences are concerned, it really depends on the country and in the States on the city.

What do you miss most nowadays from the jazz of the past? What are your hopes and fears for the future of music?

Bob: I suppose I miss not being in an era when doing what I do isn´t more widely appreciated. I don´t even mean on a commercial scale, I just mean on a basic professional level. I feel like I am trained to do somethings that are no longer very important to a lot of people. That´s why my career as a soloist sometimes makes more sense than being a sideman. But as long as I can reach some people, that´s enough. I actually have high hopes for the future of this music, as I assume there will always be people who look beyond the current mindless trend for something deeper. Lady Gaga will not be here in 200 years. Duke Ellington will.

Marina: I’m a hopeless nostalgic and I really would love that jazz and blues was just mainstream music, like it used to be in a pretty big part of the Occidental world. I’d like teenagers getting together to listen and dance jazz instead of going to huge discos often dehumanized, where all the fun comes from computers and chemistry. I wish live music were an everyday thing instead of something exceptional, and no, by live music I don’t mean dj’s.

My fears for the future of music... many. My hopes, well, there are people like Brad Mehldau or Kurt Rosenwinkel that constitute a ray of sunshine and fresh air, and suggest us a wonderful new path. 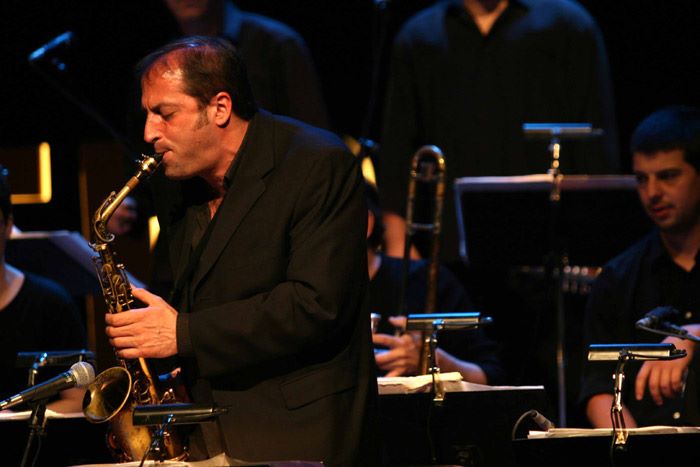 "I actually have high hopes for the future of this music, as I assume there will always be people who look beyond the current mindless trend for something deeper. Lady Gaga will not be here in 200 years. Duke Ellington will."

Which memories from Lionel Hampton, Dizzy Gillespie and Mel Lewis makes you smile?

Bob: Lionel Hampton doing the same encore 3 times in Paris and not realizing it. Me making Dizzy laugh so hard he had to sit down and me understanding with Mel Lewis taught me that power comes from precision not volume.

Make an account of the case of the blues in Spain. Do you believe in the existence of real local jazz blues scene?

Marina: I know in Madrid the black music scene is not bad at all, considering all the difficulties constantly coming from our politicians, which seem totally determined to wipe out any kind of culture in town.

What are the lines that connect the legacy of Blues with Soul and continue to Jazz and Swing music?

Bob: I´m afraid you´ve got it backwards. Blues is and always was part of jazz. I suspect what you call blues is really rhythm and blues and soul of course comes much later. They are all outgrowths of the tradition that is jazz. The swing era was the commercially acceptable (i.e. for whites) version of black music that was good for dancing and not too threatening or difficult for non jazz fans to understand or enjoy. Sorry to get all professorial on you, but you should really do your homework before an interview.

Marina: Well, I guess it all comes from the fusion from the black sonorities and rhythms from Africa from the slaves and the European musical tradition. And from there, the evolution of it and its constant enrichment has made all the rest. 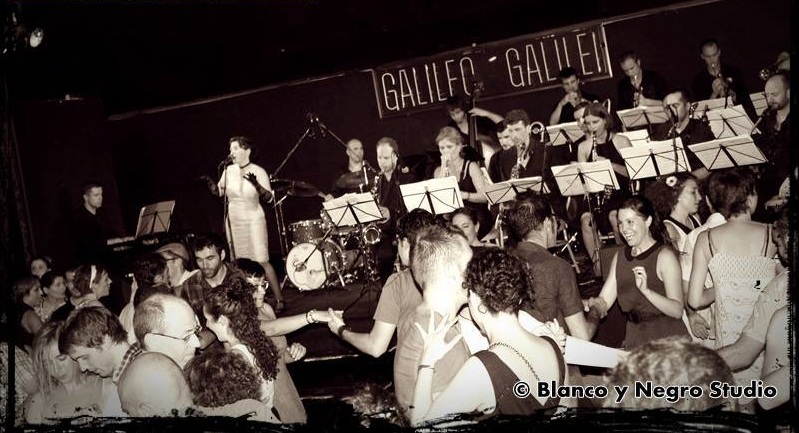 "I wish live music were an everyday thing instead of something exceptional, and no, by live music I don’t mean dj’s." (Photo: El Molino Big Band at Galileo Gallei)

What does to be a showwoman in a “Man World” as James Brown says?

Marina: Ha, ha, well, until now I must say all the musicians I have worked with have been extremely respectful and nice with me, so has been the audience.

With Tribulettes, we face the “sexy singers” role with a lot of sense of humor, I think, and the audience knows it.

What does the Soul & Blues mean to you?

Marina: Well, I guess is a vehicle that connects directly with the best and most human part of me. It’s a language of emotions and of love.

Marina: I’d love to spend a night at the Cotton Club sometime in the 30’s listening to Ella Fitzgerald, Duke Ellington…whoever was around at the time. 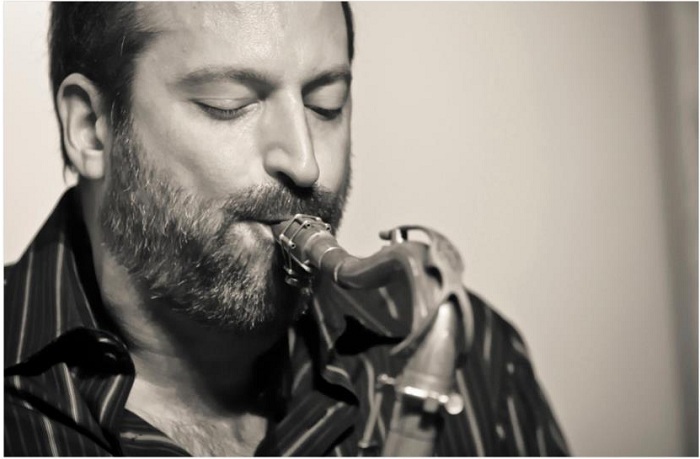