Interview with Barefoot iano of Mountain Men - Australian in France and, harmonica player, and also musician!

"Words are great things, and when strung together to make poetry, the effect can be mesmerising, but music and words go together like bread and cheese, beer and pizza, night and day, men and women…"

What the hell is a Barefoot iano?

"Came out of Oz in ’93 and got myself involved in the French music scene as a harmonica/sax player with the Grenoble based “Sunset Blues Band”. Had a bunch of fun and did a stack of growing, musically speaking. We recorded an album “Let me try” in ’94, and the band split in ’95. From here I got myself involved with the second guitarist, one young Marko Bonnefoy, who encouraged me to sing up front. Considering him to be a fine player, I followed that dream to be the voice, and “Barefoot iano” was off and running….well sort of. We did a duo thing we called “Blues ‘n’ Stuff” for the next couple of years, recorded a cassette and gigged all over the Rhone Alps region… 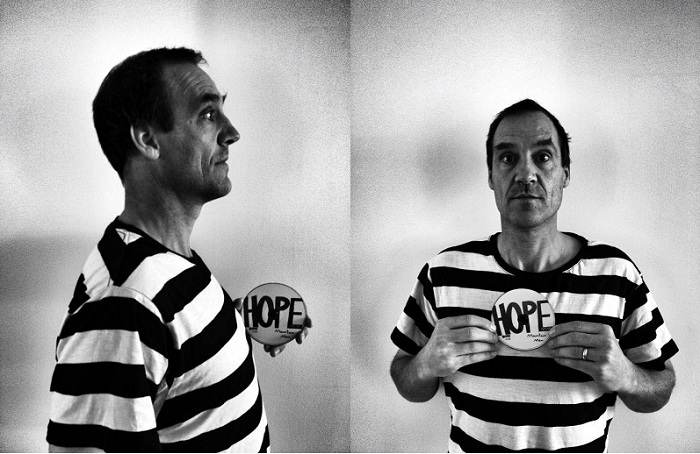 Around 2005 I started to get a little lazy on the job hunting side of things ; the teaching was going OK, and I’d figured that I could hold down a gig on my ownsome. The duo / band thing began to fall by the wayside, and I began to do more solo work. In August 2005 I met Mr. Mat at a gg I was doing in the Chartreuse, and an end of noght jam sealed our fate – MouNtain men were born."

Mountain Men is an acoustic blues duo from somewhere in the south eastern French Alps. From the valley below, Ian ‘Barefoot iano’ Giddey plays harmonica. Noted especially for his presence on stage, Iano was Australian 1993 harmonica champion, and placed 4th in the blues/rock category of the 1993 and 1997 trossingen world harmonica championships. His main line: "music comes first".  Since meeting in 2005, they've had a lot of fun...and count on having a whole bunch more. Mountain Men’s latest live album ‘Chante Georges Brassens’ released on 5th May 2014.

I’m not sure I learn anything about myself from the blues, but I feel that the blues (we play) is a reflection of who we are and how we live and love.

How do you describe your sound and progress, what characterizes your music philosophy?

My sound is personal. It is, or at least I try to make it a direct link from my heart to the listener.

Progress is a long process for me, but not an unplesant one, as I’ve learned to turn work into play.

Philosophically speaking, musicality is the most important thing when playing, be it a publique performance or a jam or simply practicing scales in the kitchen. 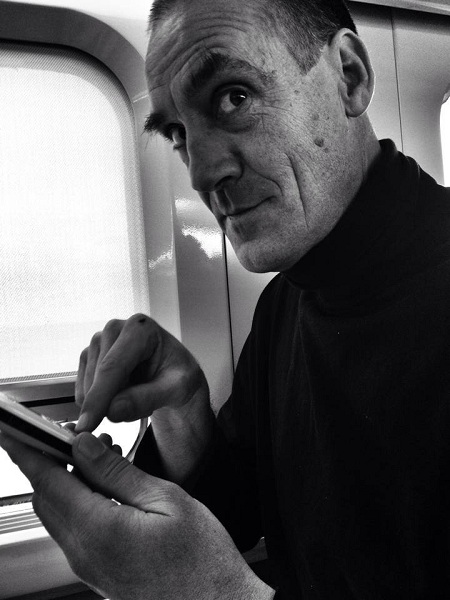 Because, as I mentioned above – it reflects life and the way we live and love. It is a passionate music, coming from the hearts and souls of those who are at its origins, and passion is something which naturally attracts followers.

"My sound is personal. It is, or at least I try to make it a direct link from my heart to the listener."

What is the relationship between music and poetry? What would you like to ask Georges Brassens?

I think that music makes poetry accessible to a wider audience.

Words are great things, and when strung together to make poetry, the effect can be mesmerising, but music and words go together like bread and cheese, beer and pizza, night and day, men and women…

If it were possible to have Georges Brassens answer a question, then it would be : “How is life on the other side is treating you?”.

If I were able to cross paths with the man himself : “Hey George, any chance of blowing some harp with you?”

What are some of the most memorable gigs and jams you’ve had? Which memory makes you smile?

All my (musical) memories make me smile – either through the pleausure of reliving a particular moment, or the relief of it being over and done with.

Some memorable gigs and jams…when I start thinking, there are soooo many….it’s like a giant patchwork of images and sounds…from the late 70s – ealy 80s jamming at parties, on the beach, in pubs with whoever let me get up. On the travellers route through south east Asia, playing with whoever I crossed paths with. Australian ski station gigs and days in the sun on the terrace with other musicians there to do the bars at night. The States in ’93 and the trip continues, with a collection of instruments and innumerable musicians in Seattle, New Orleans, New York, Portland – Maine…the same year in Trossingen, Germany for the international harmonica festival – having a guitar makes you a popular person among harmonica players…Olympia, Paris in ’96 with legendary French folksinger Graeme Allwright and a band of frightengly good musicians.  The mouNtain men years…beginning with an end of night jam from which the duo was born, trips to Memphis, West Michigan, Montréal, Croatia, Turkey, Italy…major blues and jazz festivals in France…aftershow parties with organizers or fans without “time to go home” limits…and the list goes on… 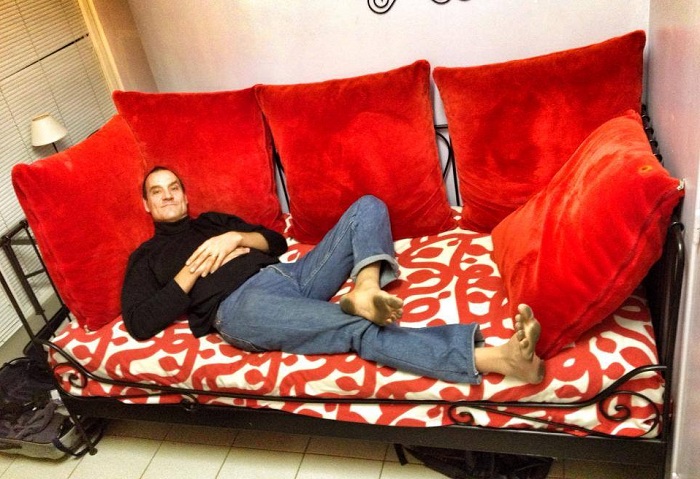 "I’m not sure I learn anything about myself from the blues, but I feel that the blues (we play) is a reflection of who we are and how we live and love."

Before Mat?  Probably my wife, who brought me to France, where I’ve been since 1993.

I don’t miss anything.

Blues of the past are still accessible in recorded form, and nowadays there are many musicians doing their thing, carrying the torch so to speak. The mix of different influences is just fantastic.

I have no fear for the future of music.

I sincerely hope that it will become so attractive and accessible that everyone, everywhere will prefer playing or listening to live music rather than watching TV, or “playing” with guns.

What’s been your experience from the Africa and US? Are there any memories which you’d like to share with us?

The States were fabulous. The people there are incredibly hospitable. The musicians impressed the hell out of me, both with their playing, and their acceptance and encouragement of my playing and myself.

Opening for Watermelon Slim at Billy’s  in Grand Rapids, Michigan – a complete smack in the face when the man himself got up and just tore the place apart.

Africa was great too, but a much shorter trip. It was an important moment in the evolution of the relational side of MouNtain men – we grew a lot as individuals, and as friends.

Playing on a dead dune, 2 hours in a 4wd from the nearest real road in the Saal region of Burkina Faso – these people, men, women and children just came in out of the desert, on foot. There must have been nearly 300 of them, and they listened, then danced as we played with percussionist Baba Konaté (Burkina), and guitarist singer Koudédé (Niger). 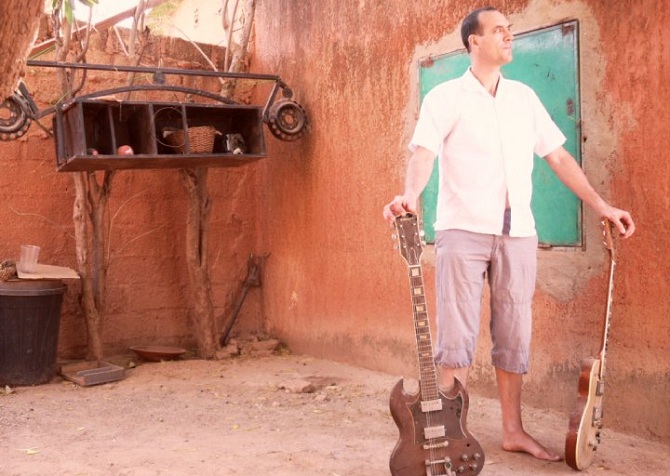 "Philosophically speaking, musicality is the most important thing when playing, be it a publique performance or a jam or simply practicing scales in the kitchen."

What are the lines that connect the legacy of Blues from Africa to States and from Europe to beyond?

I’m sorry but I have absolutely no idea, and for fear of sounding like a pretentious would be intellectual I’m going to have to leave it at that…unless of course it’s the Irish…?

Make an account of the Aussie Blues scene. What has made you laugh lately and what has touched you (emotionally)?

Having spent the month of January (2014) there, I noticed that around the Sydney area there are a lot of musicians doing (blues) gigs and open mic nights. I would imagine that Melbourne and Perth have similar scenes. Take into consideration the fact that this style is not part of Australian musical culture roots, and you have a blues which is not only alive and well, but growing into something with its own personal identity - call it “Australian blues” if you will.

“Old schooler” harmonicist singer, Continental Robert Susz, whose “Mighty reapers of vengance” have been the backing band for many touring American remains a sure value – he currently has yong bloke, Illya Szweck holding down the main guitar job. There are a few others, young also, like Ray Beadle, Peter Cornelius, Dallas Frasca, who are the new guard and who will become, or are already forces to be reckoned with. This is of course a very limited list, as I’ve been out of touch with the Australian scene for a lot of years.

For my recent doses of laughter the clowns we play during our current studio sessions do wonders to take the pressure off the expectations we set for ourselves.

On the emotional side I often find myself experiencing strong moments at the end of our gigs, during the time when we sign CDs – people coming and telling us how much they enjoy what we do – it’s a strange feeling to touch people to such an extent simply by playing, and it makes me feel so privileged to have been graced with such a “job” if I dare call it that… Seriously? No, I can’t do it…let’s see…there was this day way back in 1983, and these two women, lovely young things, who…no, really it’s too dangerous to start playing with the past – you could get into a whole lot of trouble…

But if I could, I’d go back to that day and I’d take both of them to bed as I’m sure they wanted me to.