"It must be understood, Blues is much more than music. The Blues touches all of life: love, pain, joy, hate, enrichment, revolution, little and big victories, hope, spirituality, and on and on...."

Lincoln T Beauchamp Jr. (Chicago Beau) was born on the south-side of Chicago on 13 February 1949, into a house of music. The recordings of Dinah Washington, Coleman Hawkins, Miles, Billie Holiday, Duke, Ella and others inundated his senses from the beginning. From the age of 10 until 15, Beau studied tap-dancing with the great Afro-Cuban dancer and choreographer, Jimmy Payne. He participated in many Cabaret-type shows that were popular during that era. A show could consist of performances by Afro-Cuban dancers, magicians, tap dancers, Jazz and Blues performers, and drill teams. Beau was becoming quite a tap-dancer, but it was the Blues and Jazz elements of these shows that really held his interest. He became so interested in Blues that he began sneaking around to Blues clubs after school to listen to Blues bands rehearse. On famous 47th street, he would slip into the 708 Club that sizzled at night with artists like Muddy, Wolf, Sonny Boy, Big Mama Thornton, Little Walter, and Billy Boy Arnold. Up the street from there was the Sutherland Lounge that featured Jazz and Blues acts such as Ella Fitzgerald, Esther Philips, Von Freeman, Louis Armstrong, Dexter Gordon, Dizzy Gillispie, Chico Hamilton, Philly Joe Jones, and nearly everyone that had a name.                          Chicago Beau, Brooklyn, NY, Photo by Deborah Bowie 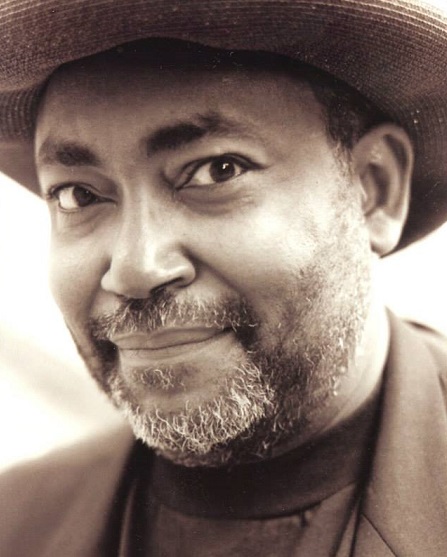 Little did Beau know at the time that some of these performers he watched and listened to would have a permanent impact on his life: Billy Boy Arnold gave him harmonica lessons, and Muddy Waters gave him his name, ‘Chicago Beau.’ After spending three years from the age of 17 playing harmonica and singing in small clubs, mining and logging camps, and on street corners from Chicago, to Boston, to Nova Scotia, to Amsterdam, he moved to Paris where he met, performed and recorded with Archie Shepp. Beau considers the first recording with Shepp to be the beginning of his professional career. Chicago Beau has recorded and performed with some of the most respected names in music including Memphis Slim, Billy Cobham, Art Ensemble of Chicago, Anthony Braxton, Pinetop Perkins, Jimmy Dawkins, Johnny Shines, Billy Boy Arnold, Fontella Bass, Lester Bowie, Philly Joe Jones, Deitra Farr, Frank Zappa, Sunnyland Slim, and others. As a record producer Beau has recorded some of Chicago's finest Blues artists.Chicago Beau is committed to the literary side of Blues culture. In 1988 he founded Literati Internazionale, a publishing company dedicated to Blues writing and multi-culturalism. As a writer, Chicago Beau has written numerous articles and books. Beau speaks at Universities, Schools, and Festivals, and his teaching specialties include, 'Non-Fiction Writing Workshops.' Today Beauchamp stays busy as a blues harmonica player, record producer, publisher, writer, and lecturer.

Living is a learning experience. The Blues, including music, and beyond, have always been who I am. The Blues is the heritage and lifestyle of Africans in the Americas; and an emotional and creative response to unfair social, political, and economic conditions endured for centuries, and that still remain a troubling part of American culture. It must be understood, Blues is much more than music. The Blues touches all of life: love, pain, joy, hate, enrichment, revolution, little and big victories, hope, spirituality, and on and on.... 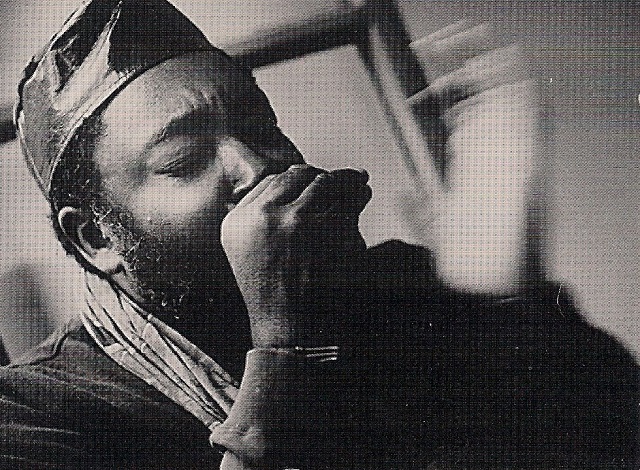 "The Black community was entirely different then, nothing like today. And in many ways, the Blues, and Jazz were the glue that held us together. I miss the role that the Blues had in the community."

How do you describe Chicago Beau progress and mission?

Create without limitation. I like many genres of music, dance, and art. I know my roots, and they are the same as Muddy Waters, Josephine Baker, Charlie Parker, John Coltrane, Gussie Williams, and countless others. I believe in exploring musically, and drawing from the entire Black experience, as well as other cultural collaborations. There are many Blues music aficionados around who are often completely out of touch with Black life, and further out of touch with Living Creatively. Yet they have categorized Black music like laboratory specimens; and the sad thing is that some artists believe what someone else has told them about who they are.

Why did you think that the Blues & Jazz culture continues to generate such a devoted following?

As I said, Blues is a healer; it helps people feel. It also sets the stage for a person to live 'outside of the norm.' That can mean a lot: from a garage band to making mega millions $$$. Without Blues & Jazz, those particular situations would not exist. The Black/Blues experience has been the launching pad for a large number of artists who eventually became quite wealthy. Unfortunately, most of them are not Black. 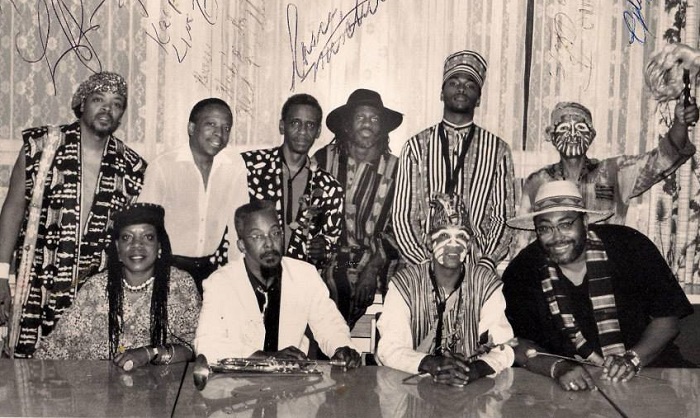 "The Blues is the heritage and lifestyle of Africans in the Americas; and an emotional and creative response to unfair social, political, and economic conditions endured for centuries, and that still remain a troubling part of American culture." (Photo: Beau and the Art Ensemble of Chicago)

I grew up in an extremely diverse environment within Chicago's Black community. There was no particular moment that awakened me. However, the first time I heard Don Gardner and Dee Dee Ford's recording, 'I Need Your Lovin,' I knew I wanted to shout the Blues. I think that was in 1959, before the song hit the charts.

What is the best advice you ever gave you?

Remain true to my crafts, and love women.

Are there any memories from Muddy, Memphis Slim, Archie Shepp, and Frank Zappa which you’d like to share?

There are many recollections, but most of them are going in my memoir. Importantly though, Muddy gave me my name, Chicago Beau, in order to distinguish me from his driver and valet, Big Bo. When Muddy would call out 'Bo' both of us would come. So, it was one night at the Jazz Workshop in Boston, 1967, that he decided that I was to be Chicago Beau.

Memphis Slim was a great friend and mentor. He was a tremendous help in my younger days. He had my back...looked after me like a son.

I first met Frank Zappa while The Mothers of Invention were performing at the Garrick Theater in New York around 1967, and later we collaborated with other artists as the closing act of Amougies Music Festival, Belgium, in 1969.

I had the good fortune to meet several Blues artists from generations before me. Some like Big Walter, Memphis Slim, and Victoria Spivey were good friends. I miss what was a great camaraderie between Blues people during the Great Migration era. The Black community was entirely different then, nothing like today. And in many ways, the Blues, and Jazz were the glue that held us together. I miss the role that the Blues had in the community. 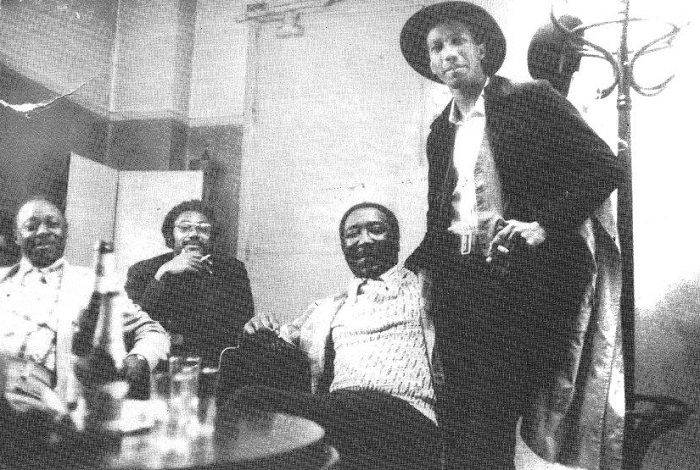 "Fear is like a dependency, a narcotic, the opposite of freedom; it has no place in my thinking. Learning from the past should equip one for dealing with the future" (Photo: Beau with Pinetop Perkins , Muddy Waters, Julio Finn, Salle Pleyel, Paris, 1971)

I'm an optimist. Fear is like a dependency, a narcotic, the opposite of freedom; it has no place in my thinking. Learning from the past should equip one for dealing with the future.

Money. I would like to see royalties paid to Blues and Jazz families; and the economic playing field for all Blues / Jazz artists to be level. That's more than one thing, but you know what I mean?

What are the lines that connect the Gospel and Folk with the Jazz and continue to Soul and Blues?

Well, there have been volumes written about Black Music history. My version would also be lengthy. But we all know the story, generally.

Two places come to mind: The earth before time began, so that I could experience the earth or more before humans evolved, arrived, were created, or however we got here; and spend 24 hours in a luxurious brothel in Paris around 1935, so I could drink champagne, write poetry, play music, and engage in acts with women of varying hues that may be considered by many to be 'indecent.' I'll need at least two days. 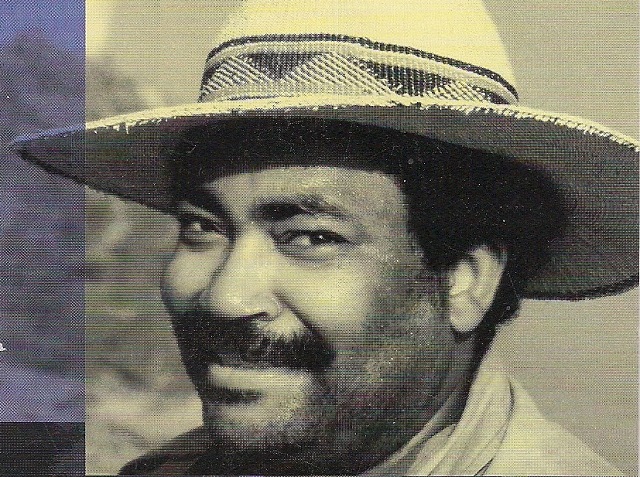