"I think the important thing in the blues is the feeling, the honesty and the passion in the performance, and those are qualities that I can recognize in the blues artists of these days."

Felipe Toro Mendoza, born in 1981 in the Mapocho Delta in Santiago City (Chile), is one the most important composer and performer of chilean blues-rock in the last 10 years, mainly because of the work with the band EL CRUCE but also because his talented voice and guitar playing. His first steps in music were like a self - taught guitarrist and singer, with the influences of the music that his father showed him, like Jimmi Hendrix, Led Zeppelin, Janis Joplin, Chuck Berry and Buddy Guy, an also he like to mention very important chilean musicians like Victor Jara, Aguaturbia, Violeta Parra and Tumulto. 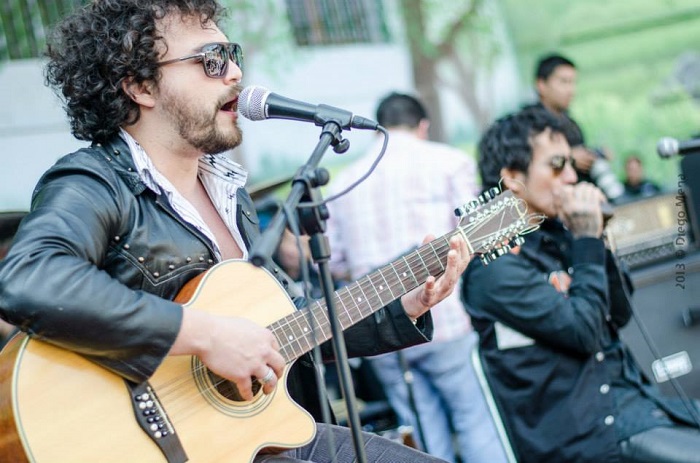 "I think the blues scene in Latin America it’s pretty much the same in countries like Chile, Colombia, Ecuador, Argentina and Peru, maybe in Brazil it’s a little bit bigger and in the other countries I honestly don’t know."

He's also a psychologist from the Universidad de Santiago and now is in the middle of a master in Latinoamerican Musicology, while he is still writing music and recording the first record of his new band called SANGRE DE TORO (Bull's Blood). Felipe Toro talks about the blues, local scene Honeyboy Edwards, ZZ Top, and Bob Margolin.

It’s strange that I have felt an especial connection with blues and black music such as swing, soul or gospel since very little, even when I didn`t know the name of the artists or genres, only hearing from the radio I remember an unlike feeling in my whole body when those beautifully rusty voices and magnificent groove filled my room every morning. When I learned more seriously about the blues and its story I felt in love with the style and became a studious and a fan, because I think that the blues gave me an expression vehicle that allows me to communicate my feelings in a natural way, just flowing without too much thinking.

How do you describe Felipe Toro sound and songbook? What characterize your music philosophy?

My fundamental pillar as a songwriter and performer is honesty. Everything I sing has a message or feeling that I really feel or think. With the years I became more open minded about styles and sounds, but the content of the songs it’s non – negotiable for me. 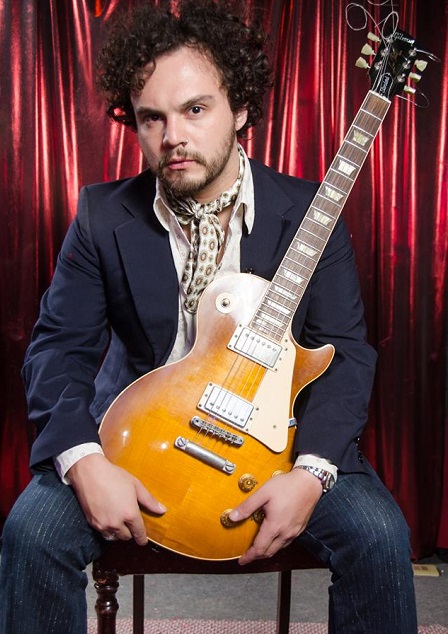 I think it’s because beyond the beauty of the music or the prodigy of the performers, there’s a whole mythology around the blues that makes it so interesting and fascinating. Also, the honesty that I mentioned before, that emotion that you receive when you hear the blues, it’s a very unique thing.

"I think it would be good for the future of the blues that the different blues festivals that exists in so many different countries share artists from all over the world so the blues public could know what is happening around the world ..."

I remember that when I started I was very young, about 16 or 17 years old, and very few people knew and played well the blues back in the days. So the only way to learn was through videos or amateur songbooks that were the only material that you could find. Then, some years later, an Argentinian band called Memphis la Blusera came to Santiago and we (I mean my band El Cruce) played with them. They were a very important band in Argentina and had about 20 years of history, so we looked up to them and was a very important moment for us. Was in that occasion that the singer, Adrian Otero, sharing some cups of Chilean wine with me gave on the advice that I remember most: I said “go and play what have a meaning for you; sing about your city, your streets, you friends and loves. Make it in your own language at your own way and don’t try to sound like the classics, because they are the classics. Sound like yourself, your own kind of blues, Chilean blues”. A few years later I met Honey Boy Edwards, the mythic Robert Johnson’s friend, and I asked him, do you think that a Chilean can make blues? And he told me “of course, if you feel it, you can play the blues no matter where are you from”. I think that was the final blessing for me.

Uff!! There are so many!! Well I have to mention my first 15,000 crowd concert, when I was 22 years old; it was very impressive for me and for the band. Also when we opened for ZZ Top in 2010 in the Santiago Arena, I remember that was an awesome concert too.  If you ask for festival we played in many of them in Argentina, Colombia, Brazil and made collaboration records with artist of those countries mainly. And about jam sessions, always the most memorable was with the legendary Muddy Waters’ guitarist, Bob Margolin, whom we made to play “cueca” the typical national dance of Chile.

What do you miss most nowadays from the blues of past? What are your hopes and fears for the future of?   Photo: Felipe & Honeyboy Edwards 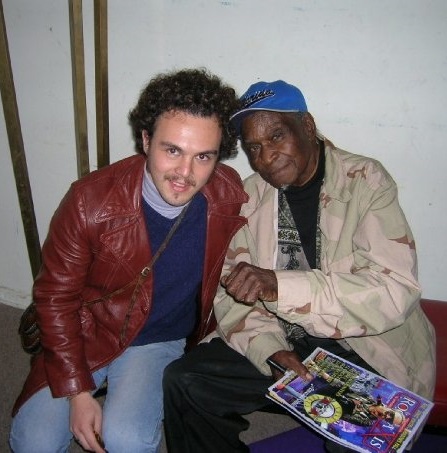 Because I don’t consider myself a purist of blues, I have no fears about its future and the changes and mixes that it could follow in the next years. Otherwise, I think it’s positive to understand that the blues of the past belong to a generation of cultists that are disappearing and, with them, that sound and style because they had a biography, a history, an experience that no one beside them could have ever again. And those personal histories became into music and performances that can’t be matched nor imitated. I think the important thing in the blues is the feeling, the honesty and the passion in the performance, and those are qualities that I can recognize in the blues artists of these days.

I think it would be good for the future of the blues that the different blues festivals that exists in so many different countries share artists from all over the world so the blues public could know what is happening around the world about the music we love.

The blues scene in Chile is really young; it doesn’t have more than 15 years as a scene. Before that, there was a few artists that played blues standards between jazz or rock repertories, but the first bands that made songs that were in blues key appear at the late 90’s and because of them other younger bands began to explore the genre. Those bands are mainly “La Banda del Capitán Corneta” at middle 90’s and “El Cruce” starting in 1999 where I made my career. We also have the 70’s psychedelic blues icon “Aguaturbia”, but they made most of their career out of Chile. "When I learned more seriously about the blues and its story I felt in love with the style and became a studious and a fan, because I think that the blues gave me an expression vehicle that allows me to communicate my feelings in a natural way, just flowing without too much thinking."

I have the impression that the first blues that was heard in Chile was British blues with bands like Led Zeppelin, Cream or Ten Years After and the 60’s American revival with Janis, Hendrix, The Doors and al that music that we know today as “classic rock”. For many years people heard blues without knowing it was blues; they associated and confused it with jazz or rock n’ roll and also it was considered like “slow music”, equated to power ballads from the 80’s that were played at the end of a party. Only at the end of the 90’s because of the bands that I mentioned before and the work of some radios that began to include Blues programs that went all through the week and made a very important educative labor. I have to mention Alfredo Lewin especially in this radio programming turn.

Today, in the globalization context, it really make me laugh the genre discussions that are centered in a purist and essentialist point of view, especially when the ones that fight about what is and what is not ‘Blues’ are South (Latin) American people. I think this controversy is no longer a thing that matters because Blues is not a traditional or folk music anymore and all over the world the music that it’s made these days has an hybrid nature that have transformed all the musical genres form their original forms. In my opinion, the music shouldn’t stay stuck to its originals forms because the world that we are living in today is all about mixes and hybridizations and we should learn to appreciate that, so that kind of discussions are meaningless to me.

In the other hand, a thing that had touched me lately is the recognition of my work in EL CRUCE from the younger musicians that are developing their own blues projects nowadays. It’s really meaningful to me to notice that we left a legacy that is important now in the popular music history of my country.

From the musical point of view what are the differences between Chilean & the others South American scenes? 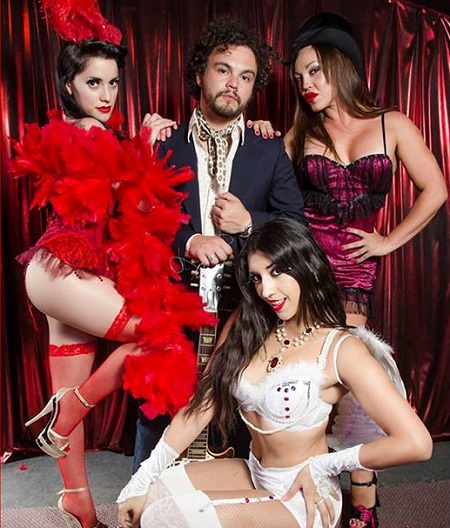 I think the blues scene in Latin America it’s pretty much the same in countries like Chile, Colombia, Ecuador, Argentina and Peru, maybe in Brazil it’s a little bit bigger and in the other countries I honestly don’t know. This is an underground scene based on bars and little theaters and musicians that they all know each other and share stages and gigs. There are some festivals two but they’re all in almost amateur level yet. The government has no participation or interest at all on this; all initiatives are from privates and particular people who are Blues fans mostly.

Without a doubt: Woodstock 1969. And not just one day, the three of them.