Interview with Dr. Maya Angelou, a muse who captivates audiences through the sheer beauty of her words

"My hope is that we develop enough courage to develop courage. To try to have, try to learn to treat each other fairly, with generosity and kindness. That’s my hope."

Dr. Maya Angelou: A Muse In Our Midst

Dr. Maya Angelou is one of the most renowned and influential voices of our time. Hailed as a global renaissance woman, Dr. Angelou is a celebrated poet, memoirist, novelist, educator, dramatist, producer, actress, historian, filmmaker, and civil rights activist.

Born on April 4th, 1928, in St. Louis, Missouri, Dr. Angelou was raised in St. Louis and Stamps, Arkansas. In Stamps, Dr. Angelou experienced the brutality of racial discrimination, but she also absorbed the unshakable faith and values of traditional African-American family, community, and culture. In 1954 and 1955, Dr. Angelou toured Europe with a production of the opera Porgy and Bess. She studied modern dance with Martha Graham, danced with Alvin Ailey on television variety shows and, in 1957, recorded her first album, Calypso Lady. In 1958, she moved to New York, where she joined the Harlem Writers Guild, acted in the historic Off-Broadway production of Jean Genet's The Blacks and wrote and performed Cabaret for Freedom.

In 1960, Dr. Angelou moved to Africa. While in Ghana, she met with Malcolm X and, in 1964, returned to America to help him build his new Organization of African American Unity. Soon after X's assassination, Dr. Martin Luther King, Jr. asked Dr. Angelou to serve as Northern Coordinator for the Southern Christian Leadership Conference. With the guidance of her friend, the novelist James Baldwin, she began work on the book that would become I Know Why the Caged Bird Sings (1970). The list of her published verse, non-fiction, and fiction now includes more than 30 bestselling titles.

A trailblazer in film and television, Dr. Angelou wrote the screenplay and composed the score for the 1972 film Georgia, Georgia. Her script, the first by an African American woman ever to be filmed, was nominated for a Pulitzer Prize. Dr. Angelou’s words and actions continue to stir our souls, energize our bodies, liberate our minds, and heal our hearts.

Have you ever visited Greece?

Dr. Angelou: of course years ago I was with an African company and stayed in Athens. And I married a Greek.

I would like to start with the book “I Know Why Cage Birds Sings”. Why do people write poetry and play music? 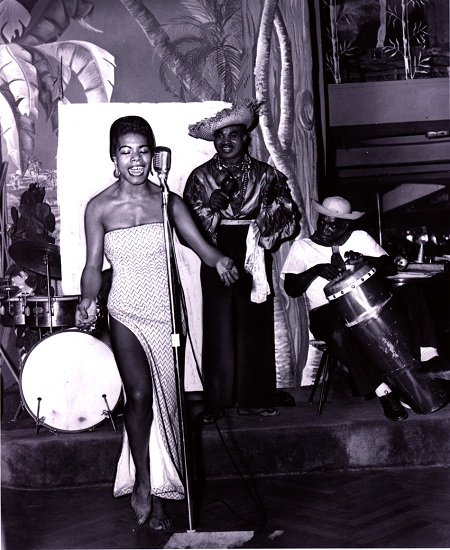 How would you characterize the philosophy of Dr. Maya Angelou?

I look at a glass; a negative person sees the glass and says: too bad it’s half empty...

I look at the same glass and say: Hallelujah!! It’s half full!!! You see?

What do you believe the people need a hope, a miracle or race and activity?

Dr. Angelou: I believe that people want the scent of love, more than anything else. And I don’t mean sentimentality, I don’t mean mush. I mean that idea, that human beings are more alike than we are different. And that means that I can love you. I don’t mean support you in bad things you do, that I can understand because you’re a human being. If you were an elephant or a tiger or a fly I might not understand you. But if you’re human being I can understand you. And that means to support you in the good thing you want to do in your life.

What is your hope and fear for the future of the world?

Dr. Angelou: I hope that we human beings develop courage. Courage is the most important of all the virtues. Because without courage you cannot practice any other virtues consistently. You can’t be consistently kind or generous or forgiving without courage. You can be anything irradicly.

My hope is that we develop enough courage to develop courage. To try to have, try to learn to treat each other fairly, with generosity and kindness. That’s my hope.

Poetry and music can these two arts confront the prison (shackles) of the human spirit and mind?

Dr. Angelou: Poetry and music are the best at the highest level of the human mind. Out of poetry, out of their need for poetry, human beings have developed the idea of God. And so when we sing, when we dance, when we speak poetry we are speaking out of God’s mouth, each other out of the music from God’s heart. "I hope that we human beings develop courage. Courage is the most important of all the virtues. Because without courage you cannot practice any other virtues consistently. You can’t be consistently kind or generous or forgiving without courage. You can be anything irradicly."

Dr. Angelou: Yes! they can always change. We can be better, we can be wiser, we can be more kind. Yes we have to change. We have to grow up and stop acting like 10 years old. Yes there is much to do, much to see, much to go into. One of these days, if we live long enough, we may even get over war. I imagine a time when somebody will mention the word war and everyone in the room will start to laugh. And what do you mean war? You mean I’m supposed to go kill somebody just because he disagrees with me?

What is the best advice ever given to you and what is your advice to the new generation?

Dr. Angelou: My grandmother gave me the best advice. She told me: sista, she called me sista, she said when you learn, teach. And when you get give. She said that will take you all over the world. And I found that it does so.

…and what advise will you give to the new generation?

Dr. Angelou: Well human beings are more alike than we are different. All of that. When we’re sad laugh when we are tickled. We want some good food to eat when we’re hungry. We want someone to love us. And we want to have the nerve, the courage to love someone in return. No matter if we are in Switzerland, in Greece, if we are black, white, Greeks, Asians, Japanese we want all the same thing. 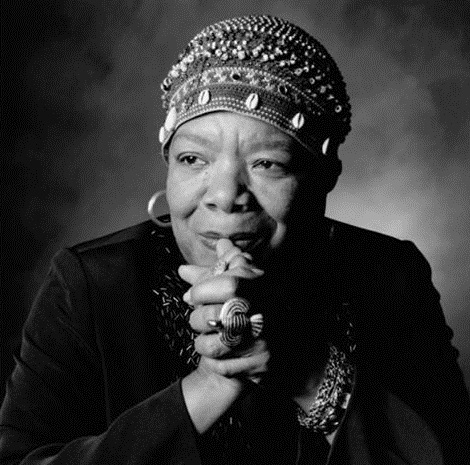 Dr. Angelou: You sing a true song in your heart. That is the song that you want, you don’t want cruelty, that cripples people, it doesn’t do any good. It’s like cancer. It eats upon the host. And out of greed it will eat itself to death. So you don’t want cruelty. You want kindness. And so you sing that song, continue to tell the truth as you understand it. And when you know better, you do better.

Let’s talk about music. Some music styles can be fads but the blues and jazz are always with us. Why do think that is?

Dr. Angelou: Well because it speaks again out of the heart of the human being. In our kind of music there is song: “Ένα βράδυ που ‘βρεχε, που ‘βρεχε μονότονα”. (translation: "one night that was raining, raining monotonously..." by Yiannis Gounaris) Beautiful song. I’m standing in the rain, I’m lonely. It’s the same in English in Chicago, in Spanish in Mexico City. People understand it. I think that what we have to do all time is try to tell the truth. Not the facts. Data can obscure the truth. You can tell so many reasons why, people who, times when, places where and never get to the human truth, so all that you want to do is tell the truth. And then they can be denied.

What's the legacy of Blues in the culture todays?

Dr. Angelou: Well I noticed that again it’s back to the truth. The legacy is that truth will never die. It’s the air we breathe. It is here and cannot be denied.

In your opinion what was the reasons that made 50s and 60s the center of political and social contests?

Dr. Angelou: There is a time for everything. There has been enough discrimination and racism in the U.S.A. Reverend Martin Luther King came at the right time. And so did Malcolm X at the right time. And the Rev. King caught the imagination of fight America. And that made people look at themselves and say: We are not different species. Wait a minute what am I doing? And so there is a time for everything and everything in each time and each place. I think that in 50s and 60s the music has changed people. It started in 20s but the music’s changing people and it continued in the 30s and 40s. And by the 50s Be-Bop and Jazz to Blues, the Spiritual and the Gospel songs. All of them gave people a chance to see themselves that they are more alike than different. 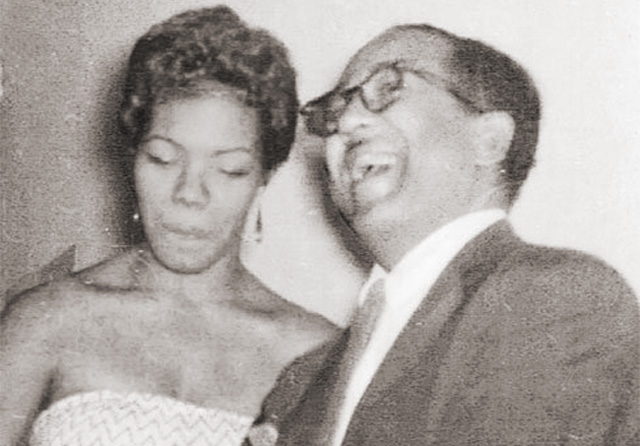 What is the line that connects the legacy of The Harlem Renaissance (of Langston Hughes), later the Beat generation (of Leroi Jones, Bob Kaufman) and beyond?

What do you miss the most nowadays from the past, from the 50s and 60s?

Dr. Angelou: I don’t miss anything. I had it all. In my head in my heart. I’m here because of it and I’m grateful for it. I don’t miss anything.  OK one of the things, while I’m getting older, I miss one damn thing a lot: that is that I love to dance.  And now my bones ask me “what do you think you’re doing”. I really love being this age. I love being in my time. I love being a writer and having a chance to talk to you in Athens, Greece.  It’s a great pleasure.

Dr. Angelou, you are one of my first people inspirations of my life.

Alex Haley's “Roots” (1977) it’s a point for me. It changed all my life, because I started to look to Afro American culture, to Jazz and Blues music, your books…

Dr. Angelou: I’m glad, Thank you for that; “Ευχαριστώ” (Thank you)

Really, what is happiness for you? 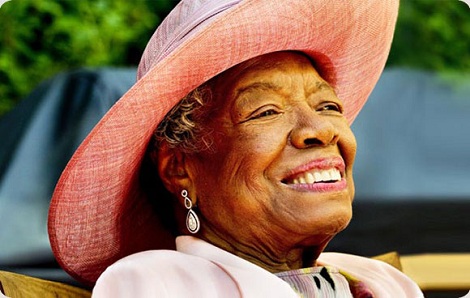 You have come to know great personalities. Which meetings where the most important for you?

Dr. Angelou: Oh no. I can’t say that because each one prepared me for the next one. You see? If I hadn’t had the last one in my head, I wouldn’t be ready for the next one. So each one of them is important.  They are all steps on the highway to nirvana. To learning something. I think the more we know the better we are. I mean not just facts. The more we know about each other, the closer we are to learn something about our selves.