"The Blues to me is the best way to express my feeling about things in life like Love, Anger, Happiness etc."

Tommy Schneller: Cream of the Crop

The singer and sax player Tommy Schneller and his Band, is known for a great mix of funky grooves, soul, and R’n’B. Tommy Schneller has won many awards. In 2012 he received the German Record Critics' Award for the album "Smiling for a reason" and in 2010, 2012 and 2014 he won the the German Blues Award. The band has also qualified for the International Blues Challenge in Memphis, Tennessee. 2015 Tommy is nominated for the German Blues Award again fort he best recording and best Band. In 2010 Schneller got an offer from ace German bluesrocker Henrik Freischlader's record label CABLE CAR RECORDS to make a new album. Since then Freischlader personally has produced 2 CDs with Schneller, „Smiling for a reason in 2011 and „Cream of the Crop“ 2014. The music gets people out of their chairs and onto the dancefloor faster than anything that the singer and saxophonist has done to date: here is funk, soul and R’n’B of the highest quality. Schneller brings this exciting collection of grooves to the stage with a highclass band, for a performance that is not to be missed. 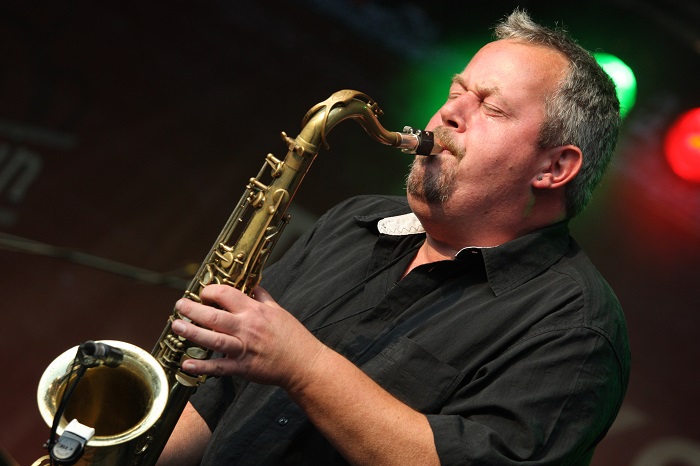 The band supporting TOMMY SCHNELLER (sax and vocals) is made up of passionate musicians who are masters of their instruments, and represent between them decades of music-business experience. JENS FILSER (guitar and vocals) is the epitome of the guitar freak's fantasies, as he has demonstrated in his years of work with Annie Haigis, Rob Strong, Mighty Flea Conners, Jeff Healey, Birth Control and many others. GREGORY BARRETT (organ/piano/vocals) will be remembered by German fans as the longtime keyboardist and frontman of Supercharge. At home in the USA he has worked with many major stars including Johnny Cash, Willie Nelson, Tracy Nelson, Emmylou Harris, Carl Perkins, Allman Bros. founder Dickey Betts, Chuck Berry and Tinsley Ellis. The exceptional GARY WINTERS (trumpet/flugelhorn) is a shoo-in for the label "world-class musician"--he is a regular in the bands of Fred Wesley and Bootsy Collins and has accompanied a slew of international stars in his still-young career. DIETER KUHLMANN (trombone/sax) has been Tommy's musical collaborator for more than ten years, and occupies the swing-seat with two instruments in the new line-up. MAIK REISHAUS (bass/vocals) and BERNHARD WEICHINGER (drums) make up the band's rhythm section; Weichinger has worked with Candy and Hans Dulfer among many others.

The Blues to me is the best way to express my feeling about things in life like Love, Anger, Happiness etc. It doesn’t have to be a classic 12 bar blues or a shuffle. Blues is the root to everything I play. It can be slow, it can be uptempo, funky or rock orientated it is always the blues that makes you feel the music.

How do you describe Tommy Schneller sound and songbook? What characterize your music philosophy? 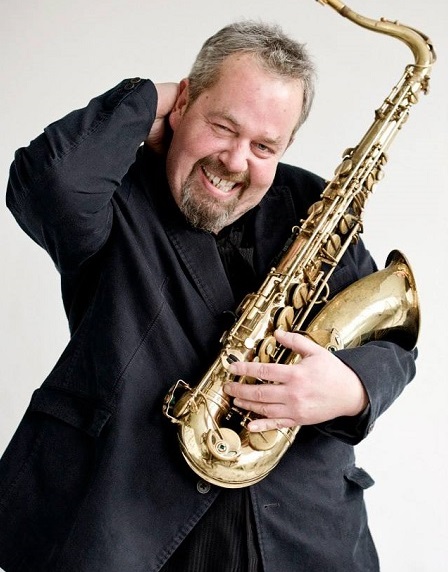 Like I said before the root is the blues but I love al kind of music and I’m not a purist. In my music you find influences by a lot of styles and artists without trying to sound like somebody else. Also my music is focused on guitar and Horn section. I’m a big fan of using the Horns as a powerful tool like a screaming guitar. It hits you right in the face.

"I would love to go to Berlin of the 20ths and enjoy the crazy scene of that time."

Cause its music from the heart! Everybody can identify with it and find himself in one ore the other tune. Even if you don’t understand the language you can feel what it is all about.

There are a lot of stories from the road. Once I played a gig in south Germany with Johnny Heartsman and we had Big John Evans on drums. He was a fantastic drummer. That was a fun tour especially because of Big John. He was really big and had a big smile on his face all the time. In front of the hotel people where selling watermelons. As soon as we arrived John bought one and a half watermelons, sat down on the steps of the hotel and started eating. I went to my room and when I got back about 10 minutes later John had probably 10 nice looking Teeny girls around him and they where flirting with him like crazy. He was talking to them and in between he was spiting out the seeds of the watermelon like a machine gun. I will never forget that picture.

One of the most important experiences was working with Henrik Freischlader! I have learned a lot by playing with him and having him as my producer on the last 2 albums. Another great experience was being the road-manager for Red Holloway in the mid 90s. I was in my early 20ths and drove the van for these super great musicians. I had to make sure we were on time, had to take care of the accounting, sell CDs etc.!  (Photo: Tommy & Red Holloway) 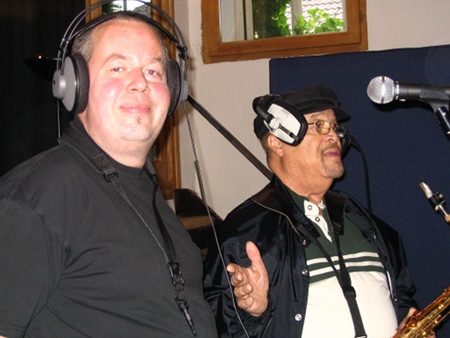 The band was: Red Holloway on Sax, Buster Cooper on Trombone (he had worked with Duke Ellington and Lionel Hampton for years), Dwight Dickerson on Piano (in that time Dwight was teaching piano at the University of Los Angeles and New York), Richard Reed on bass (he was the bassist for Aretha Franklin back then) and Paul Humphrey on drums (he has played and recorded with Santana, Sammy Davis Jr, Steely Dan, Albert King etc). Every night Red called me up on stage to play 2 blues tunes and these guys made me look great. If you have the chance to play with people from that caliber you learn a lot about being on stage. Needless to say that these guys where great!

For me being a musician the best advice was given by the late great Luther Allison! I met him a couple of times just backstage and he didn’t tell me this personal but he had it written on his T-Shirts and Tourjackest: Leave Your Ego, Play the Music, Love the People That is the route to become a happy person. A happy person on stage will be in your ear and in your heart right away.

I don’t know what to miss from the past cause I wasn’t there but I guess it would be the fact of being able to play 6 days a week. My hope is that the younger people come back to real live music and leave all that house and techno stuff behind. My fear is that they don’t!

Which memory from Sydney Youngblood makes you smile?

Sydney Youngblood is always on time but he shows up like 2 minutes before you go on stage and everybody gets really nervous and there is tension. Then he shows up and smiles and everything and everybody is cool. He’s just that kinda guy. Thinking about it makes me smile. 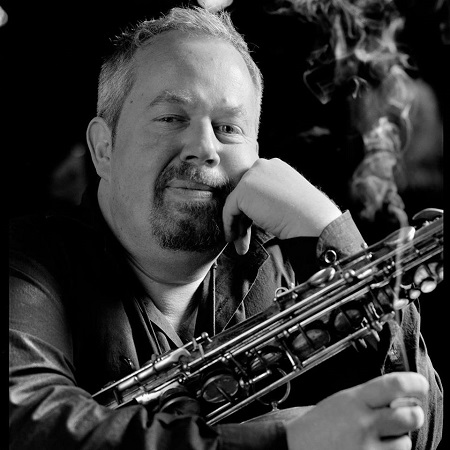 That’s a hard question! I would like to see blues and blues related music getting more space, respect and support from the media. There is so much good stuff out there that a lot of people will never get to know and that’s a shame.

I don’t know what period but in my home town Osnabrueck we have a great blues session every Monday since 1986. It’s really interesting to see how many great German Blues musicians came out of that session. People like Kai Strauss, Jimmy Reiter, Olli Gee and myself grew on that session.

In a way it started all with the “American Folk Blues Festival” in the late 60ths by Lippmann and Rau. Also Chris Barber is kinda responsible when he brought Muddy Waters over to Europe. The American soldiers also did their part on spreading Jazz and Blues in Germany after the war.

I would love to go to Berlin of the 20ths and enjoy the crazy scene of that time. 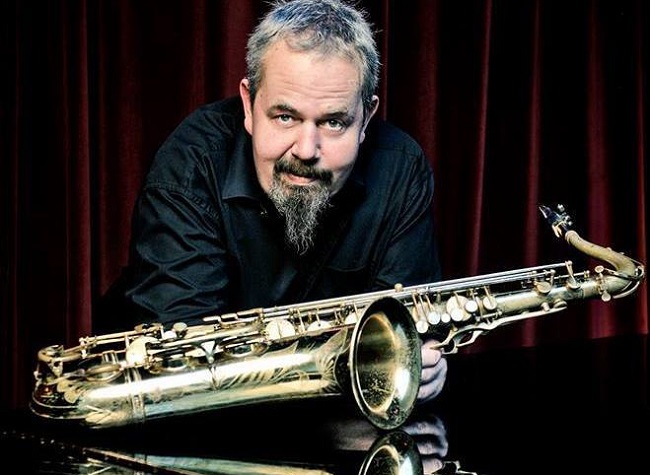