Interview with Greek band of ZOOLIXO LIGO ('to squeeze a bit'!) - an underground avant/jazz rock band

"Naturally (as rock culture has to be) satire is a subversized kind of thing. Their coexistence is obvious."

Zoolixo Ligo: Rockin with the Reality

The rock version of black humor. ZOOLIXO LIGO (loosely translated as: "to squeeze a bit"!) is an avant/jazz rock band from Athens, Greece, formed by Giorgos Makris (vocals, guitar) in 1990. A band that has generally remained on the underground scene, ZOOLIXO LIGO released their only, and self-titled, album to date in 1998 with Vagelis Peppas on bass, Kostas Peroglou on drums, Leonidas Georgoulis on guitars, Timos Chatziioannou on keys and the help of session musicians. Their characteristic sound is based on satire and irony, and a fusion of jazz-rock with art rock and a strong ZAPPA-esque feeling that places them firmly on the RIO/avant movement.

Makris: We are trying not to be so ugly as reality is and if possible to give a chance for recreation that shows how ugliness can have a nice art face. So we are sponsored by ugliness.

Haramis: Reality, that’s what ‘’Zoolixo Ligo’’ stands for, but with a little bit of craziness. Strong lyrics and powerful music with odd meters. As a philosophy we use ourselves to satirize reality and everyday things or persons.

Makris: Decadence is awful not only when it sneaks into your pocket. This is my general motto, trying to prevent the worst. 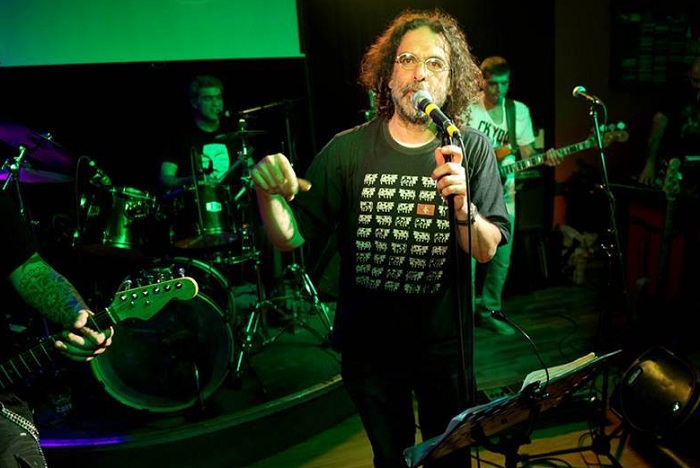 "We are trying not to be so ugly as reality is and if possible to give a chance for recreation that shows how ugliness can have a nice art face. So we are sponsored by ugliness." (Photo by Andreas Damanakis: Zoolixo Ligo at Lazy Club, Athens 2013)

Haramis: I am leaving the others to answer that question. And that’s because when I am on stage I create my own small world. There is no room for anyone else it’s just music, my bass and me (these are the three secrets). There you are, I just answered.

Makris: I cannot speak about satire generally in music without mentioning the great appearance of Spike Jones. He is the main influence for satire in rock culture. From Spike Jones innocence till the complicated agony of Frank Zappa satire is an element for a great music landscape. Naturally (as rock culture has to be) satire is a subversized kind of thing. Their coexistence is obvious. I don’t see it in the music scene today maybe because I am not well informed.

Dascalakis: Rock music has a direct more primitive in a way impact on people, because of its sincere energy.

Haramis: I think it’s the energy and adrenaline that Rock music gives to people, whether you are a musician or just a listener.

Makris: Playing in a gig the same song several times till the audience sings along with us. They never did it and we will try again.

Dascalakis: Some live moments where the audience participation made it part of the performance.

Haramis: Once, about 10 years ago I had an accident, I hurt my right leg. At that time I was at a studio recording the musical ‘’Victor Victoria’’. There was no way to stay at home and get some rest. So I had to go to the studio and put my leg over a chair so that the blood wouldn’t down to it and get swollen. I recorded for about 8 hours in that position. 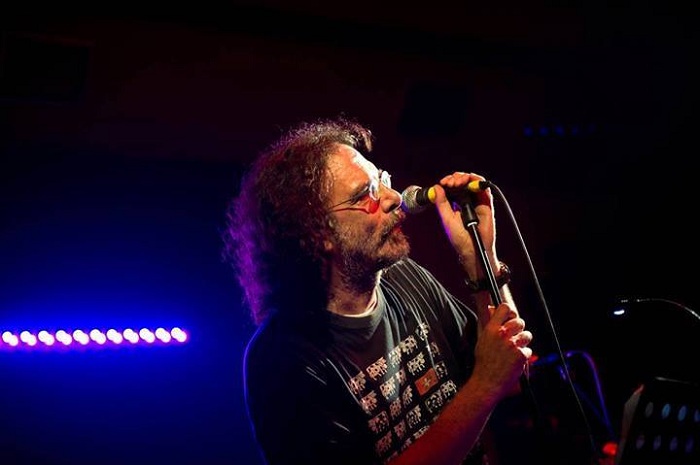 Makris: The rock scene in Greece has very few shining examples and many unknown people. It’s a pretense for something else. It seems to be like a big mistake so I cannot detect one mistake from the other.

Dascalakis: There are a lot of great bands and musicians in Greece. One mistake that happens, which I think applies to all bands in a more universal way is lack of stamina and consistency to their presence which often makes motivation run low, eventually leading to a band break-up.

Haramis: Here in Greece we have a lot of good things going on, great musicians, with a lot of modern ideas. The problem is that most of the musicians are trying to ‘’copy’’ foreign musicians. We must believe more in ourselves and what are we capable of. Every musician has a unique personality and that’s exactly what we should do. Give the best of ourselves, the best of our soul.

How difficult is to make a rock album in local language with international success?

Makris: It’s impossible. Except if you speak Fluent English or you don’t speak at all (instrumentally).

Dascalakis: Not sure. I think quite difficult since rock music is so strongly connected to English language. Still, a well thought combination of text and music could work effectively. Of course, people wouldn’t understand what the text is about which could be a problem (except if the lyrics suck!). 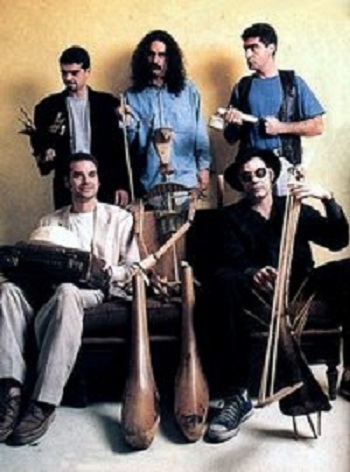 Dascalakis: I miss the decade of 70’s where experimentation had its own space and music was less “produced” leaving more room to the musicians. I don’t have any hopes or fears for the future, I only hope simplicity and real instruments will win.

Haramis: What I really miss is the originality in music. Musicians in our days (not everyone) had become more constructors like. We take a chord, a melody we put one more chord and that’s it. Music in now days seems to have lost its purpose which is to offer a higher emotion than any other kind of art. It can make you laugh or cry at the same time with no specific reason, just by hearing music. But there will always be those people that will put music back to where it belongs.

Makris: For sure the thing that emotionally touched me lately cannot make me laugh at all.

Makris: Except from the horizontal memories of blues everywhere in music, I am thinking about abstract connections from running paint lines between music genres even abolishing the very strict perpendicular lines of beyond jazz.

Dascalakis: To me, these are quite different styles, some closer to each other (Rock has a strong base on blues while jazz is influenced by blues as well), with common elements but a different approach. The rhythm feel is a strong element that connects all music I guess.

Haramis: I believe in music, the line that connects all the styles is the humanity itself. Music is a global language, it’s an art that everyone can understand and feel. The same thing happens when it comes to musicians. It does not matter which style are you in, as long as you perform it by your soul. Music, from every style, must come from our soul and return there. Soul is the homeland of music. 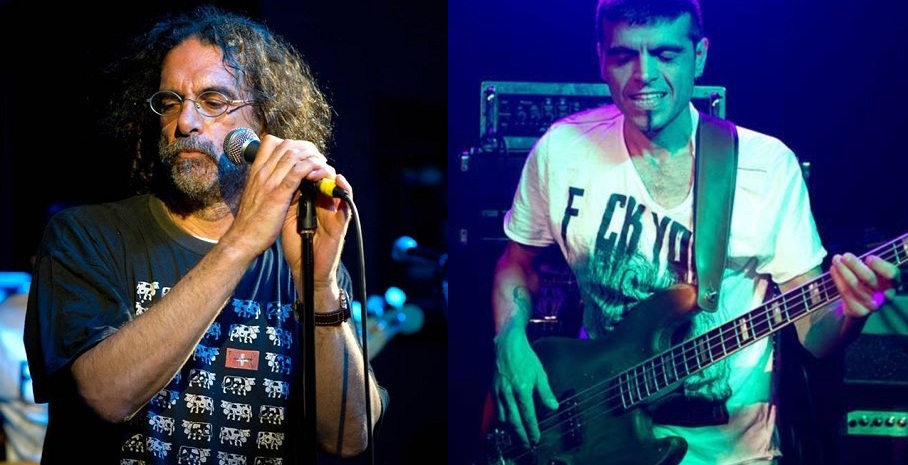 "What I really miss is the originality in music. Musicians in our days (not everyone) had become more constructors like. We take a chord, a melody we put one more chord and that’s it. Music in now days seems to have lost its purpose which is to offer a higher emotion than any other kind of art." (Photos by Andreas Damanakis: Giorgos Makris and Panagiotis Haramis at Lazy Club)

Dascalakis: For me, blues is a very strong foundation for the development of improvisation; phrasing and expression. A blues player thinks in sentences and paragraphs, the same way a jazz player does.

Dascalakis: One of the Village Vanguard’s Coltrane concerts.

Haramis: If I had that opportunity I would surely try it out. I would really like to live somewhere back in time with clean air, no pollution, no war, with no things that humans created to harm the planet and each other. If someone knows a place in time like this please let me know. I am willing to go there.

What would you ask Frank Zappa? How you would spend a day with Monty Python’s family?

Makris: I would ask Frank Zappa to forgive me for being such a bad student. As for spending one day with Monty Pythons we better ask them first if they want to. 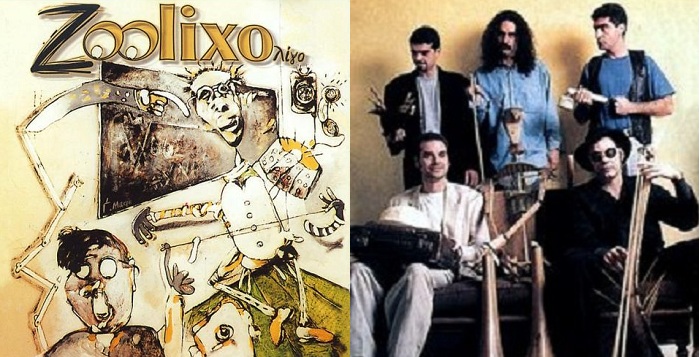