"We're in the days of auto tune and digital musicians have left a void between the music and the audience. The human factor has been almost entirely removed from the songs."

Nick and the Blues Sister is a fresh musical group consisting of two Greek musicians in conjunction with a charismatic new female singer with Italian origin. Sabrina Matola was born in Greece in 1993 and is an experienced dynamic vocalist/performer. Her unique Soul - Jazz voice and her presence can easily hold an audience. Known abroad as ''The Spiritual Voice'' of Tyler, growing and learning alongside big names of Spiritual & Gospel music. On collaborations including David Peaston, Loleatta Holloway, Bob Carlisle, Robert Timothy West and others. 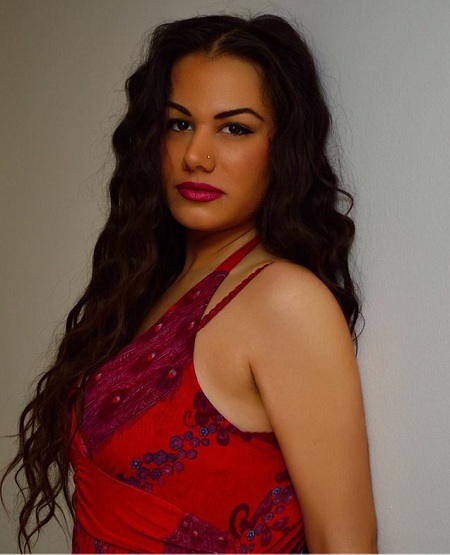 Sabrina Matola is an singer in worldclass! A variety of songs from Soul-Motown-Disco, Jazz, Pop, etc. her  musical influences are: Aretha Franklin, Etta James, Ella Fitzgerald, Diana Krall, Nina Simone, Patti LaBelle, Whitney Houston, Jill Scott. Played in live music venues and touring with bands, from as early as 12 years old! Sabrina takes the stage with confidence and can easily hold a big crowd with her strong vocals.

Nick and the Blues Sister are: Sabrina on vocals, Nick Dounoussis on guitar, a founding member of the Blues Wire and Nick & the Backbone. Nick considered one of the best blues - rock guitarists in Europe with significant local and international collaborations as Nick Gravenites, Big Time Sarah and others. Also, Dimitiris Yialamas, one of the most experienced and most talented bassists of Greece with studies in Greece and abroad (Boston's Berklee College of Music) and numerous appearances in important contemporary music groups. He was a member and partner of Kumina, Chico Freeman, Nick & the Backbone, and Olympians. Their music includes a wide range starting from the gospel, swing, jazz, blues, Motown, ragtime and reaches modern pop, rock & roll, Latin scene, all filtered through their own personal way of expression.                                             Photo by Christo Pap

I’m still learning… but generally I’ve learned that the blues is something you have to be able to recognize and feel the music. In all you have been in the situation then you can feel the music. I grew up with the blues and my style is deep rooted in the blues, both vocally and musically. My father bought me a piano and many blues/jazz records when I was 5 years old and that was an incentive to me to start discovering music from an early age. When I first heard the blues felt a tremendous admiration in me without knowing the history, intrigued me from the first moment. I just wanted to follow it. That just stuck with me and prevailed over other things I planned to do with my life. To me music generally is a way to share emotions from performer to audience using the ensemble more than just the words. I feel that music has helped shape the person I am today and affected the way I think, the way I feel, the way I behave  and generally who I am. It makes me feel free...

What do you describe and what characterize Sabrina Matola music philosophy and voice? "Women are being exploited every day in this world. Even though this has been around for centuries this epidemic has grown tremendously throughout the years." (Photo by David Marxon)

What did you think that the Jazz, Soul and Blues music continues to generate such a devoted following?

Everything has been played today; that you hear on the radio, on the TV, films etc., everything you listen to has involved from blues and jazz music, even rock n roll, even Gospel… and is being going generation to generation.

What are the most memorable gigs you've had, which memory makes you smile?

There are a number of things I look back on that were cool, some great gigs and jams. Every gig is unique to me; each time is special and makes me smile. I can't say one or two. All of them are memorable.

I miss the quality, the true musicians, who shared their charisma and passion with the crowd. B.B King is a great example because he continues the tradition until now. We're in the days of auto tune and digital musicians have left a void between the music and the audience. The human factor has been almost entirely removed from the songs.

As Willy Dixon said: "the blues are the roots and the other musics are the fruits. Without the roots, you have no fruits so it's better keeping the roots alive because it means better fruits from now on" that's the answer!

Make an account of the case of blues in Greece. Do you believe in the existence of real blues nowadays? The conditions in Greece do not help. Generally..

"You know what, I don't believe that you have to be African, American to play the blues and understand the culture. Doesn't matter if you are Japanese, Egyptian, Greek, blues is blues." (Sabrina Matola & Nick Dounoussis, Photo by Christo Pap)

You know, I feel lucky because I've met some great artists in my life and I've learned from them. Let's start from the most unexpected meeting in Greece, with the blues guitar player Nick Dounoussis. There was a great chemistry between us from the very first moment we played together, we found many common elements in our music and that was the reason we started collaboration (our band Nick & the Blues Sister and other projects). He helped me in many things in general, stood next to me as a friend, as a musician, even as a brother. I feel enormous appreciation for this man. I truly love him.

Another unforgettable meeting was with the Gospel singer David Peaston (R.I.P) it was a great honor to have met him and collaborated with him. As regards the advices, the best advice I ever got was from my brother. He said "never stop trying"

How is an italian to sings the Blues in Greece? What mistakes in local industry would you wish to correct?

You know what, I don't believe that you have to be African, American to play the blues and understand the culture. Doesn't matter if you are Japanese, Egyptian, Greek, blues is blues. Blues musicians come in all sizes. They are black and white, Greek and Italian. Most audiences cannot seem to tell the difference when they hear them play, but their desire for a so-called "authentic" experience often lends strength to more erroneous stereotypes of what blues musicians ought to look and sound like. Unfortunately the blues audience in Greece is not that big so you understand it's quite difficult to find venues to play this style and those few live music venues that can organize blues & jazz nights in Greece are closing.

Are there any memories from your experience in local Blues scene which you'd like to share with us? Had a very good time with all the musicians I’ve collaborated in local venues until now.

"To me music generally is a way to share emotions from performer to audience using the ensemble more than just the words. I feel that music has helped shape the person I am today and affected the way I think, the way I feel, the way I behave  and generally who I am. It makes me feel free..."

What does to be a female artist in a "Man's World" as James Brown says? What is the status of women in Blues?

Women are being exploited every day in this world. Even though this has been around for centuries this epidemic has grown tremendously throughout the years. Media within our society constantly degrades women and sends out negative messages about the way in which women should be treated.

Let's take a trip with the time machine, so where and why would you really wanna go for a whole day?

I think I would go back to a moment in my life where I can actually do something and make a difference to what I have going on right now. And there are quite a few of those moments.