Interview with multi-talented artist Neil Harpe, introduced his lifetime’s passion for the blues into his art

"I feel a lot of the blues being played today is just as pertinent and authentic as anything one can hear on an old 78 RPM Okeh or Paramount disc."

Neil Harpe is a painter and printmaker. He approaches his work through a variety of media including acrylics, watercolor, Mylar lithography and intaglio printmaking (etching) – often combining several of these media in a single work. In 1995, Harpe introduced his lifetime’s passion of the blues and of guitars into his art. He painted a series of portraits of famous blues musicians: Blind Boy Fuller, Lonnie Johnson, Memphis Minnie, Blind Lemon Jefferson and more. Harpe's passion for the blues began at a young age. He learned to play the guitar when he was 12 and inspired by Elvis began as a rock & roller. By the time Neil was in high school, he had discovered the blues! At  the age of 17 he perused the  Goodwill store every week looking  through piles of old 78's, hoping to uncover an old blues record from the 1920's or 30's. While his peers were listening to the Beatles, the Beach Boys and the Rolling Stones, Neil was listening to the blues musicians: Blind Boy Fuller, Lonnie Johnson, Memphis Minnie and Mississippi John Hurt.

Harpe has amassed a sizeable collection of “Stella” guitars and has written a book about them. Made between 1900 and 1939, they were the guitars of choice for such blues performers as Charley Patton, Willie Brown and Lead Belly. He has a website devoted to buying, selling and purveying information about these instruments and in 2005 he published “the Stella Guitars Book.”

Parallel to his visual art career, the multi-talented artist has been an active performer all his adult life and is an accomplished guitarist, performing at many venues. He recorded an LP entitled "Neil Harpe", for Adelphi Records in 1972. Harpe recently released a solo CD of all new material. Along with longtime musical partners Rick Franklin and Rick Usilton, he has also released two albums of blues and "hokum" ragtime duets.

When was your first desire to become involved in the blues and what does the Blues means to you?

I got interested in the music when I was still in high school. I discovered it because folk music was so popular in the early 1960s. Country blues or “folk blues” as it was then being called, was simply an offshoot of American folk music. My first exposure to blues was through the music of Lead Belly and Sonny Terry & Brownie McGee. By the time I was a senior in high school, I was going through piles of old 78’s for sale at the local Goodwill Industries second hand store. I found dozens of records by artists such as Blind Boy Fuller, Memphis Minnie, Lonnie Johnson, etc.

It was a stroke of luck to be born and raised in Annapolis, Maryland. Around the time I was first beginning to discover the blues, there were several people who served as musical mentors living right in my home town, I was able to listen to Mike Stewart’s (AKA Backwards Sam Firk) fabulous and growing collection of 78s and watch his stunningly inspirational guitar playing. Tom Hoskins, who found Mississippi  John Hurt living down in Avalon, Mississippi, was a local. Max Ochs, John Fahey – these guys were world class country blues guitarists and I hung around with them! "I think the best advice was being told to play with bare fingers and quit using thumb and finger picks. The down side of this advice, of course, is being somewhat handicapped when I break a nail."

How do you describe Neil Harpe’s sound and what characterize your philosophy about the music and art?

I love the music that was recorded in the 1920s and ‘30s. The list of artists whose music I love is way too long for me to innumerate. I do not try to replicate the songs, but I think I do capture some of the energy and feeling of these artists. As for my visual art, I work on a lot of media: watercolor, graphite (pencil), acrylics, lithography, woodcuts and intaglio.

Which is the most interesting period in your life? Which was the best moment of your career?

I think right now is quite interesting to me.  That said, perhaps one of the best musical moments was when my wife, Alexandra Fotos (yes, she is Greek!) and I were visiting Mississippi John Hurt’s grandchildren in Avalon. Mary Frances Hurt-Wright took us over the Greenwood to meet John’s first wife, Gertrude. She was 107 years old at the time! But she was totally in control of her faculties! She sang some hymns and told us stories about living in Avalon back in the old days. It was fascinating. I played and sang several of John’s songs for her, after which she smiled and said, “John has returned! But he has changed his color!” The entire trip was unforgettable - pure magic!

In your opinion what was the reasons that made 60s to be the center of the artistic experiments?

Perhaps in the case of country blues, it was because of the research being done at the time. Enthusiasts digging for old 78s, or the sudden emergence of reissues by record companies like Biograph, Arhoolie and Nick Perls’ Yazoo label. And of course guys like John Fahey, Tom Hoskins, Mike Stewart, Gayle Dean Wardlow and others who actually located artists like Robert Wilkins, Son House, Skip James, Bukka White and Mississippi John Hurt. 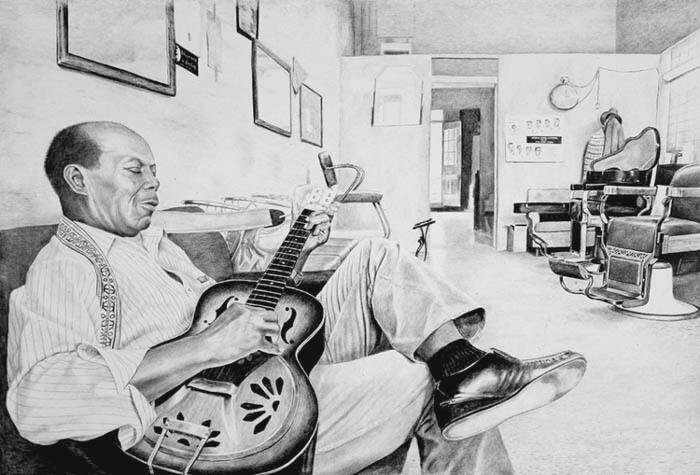 You had a project with portraits of bluesmen. Where did you get that idea?

What are the reasons to become Blind Boy Fuller, Lonnie Johnson, Memphis Minnie, etc. a legendary generation that left it mark through the years until now?

The way these artists played guitar seems to be one major hook that catches the fancy of generation after generation seeking to emulate them. Their approach offers a solo guitarist the opportunity to make a whole lot of music entirely alone and without the need of further accompaniment.

How important was the Blues culture in your life? How does affect your mood and inspiration?

I’m not sure about “blues culture” per se, but I love playing guitar and playing the blues and rags of the 1920s and 1930s. I have had many. One very memorable session that lasted a weekend was with Backwards Sam Firk, Delta X and Eleanor Ellis, down in Hendersonville, North Carolina at Delta’s house. And I played so many gigs I can’t begin to tell you. I shared the stage with some of the great blues performers, though. John Jackson, John Cephas, Flora Molton, Archie Edwards, to name but a few. I’ve had many duet gigs teamed up with Max Ochs,  Eleanor Ellis and Rick Franklin.

That said, the best moments for me are when I am on stage or in my own living room playing with my Daughter Erin Harpe, who is a remarkable singer and accomplished blues guitar player.

I think the best advice was being told to play with bare fingers and quit using thumb and finger picks. The down side of this advice, of course, is being somewhat handicapped when I break a nail.

I miss some of my friends who played the music and are no longer with us. John Jackson, Flora Molton, Archie Edwards, Mike Stewart, Tom Hoskins, John Fahey, John Cephas.

How has the music and art changed over the years?

There are a great many more really good players of country blues and rags nowadays. Same goes for visual artists.

Why did you think that the Stella guitars continues to generate such a devoted following? Stella guitars have a unique sound quality that many consider perfectly suited for the old country blues. Due to the way they are constructed, with lateral (ladder) bracing, they are loud and have a sort if “in your face” sound quality – a rough and ready paunchiness that can’t be had with x-braced guitars such as those made by Gibson or Martin.

Do you know why Stella guitars are connected to the Blues culture and what are the secrets of?

The answer is simple, at the time the classic blues recordings were being made in the 1920s-30s; a Stella guitar was the least expensive, loudest instrument that money could buy. Also, the Oscar Schmidt Company had a wide distribution network. So it was easy to find a dealer that sold Stella guitars. Music store were usually located only in big cities. Stellas were sold in furniture stores, dime stores, general stores, etc. - as well as in many music stores.

When we talk about the blues usually refer moments of the past. Apart from the old cats of blues, do you believe in the existence of real blues nowadays?

I feel a lot of the blues being played today is just as pertinent and authentic as anything one can hear on an old 78 RPM Okeh or Paramount disc.

As you know, my profession is that of a fine artist. I paint and draw all the time. But so far, I have not got around to making the painting you suggest. I shall ponder the premise.