"My hope is that people continue to keep their hearts and minds open and let the emotions pour out into something they love."

Josh Chambers: Confessions of an Artist

Josh Chambers is a 31 year old writer, artist, and musician who lives in New Hampshire with his wife and two sons. Josh is fairly new to painting and writing as he took a break from art while he served 9 years in the Marine Corps. Upon leaving the military, Josh has rediscovered himself and is embracing his creativity and expressing his thoughts on paper, whether by words or by paint. He’s been playing guitar, drums, and singing since he was 14. He started painting in high school, as well, but didn’t get back into that and writing until the last few months. 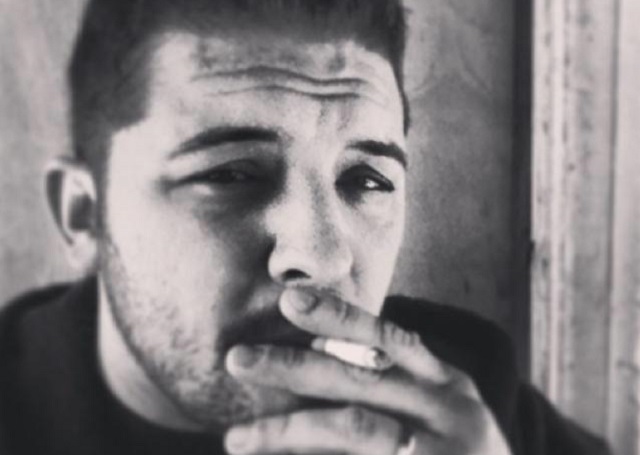 Josh has been working with GonzoToday since they began, writing stories and painting illustrations. He is heavily motivated in his art and writing by politics, social issues, and music. His Gonzo style in painting and writing allows him to express himself without the constraints of “normal” media.

I draw influences from all over the map. I’m pretty politically aware and so politics and social issues tend to get me riled up and that energy has to go somewhere. Sometimes I’ll paint it, sometimes I’ll write it as a story or poem, or other times I’ll write a song.  Sometimes I just sit down and paint whatever pops in my head though, too. I also do illustrations and so those have some kind of direction from how I visually interpret the story.

How would you characterize the philosophy of Josh Chambers’s artwork?

I guess just that anything goes. Don’t restrict yourself. I’m still learning. I’m new to painting after taking a long break. I’m still trying to find my style but drawing a lot of influence from artists that I like right now, too. It’s an evolution, I think.

I think it’s all related. I’ve always been a fan of Gonzo style writing and art. With music I’m a fan of everything. As long as it gives me some kind of feeling, I appreciate it. I tend to be influenced by whatever it is that I’m more into at the time. Right now I’ve been listening to a lot of Pink Floyd, Wilco, and Sturgill Simpson. I’m reading Better Than Sex: Confessions of a Political Junkie by Hunter S. Thompson. I think these definitely come through in my painting. 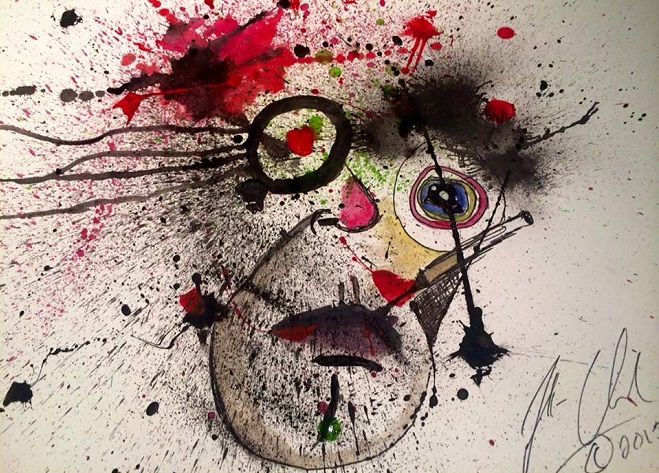 "My fear is that it will get pushed to the fringes of society instead of being celebrated. It seems that many schools in America these days are cutting music and art from their curriculum for reasons I mentioned before, I think. It’s sad, man." (Artwork  © by Josh Chambers)

I think his legacy is that of being a bad ass. Creating Gonzo journalism by immersing himself into the stories and events. Living life full throttle. Never being afraid to be weird. Seeking justice for all.

I don’t want to put words in any one’s mouth, I don’t know what he’d say. He’d probably just want to know that there is a new generation carrying the Gonzo torch deep into the 21st century. Trying to keep the pressure on the bastards of the world!

My hope is that people continue to keep their hearts and minds open and let the emotions pour out into something they love. Whatever the medium is. It feels like sometimes art is put in a corner because it’s not viewed as contributing to the machine. As long as people continue to rebel against the status quo and make cool shit, art will continue to be good. My fear is that it will get pushed to the fringes of society instead of being celebrated. It seems that many schools in America these days are cutting music and art from their curriculum for reasons I mentioned before, I think. It’s sad, man. We need to push children to appreciate art, music, and books. These are some of the best things in life. I think I miss passion, at least in music. It seems like record companies churn out more and more garbage these days and it’s hard to get the good passionate music to the masses. It seems to me that the mid 1990’s was when that started to take root. I’m not saying there isn’t amazing passionate music still being made, but it’s definitely fizzled a bit. I have to search out good music these days. 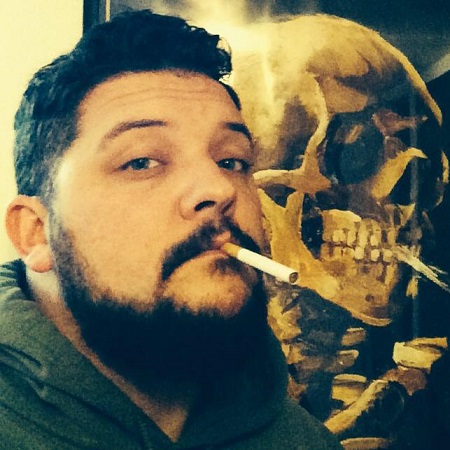 Probably meeting my wife, kids, family, and friends. They keep me going. I have great people surrounding me in my life that encourage me in everything I do. I love them all for it. I don’t really know about best advice. I like what the comedian Joe Rogan says often which is “Be the hero in your own story.” In other words, do what you think your hero-self would do in the story of your life.

Oh man. I’m always laughing. I couldn’t tell you anything in particular. I find humor in almost everything. I’m not really sure what you mean by “what touched me from the American Dream”? There isn’t much left of the American Dream anymore. I think that’s what keeps the gonzo style going, we are trying to call out injustices in order to bring America back to center instead of being so polarized. I try to show people on both sides of the aisle how ridiculous they sound when they go hard left or right.

That’s a tough question. Probably that everyone could put differences aside and work together to fix the big problems in the world. There are so many things, major problems, that we could solve and better our future and our children’s futures if we could just chill out and listen to each other.

What do you learn about yourself from the “Gonzo movement” and what does Counterculture mean to you?

I guess I’ve learned that I’m not alone in how I think. There are a lot of people out there that are like me. It was hard to see that growing up in mostly religious and conservative surroundings. It wasn’t until the last few years that I was able to find my voice and speak what I’ve thought for most of my life. It’s good. Counterculture, to me, is just being into things that don’t fit in with the “mainstream”. It means a lot to me in terms of being able to express yourself and questioning authority. 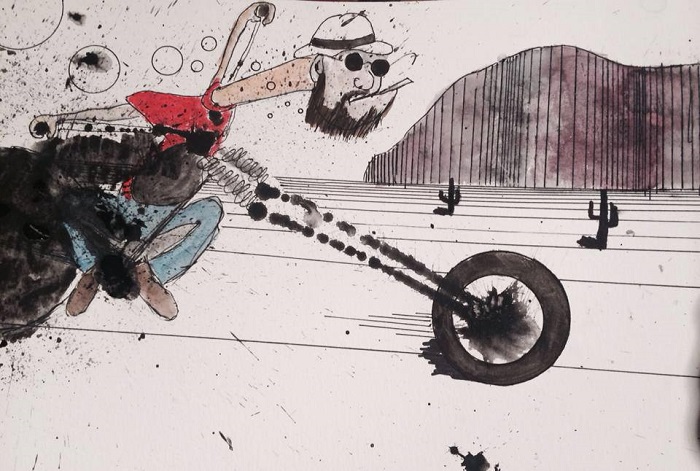 "I’m reading Better Than Sex: Confessions of a Political Junkie by Hunter S. Thompson. I think these definitely come through in my painting." (Artwork  © by Josh Chambers)

Man, first I’d probably go back to when all of the major religious figures of the world were alive and bring a camera. I’d film them all so maybe we could put all of this who-is-right-and-who-isn’t shit to rest. I’d probably swing by the 60’s and see what the energy was like during all of that turmoil and unrest. Then I’d probably go find myself before high school and give myself a few pointers!

What would you say to Pink Floyd?

What could I say to Floyd? Come back to Boston soon so I can see you at least one time in my life! And thanks for all of the amazing music!

Bob Marley, man, I don’t even know. I’d probably thank him, too for all of the great tunes and messages in his music. Who did shoot the deputy?

How you would spend a day with the Dude from The Big Lebowski?

Ha! Hmm, The Dude. I guess I’d have to go bowling with him and abide, mannn…!! 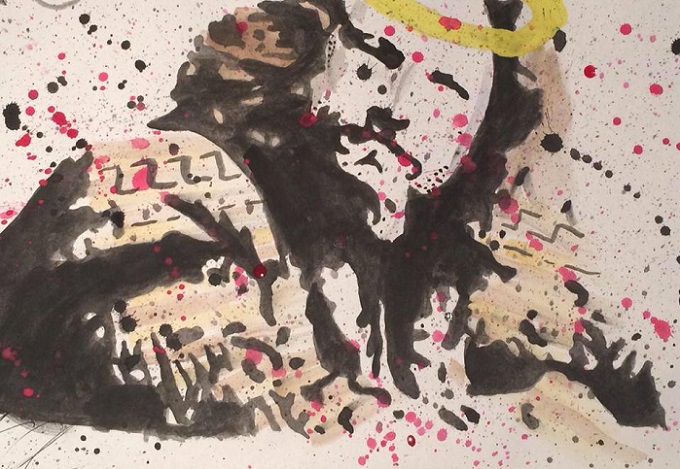 Artwork  © by Josh Chambers / The Dude, The Big Lebowski