"Blues is a timeless music (being the root of most modern genres), enjoyable by people of all ages. Due to this universal quality, I feel that the blues will always have some kind of following."

Justin “Boots” Gates is a 14 year old blues guitar and harmonica player, based in the Chicago area. At 6'4” and 130 pounds soaking wet, this suburban middle-class white kid doesn't strike you as a typical blues musician. But, since discovering the blues while taking a class at his local community college, he's embraced the genre and it's universality. He started studying blues guitar at the age of 8, and picked up the harmonica 2 years later. Since then, he's had the opportunity to play with some of the best musicians the blues has to offer. 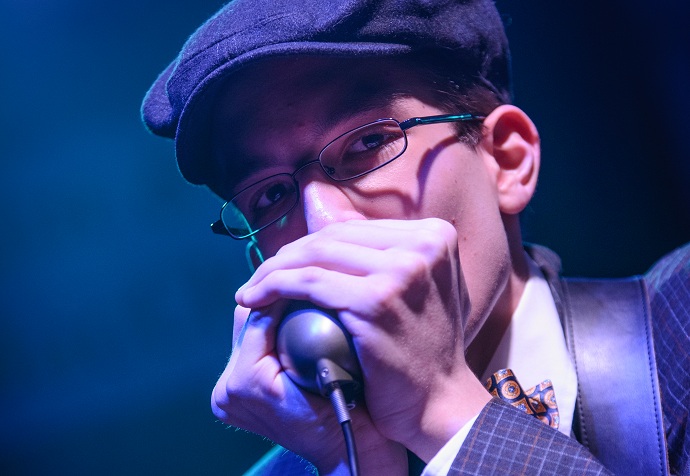 "I'd like creative melody and rhythms to replace the screaming guitars and bad melody hiding distortion and reverb that dominates the music scene today."

In 2013, he was a recipient of a William Rosebush Youth Scholarship from SPAH (Society for the Preservation and Advancement of Harmonica), and in 2014 he received a scholarship to attend the Pinetop Perkins Masterclass in Clarksdale, Mississippi and won the RAMI (Rockford Area Music Industry) Youth Charity Jam, a local youth music competition. He was christened “Boots” by the crowd while performing in Oxford, Mississippi during Hill Country Harmonica 2011, after donning a pair of large rubber boots to avoid the infamous red clay. The nickname stuck with him, and chants of “Boots!” can be regularly heard at gigs. Justin can be seen performing his one-man traveling blues show (a mixture of old-time blues and new-school technology), as well as appearing as a guest musician with bands and artists both regional and touring.

When was your first desire to become involved with the music and special with the Blues?

I first fell in love with the blues at the age of 8, when I took a class at my local community college called “Kids Can Play Blues”. It was taught by Wheatbread Johnson, one of the great unsung heroes of the blues in my opinion, who became my teacher, mentor, and friend. Ever since then, the blues has been a major passion of mine.

How has the music changed your life? In what age did you play your first gig and how was it like? 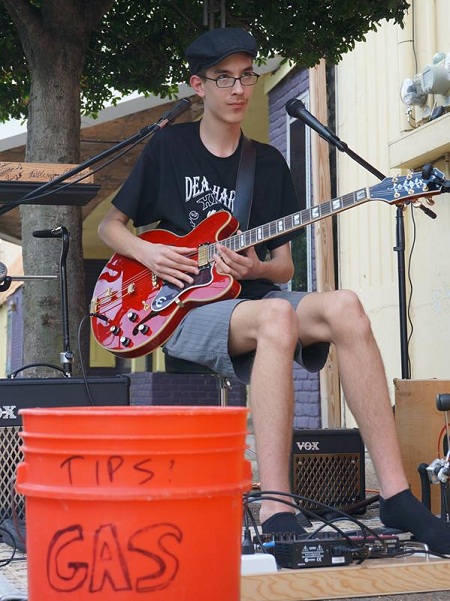 I have had the opportunity to meet so many interesting people, see so many fascinating places, and hear so many intriguing stories during my short musical career, and this whole experience has really changed my life.

My first real gig was playing for the Rockford ArtScene, which is a local event that showcases artists and musicians. I apparently drew the short straw, and I got placed in front of a dentist's office on one of the more shady streets in town, with my dad acting as a bodyguard. I was pretty nervous, to say the least! I won't say that it went perfectly, as I almost got my guitar stolen, but I managed to make it through with my gear intact and a good amount of tips.

How do you describe Justin Gates sound and songbook? What characterize your music philosophy?

I've heard my music described in many ways, but I like to think of my one-man traveling blues show as a mixture of old-time blues and new-school technology. I use a looping pedal to provide a background, but I also use a stompbox for percussion. I use an electric guitar with an octave pedal for basslines, but I also do traditional acoustic harmonica numbers. It's all a balancing act, in my opinion.

My musical philosophy is quite simple. I listen to as many artists as I can, incorporate bits of their style into mine, and try to copy no one. One of the main things I want to avoid in my music is someone saying “Hey, you sound just like [insert name here]!”. I certainly am influenced by people, but I try not to directly copy anyone.

During my time playing, I've discovered a lot of things about myself. Obviously, I've never felt the feelings expressed in most of these songs, being fourteen years old. But, I'm able to empathize with them, and I may be much more prepared for these experiences when I come upon them personally.

What is the blues? That's a question I'm asked very often. In fact, I've written a couple college papers on the subject. My answer to that is that I'm not exactly sure quite yet. The meaning of the blues changes as I have more and more experiences, hear more and more stories, and learn more and more about this music. 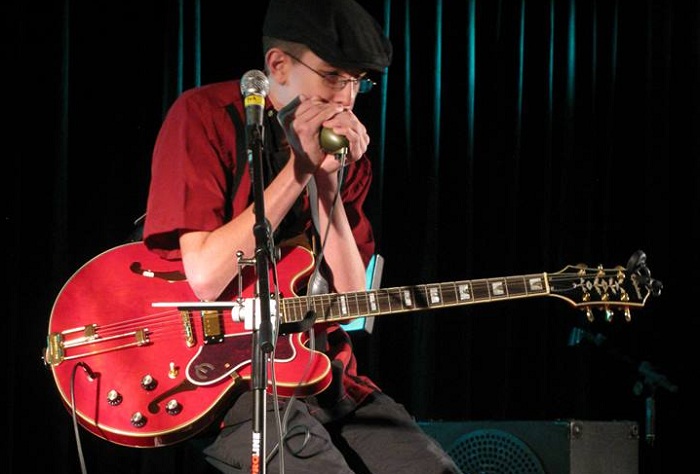 "I've heard my music described in many ways, but I like to think of my one-man traveling blues show as a mixture of old-time blues and new-school technology."

In my opinion, blues is a timeless music (being the root of most modern genres), enjoyable by people of all ages. Due to this universal quality, I feel that the blues will always have some kind of following.

I'd have to say one of the most memorable gigs I've had was the first time I went to an open jam. It was at this biker bar called the Full Moon Saloon, and I had been invited by a long-time musical friend of mine who played with the house band. Before I arrived, I had all these thoughts on what it was going to be like – a dingy, smoke-filled room filled with shady characters. I was pleasantly surprised that none of this was true. Everyone there was really nice, and I had a great time. In fact, if I hadn't gone to this jam, I probably wouldn't be where I am now.

One of the memories that really makes me smile was the first time I played with Bryan Lee and the Blues Power Band last summer. That night everything was clicking for me – my solos were feeling great, the groove was excellent, and I felt like I was on top of the world. To top it all off, at the end of the night I was told by Mr. Bryan Lee “Justin, you are welcome on my stage any time. Any time!”. After that, my grin didn't fade all week! 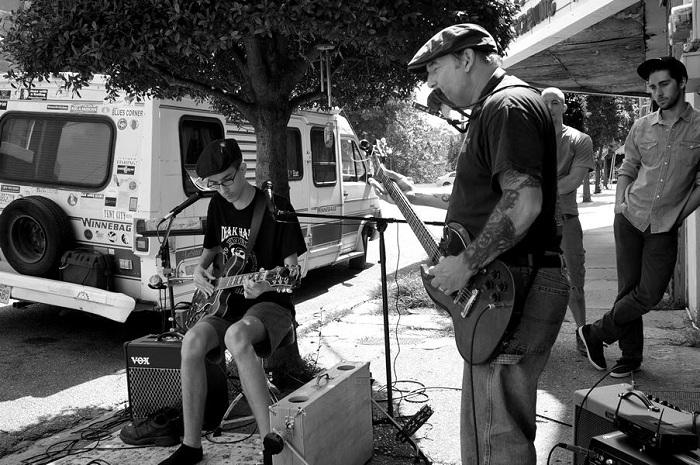 "I'd like creative melody and rhythms to replace the screaming guitars and bad melody hiding distortion and reverb that dominates the music scene today." (Photo: Justin & Deak Harp)

Meeting my mentor Wheatbread Johnson put me on the path of appreciation of music in general, and specifically the blues. I would have never even started down this path without his guidance. Also, meeting Deak Harp was my main inspiration for starting my one man solo blues show. The first time I saw Deak playing his one-man blues show, I was amazed at how much sound came out of this one man, and I aspire to achieve that level of talent. Finally, my friend Dave Potter has done so much to build my confidence level. Dave and his band, the Alley Kings, bring in various touring musicians every week to his show, and he's given me so many opportunities to meet these people along the way. I'm very grateful for everything these people have given me.

The truth is I have so much good advice that I can't choose which bit is the best. For some reason, perhaps because I'm only fourteen, everyone I meet seems to give me some bit of advice. However, each tidbit seems to be prefaced with the statement “Don't get into the music business, stay in school, and get a day job”.

The main things that I miss are the artists. More and more of the great blues musicians are either passing away or retiring, and I fear that the blues may lose its original meaning. I hope that more new musicians emerge that follow the classic style, but I'm afraid that the legacies of these blues legends may not live on. That's why I take every opportunity possible to meet, talk, and play with these guys as much as I can. 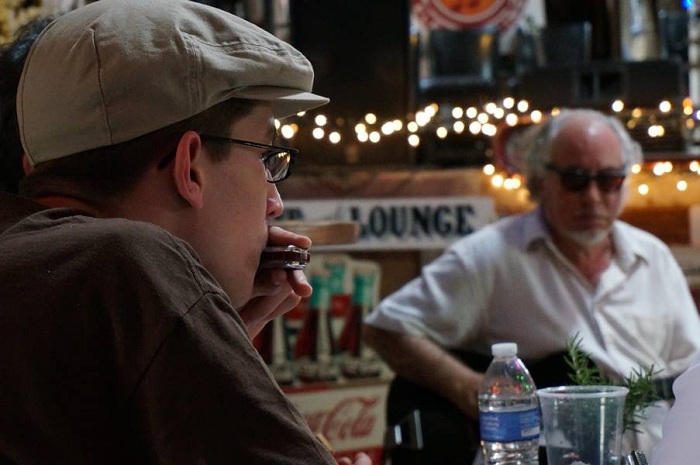 "My musical philosophy is quite simple. I listen to as many artists as I can, incorporate bits of their style into mine, and try to copy no one." (Photo: Justin & Bob Margolin)

I'd like creative melody and rhythms to replace the screaming guitars and bad melody hiding distortion and reverb that dominates the music scene today.

One of the funniest moments I've had is how I accidentally got a sound guy to sign my harmonica case. I was at a Jim Liban show, and I was going to ask him for his autograph on my harmonica box. Sadly, I had never seen a picture of him. I ended up getting the autograph of the sound guy for the event, who happened to be on the stage at the time, in addition to Jim Liban's! This still cracks me up, to this day.

I must say, one of the most emotionally touching experiences I've had recently was my trip to Clarksdale, Mississippi. Sitting on the front porch of a tar-paper shack, looking at the fields of cotton and feeling the ghosts of the Delta bluesmen looking down is a really profound experience.

I'd spend a day with my great-grandfather, play some music with him, talk about what I've done with my music, and ask for some advice. He played guitar and harmonica, and he was one of my first musical influences. He passed away just before I started playing guitar, but I still like to think he's looking down at me whenever I play. 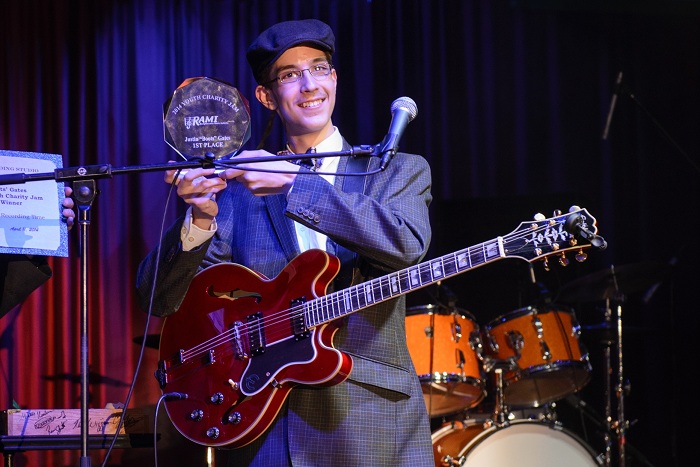