An Interview with poet and musician David Budbill: Poetry is music with words instead of notes

"When poetry and music come into being the spirit is free, released, out of it's daily prison."

David Budbill was born in Cleveland, Ohio, in 1940. He is the author of seven books of poems, eight plays, a novel, a collection of short stories, a picture book for children, dozens of essays, introductions, speeches and book reviews, the libretto for an opera and is a performance poet on two CDs. He was for a time a commentator on National Public Radio’s All Things Considered. 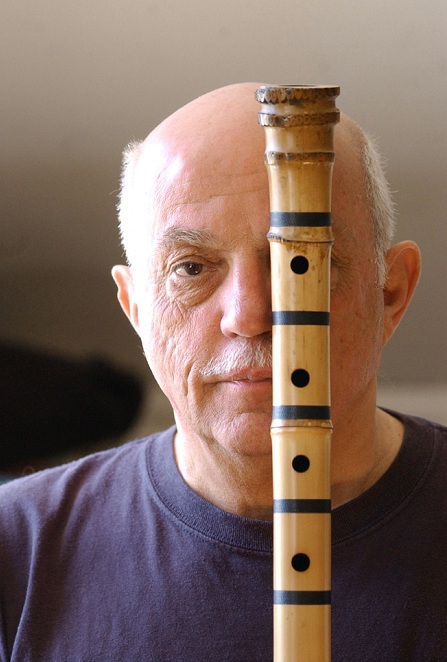 In September of 1999 published the first book of poems in a series: Moment to Moment: Poems of a Mountain Recluse. David tours occasionally with avant-garde bassist and composer, William Parker and drummer Hamid Drake. In 2003 the three released, Songs for a Suffering World: A Prayer for Peace, a Protest Against War. William Parker and David also released in 1999, Zen Mountains-Zen Streets: A Duet for Poet and Improvised Bass.

In 1999 also, Chelsea Green Publishing Company published a revised, expanded and updated version of Judevine: The Complete Poems, first published in 1991. The play Judevine, which is based on the book, has now been produced 65 times in 24 states. David is also the creator and editor of The Judevine Mountain Emailite: a Cyberzine: an On-Line and On-Going Journal of Politics and Opinion. In 2000 David wrote the libretto for an opera, with music by composer Erik Nielsen, called A Fleeting Animal: An Opera from Judevine, which is based on two characters from the Judevine poems. In July of 2005 published his second book of poems in a series called While We’ve Still Got Feet.

David’s play, A Song for My Father, premiered in 2010 with two separate productions. For review excerpts, still photos, etc. In September of 2011 published Happy Life, his third book of poems in a series. In New York City David has performed at John Zorn’s The Stone, Merkin Hall at Lincoln Center, The Nuyorican Poets’ Cafe, The Knitting Factory, The Great Hall at Cooper Union, among numerous other venues. He has also performed with the Vermont Contemporary Music Ensemble. (Photo by Jeb Wallace-Brodeur)

When was your first desire to become involved in music and poetry?

Impossible to say for sure, but a long long time ago, probably in high school when I began writing poetry and was also playing trumpet.

How has the music and literature changed your life?

When I was 29--the same age as Han Shan (Cold Mountain) when he left civilization--I retreated to the remote mountains of northern Vermont where I've been ever since. [This was the year after 1968, the assignations of Martin Luther King and Bobbie Kennedy, the riots at the Chicago Democratic Convention, etc.] I write about my life in these mountains and I write about that in a musical way. Music and poetry are the same thing. Poetry is music with words instead of notes. 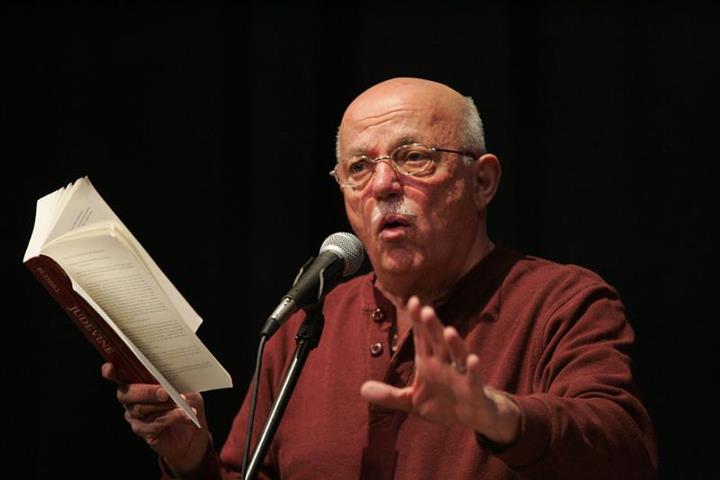 "Music and poetry are the same thing. Poetry is music with words instead of notes."

A rhythmic arrangement of words, an honest approach to whatever the materials are and attention to the environment I am in at the moment.

I have no idea whether I'm a good poet or not. My job is to make poems. The good part is for somebody else to decide, but somebody who is NOT connected to the current establishment.

What experience in life is the trigger for the creation?

My everyday experience, what happens to me moment to moment and day to day.

Poetry and music can confront the “prison” of the spirit?

When poetry and music come into being the spirit is free, released, out of it's daily prison.

A rhythmic arrangement of words, an honest approach to whatever the materials and attention to the environment that the music and poetry is coming out at the moment.

How important was the music in your life? 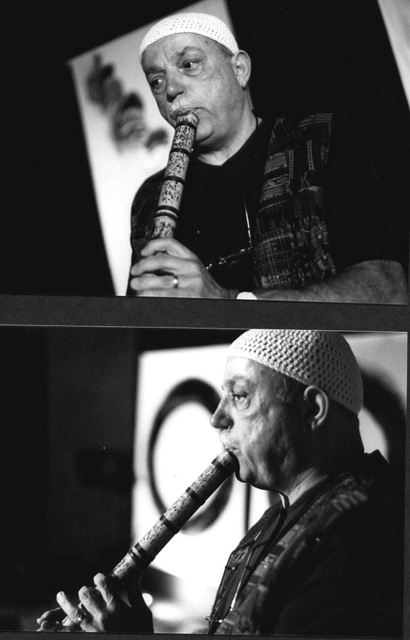 Very important. I listen to music every day and I play music everyday--currently I play shakuhachi--long tones and simple tunes. I've always played some kind of musical instrument--trumpet, the saxophones, flute, shakuhachi. I like the non-verbal nature of music, which is what I'm aiming for--that non-verbal-ness--with my poetry.

Right now. Because it is right now.

What's been your experience from Lincoln University, in Oxford, PA at late 60s?

Teaching at Lincoln, which is an all-Black collete in Pennsylvania, for two years--those two years being 1967 and 1968--was an eye-opener. To be living in an all Black world during the assassinations of Martin Luther King, Bobby Kennedy and the riots in Chicago at the Democratic Nation Convention that summer, was to see Amerika from a Black perspective. I was disgusted with Amerika and it was then that I decided to go to the mountains of northern Vermont, to leave Amerika because it was broken beyond repair. Here's a quote from 17th Century Chinese, painter and poet, Xiang Shengmo

Entering the mountains is not avoiding the world,

But a deep desire to be far from floating fame.

From whom have you have learned the most secrets about the music and poetry?

Without a doubt from William Parker and Hamid Drake

Would you mind telling me most vivid memories from performing your poetry with Jazz musicians?

All my many performances with William Parker and with Hamid Drake.

So when did you begin reading and performing your works?

In January 1997 in New York City with William Parker, Cooper-Moore and Susie Ibara What are the lines that connect the legacy of Jazz and Blues culture with Zen teaching and haiku?

I can't say but I know they are there.

Why did you think that Blues and Jazz continued to generate such a devoted following?

It's elemental music. It's about the human soul, about, as Mohandas Gandhi said, "the soul's upward surge and unrest."

Slow down when reading with musicians. See, feel how the words fit into, over, around and through the music.

What are your hopes and fears on the future of world, music and poetry?

That TV and the Internet, Itunes and so forth, will take the place of live music and live performance.

Old, very old, from the 30s and 40s, movies, for both laughed and touched.

Which incident of your life you‘d like to be captured and illustrated in a Zen painting? My life here on Judevine Mountain

How you would spend a day with Buddha in a Jazz club?

Just "hangin' out and visitin'"

Why do human beings suffer?

....for the end of  interview a poem by David Budbill

Quoting Xiang Shengmo's Poems to Make a Poem
or
A Seventeenth-Century Life and a Twenty-First Century Life Compared
Naturalness quiets the worldly heart. Thoughts of engagement
are idle. Profit and fame can be seen for what they are. In this
world there are no men of accomplishment. Who cares about
high officials in carriages? Oh, so hard to break the delusions
before our eyes. Can one ever escape bending at the waist?
Being alone is not being without companion. Books and scrolls,
by chance, take half the bed. Across the stream, a thousand
acres of bamboo; throughout the day a brazier of incense.
Village wine, it turns out, works well for getting drunk;
garden vegetables provide an early taste. A pure wind arrives.
Since coming to live on this riverside rock, I no longer hear the
clamor of horse and cart. I want to grow old in utter indolence.
© David Budbill 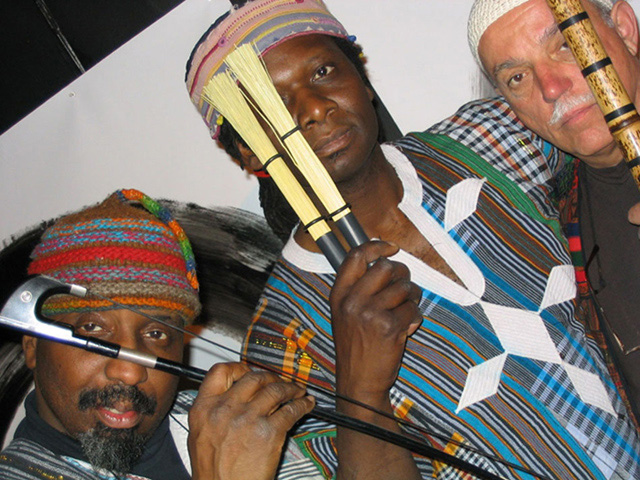