"Music allows us to feel human, love, tread lightly and taste a little wisdom to appreciate the sanctity of all life. Music can turn us towards compassion."

Matt Turk is a musician, recording artist, multi-instrumentalist, veteran performer, troubadour, bandleader, eternal idealist, peace loving realist. Multi-instrumentalist and roots artist Matt Turk does that and much more. With stellar instrumental chops (guitar, mandolin, lap steel) and a warm, expressive voice, he’s performed in hundreds of venues all over the world, from Europe to the Caribbean; in New York City at the mayor’s residence and at Congregation B'nai Jeshurun, where he’s a resident musician. As a side player, bandleader, and solo artist, he’s shared stages with everyone from Norah Jones to The Doobie Brothers. His “Fog of War” video features special guest Pete Seeger. 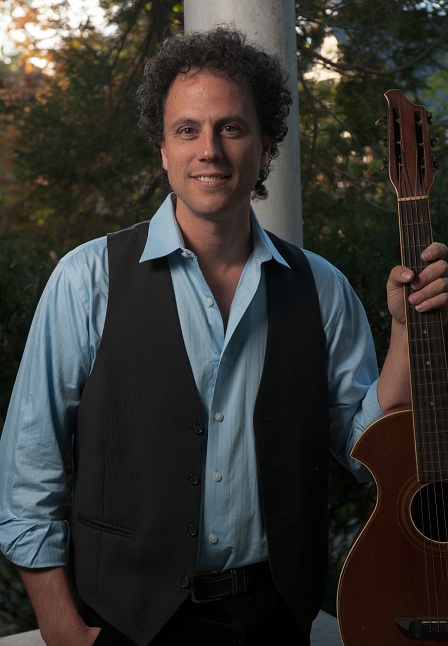 He’s sold over 10,000 albums. The Denver cover is on his 2010 collection of classics, American Preservation. Recorded live and produced by David Dobkin, it also includes a stirring a cappella version of Pink Floyd’s “On the Turning Away.” He’s not afraid to tackle “America the Beautiful,” giving it a cool rootsy vibe complete with Dobro. He has three other solo albums – Washington Arms (2006), What Gives (2002) and Turktunes (1999) – as well as one album with Mandolin Caravan, Desert Soul (2003), and one as part of duo Gillen and Turk, Backs to the Wall (2008). A new solo recording is in production.

Well-known as a side-player, he recently added background vocals to Pete Seeger’s A More Perfect Union and mandolin to Seeger's Grammy nominated The Storm King. Matt was a founding member of The Hour, a ground-breaking NYC jam band that released three albums. They were the house band for three summers at Arrowhead Ranch, aka Fillmore of the Catskills. Associated with the renowned Bill Graham, the venue regularly attracted rock royalty like Lenny Kravitz, Phish, Blues Traveler, Levon Helm, Little Feat, and the Dave Matthews Band. He’s showcased at the International Folk Alliance Conference, and opened for many including Fiona Apple and Judy Collins. Favorite gigs include an appearance at the New York Disability Parade and many performances at Clearwater’s Great Hudson River Revival, where he coordinates the Jam Tent.

How do you describe Matt Turk sound and progress, what characterize your music philosophy?

As a little kid, I saw my dad really enjoyed music and artists like Otis Redding, Beatles and Harry Chapin.  It was sharing in that fun that got me started.  My mother was into all kinds of interesting stuff including Debussy, Edith Piaf and Allen Ginsberg.

As an artist, we are always just becoming.  For me the day to day is slow and steady and work is craft.  I have fun, practice, work on the craft, get out there and play live as much as I can. A couple of times a year or so I get to make a recording in the studio with friends. 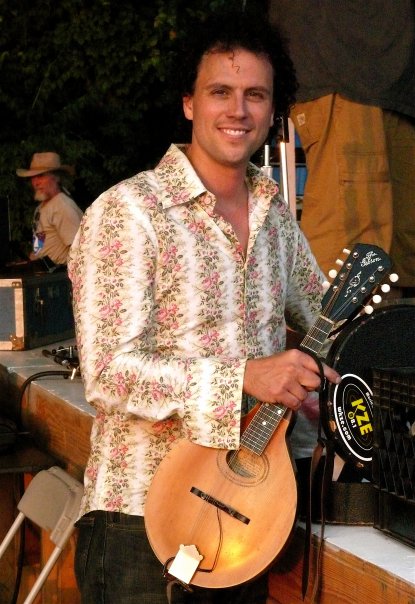 Basic life experiences, personal relationships, being human, feeling emotions, witnessing wonder, being in awe, being in love - I'm recently married and this has added a whole new dimension to life and the meaning of love, falling out of love, experiencing tragedy, humorous things and being a part of social justice; these all trigger ideas for songs most frequently for me.

"The best advice I have received is to be nonjudgmental, down to earth, follow my values and work on my craft."

Can the music crush the shackles of the human spirit and mind? How we can change the world?

Music can warm the heart, soften the mind and bring us closer to overcoming our individual and collective pain and suffering. Music can help us to transcend our wiring and conditioning. Music allows us to feel human, love, tread lightly and taste a little wisdom to appreciate the sanctity of all life. Music can turn us towards compassion.

Now is the most interesting period of life because it is here and were I not to have this commitment to now I might not persevere.

A recent birthday of mine was celebrated during a concert where I accompanied Pete Seeger and a chorus of inner city homeless kids.  In a convergence of my values and craft, Pete sang a rare New Mexican Indian "Happy Birthday" song to me in front of the audience and his gift of song to me in that personal, public way was very moving.

Why did you think that the Folk and Roots music continues to generate such a devoted following?

Some folk and roots music share in a human feeling that is connected to the heart and is undeniable for the listener. The source of some of this music comes from great suffering, great joy and a very real human experience that is very compelling to a listener.

I just did a gig with Adam Roberts on bass, Joe Bonadio on percussion and Gary Schreiner on keys, chromatic harmonica and accordion in Harlem at Floradita. At some points, the music seemed to be playing itself. I think that's what they call "being in the zone". Another memorable moment is years back at Wetlands in New York  jamming with a few musicians including Wavy Gravy, John Popper from Blues Traveler and The Hour's Mike Mulvey on bass.  That was an exciting psychedelic electric blues jam with Wavy making up words and all of us free flying. 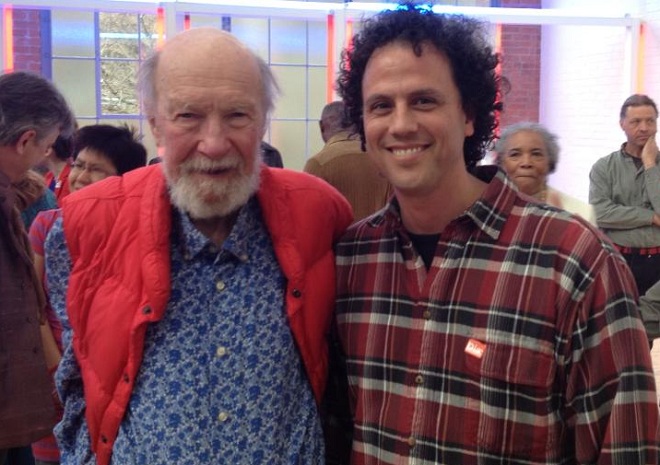 "Music can warm the heart, soften the mind and bring us closer to overcoming our individual and collective pain and suffering. Music can help us to transcend our wiring and conditioning." (Photo: Matt and Pete Seeger)

Memorable gigs including singing with Pete Seeger at Lincoln Center and Clearwater's Great Hudson River Revival, playing with The Doobie Brothers and Fiona Apple at the Beacon Theatre in New York City. I loved singing in Big Sur, California with Fred Gillen Jr. at the Henry Miller Library under a canopy of Redwood trees. Truly amazing was leading the American with Disabilities Parade from Grand Central Terminal to Madison Square Park with Liam Greguez and a couple of thousand folks with disabilities singing their hearts out  to "Ain't Gonna Let Nobody Turn Me Around"!

I have been very fortunate in having many wonderful teachers and mentors. Presently Hot Tuna's Barry Mitterhoff is teaching me mandolin and music. He is an amazing musician and teacher. I also have great admiration for his colleagues Jorma Kaukonen, Jack Casady and all that is a part their universe…

Early in my career, through my friendship with Russ Irwin, Aerosmith's keyboardist, I got to record with Phil Ramone. Phil took a great interest in me for a short while and I benefitted from his wisdom regarding recording, composing and making music.  Also early in my life I was exposed to the artistry and live performance of Allen Ginsberg, Harry Chapin and Pete Seeger. I found all three profoundly influential.

The best advice I have received is to be nonjudgmental, down to earth, follow my values and work on my craft. "Some folk and roots music share in a human feeling that is connected to the heart and is undeniable for the listener."

What are the lines that connect the legacy of Blues with Folk and continue to Jazz and Jam-Rock music?

Jam is improvisational and a newer "coded" form really coming out of a Jazz/Psychedelic head (think Jimi Hendrix). For example, if you listen to Derek Trucks or Eric Krasno, tho' often categorized as Jam, they are really great American guitarists blending elements of Jazz, Rock and Blues. These lines are meant to be blurred, except perhaps in marketing.

Do you remember anything funny from The Hour?

It would take a book to recall all that is funny about The Hour. That experience was a joyful success. What a great time it was and a fine body of work was created. Funny stuff?  we used to order and eat as much food as we could at a minimum of cost…I remember once, Jon Vitarelli (original drummer) sat down, ordered breakfast, lunch and dinner and ate them in immediate succession. I had a great time, especially with Marshall Madow. He was a great partner and super funny guy.  He was from Queens and was a little punk like a Ramone. He had that New York City, Queens ain't no big deal thing…He also was friends with Giorgio Gomelsky and we used to rehearse at his studio. Giorgio had many great parties and visitors and was a real character.

Take me to a small juke joint to hear Memphis Minnie, Blind Lemon Jefferson, and to his porch to hear Mississippi John Hurt. Gimme a fresh lemonade and let me soak in the depression era country blues in its original environment, where it all started. Then let's hit a recording session and make a 78! 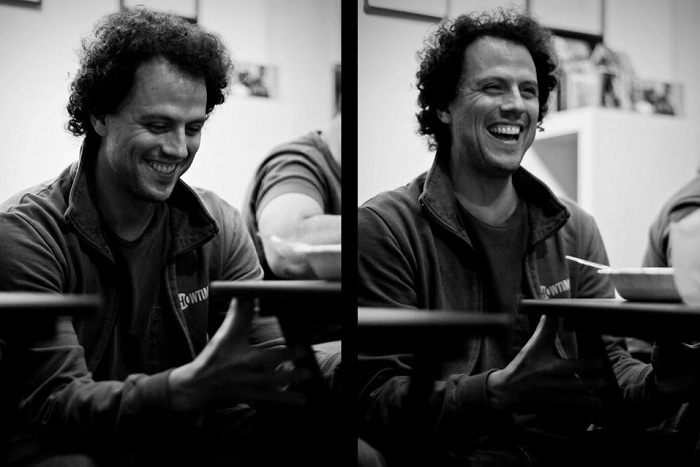