Interview with Russell Mefford & David MacKay of Fiddleworms, music that ferments in the mud of South

"As humans we always feel a need to label things and then pit them against each other. I think when you close your eyes and listen you can find a relation to them all."

The Fiddleworms emerged out of Muscle Shoals, Alabama; taking their name from night crawler catfish bait and known for fat chops, meaty grooves and original rock, which has become the central theme of their legendary live shows.

The Fiddleworms music and persona feature images of southern character and charm with personal stories that transcend life’s struggles. Performed by five seasoned musicians The Fiddleworms are made up of guitarist/vocalist and founder Russell Mefford, guitarist/vocalist and former Drive By Truckers member Rob Malone, bassist David MacKay, drummer John Tombyll and keyboardist Clint Bailey; all members have deep roots in the music and recording culture, including southern rock, jam band, and rock music scenes.

With Heart of Gold Records release, VOLKSWAGEN CATFISH, produced by Jimmy Nutt, the album features music that spans a spectrum of styles, including reggae, country, jam band, rhythm and blues, funk, New Orleans jazz, rock and reflects the long and storied history of the Shoals music scene and the band members' individual past influences and connections.

The Fiddleworms create a live music scene that encompasses a wide array of talent and styles that fans adore. Their ability to captivate an audience through their harmonies, lyrical style and Malone’s 'salt-of-the-earth riffs' are beyond comparison. The band was recently in Relix Magazine as one of the buzz bands of the new sound of Muscle Shoals and their latest album release "See the Light" was reviewed as a 'southern homage to Sgt Pepper's Lonely Hearts Club Band.'

Russell: I do not ever remember not being totally obsessed with music. I started playing guitar when I was 15. I was mentored by a Blues musician from Tampa Florida named WAZ. WAZ and I still remain very close friends. Confidence is always a wall that most musicians continue to try to climb. WAZ has always made me feel as if I belong amongst the many people I admire in this business. He has always told me that people played music before people wrote down how to play music. To have someone you respect, as much as I respect WAZ, believe in you is very empowering. We also have been given that support from our heroes here in Muscle Shoals. When Jimmy Johnson walks up and gets 2 inches away from your face and says "I think your new record is great!, do you?"  It is very powerful and uplifting. We live in a very special place with some very awesome people who are accessible and generous with their knowledge.

David: I was always drawn to music. I first felt like I would become a musician in 1959 when I was 8 years old and heard a Chuck Berry song. I have learned from every musician that I have heard. I was especially impacted by the music I heard in the San Francisco Bay Area during the 60’s and 70’s at music cathedrals such as the Fillmore Auditorium, Avalon Ballroom and Winterland. 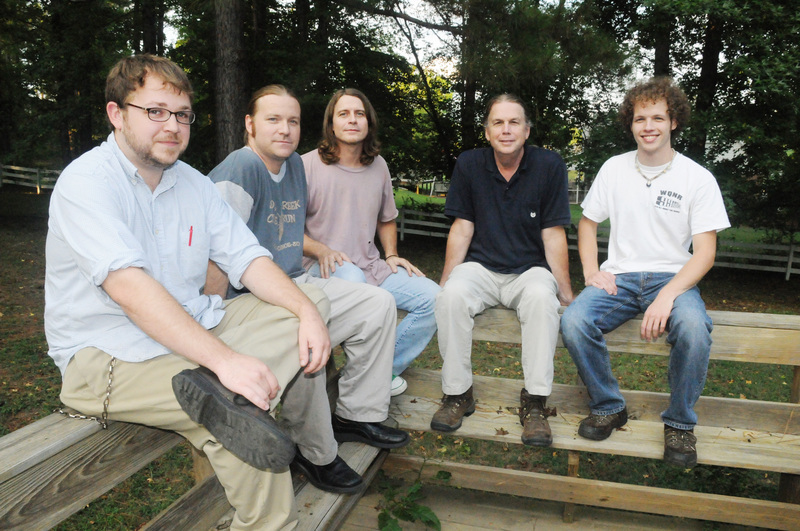 How do you describe your philosophy for the music and what characterizes the sound of Fiddleworms?

Russell: I try to follow the song. The song may need some encouragement but it has always been there. I could never just make it up. It will come to you if you keep your eyes and ears open. We take that approach with the Worms. We let the song lead the way. Therefore it may be influence by any genre.

David: The Fiddleworms has a very eclectic approach to music and that fits me very well.

Tell me about the beginning of Fiddleworms. How did you choose the name and where did it start?

Russell: I started the Fiddleworms in 1994 with Chris Quillen. It has been said that the music of Muscle Shoals comes out of the mud here so we thought the Fiddleworms was a good fit for us.

A fiddleworm is a large earthworm. A way to catch them (to fish with) around here is to split a sapling (small tree or brush) and run a saw blade back and forth across it (like a bow across a fiddle). The vibration of this causes the worms to come up out of the ground. It is best to "fiddle" for worms after a rain. Since the Muscle Shoals sound is claimed to have come from the mud we thought the name was a subtle way to say where we come from.

Russell: The best moment in my career is right now! I feel really good about the people I am fortunate enough to be a part of this. I have many high and low moments but not a worst moment. I like to think there have been lessons learned from the good and the bad times.

David: I try not to dwell on the negative. The music business can be very difficult and it’s best to dwell on the positive. I suppose that two of my favorite moments were: 1) touring Australia with Michael Nesmith in the 70’s when our record had reached #1 in Australia. 2) playing the Fillmore Auditorium a few years ago with the Heart of Gold Band. Some music styles can be fads but Muscle Shoals music scene is always with us. Why do think that is?

Russell: The musicians, I believe, have let the music played here come to them. They have listened and as a result there is a honesty to the music from this area.

David: The music is steeped in the collective soul of American music. It is mystical, but visceral, and always soulful.

Which memory from the road and recording with the band makes you smile?

Russell: Lots of great memories from the road and studio. Of course we are honored to have Donna Jean Godchaux sing on our last 3 records.

David: There are many live shows that I have loved and recording the Volkswagon Catfish album was very special to me. That is one of my favorite recording experiences.

Which meetings have been the biggest experiences?

Russell: Having Sam Phillips call me in my dorm room when I was 19 years old, he had me mail some songs I had written to his son in Memphis. Having Jerry Wexler call me and give me his New York Address, his Florida address, his phone number and tell me to mail him 4 copies of our Yellowhammer record to him and call him anytime. That blew my mind.

David: Before Jerry Garcia died, my wife Donna (a former member of the Grateful Dead) and I spent the morning with him the last time the Dead played in Birmingham. He was a wonderful, generous and always insightful man. What is the relation between reggae, country, psychedelic, r&b, funk, New Orleans jazz, and rock music?

Russell: The relation between different genres is along the lines of race to me. They are all equal to the unbiased ear. As humans we always feel a need to label things and then pit them against each other. I think when you close your eyes and listen you can find a relation to them all.

David: They are all roots oriented music and touch the core of our beings.

Do you know why Southern Jam sound is connected to the psychedelic culture?

Russell: I am a big Beatles fan so they were my first exposure to Psychedelic music. I learned later, of course, that much of it came from the west coast. When the Beatles started with it you saw a departure from the 3 minute pop song. Then you got to where the Grateful Dead and other west coasts bands were taking it from a pop song to a novel. They delivered and also were not in a hurry to get there. This laid back approach and "workin' on a building" attitude appeals to me and probably many others who are raised in the South. They talk about how Duane was the first hippie a lot of folks here in the Shoals had ever seen. Jimmy Johnson is quoted, in the new Muscle Shoals Movie, that Duane’s solo at the end of Wilson Pickett’s cover of Hey Jude was the birth of Southern Rock. There is a connection of kindred spirits between Southern Rock and Psychedelic music.

David: The love of the jam and the exploration of music.

What is the “feeling” you miss most nowadays from Grateful Dead and Allman Brothers era? 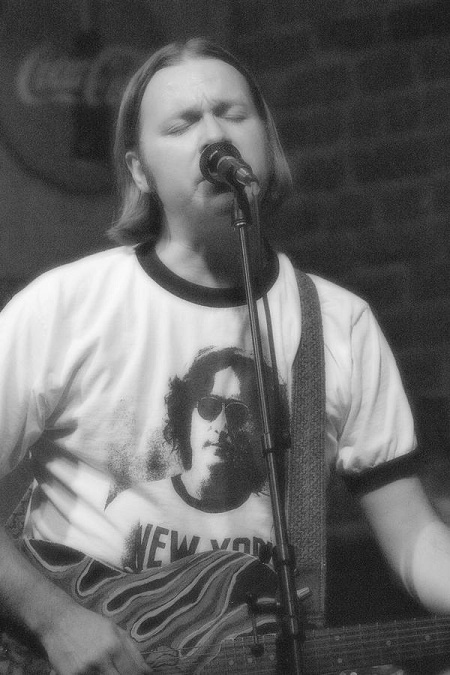 Russell: The Grateful Dead and Allman Brothers are really before my time. We opened a show on the side stage at an Allman Bros show back in 1996 or 97. They had Warren Haynes, Dicky Betts, and Jack Pearson in the band. Oteel was playing bass, Greg on keys of course and I thought they were fantastic. David grew up in San Francisco during these bands heyday so I feel he could answer that question more thoroughly than I.

David: I feel they are still prevalent, and there are many bands who are exploring those avenues of music. There was though something special about the early days of those bands and the newness of the sound. It was new and magical to us. Although we were not jazz musicians, we learned through the Dead etc. that we could develop a musical vocabulary of our own that would allow us to have musical conversations like jazz musicians did. We could play our own songs and extrapolate on the themes just like jazz players did. Bands like the Dead opened up the door for us to jam and explore new musical territories!

Russell: We have released a companion DVD to "SEE the Light". It shows many snapshots and video that I do plan to put in a time capsule for my children and future generations of my family. The DVD shows the history of the band and making of the new record through photos, video, and newspaper clippings, All set to the music of the new album.

What is the best advice ever gave you? Happiness is……

Russell: The best advice I have been given is from my Father. "If you are coming from the right place in your heart then there is a key to every door" Happiness is realizing the moments when you are doing the right work to earn those keys.

David: Learn the groove and don’t lose it! 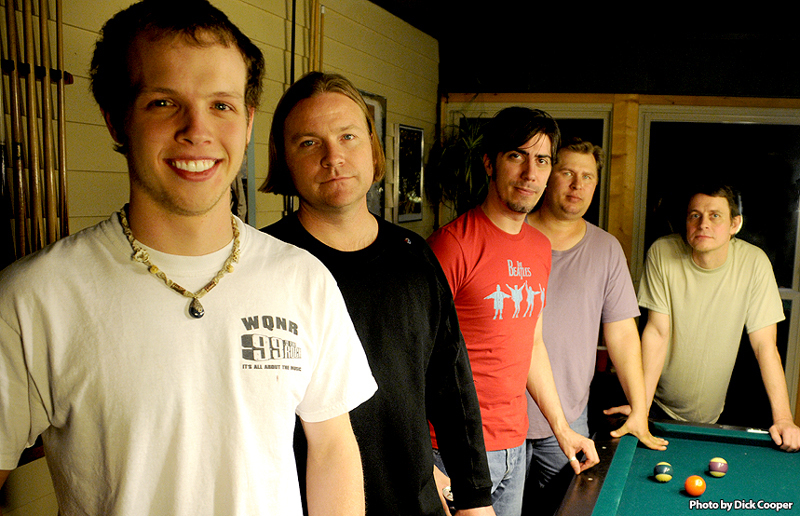