An Interview with Italians Veronica & The Red Wine Serenaders: A music journey to the south of past

"As Willie Dixon used to say: 'The blues is the roots; everything else is the fruits.' Nothing can grow on a plant if it has no roots ... that's why the Blues will always be with us!"

The vaudeville, the medicine show, ragtime, blues, gospel and spirituals in the new musical Sbergia Veronica & The Red Wine Serenaders. A concert that is not just a concert, but a journey through the plantations of the southern United States, the brothels of New Orleans, prohibition with all its contradictions, the barrelhouses of the Mississippi Delta and the prisons of Louisiana, a path that winds on the edge of the voices of the great singers of the twenties and field recordings of bluesman forgotten, until you get to the urban blues of the Great Depression of '29. A sort of bandwagon circus where the instruments of the American musical tradition (and acoustic resonator guitars, ukulele, banjo, washboard, kazoo), we will discover the surprising relevance of the music of the '20s and '30s. Among ragtime, folk, pre-war blues, early jazz and spirituals hear the voice and the sound of the weakest of the U.S. population and this is perhaps the most authentic and evocative. You will be surprised finding out how many similarities there are between the past and the present. The band won the 1st prize in the 3nd European Blues Challenge 2013.

When was your first desire to become involved in the music, from whom have you have learned the most secrets of?

Veronica: Since I was a little baby I've always dreamt about becoming a singer or an artist, in general. I have always been attracted to the “Entertainment world” and to all the unconventional and colorful people revolving around that world. My father was and still is a great fan of jazz and American black music and I can say that the music I used to listened to in our house has laid the foundation of my musical education. There ain't any secrets but only a lot of listenings...and love and passion too!

Max: I started to play acoustic guitar after listening to a Rev. Gary Davis album way back in '70's, everything I know I've learned it from the records. 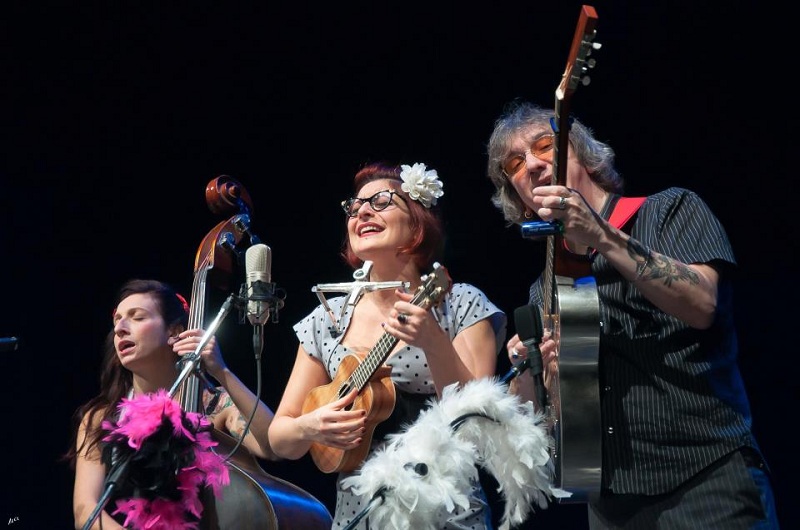 What characterize your sound and how do you describe the philosophy of Red Wine Serenaders?

Veronica: How did you choose the name? It all began on 2009...since the release of an album by Max De Bernardi and Mauro Ferrarese, called “The Red Wine Tapes” (title also inspired by the “Pizza Tapes” form the Grateful Dead). We decide to keep the name for my solo debut album called Veronica & The Red Wine Serenaders and so the story began! The RWS is a musical project featuring a talented combo of musicians who passionately play country blues and ragtime, hokum, jug band and rural music from the 20s and 30s, they like to keep this precious musical heritage alive faithfully reproducing its original sound whilst playing it a modern twist.

Max: I've always liked pure acoustic music and I thought that the RWS are good vehicle to spread this way of playin'  in a more "modern" way...

What do you learn about yourself from the blues and jazz, what does the blues mean to you?

Veronica: The blues is a musical genre to which I am bound because it is in the blues that I find my greatest vocal expressiveness, I like to interpret the many facets that every single song I choose gives me. It taught me the history and awareness and is a daily source of inspiration to me.

Veronica: The best of course was the winning of The European Blues Challenge! And the worst?...I don't remember...It will probably happen when I'll have to choose to quit the “music world, 24/7” because I'll be too old! But we will discuss this in a bit of time!

Max: Every good gig is a good moment and the worst is yet to come... What do you learn about yourself from the blues? What experiences in life make a GOOD musician and songwriter?

Veronica: As I told you before I learned a lot about the awareness and the importance of being a coherent and credible person. To investigate things is very important nowadays when all we are trying to is doing everything possible to forget our history, where we come from and where we are going. I don't know which experiences can make a good musician...probably all kind of experiences are worth to do...I mean...life is so inspiring itself!

Max: If you are happy you make good music...if you're not you make bad music....

Veronica: Luckily we had a lot of nice gigs all around Italy and abroad...some are special for the audience, other for the music...Blues Sur Seine, Cognac Blues Passions, Lugano Blues To Bop, Summer Jamboree just to name few of them...

Max: I don't remember actually what has been the best of my gigs and generally jam sessions don't appeal to me that much…

What's been their experience from EUROPEAN BLUES CHALLENGE? What are your conclusions from European scene?

Veronica: It was definitely an interesting experience and it was worth the effort. The blues scene in Europe is constantly evolving and I have noticed with joy that in young people the love for acoustic music is coming back, small groups and low volumes. Hurrah!

Max: I expected more responses in terms of booking after winning the competition but, until now, it didn't happen... Veronica: As Willie Dixon used to say: “The blues is the roots; everything else is the fruits.” Nothing can grow on a plant if it has no roots ... that's why the Blues will always be with us!

Max: The blues is only a part of the music I play and I like it.....if you think about the blues as a feeling in the music is very important for every kind of music...

From the musical point of view is there any difference and similarities between early blues jazz era and nowadays?

Veronica: We believe so much in the timeliness of this music that we named our latest CD “OLD STORIES FOR MODERN TIMES”. We've chosen the songs from a repertoire ranging from 1910 to 1939, a real invitation to the rediscovery or, in some cases, the discovery of the characters that have made great this music with their stories; songs that bring fun, deeply moved, rhythms for dancing or being rocked. Among ragtime, folk, pre-war blues, early jazz and gipsygrass, everybody can listen to the voices of the poorest of the U.S. population and, reason to this, perhaps the most authentic and evocative. You will be surprised discovering how many similarities there are between the past and the present days.

Max: In the old days this music was much more considered and widespread, I can't tell you the same now....

What are you miss most nowadays from 20s - 30s? What's the legacy of early Blues Jazz to present music?

Veronica: I miss the idea of ​​having a dream and try to make it happen. Music of those times still can make me dream. Nowadays, seen all the problems and difficulties that we are forced to face to live or survive everyday, there is less and less space for dreams. People can find at least some relief in music. And the legacy in the modern music is simply everything! Beatles, Led Zeppelin, Rolling Stones, Bob Dylan...I can write thousand names of bands and artists who were significantly influenced in their musical journey from the pre war blues. 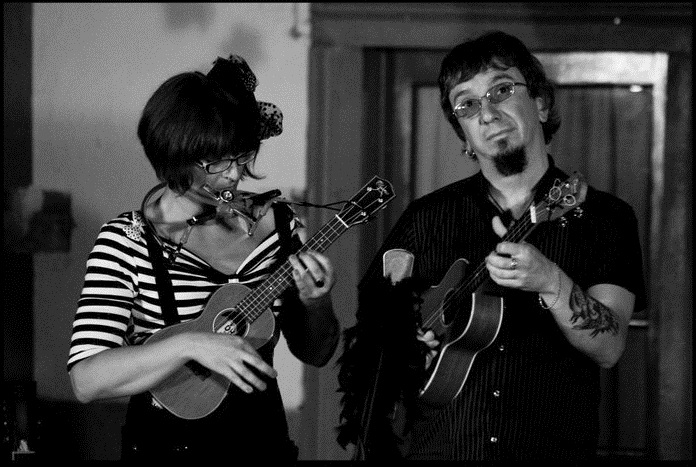 Do you know why the resophonic and slide is connected to the blues? What are the secrets of?

Max: I don't know it has a good and loud sound and was invented because had to be heard especially with the horns....reso guitars are not used only for playin' the blues...

Are there any memories from the road with the blues and Sugar Blue, which you’d like to share with us?

Veronica: Blue is a dear friend for a long time, we had the pleasure to spend a day together during the recording of the album and the only thing he wanted in return for his participation was a dish of lasagne and a glass of wine! He is 100% “one of us”!

Max: No....not many memories, for me they were a vehicle for experiences and good musicians and Sugar Blue is still a good friend of mine....

What are the common lines that connect the legacy of Rev. Gary Davis and Blind Blake with new generation?

Max: Nobody today can play like that guys of the past, they has leaved the inspiration for us all!

What are the common lines that connect the “legacy” of brothels of New Orleans, barrelhouses of Delta and the prisons of Louisiana with European musicians?

Veronica: We had also in our countries brothels, barrelhouses and prisons...

Make an account for current realities of the case of the blues in Italy. How has changed over the years?

Max: I don't follow the blues scene in Italy because I'm not interested in blues bands generally, I know that we have lots of generic blues bands and some of them are good friends but I think that we have too much blues bands in Italy that play the same kind of style and they are all the same.

Veronica: My mum cooking my favorite dish, friends who loves music and good food and wines...a simple life definitely turns me on! 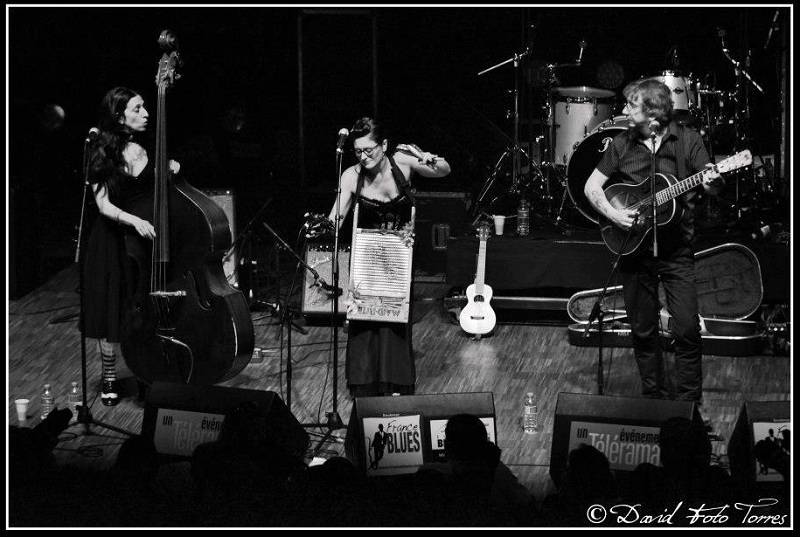