Ray Greene is a singer, producer and multi-instrumentalist living in Boston, Massachusetts. Being brought up in the shadows of the great Soul/R&B legends of our time, Ray is equally adept at the traditions of Gospel, Jazz and Blues. Ray has performed with several of the biggest names in the fields of Pop and R&B, such as Aretha Franklin, Natalie Cole, Rick James, and NKOTB, to name a few. His Gospel release, titled “Songs of Hope, Inspiration and Joy”, garnered much critical and commercial success.  Ray’s latest recording, called “Heaven Bound”, was recently released on his SoulVision Records label.  He also co-produced a Christmas project with well-respected pianist Dow Brain for Underground Productions called “Tell Me the Story of Christmas”, also on SoulVision Records. Ray wrote, produced and performed his first solo disc entitled “All About You/All About Me.” It was released in the UK and received rave reviews. His voice has been featured on commercials for Converse sneakers (with basketball superstar Magic Johnson), ESPN, Cadillac, Bose Speakers, Fox Television and Walt Disney Productions. Greene produced the music for and starred in an educational rap video sponsored by the US State Department for school-aged children called the “Lady Bug Law.” Ray grew up in Georgia listening to his father sing Gospel music. Ray replaced Larry Braggs as Tower Of Power's lead vocalist on December 2013. He was exposed to the recordings of Sam Cooke, James Brown and Otis Redding at a young age. This music would leave an indelible mark on Ray throughout his life and career as a musician. When Ray came to Boston to attend Berklee College of Music as a trombonist, one of his first exposures to performing in horn bands was getting to play a significant portion of the Tower of Power playbook. His Music has been heard on daytime soap operas “The Young and the Restless” and “One Life to Live.” He is also featured in an HBO documentary entitled “Legacy” which was recently nominated for a Grammy Award.

The blues represent all of the different emotions contained in the human spirit: joy, pain, heartache, redemption, sadness, happiness, love going good and love gone bad. The blues give you the opportunity and the forum to express exactly what has happened to you in your life and to be able to share it with an audience that will be able to relate to what you have experienced.

How do you describe Ray Greene sound and songbook? What characterize your music philosophy?

I love the way music allows me to express myself. I enjoy interpreting songs and music because it allows me the ability to express and emote with the listener in a way that does not come naturally to me. I want to take the audience on a music rollercoaster of emotions. I want them to feel everything contained in a song. If it's a Gospel song, I want my listeners to feel the Power of the Holy Spirit or the Love of Jesus Christ in whatever I am singing about at the time. If it's a love song, I want the listener to feel the love within the lyrics and the performance. And if it's a breakup song, it is important for me to take my audience to that place where there may be tears and disappointment. Whatever the message of the song, that is the emotion I try to convey. Passion in the music is of paramount importance. A dance track or a happy, feel-good type of song should feel joyful coming from me in the performance and should be translated to the listener so that everyone is joining in with me as I tell the story. 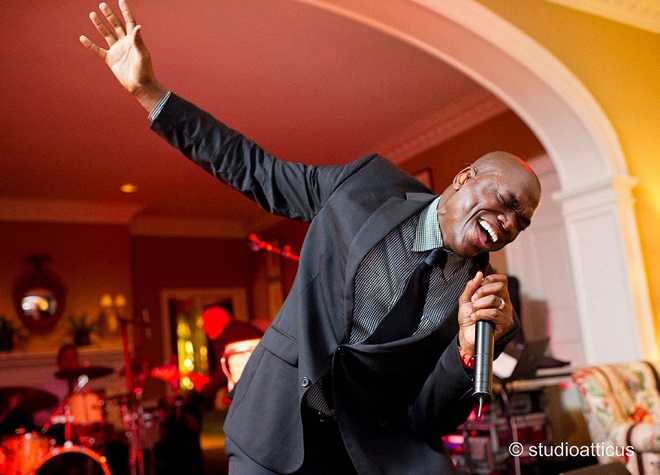 "The blues give you the opportunity and the forum to express exactly what has happened to you in your life and to be able to share it with an audience that will be able to relate to what you have experienced."

Passion, joy, longing, celebration, hurt, pain, anguish, redemption, overcoming adversity worshipping, praising and spreading the Gospel of the Good News or sharing stories of disappointment and despair all serve to connect these important idioms to each other. Mahalia Jackson, Marvin Gaye, Sam Cooke, Otis Redding, B.B. King, Aretha Franklin, Ella Fitzgerald, Duke Ellington, Ray Charles, Muddy Waters and countless others are some of the messengers that helped to connect the audiences to these different sounds in the music.

Each time I have been blessed with an opportunity to perform has been a chance for me to grow. I count every experience I have ever had as a musician as a lesson. With that being said, there are certain performances I have been a part of that have truly taught what it means to be a professional. I got the chance to see firsthand how people like Aretha, Rick James, and Natalie Cole relate to their fans during a performance. It truly is a love affair you can get to have every night. The best advice I was ever given was to keep smiling and keep singing because that is what people need from me!

Rick James was my first ever tour with a major artist. His talent level was completely amazing! I was a big fan of his music before I got the chance to tour with him, but I never recognized the depth of his musicality until I got to perform on stage with him every night. As has been well documented, Mr. James did indeed enjoy having a good time. I remember one particular occasion he had gone out the night before a show and did not return to the hotel until the following morning. Since we had a show that night, I did not see how he would be able to give a quality performance in the condition he was obviously in. Rick proceeded to put on the absolute best show I had ever witnessed at a sold out Apollo Theater. It taught me quite a bit about rising to the occasion and giving everything you have to an audience. I will never forget being a part of such a magical moment at a legendary venue. 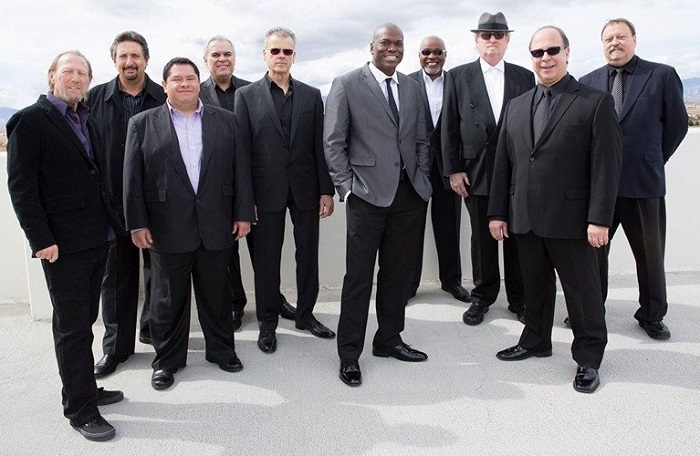 "I would wish for everyone that comes across the music of his or her choice, or art work, or film, would be dedicated to make sure all artists were fairly compensated for their works." (Photo: Ray with Tower Of Power)

Why did you think that the Tower Of Power music continues to generate such a devoted following?

Tower of Power has a very unique and special place in music history. The followers of the group caught on to the sound back in the day because it was so different from many of the genres of music prevalent at that time. The sound of the band has remained largely unchanged from what it was in the late 60's and 70's. The fans hold Tower of Power in the absolute highest esteem. I compare it to a worldwide legion of family members that want to shield and protect the group from being influenced by the goings and comings of the different sounds that seem to appear and disappear on a whim. There are four original members still playing in Tower of Power, so the fans who grew up listening to Tower of Power can relate to specific individuals that were present when they "discovered" the band. It's as if the followers of the music are transformed back to when they heard the band on the radio for the first time or bought the record when it first came out.

I am so appreciative of the contributions of artists such as Stevie Wonder, Chaka Khan, Nat Cole, Ella Fitzgerald, Marvin Gaye, Tina Turner, Ray Charles, etc., and all of the musical pioneers that came before these phenomenal musicians. However, I am aware that music changes, styles change, artists come and go, and demographic expectations are in a constant state of flux. What was special about many singers and musicians of past eras was that creativity and uniqueness was encouraged and nurtured. There are many performers today that I really like. I am a big fan of singers like Maxwell, Kem, Michael Kiwanuka, Aloe Blaque, Ledisi, Angie Stone, Erykah Badu, and so forth and so on. These artists are blazing their own trails and daring to be different in a culture that is not necessarily making it easy for them to be different. Technology and the internet have made it possible to search out these artists and to enjoy their contributions without the limits of commercial radio. There is a lot of great music "out there" if one is interested in dedicating the time to seeking it out and finding it. "I love the way music allows me to express myself. I enjoy interpreting songs and music because it allows me the ability to express and emote with the listener in a way that does not come naturally to me."

I would wish for everyone that comes across the music of his or her choice, or art work, or film, would be dedicated to make sure all artists were fairly compensated for their works. Creativity and are would be properly recognized as viable and necessary in our schools, homes and society at large.

I am a big fan of Bobby Womack and I was recently working with one of his road techs. He shared some amazing stories of being on the road with Mr. Womack that had me in stitches. Bobby sounded like such a different type of individual, who lived life on his own terms. He was a tremendous performer and songwriter, who, unfortunately, paid dearly for some of the life choices he made. But his talents and contributions to the music industry were uncompromised

I would want to go for a visit to each studio while some of the landmark records of our time were being recorded. I would want to be in the studio with B.B. King while he was recording "Thrill is Gone", with Marvin while he was recording "What's Going On" and "Here MY Dear". There are hundreds of hall of fame worthy moments I would like to be able to see and be a part of. I wish I could see Jimi Hendrix at Woodstock, the Beatles at Abbey Road and the Ed Sullivan Show, James Brown at the Apollo. 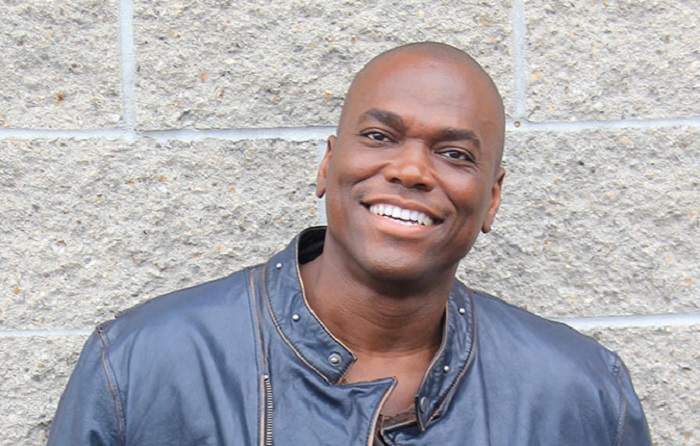