"The blues for me is the clearest conveyer of emotion next to classical. All heart ache and torture of a stolen race channeled through three chords."

Heymoonshaker are the unlikely pairing of two art forms that are decades apart; grit-your-teeth, raw, blues guitar and expansive, heart-pounding beat boxing. Urbanizing blues music for nearly 2 years, Andy Balcon and Dave Crowe are extremely talented at their craft but what impresses most and has made their commitment to beat box blues so successful is the indescribable chemistry these two performers. The musical sparring of Crowe’s powerful beats versus Andy’s possessed vocals forge together like two pieces of iron, creating an inspired piece of creativity and originality. 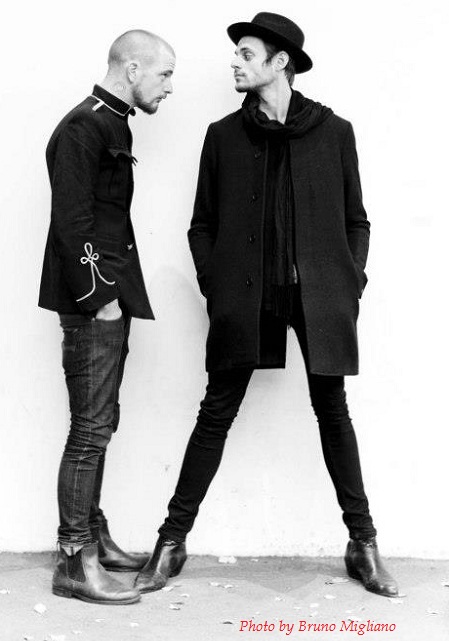 Heymoonshaker invited to support Ghostpoet and de la soul at Marseille’s Marsatac festival, with Rolling Stone magazine describing their performance as “dazzling!”. This sparked major interest in the band in France and over the past 12 months Heymoonshaker have appeared at some major French venues such as Bataclan in Paris where they supported Walk Off the Earth, and Le Divan Du Monde where they sold out their headline show in may this year.

Not surprisingly, Heymoonshaker’s unique and energetic take on the blues is snapped up by festivals around the world. In March 2013 Heymoonshaker released their first EP ‘Shakerism’. This extended 8 track EP contains songs from previous recordings and recent unreleased material, compiled to illustrate the journey of the band’s ever growing sound.

Heymoonshaker have amassed a huge YouTube following with their official YouTube channel at a staggering 18 million views. Recent music videos include ‘Bethany Darling’, ‘ten letter word’, and cream f feeling. Their latest and most powerful video ‘Colly Drop’ is scheduled for release this autumn.

Andy: For me the blues captures an emotion and through a story and a timbre so primitive, trance like, it shows you yourself or at least an understanding of something you feel as though you need to understand. I think this can be said for all music, but there’s something about the honesty. It’s real soul enchanting.  So yeah.

Dave: The blues for me is the clearest conveyer of emotion next to classical. All heart ache and torture of a stolen race channeled through three chords. Bravo. I look at the genre as the best foundation to write upon. Good grooves, great emotion and completely accommodating of improvisation; the three integral parts of music.

When was your first desire to become involved in Beatboxing? What are the secrets of?

Dave: The secrets are the secrets for a reason my friend. I first got inspired by a beatboxer called A-plus. The day after, I began but a while had passed till I took the art form seriously. But advise I can give. Relentless training is the key to success. 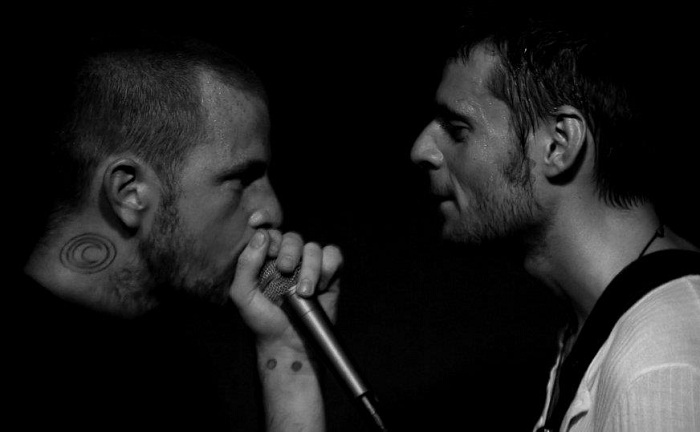 "The philosophy of HMS is to try and involve everyone in an environment to feel a certain way, with a positive perception." Heymoonshaker are Andy Balcon (Vocals/Guitar) and Dave Crowe (Mouth Percussion)

How do you describe Beatbox Blues and what characterize Dave Crowe music philosophy?

Dave: I describe it just like that. Beatbox blues. My philosophy is based on enjoyment. I am sometimes mocked for my thoughts and relationship with music, but I see it as a game, which is enhanced when your knowledge of it grows. Time is a musician’s best friend it seems. As your brain reads your passion day after day, slowly it realizes that it’s just a game and you really start to play.  Which to me is the downfall of good creation. Everybody is too serious. It’s just music, we are only musicians!

How do you describe Andy Balcon’s sound and what characterize Heymoonshaker philosophy?

Andy: Errr. It’s quite difficult to describe a sound. Err I guess a loud voice, and strutty guitar. The philosophy of HMS is to try and involve everyone in an environment to feel a certain way, with a positive perception.

Andy: Well I think it’s fair to say that the majority of today’s western music has in some way been inspired from what came from the blues. I guess there’s something tuned into our soul from the last 70 years.

Dave: It cries the tears for you. That is an everlasting friend. 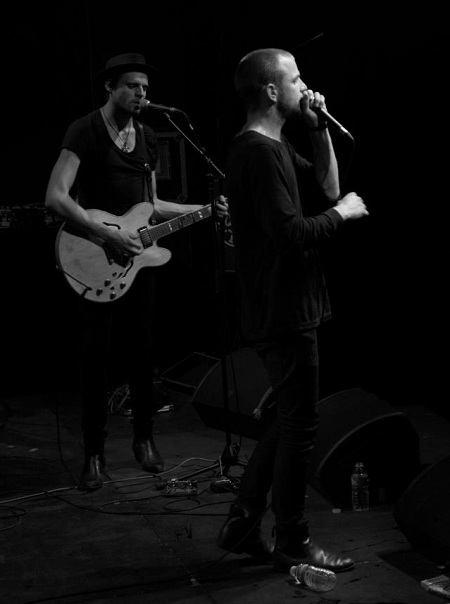 Andy: Best jam would have to be at the iron square in Goteborg (SW). I turned up one Friday night to perform on the street and met some music students who were also going to busk. Hampus, and Uluf were two of the guys. There was a third but I can’t remember his name. Yeah so there was a bari sax, tuba, drums and me on my beat up Martin guitar playing through a broken amp Crowe made out of a suitcase. There’s the recording floating around on soundcloud, its titled GBG horn jam. But yeah that was a great night. I was living in Sweden at this point and got myself into all kinds of places, some super Brat winde bars then in super dingy pizza shops, I’d play anywhere, so I’d pimp myself out for whatever I could get

Dave: My best jam, if I exclude Andy and Heymoonshaker simply because I have jammed with him for years so it’s an unresolved jam, I would say was in a bar in Melbourne, called George bar. I had a residency every Thursday on jam night. I got fed well, drunk and jammed for three hours straight with a sax, accordion and incredible guitarists. I was noticeably better in all aspects of playing week after week. And my darling girlfriend at the time sat through it all on looking with a smile. Really amazing stuff was played those evenings.

Which music meetings have been the most important experiences for you? Which memory makes you smile?

Andy: I cried the first time I had a guitar lesson. I’d never seen anybody play the guitar like that. It was upstairs in a council house in Upton, UK with dirty yellow walls and a bloke called Steve, who I am still waiting to see at my local pub back home The Boot And Shoe. When I turned up he was like “so… what do you want to play?” I said ACDC.
The next would probably be in France when I met Greg Simpson who had a residency at The Secret Bar in Les Deux Alpes. He told me I could play guitar for a job. Then it began. 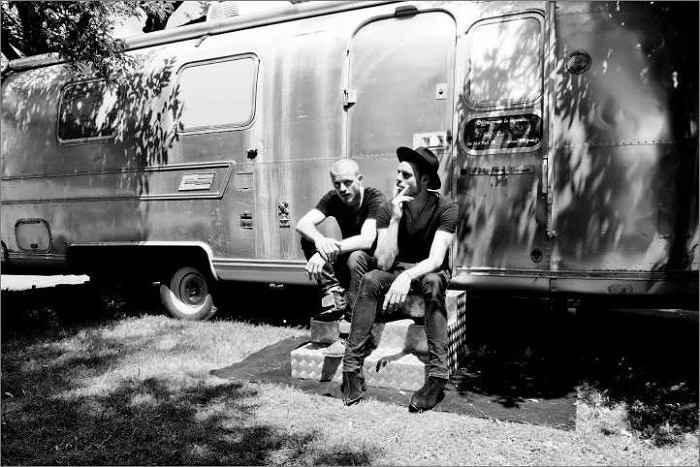 "The blues captures an emotion and through a story and a timbre so primitive, trance like, it shows you yourself or at least an understanding of something you feel as though you need to understand."

Are there any memories from buskin times on the roads which you’d like to share with us?

Andy: Hmm it’s hard to pick one out… Queenstown NZ was a cool place to work in the evenings, but then Duniden was also cool and a complete contrast as it didn’t have the sugar coated city vibe. It was very industrial! I was living on a beach there in my van and living off avocado banana and bread.

Dave: Being arrested and having my stuff confiscated in Venice. I played no more than two minutes, they came they took, and they proceeded to be complete caricatures of unjust Italian police, to the point where that same girlfriend was screaming at them for their crooked behavior. It was the sexiest thing I had ever seen. It cost 133 euros and they kept my stuff for 4 more days longer than agreed, leaving us penniless with no way of making money in a city that is over priced by a comical amount. Life’s cruel stench was thicker at that moment than ever. I learnt a lot about authority systems, people and myself. And it all came from making noises in the wrong place at the wrong time.

Andy: I think it’s a tricky question really… everything has its place and will later. What passes now will have its own place. I think that we are very fortunate nowadays with the internet and having the opportunity to reach an audience globally. It’s something really positive and will spur an even greater impact on creative. The trick is not allowing ourselves to be led astray my mass corporate organisations who have financial backing and basically control the air space on television and radio, at least now we can discover each other. Dave: I have no fears but many hopes. It will go how it goes; there is no stopping the inevitable evolutions of music, genres and styles, abilities and visions. I just hope I enjoy where it goes so I can keep playing with a smile. And I always want to be ahead of the curve. I miss the graft that musicians used to put in, the incredible abilities at such young ages, meaning that there first albums where instantly breathtaking. I think we are a little lazier these days. But then again, what do I know.

What are the lines that connect the legacy of Blues with Heymoonshaker music?

Which incident of music history you‘d like to be captured and illustrated in a painting with you?

Dave: I would like to be in a painting or photo of me jamming with Bobby McFerrin.

Dave: To the day of my death.