"I learned to express my feelings through the blues, and that playing music should be emotional. You have to look into your soul, notes are not enough."

Keith Airey:  I Wanna Tell You A Story

British guitarist Keith Airey is a top session musician who has played with many great artists including Tom Jones, Nick Kershaw, Roger Taylor, Roger Chapman, Colin Blunstone, Peter Cetera, Sir Paul McCartney, Gary Moore, Nigel Kennedy and the reformed version of The Zombies from 2001 to 2010. He was lead guitarist for the London stage show Mamma Mia! Vocalist/guitarist/songwriter Keith shared the stage and recorded with his own bands The Cosmic Thieves, or AIREYA 51. In the debut album “Crimson Tear” (2010) of AIREYA 51, includes his daughter Olivia Airey on bass, Steve Rodford on drums and his brother Don Airey guests on keyboards. 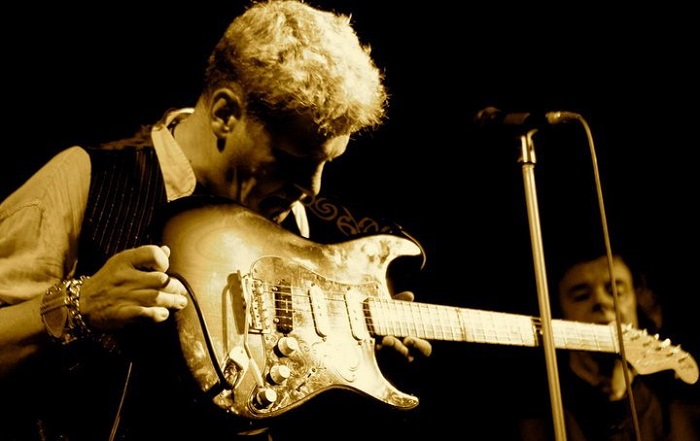 Bluesy Classic Rock with psychedelic ambience, haunting melodies and amazing exciting playing. The album sits somewhere between Lenny Kravitz and Pink Floyd and is influenced by Hendrix, Rory Gallagher, Peter Green and Robin Trower. It is in the main a power album but has some genuine softer tracks and also has some strong lyrical content especially "Crimson Tear" and "Long Hot Summer", detailing man's destruction of the earth and global warming. Keith's voice is unique and is a cross between rock and soul. This album highlights the many facets of Keith's various talents including the Blues Harp on "Another Dream". In the current time, Keith recording a new album with Olivia Airey, Steve Rodford and Kerry Gallagher.

Ever since I saw Hendrix play on the Film “Monterey Pop” and start of with “Rock Me Baby” I realized that the blues especially Guitar or Harp really affected me, emotionally. I learned to express my feelings through the blues, and that playing music should be emotional. You have to look into your soul, notes are not enough. 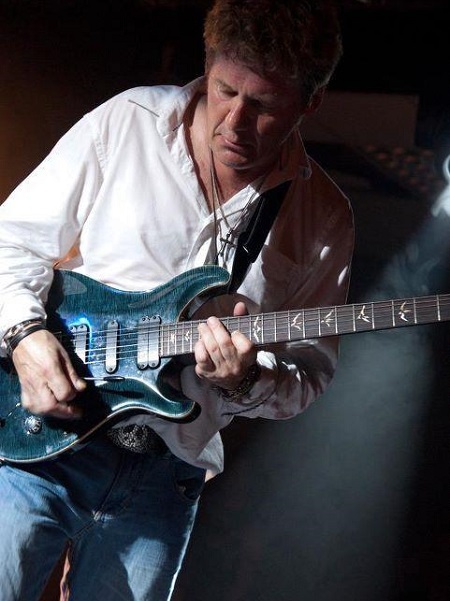 Playing with Nik Kershaw, especially at “Live Aid”, and playing with Tom Jones many times including a lot of blues. My own tune “Another Dream” my first song taught me to write from the heart, it is very bluesy.

My worst moment was being phoned up by Roger Taylor (Queen) to go on tour and I’d broken my arm 3 days earlier, that was a killer and he’s such a nice guy (as well as amazing).

"The Blues is where Jazz and Rock’n Roll come from. It’s a straight link."

How do you describe Keith Airey sound and what characterize your music philosophy?

When playing the blues, I use my SRV Strat. Rory Gallagher, Jimi and Robin Trower inspire my sound. Strat into a Tube Screamer, into a Marshall & Fender Blues deluxe. I love the acidy blues sound, Hendrix at Woodstock with Rory Gallagher thrown in. I use a Vox Wah and a Univbe at times. My music philosophy is, tell a story when you play, not just with the lyrics but with your guitar. Clapton’s solo on “Sunshine Of Your Love” says it all.

I also use a thick rock tone if needed, especially on a session. My old Kramer Stagemaster, or 10 year old PRS into a Marshall or H&K Tri-Amp. Saturated but not too much

Are there any memories from gigs, jams and studio sessions, which you’d like to share with us?

I’ve gigged in 41 countries over 30 odd years, so I have too many special memories. Playing Live Aid in 1985 would blow anyone’s head off,… it did mine. Jamming with Gary Moore at my brother’s wedding when I was young was also special, we played “Going Down”.

I did some recording with McCartney, which was scary. We were re-recording “Jet” for a TV session and we double tracked the guitar, Paul standing next to me with his Les Paul. We also used to jam and I’d play bass with Paul on guitar. Playing in Australia with Tom Jones in 1995, Tom would give me the stage for the encore, I’d do a big Eddie Van style solo, then bring in ”Are You Gonna Go My Way” 12,000 people screaming. The more I went for it, the bigger Tom’s smile was when he came back on stage. 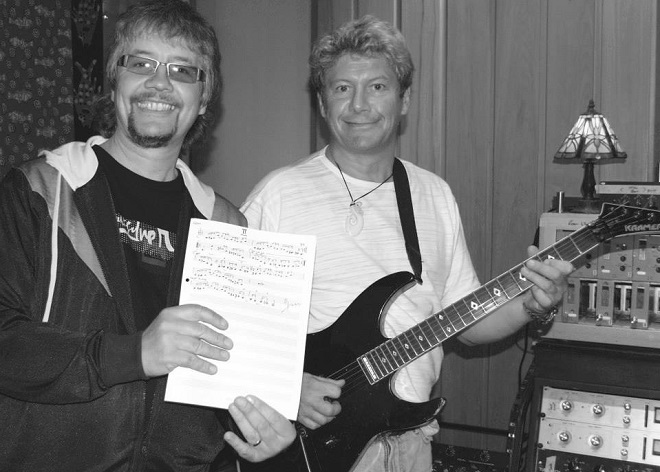 "The Blues is where Jazz and Rock’n Roll come from. It’s a straight link. Blues is what you start with to get to the other places but to this day, is no less valid." (Photo: Keith & Don Airey recording the "Long Road" on Don's solo album "All Out")

Having Don Airey as my elder brother was massive. Hanging out with Gary Moore when I was 20 was very important too. I learned all his early stuff, sat and jammed with him and even did a Collosseum II tour in his place when he joined Thin Lizzy back in 1979, steep learning curve.  Best advice was from my teacher at college Eric Kershaw, he said “I can show you what to learn, but you have to teach it yourself. 5 hours practice a day for 2 years and every gig you can lay your hands on”. I still practice and I still do every gig I can.

I attended a Flamenco Fiesta in Moron de La Frontera in Andalucia, Spain, 2011. A very small town.  A guitarist called Danny De Moron along with a band and Flamenco Singer/Dancer played such beautiful music that at the end, I completely broke down sobbing, I could hardly breathe, sobs of pure musical joy. Flamenco has been doing it’s version of the blues since Flamenco started and it is no less powerful than the Blues as we know it.

On the funny side, last year, I had to busk in Covent Garden London with Tom Jones for a TV show, it was hilarious. Tom was amazing as always but it made us all laugh, who gets to busk with Tom Jones!! 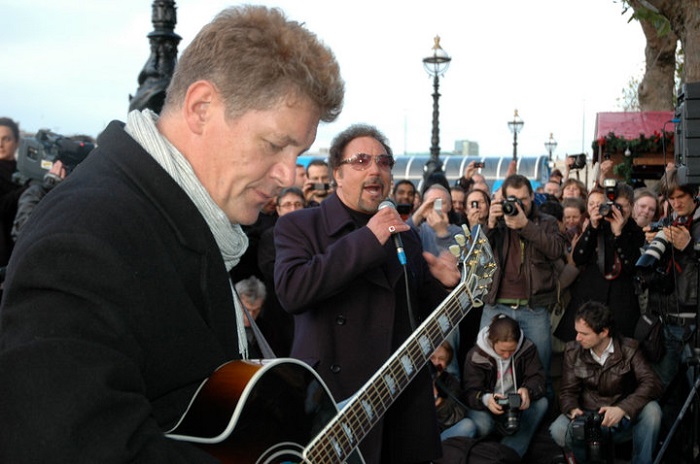 "I miss doing tracks live in the studio. Everything is so controlled now. I hate auto-tune, I hate click tracks, I hate over production. Everything from then sounds a whole lot better to me than music now, though there are exceptions." (Photo: Keith & Tom Jones, Covent Garden, London)

I miss doing tracks live in the studio. Everything is so controlled now. I hate auto-tune, I hate click tracks, I hate over production. Everything from then sounds a whole lot better to me than music now, though there are exceptions. The trouble with music now is you can get everything cheap or for free, so there’s no investment available for up and coming music/musicians. The X Factor has too much importance. However, a good live band is still the best. My brother Don is rocking around the world stadiums with Deep Purple, people still want that whether it’s Deep Purple, Stevie Wonder or Neil Young. Live music will never die!

In the UK, I would have many more venues for live music with government sponsorship. The music industry gives so much revenue to the British Government and they give us fuck all back. 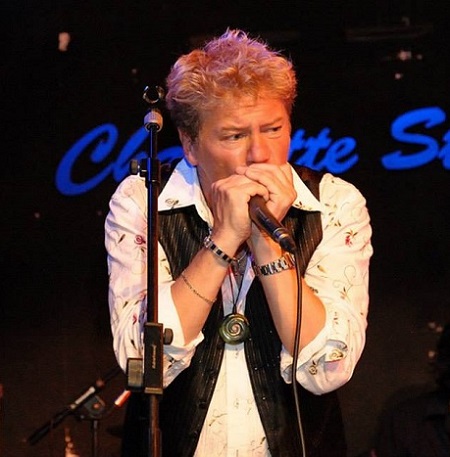 The Blues is where Jazz and Rock’n Roll come from. It’s a straight link. Blues is what you start with to get to the other places but to this day, is no less valid. BB King says it with one note. Hendrix in Machine Gun at the Fillmore at one point, plays a long wailing high 5th, 17th fret, top string, bent a tone up, it says everything in one note. All the music that followed mutated and progressed from it, and I’m glad it did!

What were the reasons that made the UK to be the center of Progressive Rock Blues searches and experiments?

Good question. Maybe the influence of European classical music from Bach onwards combined with progressive Jazz was something to do with it. If you want to play Rock in 7/4 with a jazz type chord sequences, you have to come up with something. A lot of the guys playing progressive rock were jazz or sometimes, classical musicians playing complicated music in the rock genre.

I remember Don (brother) telling me about playing to 400,000 people at the US festival with Ozzy, back in the 80’s in Brazil. That seems like a great day out. So, I’d take a trip to the past to a big festival somewhere in USA, late 80’s maybe. Of course, I’d be on the bill as well with Tom Jones. The back stage experience is as much fun as the gig.

Maybe a bill with Jeff Healey, Rory Gallagher, Joe Bonamassa, Sammy Hagar, Jimmy Barnes, Deep Purple, Gary Moore, Tom Jones (myself and Brian Monroney on guitars), Bonny Raitt, and any of the other legends. You get there early, have a few beers, do some practice, hang out with the other guys. I wish I’d met Jeff Healey by the way.

That is what I’d do for a whole day. 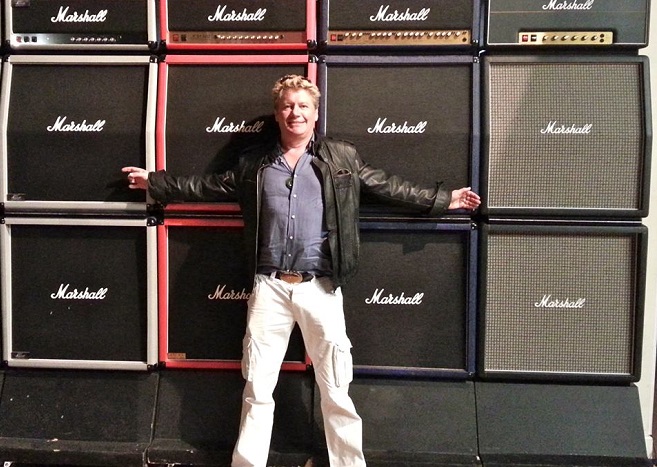