"Everything really stems back to the blues in some shape or form."

Simon McBride started playing the guitar when he was ten. By age 15 and entirely self-taught, he was good enough to enter Guitarist Magazine’s Young Guitarist of The Year, a performance competition staged at Wembley Conference Centre, which he won against strong competition. Even before that achievement, Simon was endorsed by the notable American guitar builder Paul Reed Smith, a relationship that continues to this day.  Observers of the blues-rock scene are calling Simon McBride the natural heir to Rory Gallagher and Gary Moore. Like these icons he hails from Ireland and from Moore’s hometown, Belfast. 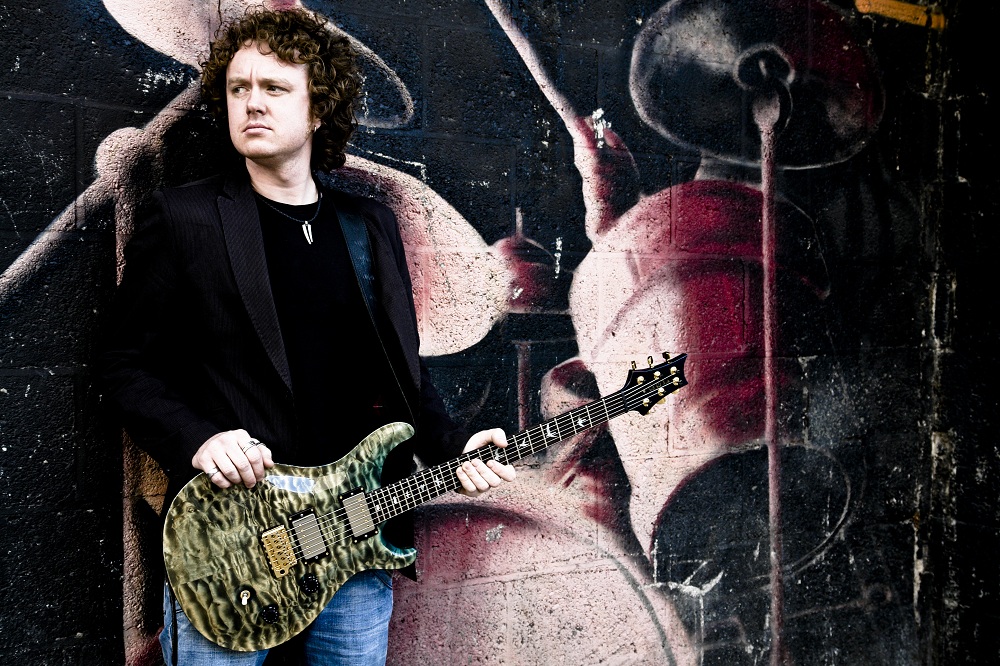 He is an astoundingly good guitarist, a fine singer and a prolific songwriter. His first professional job – at age 16 – took him into heavy metal territory with the Belfast-based pioneering metal band Sweet Savage, who reformed in 1994 without their founding guitarist, Vivian Campbell, who Simon replaced. After leaving Sweet Savage in 1998, He joined fellow Irishman Andrew Strong, who had made his name in the 1991 cult film The Commitments and went on to a successful singing career. He spent six years touring with Strong before leaving to pursue the idea of a solo career. Simon then spent several years playing with bands local to Belfast while writing songs and honing his production skills. In 2008 Simon approached Nugene – notable for handling guitarists and blues artists – with a collection of songs that became his debut album, Rich Man Falling. The band was targeted initially at continental Europe and with representation by Live Nation in the Netherlands Simon played major festivals. In the UK he has supported Jeff Beck, Joe Bonamassa, Joe Satriani and Derek Trucks. Then followed a second album Since Then. In support of the album Simon toured the UK opening for guitar legend Joe Satriani and earned rave reviews for his performances. In 2012 he released Nine Lives, an album of mostly live recordings proving that on stage he can make a sound every bit as good as his studio albums. Simon, when was your first desire to become involved in the music & who were your first idols?
I was ten years old when I first wanted to play guitar, i was listening to Joe Satriani, Gary Moore, Thin Lizzy, ACDC and people like that.

What was the first gig you ever went to & what were the first songs you learned?
My first ever gig I went to see was Gary Moore, I was 13.. It was an awesome experience. The first riffs I ever learnt where ACDC ‘If you want blood’ and Bryan Adams ‘kids wanna rock’ I then progressed on to learning nearly everything that Satriani ever played and i also learnt some Van Halen stuff.... 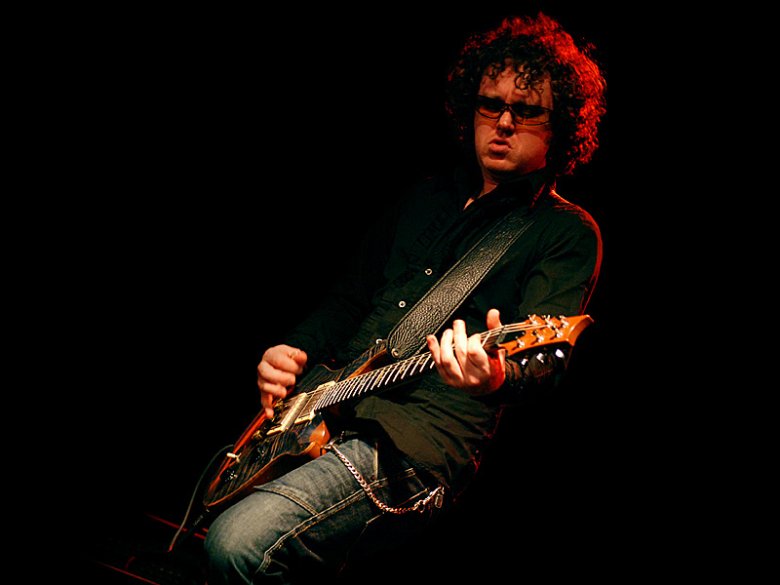 How/where do you get inspiration for your songs & who were your mentors in songwriting?
Inspiration for my best songs comes at the most weird times. It usually happens when I’m in a hurry to get out the door to catch a plane or something, so then I am scrambling to find some paper and a recording device to get at least the idea down. Most of my songs lyrically are about my own personal experiences in life, I don’t know how to write lyrics any other way. I have lots of mentors when it comes to songwriting, basically anyone who wrote great songs, I love the way Free/ Bad Company wrote songs and also Hendrix because he was melodic and unique.

Would you like to tell something about making this new album “Nine Lives”? Where did you get that idea?
I got the idea from actually watching some videos on YouTube of my band playing various gigs. It sounded so different to the records I have put out, it sounded to me much more electric and on fire, and we were playing right to the edge on some songs. So I wanted to try and capture that experience on CD. We recorded a whole UK tour in 2011. That gave us the freedom to just play the way we usually do and then pick the recordings that sounded best, especially as some rooms can sound great and others not so good. Which of historical music personalities would you like to meet? From whom have you have learned the most secrets about the blues rock music?
There is one guy unfortunately I will never meet, Gary Moore. He was born 10 miles away from me and I have never met him. I would love to sit down with him and just to jam with him. Jimi Hendrix is another, just to ask him how he came up with all those cool ideas. I would love a guitar lesson from Jeff Beck, that guy is a genius!! They are all leaders in my eyes.

Which was the best moment of your career and which was the worst?
I have a lot of great moments from my career, but the most recent one was playing black dog with Ian Paice and Don Airey last year...it was very cool. Fortunately I have not yet had a worst moment my career!

What are some of the most memorable gigs and jams you've had? Which is the funniest story from those?
The most memorable gig i did was playing with Andrew Strong in Denmark to 60,000 people...very scary. The best jam I ever had was with TM Stevens and Zoro, it was a full 40 min set of just a jam, no rehearsals or anything. 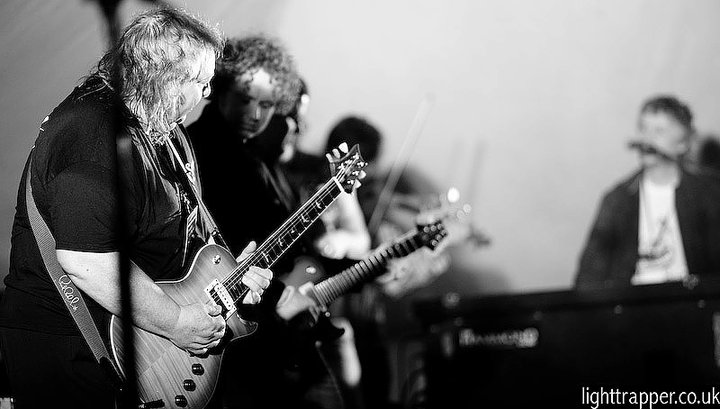 What are you thinking when you guys are on stage, how would you describe your contact to people when you are on stage?
On stage we just go into a world which I can’t describe, we just lose ourselves in the music completely. We would start the gig and before we know it, the gigs over and we are left saying ‘is that it!!!’ I guess people respond to the energy and excitement coming from us, I believe if the band is having a good time then so will the people. 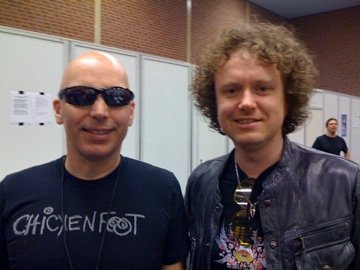 You have open act with many artists. It must be hard, but which gigs have been the biggest experiences for you? And why?
The biggest deal for me was doing the Joe Satriani tour because ever since I was a kid I have been a huge fan of Satch. So it was like a dream come true for me. If you would have told me when I was 13 I would be touring with Satriani I would have fell of my seat laughing.

Do you know why the sound of PRS guitar is connected to the great musicians? What are the secrets of PRS guitar?
It’s quite simple; PRS guitars are just perfect in every way. Paul is a master of tone, he is constantly trying to improve the guitars all the time. Most guitar manufacturers get lazy and just settle on their existing models. Every time I meet Paul he always has a new idea about something to do with his guitars or amps,  and is not afraid to put his ideas into production.

Some music styles can be fads but the blues is always with us.  Why do think that is? Give one wish for the BLUES
The blues I feel is in all types of music. Everything really stems back to the blues in some shape or form. I think it’s the only really true way of expressing yourself on your instrument, there are no boundaries, and people will always need to express themselves. Don’t get me wrong you can do it with other types of music, but the blues is always re-inventing itself so it keeps it fresh.

What characterize the philosophy of McBride’ sound?
Basically I have no idea, I have my influences like everyone else does but I just pick up the guitar and just play what I feel, I don’t try to be like anyone else, I just play from the heart.

How do your Celtic roots come out of the music and your songs?
I have always loved the Irish music and Scottish music; I love the sound of the ulilleann pipes.  It’s a hard style to music to mix in the blues rock music, so I try to put small influences in just now and again. The track ‘The Truth ‘which is on my album ‘Since Then’, is kinda like an Irish type song with a drone and a guitar. It’s funny how people compare me to Rory Gallagher. To be honest, I have listened to him a lot but he has never really been an influence on my playing. I guess there must be something in the Irish blood that makes us sound similar.