"Blues is like the roots of a big music tree. When the modern music beyond 20th century exists blues also exists with them." 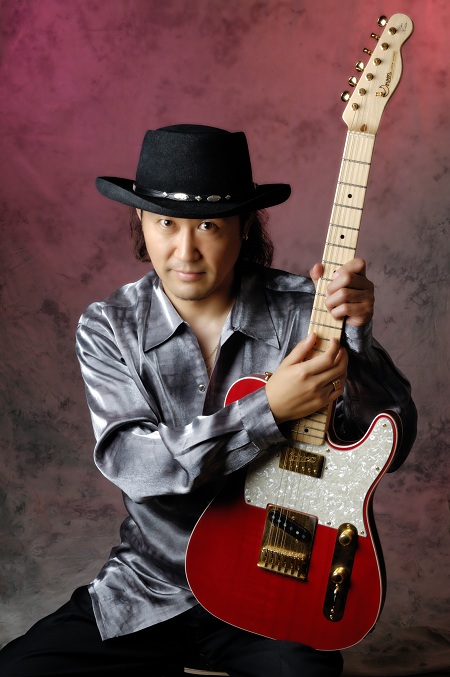 Shun has recorded several his own albums such as "Rising Shun" (2007) and also appeared on many albums as a guitarist includes Koko Taylor's Grammy Awards nominated "Old School (2007)". Shun has appeared on many TV shows and news including PBS "An evening with B.B. King" (2003) as a band leader and performed with Mr. King. After this session Mr. King called Shun as "Light (skin colored) B.B. King". Shun also appeared on Kennedy Center Honors (2008) to honor Morgan Freeman performing with Koko Taylor, Pinetop Perkins, Honeyboy Edwards and Willie "Big Eye" Smith. Also appeared on "Father and Sons", a part of the seven series of "THE BLUES" movie directed by Martin Scorsese, Clint Eastwood and 5 other directors. Shun's new CD "Best of Shun's Blues" will be released this month from King Records, features Junior Wells, Otis Rush, Koko Taylor, J.W.Williams, Billy Branch, Eddie Shaw, Makoto Ayukawa and many other great musicians.

Shun: Blues is my music home. I spend over 20 years in Chicago playing and living with blues that made a deep and solid music foundation in me. Also blues is my love and joy that I still enjoy playing and listening a lot. I’m glad I met blues. I can enjoy it rest of my life.

Shun: My first paying gig was at Rosa’s Lounge in Chicago with legendary Louis Myers’s Band in 1990. I was pretty nervous man. Louis was yelling at me on some songs that he wanted me to play the rhythm guitar in certain ways. I was kinda freaked out but learned a lot from him. Shun: This is a hard question. Be honest with you I don’t know. I just kept playing and writing and I enjoy doing them! Maybe love and respect of blues took me to some good places.

How do you describe Shun Kikuta’s sound and progress, what is your music philosophy?

Shun: Blues is the strongest influence and the base of my sound for no doubt. At the same time I was actually playing classical, folk, hard rock and some jazz/fusions about 10 years before I really started playing blues. So my ultimate goal is to put all essences of music that stays in me together to create Shun’s sound and music.

Shun: I can’t pick one musician for this. Because I learned so much from so many great musicians, you know? For example Junior Wells told me to play my own SHIT then Koko Taylor wanted me to go deep inside and squeeze out my blues with gutsy bending of the strings. Soul legend, Otis Clay taught me of the importance of the sure and tight groovy rhythm playing called POCKET.

Shun: The best moment would be a show «Evening with B.B. King» that I played with B.B. King on Oct 23rd, 2003. B.B. King was my first and one of the most influential musicians in my whole career. I hooked up with the blues when I heard B.B’s «Live at Regal» when I was 19. It means so much to play with B.B because of it.

I don’t have any worst moment man. I’ve been so blessed my entire career to I’ve been gone through some ups and downs. 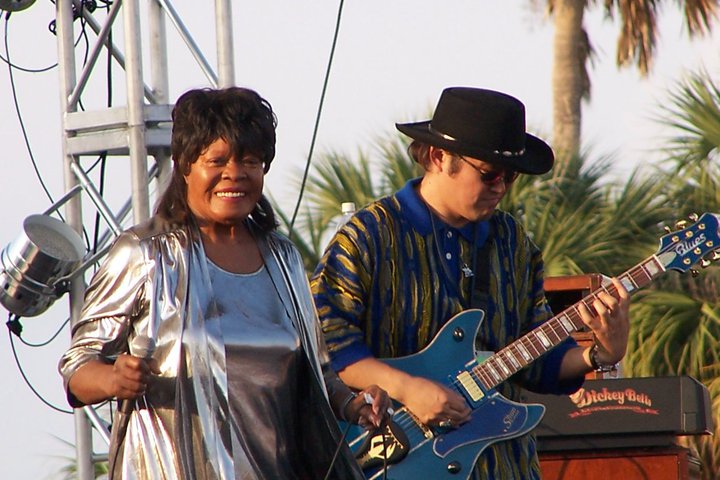 Shun and Koko Taylor on stage. Photo by Gary Keith

What is the “feel” you miss from Koko Taylor? Which memory from her makes you smile?

Shun: I and Koko were like own mom and son. We used to call each other ‘mama’ and ‘my Shun’. I  still miss her man. And I always will miss her like your own mother.  I have so many memories with Koko but one particular thing I liked was when I asked Koko ‘how you feel mama?’ then she would say ‘ I feel like James Brown’ which means she feels GOOD.

Do you remember anything interesting from Koko Taylor’s tours and your meet with Martin Scorsese and Clint Eastwood?

Shun: So many interesting memories, one typical Koko’s motto on the road was when we were at the airport being ready for the trip she would say ‘I can’t stand staying home and I’m so glad that we can get out’. Then a couple of days later she would say ‘I can’t wait to go home. It ain’t no place like home, you know’.

I met Clint Eastwood at Kennedy Center honors in Dec, 2008. He introduced me as ‘Shogun of the blues’ to the audience with many celebs includes the president George Bush. We chatted at the dressing room a bit. He is a very nice man and loves blues a lot.

I never met Martin Scorsese because he was not there when they filmed us for THE BLUES movie. I wish I’ll meet him one day.

Shun: absolutely in my Chicago years between 1990 to 2010.  I had a chance to play 4,5,6 nights a week constantly and I have traveled to the world. I had so much fun playing with a lot of great musicians and we became good friends. Unforgettable memories. 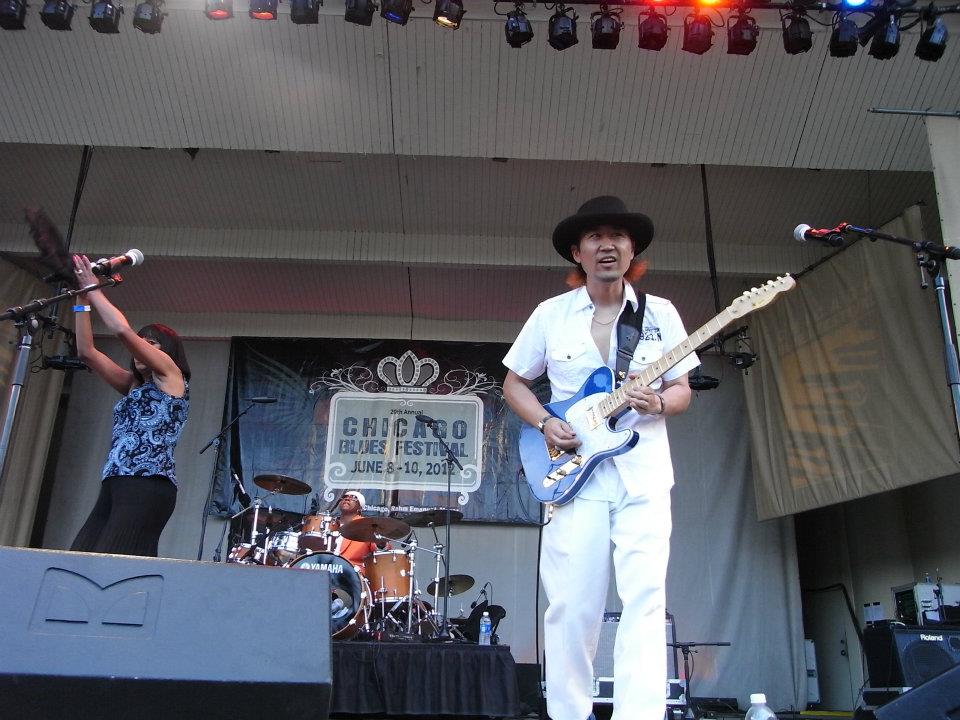 Shun: Chicago blues still has a lot of powers and energies because it has been inherited by younger generations with adding some new trend sounds. The music continues being current. That’s important because when the art stays in one style it loses the power then dies out.

Shun: Well, go out to attend jam sessions and meeting musicians as much as you can. Make sure you have business cards in your pocket. Learn as many blues songs and styles of playing. When you play with the band you wanna listen to other guys carefully then fill in the missing spaces. Play the solid rhythms and step up to do your thing when your solo comes.

Shun: I have mentioned earlier about a show «Evening with B.B. King» that I played with B.B. King on Oct 23rd, 2003. I was selected as a band leader for the event and I played with Mr. King. After the show he told me "you are a very good guitarist and you are light (skinned) B.B. king". Mr. King was a very nice person and he encouraged me a lot. Since the event we came cross the same shows once in a while and he always remembered me. One day he even told his family how good I play the guitar. I was so honored and lifted. 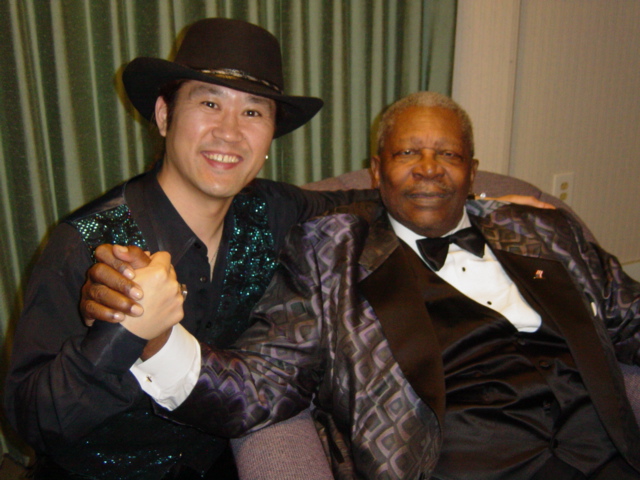 I played with Mr. King. After the show he told me "you are a very good guitarist and you are light (skinned) B.B. king" (Shun and B.B. King)

You have recorded and appeared live with many bluesmen. Which gigs have been the biggest experiences for you?

Shun: Like I mentioned, «Evening with B.B. King» was the best one for me so far. I also have mentioned the reason earlier.

Shun: Blues is the fact. It has the truth in it. Blues also has been inherited over 100 years by so many musicians and audiences. Blues is like the roots of a big music tree.  When the modern music beyond 20th century exists blues also exists with them.

Shun: I would say Junior Wells’ advices.  1) Play your own SHIT. 2) You’ve got to sing to be a bluesman. 3) Don’t play for yourself. Play for the band and people. 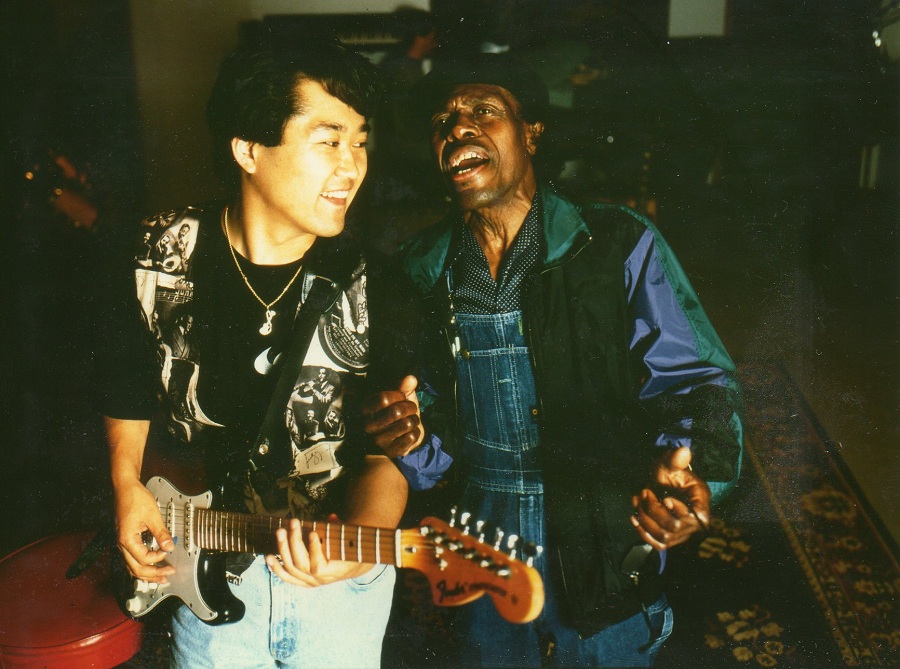 Which things do you prefer to do in your free time? What is your BLUES DREAM? Happiness is……

Shun: I just relax with my wife. We’d go out for a dinner, pray together and simple things like that.

I will have a band called “Shun Kikuta & Legend of Rockers” begins 2013. We play blues rock on this project and I’ll also have a plan to have a new blues band as well. I’d like to challenge to grow up as a musician. I’ve been also writing songs as well. Putting all music essences in me together and create something my own. That’s my ultimate goal. Same time, I’d like to keep traveling all over the world to share the greatness of blues and joy of music with people. I hope I’ll live long enough to see my dreams being fulfilled.

When it all began for the blues in Japan, who is considered the local "godfather" of the blues?

Shun: Blues has been introduced in Japan since early 70’s. There are many talented blues musicians there as well. I admire Mr. Fusanosuke Kondo, Mr. Atsuki Kimura and Yukadan, West Road Blues Band, Mr. Ryuichiro Seno, I mentioned just a few, as pioneers of Japanese blues. They are still active and influencing younger musicians.

Make an account for the case of the blues in Japan. Which is the most interesting period in local blues scene and why?

Shun: Absolutely now. Because blues has been spreading out like the grass roots and been played by younger generations more than ever.  I also teach many young guitarists and all love to learn the blues style. Nowadays you can access many blues on YouTube. That helps to spread blues even faster. 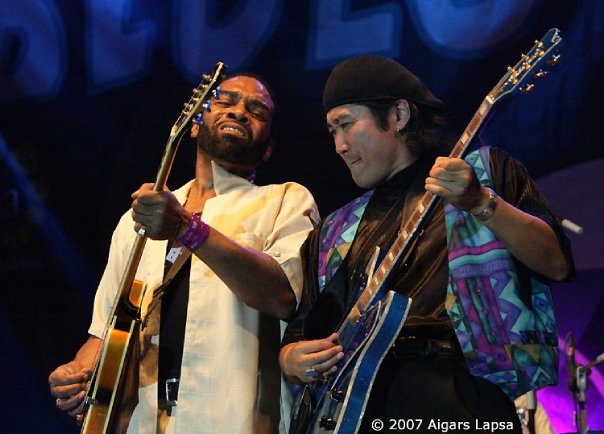 Shun and Vino Louden in Spain. Photo by Aigars Lapsa