Keith Stone is back with his highly anticipated second release, "Blues With A Taste Of New Orleans" out September 10, but this time he’s teamed up with Red Gravy, made up of three of the most well-respected musicians to call New Orleans home. This band delivers ten songs of original, tasteful blues, all run through the New Orleans cookbook of funk and R&B to create an exotic and spicy musical dish, but here in the Crescent City, it’s all home cookin’.

Keith Stone with Red Gravy come by the name the same way Keith’s Sicilian mama cooked up her beloved sauce: by carefully simmering New Orleans spices and spirit. The new album works the same way. Drawing from the sounds of the city that gave us Earl King, guitar Slim, Professor Longhair and Dr. John, the band pays homage to these pioneers of New Orleans Blues while carving out an identity all its own. Longtime friends Jimmy Carpenter and Brent Johnson dropped in to lend their talents and love for all things New Orleans. There are cities, regions, and neighborhoods all over the country that can lay some claim to “the blues.” That’s all fine and good, but Keith Stone with Red Gravy is damned certain that the blues that comes out of New Orleans is the best, most unique and funkiest there’s ever been. Listen to the album and you’ll agree. 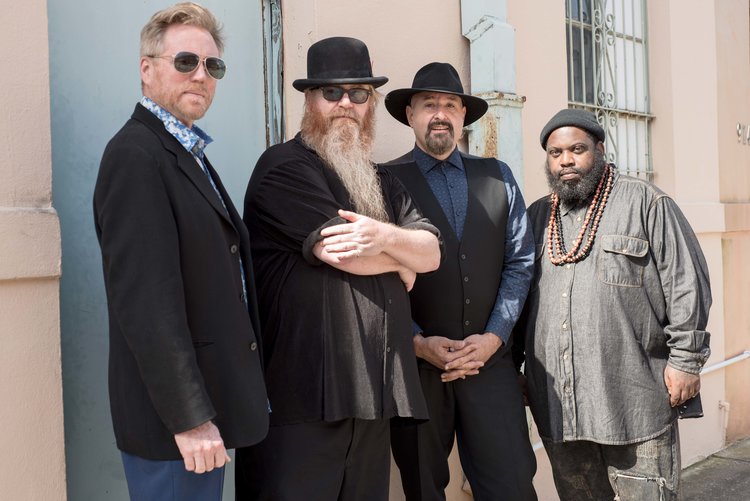 Keith Stone: Musically New Orleans is known for Pianists, Horn players, and Drummers. Champion Jack Dupree, Dr. John, Professor Longhair, Fats Domino, and Allen Toussaint are not only from New Orleans but each one is an inductee in the Blues Hall of Fame. It’s also a city known for Brass bands and Second-Lines. This fostered an evolution of the Blues as it reached the city. Basic chord progressions are enhanced representing of the instrumentation at hand. Put it all together and you get Blues that has a different flavor than anywhere on the planet. We wrote the song “Something in the Water” because so many people come here and experience our musical sub-culture and never leave.

A band like Red Gravy is unique to our city and the blues because we’re a hybrid. Eddie and I are native New Olreanians who grew up in the music culture of the city, Tom has lived here for so long he’s become an authority on New Orleans piano styles, and Kennan has a long history in New Orleans and brings the fundamental elements of all styles of the Blues to the table. In my biased opinion, that makes us pretty damn spicy and unique.

Tom Worrell: I first met Keith at a memorial for a mutual musician friend in 2016. In New Orleans, when you have a memorial for a musician, everybody brings their gear and we jam. It was there that we both felt a connection. But it was one year later when I met Kennan at a rehearsal for a band he and Keith had together, that things started to click. That August Keith and Kennan hired Eddie and myself for a tour on the gulf coast and that’s when everything hit.
I had worked with Eddie on several Mardi Grass Indian gigs and knew him as the consummate New Orleans Drummer. By the time hit the stage for the 3rd show of the tour, we all knew this was something special: Electric Blues and New Orleans Piano on a foundation of Crescent City Rhythms. By the time we got back to New Orleans, we were a band with a plan to release an album of original material that stood on the shoulders of those who have come before us. It’s all about celebrating the sound of the city; the rhythms, the feel, the language of the Crescent City. It’s our way of honoring those who’ve influenced us.

Eddie Christmas: Truth is, we laugh a lot. As a band made up of sidemen, we’ve all had good and bad “bosses.” Getting to make all the musical decisions ourselves is a lot of fun! We’re all like kids locked in the candy store!

Kennan Shaw: There’s no place like it in the world. Lot’s of other places claim to be music scenes, and they may be okay, but New Orleans has more gigs than anywhere else. And yes, there are a lot of musicians, but the camaraderie, the sense of community, and the level of respect musicians are accorded far outstrips anywhere else. A lot of New Orleans musicians don’t believe that, but as someone who chose to come here, I can tell you it’s true. If you don’t believe me, try this simple test. Google how many songs are written about the city you think is better. Then Google how many songs there are about New Orleans.